101 Best Japanese Snake Tattoo Ideas You Have To See To Believe! 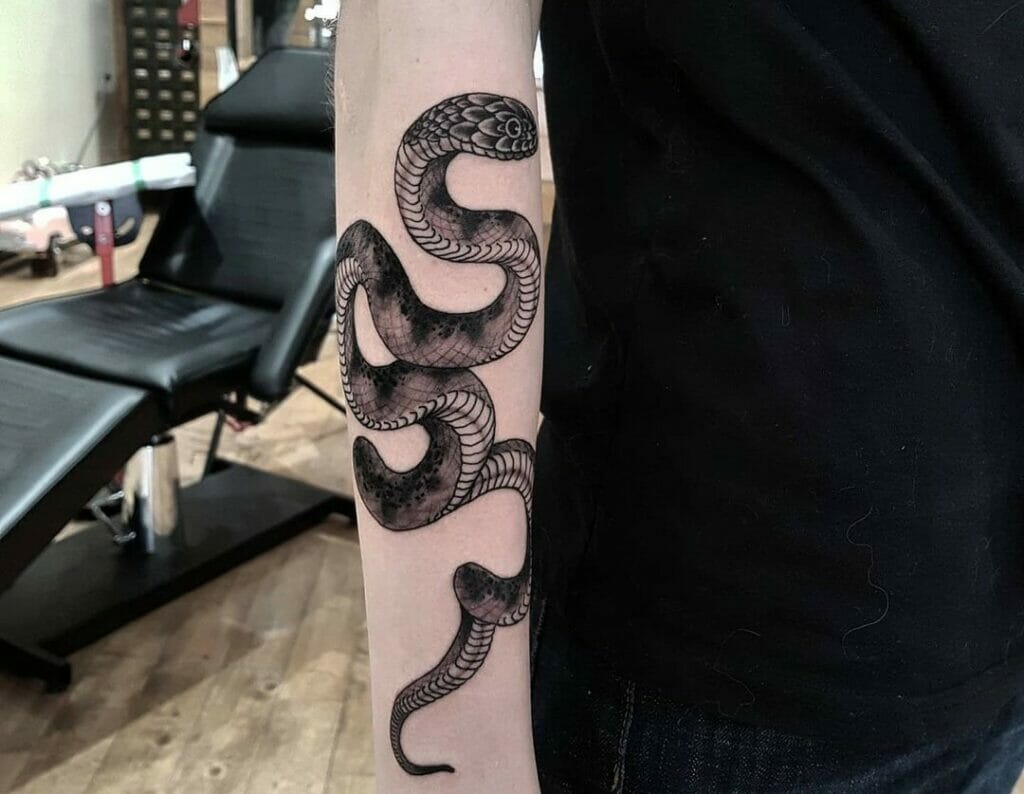 Suppose you are feeling a strong urge to ink Japanese tattoo designs on your body, no worries! You can choose the best Japanese snake tattoos from the list!

Many Japanese tattoos have an eye-pleasing and aesthetic design along with an intimidating centrepiece, vibrant colours, splendid outlines, deep symbolism and traditional Japanese art.

Out of all the traditional Japanese tattoos in the 21st Century, one of the most popular styles is none other than Japanese snake tattoos. This Japanese style tattoo has varieties of tattoo ideas that attract a lot of tattoo aficionados.

The term Hebi means snake. Primarily, there are three types of venomous snakes in Japan, the mamushi snake, the habu snake and the Japanese keelback snake. In traditional Japanese folklore, Snakes symbolise rebirth, fertility, healing, fortune and power. The concept of reincarnation originated from the fact that a snake sheds its skin. The reason for shedding its skin is to get eternal life, in a metaphorical sense.

In ancient Japan, snakes were mostly considered a very bad omen. It was believed that when you encounter a dead snake floating in the water and then it suddenly disappears, there will be torrential rain and flood. But in some cases, it was considered as a symbol of good luck too. Moreover, there were many such beliefs that encountering snakes are associated with things like to kidnap children. Thus, you can try out these amazing Japanese snake tattoo ideas to show your love and respect for the supremacy of Japanese traditions.

During World War ii, the concept of tattoos was stigmatised to the point until it became banned. The reason for getting banned is because these Japanese traditional tattoos are associated with crime and other heinous activities by a group of crime syndicates known as Yakuza, the Japanese word for a Japanese mafia group.

Hence, without any further ado, check out this curated list of one of the best Japanese Snake Tattoos to explore the best from the rest!

You can ink this Japanese snake tattoo in most areas of your skin as a chest tattoo, shoulder tattoo, hand tattoo, back tattoo or full-body tattoo as well. You can also take inspiration from other snake tattoos.

Elevate your style quotient by tattooing this vibrant Japanese snake tattoo. However, a snake has a negative connotation in society because it is pretty common that you fear snakes primarily because of their venom and agility. There are many traditional Japanese tattoos that got their ideas from snakes. These tattoos are one of the best Irezumi tattoos because of the high-quality ink which the tattoo artist uses.

This multi-element Japanese traditional tattoo will attract a lot of people who tend to love eagles, skulls, and many other objects because you can observe many objects within a single Japanese snake tattoo design. Moreover, the elements have a lot of deep meaning.

Firstly, an eagle is generally thought to have been a symbol of good health. However, it makes sense because eagles are majestic and optimistic creatures. There are many other elements like a spider web and a spider that might contradict the thought of the eagle. Snakes, in turn, represents long life and good fortune that adds up another optimistic factor to this Japanese snake tattoo.

If you take note, you’ll find that there are many elements that have the ability to ward off evil spirits. Once upon a time, there used to be a rumour that in the Japanese imperial household, children were kidnapped soon after they encountered a snake. You can ink this Japanese snake tattoo as a full-body tattoo. Now coming to its design, it has a very simple outlook which gives a whole new touch to this tattoo. Japanese Snake tattoos are generally loved by men and women of young or middle age groups.

Delve deep into the world of intimidating creatures and other Japanese myths by tattooing this menacing Japanese snake tattoo. Cobras have a very militant symbolism in Japan. They symbolise agility and regeneration. Inking this Japanese tattoo will boost your morale in a drastic way.

This Japanese tattoo has a very sketchy outline with fine strokes and borders, adding a lot of simplicity to the design. These Japanese tattoo snake ideas are emerging day by day, gradually getting popular amongst tattoo artists from all over the world. Since the Cobra covers the whole chest, this tattoo can be considered a full-body tattoo. You can add other mythological creatures as the centrepiece, like dragons or Phoenix. Since dragons have pointed ears, the tattoo design will look more unique.

Carry yourself with grace and beauty by tattooing these beautiful Japanese serpent tattoos. These Japanese tattoos create a very balancing amalgamation of ideas. It is because there are two very opposite elements, that is, snakes and peonies. Since snakes are a symbol of fertility and regeneration, whereas peonies represent good luck, this Japanese snake tattoo adds a lot of positive charm.

If you are a fan of Yakuza style tattoo designs, these Japanese tattoos are suitable ones to rely upon. This full sleeve Japanese snake tattoo has a very vivid ink that intensifies the appearance of this Japanese style snake tattoo. Since Yakuza is considered a negative name in terms of social status, they face lots of social obstacles. Moreover, they also tend to face rejections from normal people in Japan for their bizarre appearance. But if you really would want to stand out from the rest, you need to be unique and unusual.

Similarly, in our day to day lives, we can also notice that there are times that an unusual person will have a lot of impact on everyone’s lives, either in terms of creativity or in terms of social status. Tattoo artists have got lots of inspiration from Yakuza to create some masterpiece Japanese tattoos.

Glorify the culture of Japan by inking this simple yet aesthetic Japanese snake tattoo. This back piece tattoo has a very small centrepiece that will bedazzle you to its fullest. In spite of the fact that this Japanese snake tattoo is small, this tattoo has a very beautiful supporting object, that is, flowers. These red flowers create a very vibrant outlook on the overall design. Thus, by keeping these primary things in mind, you can also opt for other tattoo ideas like full sleeve tattoo, half sleeve tattoo, chest tattoo, leg tattoo, arm sleeve tattoo, and many more. These tattoos will suit well on both men and women.

Elevate your style statement by inking this beautiful looking Irezumi outline tattoo is the simplest of tattoo designs. If you love to sketch, this snake tattoo will grab your attention to its fullest. Although there’s a misconception that tattoos need to be bold in terms of inking, but this isn’t the case always. This sketchy outline tattoo also looks simple yet beautiful because of the finesse in the details.

What is a Japanese snake tattoo?

A Japanese snake tattoo is a traditional style of tattooing featuring a snake, which is often seen in Eastern cultures as a symbol of wisdom, power and protection. The design typically includes intricate line work with vibrant colors and often incorporates other symbols, such as dragons or samurai swords to add further meaning to the piece. Snake tattoos can range from simple to more complex designs, and they can be placed anywhere on the body to create a unique and meaningful tattoo. Japanese snake tattoos are often seen as spiritual guardians to the wearer, providing them with protection and guidance through life’s challenges. They also represent strength and resilience in times of hardship. In addition to their symbolic meaning, these tattoos have become popular for their aesthetic beauty, as they are often brightly colored and intricate. Whether you’re looking to convey a deeper meaning or just add some color to your look, Japanese snake tattoos are sure to make an impact.

What does a Japanese snake tattoo represent?

A Japanese snake tattoo typically represents wisdom, power, protection and resilience. In Eastern cultures, the snake is seen as a spiritual guardian, protecting and shielding its wearer from danger. Additionally, it can represent strength and perseverance in times of hardship. The intricate line work and vibrant colors often present in these tattoos further symbolize beauty and creativity.

What are the different types of Japanese snake tattoos?

Japanese snake tattoos come in a variety of designs, ranging from simple to more intricate. Some popular styles include traditional Japanese dragons, koi fish and samurai swords. There are also designs that feature multiple snakes intertwined together in different colors and patterns. The placement of these tattoos can vary as well, with some being placed on the arms, back or chest. No matter what type of design you choose, a Japanese snake tattoo is sure to be eye-catching and meaningful.

What are some common Japanese snake tattoo designs?

Common Japanese snake tattoo designs include traditional Eastern dragons, koi fish and samurai swords. These designs often feature intricate line work and vibrant colors to give them a unique look. Other popular designs include multiple snakes intertwined together in different colors and patterns. Some also incorporate other symbols such as lotus flowers or cherry blossoms to add further meaning to the piece. Regardless of the design you choose, these tattoos are sure to stand out and make a lasting impression.