10 Best Snake And Rose Tattoo Ideas You Have To See To Believe! 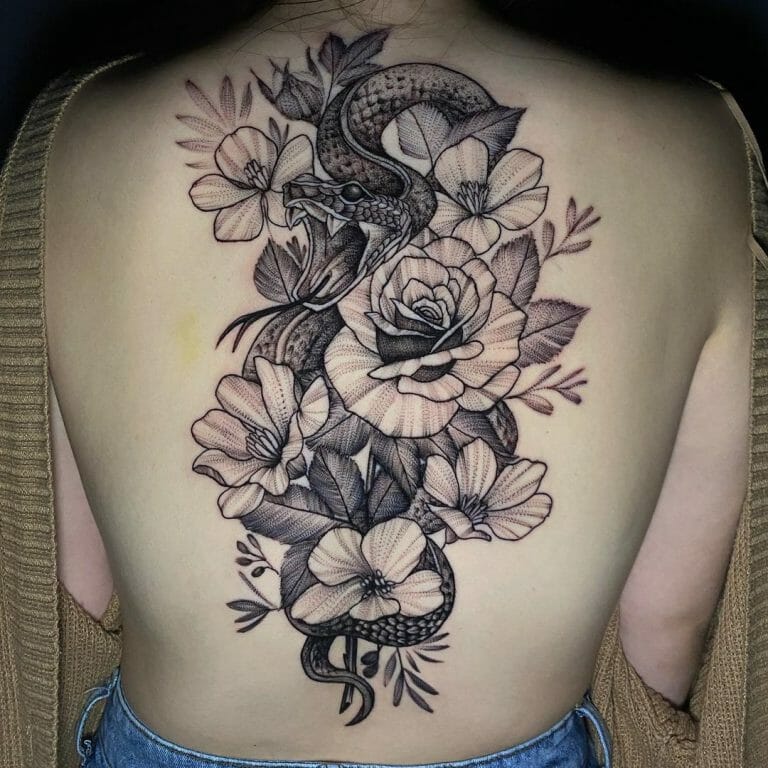 Want to look unique in a snake and rose tattoo? Let’s take a look at the top 10 coolest ideas for your new tattoo! A snake and rose tattoo is a great combination if you look at the symbolic aspect of it. The long body of the snake wrapped firmly around the rose stem has both negative and positive meanings associated with it. It depicts the strong grip that love often has on a person. Feature image @john.alaw.tattoo via Instagram

Different cultures have different interpretations of this unique tattoo. In Greek mythology and in ancient Greece, Aphrodite was portrayed with roses on her body. This represents the eternal and everlasting love between her deceased lover, Adonis and herself. Roses also signify beauty and temptation. The spiritual meaning of roses is balance and innocence. A snake represents healing and good luck and is a symbol of new beginnings. Together, a rose and snake tattoo is a blend of negative and positive aspects of life. Some even think that there’s a biblical story attached to this tattoo. The ultimate symbol that a tattoo represents can hold different meanings to different people. Best snake tattoos are those with deep snake tattoo meaning, for instance, a snake coiled represents ‘Kundalini’ energy. Again, a snake coiled tattoo design also represents a resting snake.

A Colorful Snake And Rose Tattoo

We know that snakes and roses together represent a mixture of temptation and destruction, and this tattoo seems to be the perfect example of it. The colour red has been used very smartly here. The artist has painted both the rose and the leaf tips in red to emphasize on the dominating presence of love and desire. The coiled snake has blue stripes all over its body which could be an attempt to neutralize the heaviness of the red shade. The mouth of the serpent is open and the tongue flickering out is bright red too, giving it a furious appearance. This tattoo design aptly portrays the relation between love and the wide array of emotions that accompany it. It is a great choice if you are fond of bright shades or colours and believe in colour symbolism.

A Realistic Snake Wrapped Around A Rose Tattoo

If you love black ink, we have the perfect design for you! The snake’s head draws all the attention, with its insanely realistic look and feel – it appears as if the serpent is about to lunge at you. That’s the real beauty of this tattoo. Other elements like the rose petals and body scales of the serpent were kept as minimal as possible, with some light shading on both. This gives ample room for the head of the snake to stand out and be the first element to be noticed. This is one of the most popular snake tattoo designs and will look marvellous on the arms. While it can go on other body parts, the placement of the tattoo on the arms will garner all the attention it deserves. The long body of the snake wrapped firmly around the rose stem has both negative and positive connotations.

In this snake and rose traditional tattoo, the viper wraps itself around the fresh rose stem. The serpent appears to be protecting the rose and threatening anyone coming near it. The body of the snake is slender and flexible, and it goes all the way around the rose branch. The fangs of the serpent are bare to show the fuming rage of the animal. However, its tongue has no signs of anger or violence – rather, it has been artistically drawn with a floral touch to make it blend in with the rose stem. The branch contains a fully bloomed flower as well as a closed bud about to open its petals to the world. Overall, this tattoo is an absolute beauty. We generally associate snakes with evil, danger, and death but this tattoo proves us wrong and tries to bring forth the caring and defensive nature of the animal. This is certainly a great choice for snake lovers or owners! Moreover, many people consider getting snake tattoos as a unique way of worshipping Lord Shiva.

Who doesn’t love some graphic effect on their tattoos? Subtle graphical effects make the tattoo all the more realistic and artistic and hence, are much loved by customers. In this tattoo, we can clearly see the expert work of the artist in designing the snake’s head and its numerous scales all over the body and face. They are a bit longer on the head than the rest of the body and have been shaded to perfection. The eyes are shiny and big, almost innocent looking. Unlike the other snake and rose tattoo designs we have seen so far, the serpent’s tail is not visible here. The rose leaves are not the same. Some are entirely black, some have the skin visible through them, and some are heavily shaded with a little shine on them. We can also see some scaly patterns on the right side, just next to the leaves, meaning there’s another snake lurking behind the flowers. Although a work in progress, this tattoo is beautiful.

This Japanese-style tattoo has every reason to be loved. Not only is it a unique snake and rose tattoo design, but it also does justice to Japanese art. The soft texture of the design accompanied by the generous use of colours is what gives the tattoo a creative flair. The position of the snake and the fine patterns on the underside of its body adds depth to the tattoo and make it stand out from the rest. The round leaves contribute to the aesthetic look of the tattoo. The design of the flowers reminds one of a typical peony tattoo due to the colouring effect used. This is a great tattoo for women as it contains symbols of tenderness and nurture. Women who love simple and neat colourplay can go for it.

This tattoo shows a wonderful combination of pink and black, where the snake has its body wrapped around the fully bloomed flower and is pressing its body against the delicate rose petals. Here the light effect has been depicted very clearly with the use of black, making different shadow contrast. The body texture is also clearly visible with the black scales along the snake’s smooth body. The snake’s eyes express wrath and are ready to attack anyone who means harm. The detail starting from each and every rose petal to the minute finishing of the snake’s structure stands out in this tattoo. The colours pink and black sync wonderfully to breathe life into the snake and the roses. If you are a stickler for details and love realistic tattoos, go for it without a second thought.

The main colours in this theme are pink and black, an amazing duo where pink and black stand for affection and despair respectively. In this tattoo, two of the four flowers are coloured pink. And the rest of the flowers, leaves, and the snake are tattooed in black. The snake in this tattoo hides skillfully among the different volumes of leaves and flowers. The tattoo artist has effectively shown all the details starting from different types of leaf patterns, flower petals to the flexible body of the snake. The tattoo also has minimum shadow effects along the edges of the flower petals and leaves. The snake body also appears to descend downwards, giving an unusual effect and making the ink stand out artistically. It makes for a great arm tattoo or a back tattoo.

The best word to describe this tattoo would be versatile. It has the perfect quantities of everything. Besides the rose and snake, it is also a lily tattoo. The snake is shown to be sliding through the dense row of flowers. On the other hand, it has been coloured in black to highlight the flowers in the tattoo. The snake means no harm – it is docile and won’t attack unless provoked. The combined effect of a snake and blooming lilies represent purity, transformation, and rebirth. This tattoo is quite complex and would take a lot of time and effort, so remember to be patient!

This tattoo is an ideal example of true artisanship. Here, the snake is curled up around the very base of the flower and has the small leaves and thorny branches of the plant visible through its slender body. The segments on its lower body have been detailed beautifully as well as the scales on its head. Its fangs and tongue demonstrate its aggressiveness towards anyone trying to touch the flower. If seen carefully, this design hides a special message about nature protecting nature. The snake here is guarding the flower against human threats.

The last tattoo design on our list, this beautiful tattoo is bound to astonish you. The vivid colours used here – from the body of the snake to the flower and leaves – are exemplary. The body of the snake contains two entirely different colours and not just two shades of the same colour like we have seen in some of the previous designs. The pattern on the body of the snake is also gorgeous. The rose is a soothing shade of pink, enhanced with some shading effect. The leaves are of a darker tone than the rest of the tattoo, done willingly to bring out the brightness of the other colours.