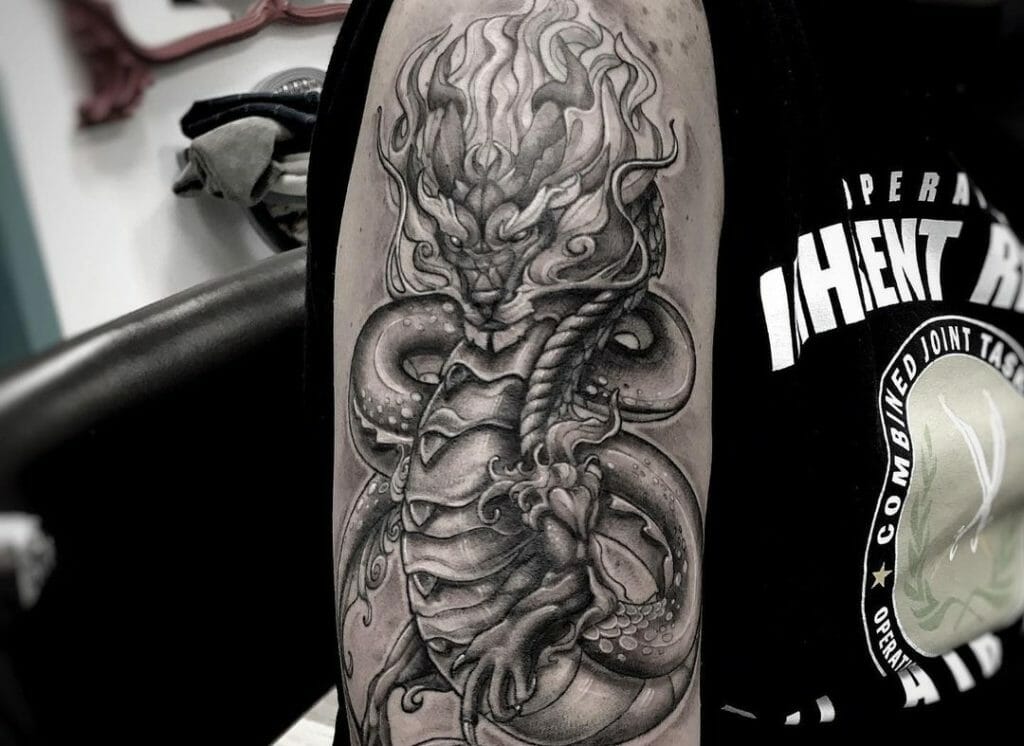 Looking for some cool ideas for a new tattoo on your arm? We have curated a top-tier list of dragon tattoos for you guys!

Though dragons are infamous for death and destruction in the West, Chinese and Japanese cultures believe in these creatures and mark them as animals related to health, prosperity, and protection, attributing a divine stature to these figures. With a growing inclination towards the East, dragon tattoos could be the right choice for you to get your arm inked.

Dragon tattoos vary widely in size and the extent of their surface area. They could be made as an elaborate design, covering from shoulder to the wrist, or as a small-scale art in the forearm. They can be made as a wrap-around tattoo circling your forearm horizontally, or as a portrait, vertically. Choices are unlimited and there is no end to experimentation. But before you get started, you must know about the variations in colour and meaning associated with the dragons.

Dragon tattoos primarily symbolize strength, courage, and wisdom. They are associated with the role of the guardian figure that protects mankind from major threats. The Japanese dragon differs greatly from its Chinese counterpart. The former is often portrayed as ferocious and malevolent than the latter, though both cultures consider them as the deity who protects. Many people opt for dragon tattoos not only for their timelessness but also for symbolism. Dragon tattoos are an emblem of balance, power, and wisdom. Based on their colour, dragons represent various meanings. Yellow dragons are noble, Blue dragons are forgiving and comforting, green dragons are close to nature and the earth, Gold dragons mean value and virtue, and finally, the black dragons stand for wisdom and experience. Read on to know more about dragon tattoo ideas and choose the one that represents you best.

This is a Chinese dragon tattoo inked in black. These Chinese dragons are characterized by their 4-5 toes compared to the Japanese dragon having only 3. This monochromatic dragon tattoo design shows the scales and the head of the dragon with close details. The roses add as an embellishment to these fire breathing creatures. If you prefer colourful tattoos, you may also like the representation of the same dragon in red. Chinese people are often seen to be colouring this mythical creature in red as a symbol of good fortune. This tattoo can be placed on the upper arm, or the forearm as shown.

The Japanese dragon tattoo looks similar to other Asian dragon designs. Here, the image aptly shows the three-toed blue Japanese dragon, also known as Sei Ryu. He is believed to be the king of all dragons and the controller of rain. The use of gold ink to highlight the horns and tail serves to contrast and bring out the beauty of this dragon tattoo. The ferocious-looking blue dragon means strength, and will look best on the upper arm.

Speaking of colourful dragon tattoos, this tattoo design serves the red and black contrast to perfection. Plain black ink is used on the dragon with neat shading and detailing. The red snake with black patterns is laced from top to toe in a spiral pattern, celebrating the courage and strength of the wearer. In many ancient cultures, snakes are believed to carry healing energy while dragons are thought to have destructive powers. If you spend your days wondering about the common link between science and religion, this might be the best dragon tattoo idea for you. The upper arm, as shown in the picture itself, is the best area to flaunt this bold beauty.

If you like to go over the top with your body art, this awesome Japanese dragon tattoo might be the one for you. The artist has portrayed the Japanese dragon with its vivid features. This dragon tattoo compliments your go-big-or-go-home attitude and rests on the shoulder, covering the upper arm and the collarbone area. The use of red, yellow, and blue paired with the shading in black makes this piece one of the best dragon tattoo designs for men.

Yin Yang is the most celebrated symbol of the coexistence of binaries. It stems from the Chinese culture showing not only tolerance but the acceptance of both black and white. Here the artist shows experimentation with the black dragon with a white head and a white dragon with a black dragon head. Fine black lines are used to bring about a seamless transition in this dragon design. The style is a mixture of classic and contemporary, exhibiting the power of acceptance of the wearer. You can place this on your forearm or the sleeve for better exposure.

Freehand dragon tattoos for men are an excellent choice while considering dragon tattoo designs. Guys who prefer full sleeve tattoos must find this a cool representation of Asian fire breathing dragons. This awesome dragon is inked with shades of black and red. While its body covers the arm, the dragon head rests on the shoulder facing the front. If you are someone who is all over an elaborate design, this full-length dragon tattoo will surely up your sleeve tattoo game.

This tattoo dragon stems from the Chinese culture with its 4 toes and is best to complement your fearless spirit. Quite similar to the previous dragon tattoos for men, this representation covers an entire half of your body with its wings on the shoulder blade and chest and the body on your arm. Guys with an affinity for a sleeve tattoo might find this a perfect piece to style their arms. This Chinese dragon is an apt tool to symbolize your power and style.

How is it possible that we talk about dragons and exclude anime? Ghibli studio is renowned for its use of mythical creatures and magical realism to represent the Japanese culture and way of living. This piece of art is from Hayao Miyazaki’s classic, Oscar-winning film, Spirited Away. If you are an otaku, you have probably placed this dragon tattoo in the right frame. It is Haku in his dragon form slowly descending to the water body being beaten with thousands of paper cuts. Fine line art with black ink is used to represent the intricacies of this scene with the many paper planes and cuts on Haku. The design is simple yet carries the essence of nostalgia for the brilliant movie. To amp up the tattoo design, you could also add the figure of Chihiro laced with the dragon. This is an awesome tattoo for men with immense regard for the Ghibli world.

Chinese dragon tattoos can be cute and they can look awesome on your sleeve. This Chinese dragon tattoo is the epitome of cuteness! Vibrant, cool, and cute, this dragon wrapped around arm tattoo brings forth Asian culture with a quirky twist. The variety of eye-catching colours and patterns on the dragon back makes this tattoo design a perfect fit for guys planning to get inked on the forearm or sleeve.

Awesome Dragon Tattoo Ideas For Men With A Dragon Ball

Guys can’t forget this legendary image, no matter what! Except, the small dragon is Shenron with a dragon ball. Shenron has consistently been portrayed to be the one with fury and a gigantic stature, as is commonly associated with Japanese dragons. But here, the artist has taken a cute and colourful turn to represent the dragon in a new light. This tattoo design is apt as a sleeve tattoo for men who like a vibrant, small dragon tattoo amidst the monochromatic styles.

This design radiates enlightenment like no other! The third eye coupled with the Chinese dragon presents a cool yet striking sleeve tattoo for men to showcase their true spirit. The minute detailing of the dragon back is uniform and worthy of praise. Contrasting ink brings focus to the presence of the eye. The third eye could symbolize the wisdom that the dragon holds. If you are someone who likes off-beat tattoos, this awesome dragon tattoo is your best pick.

The artist has made this Japanese dragon tattoo look so cool solely by introducing a spiral pattern wrapping the arm. The dragon back is adorned with pink flowers to add an element of beautification to the otherwise dangerous creature. These dragon tattoo designs are apt for guys who like to include a touch of femininity in an overall macho image. As a variation to these tattoos for men, you can add a bulkier tribal dragon tattoo circling horizontally the arm as an armband.