101 Best Dragon Back Tattoo Ideas You’ll Have To See To Believe! 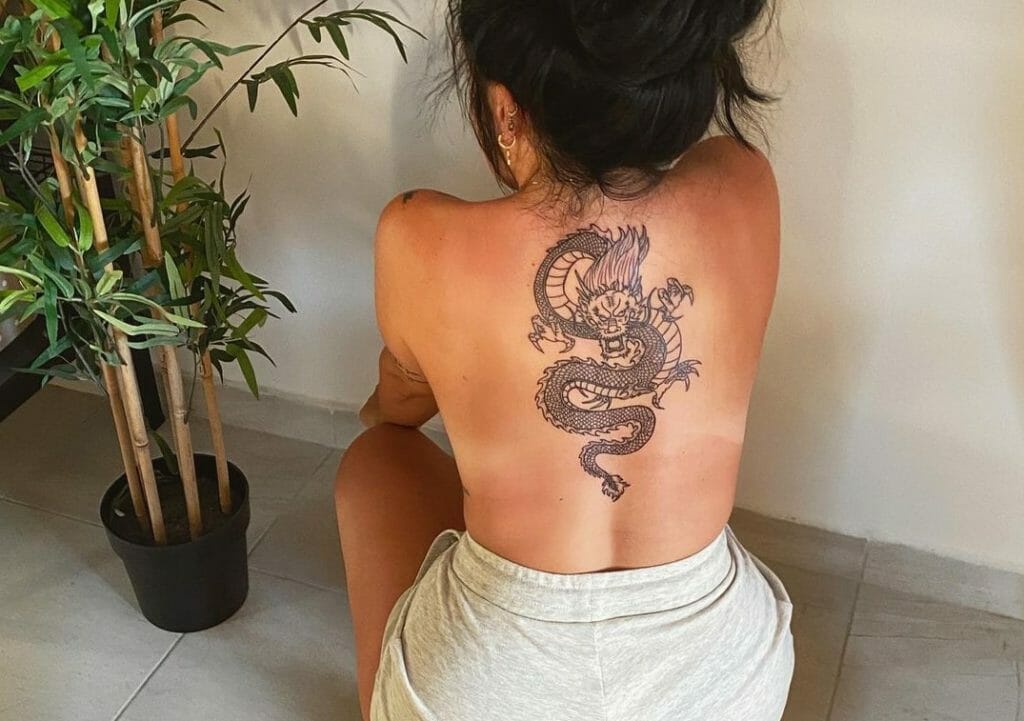 Looking for some creative dragon back tattoos that express your style? Here is a list of some of the best designs to help to get inked.

A dragon tattoo envelops layers of meanings under its aesthetics.

Dragons find their mention in myriads of cultures all over the world as the mythical beast endowed with supreme power. However, there exists a wide gap in the way the orient and the occident perceive this fire-breathing creature.

The East regards the dragon as a divine entity protecting civilizations from adversities of all sorts, while in the West, a dragon tends to represent a malevolent creature that needs to be defeated. Ancient oriental philosophy accounts for the dragon as the source of prosperity, happiness, good luck, wisdom, and power. While on the other hand, one of the earliest mentions of dragons in ancient European literature calls to mind the figure of Grendel as was depicted in the epic, Beowulf. But as body art has become a celebrated notion, dragons symbolize all things positive representing power and courage above all. Getting a dragon tattoo on your back is a great choice for the surface area it offers, simultaneously causing lesser pain. The popularity of dragon tattoos is unmatched. Though they have become mainstream in the last couple of years, there is a lot of room for experimentation with this popular imagery. For instance, as Emilia Clarke etched her inner Khalisi on her forearm with her miniature dragon children, many celebrities are enchanted by dragons and have adopted it on their bodies. Mel B, the British singer, and songwriter has a Chinese dragon tattoo on her back that symbolizes wisdom and power. Read on to find more ideas on dragon tattoo designs that suit your back and your badass personality!

Here, the artist portrays a Chinese dragon outlined in red and its body spiraling upwards. The Chinese believe red dragons to be a symbol of good fortune and prosperity, thus are commonly seen during wedding ceremonies and several other celebrations. The dragon’s head is inked upwards and is considered a lucky sign. The shading techniques and detailing on this red dragon adds a dimension to enliven the design.

This is a Japanese dragon tattoo vividly outlined in red ink. The intricate details and apt portrayal of the fierce Japanese dragon add to the beauty of this piece. Japanese culture sometimes represents dragons as wrathful beings even though their meaning is that of strength, providing health and security to mankind. If your search is for a red dragon back tattoo, you could opt for any of these two cool dragon designs.

This Japanese dragon tattoo is outlined with fine black ink and adorned with pink flowers. Based on a simple representation of the ferocious traditional Japanese dragon, the artist has taken a cool turn to incorporate a contemporary addition in this design. If you tend to incline towards neo-traditional art, this Japanese irezumi dragon might be a good choice for you. You can perhaps experiment with different flowers that are vibrant and pose a direct contrast to the dragon.

Exhaustive Dragon Back Tattoo For Men

If you are someone who likes their body art to be loud and all over the place, this Japanese dragon tattoo could serve as a great example. Filled with radiant shades and minutely detailed features, this back dragon tattoo design stretches from your shoulders and upper back to cover the buttocks. These full-length designs are a right fit for men, enhancing their masculine energy with colourful attributes.

This is another such example of a full-length Japanese dragon tattoo with the addition of a badass Samurai coupled with the fierce dragon. This design covers the entirety of your back and down to the thighs. Samurai in Japanese culture are symbols of power, bravery, and intelligence. They are the individuals associated with the warrior caste and expected to possess firm control over stoicism. This feisty figure when portrayed alongside a dragon represents an embodiment of power and stealth.

Badass Chinese Dragon Tattoo Back With A Skull For Men

In Chinese culture, the dragons symbolize wisdom, power, and prosperity. But by coupling the dragon with a hollow skull, the artist goes on to establish a greater meaning under the surface. A skull is considered a mark of death and desolation, a reminder of mortality. However, when the spiritual Chinese dragon captures the skull in its helix, the dragon tattoo design may represent a balance between life and death. These dragon tattoo designs could be interpreted as a symbol of hope, of the life force reducing the impact of death in the world.

This dragon tattoo design is perhaps an elaborate picture of how the Asian cultures considered their protector dragons to be. Hovering around the terrestrial landscape, the dragon looks after the entire civilization with its glaring eyes. The dragon has its tail in the seas and its head up in the clouds, encompassing geography in its stature. These cool dragon tattoos are aptly suited for men, owing to the large surface area for such vivid detailing. If you are someone who is heavily inclined towards the Orient cultures, this dragon tattoo design on your back could be your inspiration.

If you do not wish to devote the whole of your back to a tattoo, this Chinese dragon tattoo might be of some aid. Covering only the upper back, the design strives to represent the spiritual dragon emerging from what it can be supposed as its shrine. Painted in black ink, the dragon’s body laces the sanctum and emerges in the clouds, symbolizing ascension. This tattoo design could be seen as a picture from Chinese culture that thought of the mythical fire breathing creatures as imperial figures. These Chinese dragon tattoo designs might be rightly fitted for men opting for black lining, cool body art.

This elaborate Japanese dragon tattoo incorporates the famous Hannya mask that masks sorrow and tragedy under the veil of terrifying, demonic implications. The mask generally attempts to symbolize women with their betrayals, jealousies, and other such vices and was widely used in the Japanese theatres to express such emotions in female characters. However, hannya tattoos have been accepted differently meaning different things. For instance, some consider this tattoo as a symbol of good luck, some believe that it marks a boundary separating the ills of the past from the untouched future, some think of it as a permanent reminder of the grief they had overcome in the past and so on. All in all, this mask carries certain positive connotations among lovers of body art. The artist here clubs the badass, fire breathing dragon with the hannya mask to represent a unique design associated with the Asian culture. When observed closely, it can be interpreted as an amalgamation of the supernatural energy from these two entities unleashing in the form of a cool design. The creatures in black and the shading techniques enliven the idea. There are certain flowers in red and white that act as embellishments. This tattoo is an example of how you may also create an elaborate, detailed, dragon tattoo on the back by using certain tropes from Asian cultures.

Dragon And The Moon Tattoo For Men

This is a dragon from the western culture with its characteristic long tail and bat-like wings. The western dragon soars upwards towards the moon, showing ascension in cool, black shading. Detailed attributes in the body of the dragon create a unique style that will impress men who like neater tattoos. You can definitely draw inspiration from the popular representations of dragons, for instance, Game of Thrones, The Girl With The Dragon Tattoo, The Hobbit, and so on, to create your own dragon designs.

This cool presentation of the Chinese dragon in red with the red moon presents an off-beat way of portraying the red dragon. The red dragon can often represent fire and prosperity. The Chinese tend to link this dragon as a symbol of vitality, creativity, and enthusiasm. This Chinese dragon is outlined and shaded with red ink, covering the whole of your body. These creatures can further experiment with the sun and other such tropes from nature to bring out one’s individual style.

Cool Dragon Back Tattoo For Men

By far the Chinese dragon tattoos that were mentioned focused on a singular dragon embellished with various tropes. In this design, two Asian dragons are taken in the canvas producing a badass style. The red and black dragon tattoo is an interesting amalgamation that clubs two different implications associated with the two dragons. The black dragon is symbolic of strength, death, and vengeance while the red dragon is auspicious. If taken together in a picture, these two dragons can be interpreted to show the binaries of nature and how they co-exist in the presence of the other. Asian philosophies are known to have established the co-existence between binaries long before their western counterparts. Hence it is particularly important to incline towards the East and view this design with particular regard to this conformity. These dragon tattoo designs would complement men with a balanced persona who search for a similar sentiment in art as well.

This dragon tattoo design is unique yet a commonly used trope by men who love tattoos in general. Here, two dragons spiral around the yin yang, and may be said that they are the embodiments of the yin yang having a part of themselves to the other. Yin and yang stem from China representing two contrasting forces that co-exist by true acceptance of each other and thus become an apt trope to be used in Chinese dragon tattoos. Although you can possibly colour the dragons in black and white ink, and incorporate a cool shading technique to exhibit the union between the two.

Tribal Dragon Tattoo On Back For Men

Dragon tattoos are thriving in their position for ages and will remain unfazed in the future. Dragon tattoos are best suited for men complementing their masculinity. You can also experiment with colours as yellow, green, and blue dragon tattoos, keeping in mind their symbolism. A few more cool suggestions to help you get inked are as follows:

Still looking for inspiration, then checkout this blog post about spine tattoos.

101 Best Penguin Tattoo Ideas You Have to...

101 Best Mechanical Tattoo Ideas You Have To...

101 Best Heartless Tattoo Ideas You Have To...

101 Best Seahorse Tattoo Ideas You Have To...

101 Best In Memory Tattoo Ideas That Will...