10 Best Dragon and Phoenix Tattoo Ideas That Will Blow Your Mind! 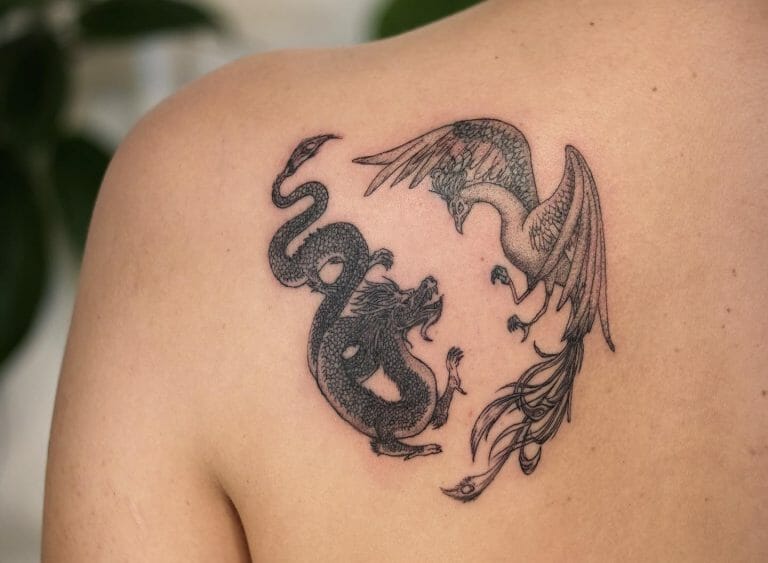 Are you looking for the best dragon and phoenix tattoo ideas? Keep reading to check out the best phoenix and dragon tattoo ideas.

Dragon and phoenix are two mystical creatures, and they look very elegant as a tattoo.

A dragon and phoenix tattoo looks super cool due to the structure of both the creatures. They are a majestic symbol, and many people get this tattoo to keep themselves connected to themselves.

Phoenix and dragon tattoos are trendy tattoo designs for Japanese tattoos. These two creatures have a deeper meaning to them, which makes them a popular tattoo design. A dragon symbolises masculinity, power and wisdom, whereas a phoenix tattoo is the symbolism of resilience, strength and capability to overcome trials. If you are searching for the best dragon and phoenix tattoo artworks, we’ve got you covered. We have compiled a list of phoenix and dragon tattoo designs for you to choose from.

The Chinese culture has various representations of many mythical creatures. Like dragons and phoenixes, we can also find it in many other cultures. Phoenix and dragon tattoos often represent difficult times in one’s life or symbolise a new beginning, so if you are searching for something simple yet beautiful, this tattoo is just for you.

This tattoo showcases a dragon, which symbolises male vigour, which means fertility and a phoenix symbolise yin splendour which means female beauty. This is a black ink art of dragon and phoenix. This tattoo design is best for chest and back tattoos. Irrespective of your style, this tattoo will go on with any aesthetic.

Feng shui harnesses positive energy in their surroundings that bring in good luck. The dragon symbolises masculinity and yin energy, whereas the phoenix represents feminine yang energy. This tattoo showcases a dragon and a phoenix on a cloudy red background. Phoenix and dragon tattoos represent many things, such as love, rebirth, harmony, togetherness and many more.

So, if you are searching for something elegant with a deeper symbolism, then this phoenix and dragon tattoo sleeve is a perfect tattoo for you. You can match this tattoo with any aesthetic you want.

The dragon is a yin and yang symbol of strength, power, as well as good fortune in Chinese culture. Dragons typically hold a flame pearl which is inked with deep red combined with black and grey hues, adding character to the personality of the individual. These red and grey dragon and phoenix tattoosrepresent prosperity and immortality in Chinese art.

The yin yanggrey ink dragon is an eye-catching design choice if you want a tattoo that includes some of the most important symbols in Eastern culture. The Chinese dragon’s long, snake-like body inked with deep blacks makes it ideal for a tattoo on a curved portion of your body, such as your waist, calf or back. The Chinese dragon and phoenix tattoowill bean ideal tattoo for somebody who identifies with its culture as well as its meaning.

In Chinese culture, the dragon or rather Phoenix represent yin and yang. The ‘Celtic love knot’ is when a dragon and a phoenix unite their abilities to signify love. So how about a tattoo of a dragon and Phoenix? Using contrasting ink colours for each dragon depicts the dual traits of someone’s personality.

The dragon has many symbols and meanings in various cultures. Dragon is a symbol of evil, reincarnation, fire, royalty, power and many more. In a different part of the world, dragons got other symbols and meanings, and it is used to represent both good and bad based on their colour and their spiritual relation. This tattoo design is a combination of sea, dragon and a red Chinese luck charm.

It is a very symbolic back tattoo which showcases the fine art of a dragon with a sea and a red charm. So if you are looking for something cultural and symbolic, this tattoo design is just for you. Irrespective of your style, it will look great on you.

A half sleeve minimal black and white Chinese dragon tattoo, which does not cover the entire arm from shoulder to wrist, are not always noticeable. As a result, it’s a popular choice among newbie tattoo fans, and the dragon symbolises masculinity. Scale up the pattern to wrap over your upper arm or the bicep to show off amazing Chinese dragon body tattoos with thin black detailed lines of the dragon tattoo. These dragon tattoos have natural curves that follow your body’s lines organically.

This grey ink dragon minimal black and white tattoo looks wonderful when done correctly. Alternatively, you can combine a collection of miniature dragon tattoos with more elements like detailed fins or scales of the Chinese dragon to make the tattoos more attractive.

Phoenix has many representations in mythology, but it is mainly associated with the sun god. Phoenix is considered a symbol of rebirth, and of rising again after failure also symbolises immortality and reincarnation. This beautiful phoenix tattoo idea showcases the highly detailed black inked art of the phoenix. This art style is known as brush tattoo. Despite being a simple tattoo, it provides an intricate detail of the phoenix. You can get this tattoo inked in various parts of the body, irrespective of the place. It will look good anywhere.

Are you searching for an elegant, symbolic, meaningful and mythological representation of a creature? Then this tattoo, go for this one.

Do you want to get a phoenix tattoo? The mythological bird is a favourite of many. This phoenix tattoo design is perfect. The entire tattoo has been done using black ink, and the monochromatic look makes it look so aesthetic. A Phoenix tattoo is a symbol of new beginnings. The intricate details on this tattoo are what make it stand out. It seems absolutely outstanding because of the detailing that has been added to it.

This black ink tattoo also has an excellent placement, making it look bold. However, you can definitely get it done on any part of your body.

Japanese phoenix tattoos, or tigers, dragons, geishas, koi fish, masks, and samurai, are some of the most famous traditional Japanese tattoo designs. This phoenix tattoo design looks super cool due to its intricacy. Phoenix and moon tattoos for men are a popular choice because of their out-of-the-box aesthetics. There are designs of Phoenix and moon tattoos that look nice on the arm, shoulder, forearm, leg, back or side, full and otherwise half sleeve.

Dragon and phoenix tattoo designs are definitely a favourite because of their symbolism. Their combination is considered a legend in many cultures. A dragon phoenix tattoo looks great on any part of the body and is a trendy tattoo design because of its symbolism and aesthetics. Make sure you get your tattoo done by a professional tattoo artist to achieve the perfect look. We couldn’t help ourselves but add a few more phoenix and dragon tattoo designs for you to choose from.