10 Best Western Dragon Tattoo Ideas That Will Blow Your Mind! 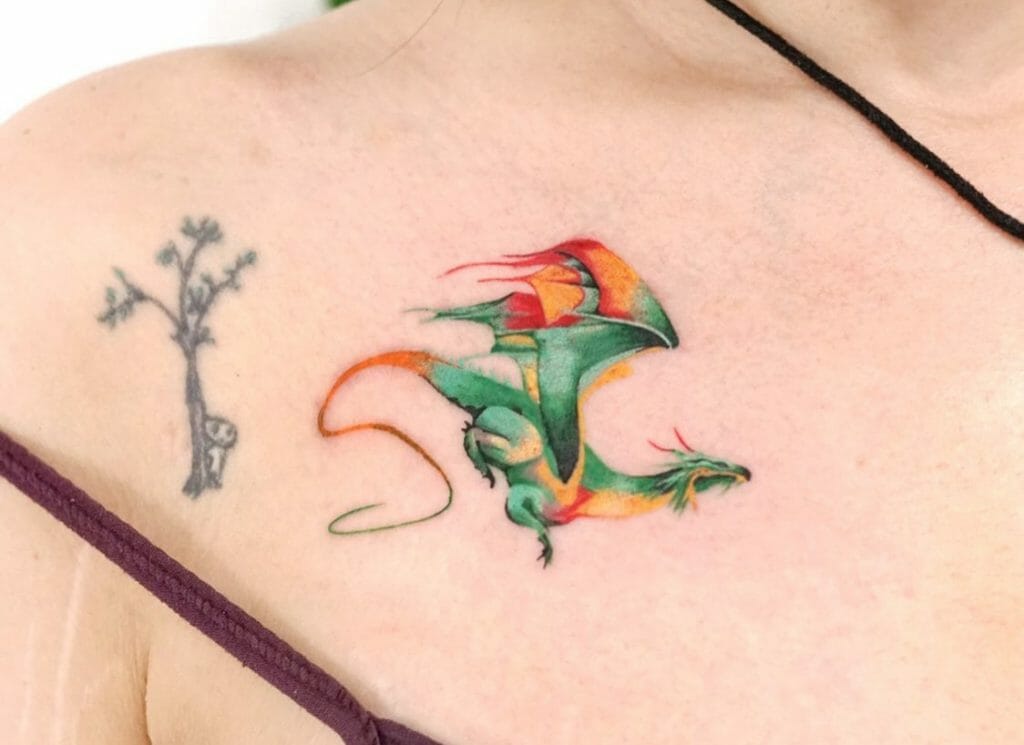 Looking for western dragon tattoo but not able to find the right pick? Go through this list to do away with the confusion and choose the best dragon tattoo.

A dragon tattoo has always been considered a symbol of strength and style and also, the Western dragon tattoos are trendy and in fashion, nowadays.

A dragon tattoo signifies the symbolic meaning of ferociousness, vigour, and strength. Dragon tattoos are also a representation of cultures such as Japanese culture, Chinese culture as well as eastern culture.

Different types of dragon tattoos signify different elements. Dragon tattoos meanings are depicted by the size of the dragons and the image portrayed in the tattoo styles.

This can be your pick for a dragon’s tattoo for men as it shows both strength and vigour. The dragon is full-bodied and open-mouthed which shows that the dragon is ferocious. This is considered to be a western dragon tattoo design where the dragon shows its flashy eyes. The paws and clutches of the dragons show that it is ready to attack and Justify why they are called evil creatures.

This is one of the Japanese tattoos for men which symbolizes strength. it bears The authenticity of western traditions and also signifies that a bad omen may be conquered with the veracity of this dragon tattoo.

This is a unique eastern dragon’s claw tattoo best suited for men. The claw of the dragon represents its great power and immense strength. It is a small dragon tattoo that is done with only a blend of black shade. This tattoo looks ideal when made just above the wrist area.

Only the claw of the dragon and nobody and face represent dragons from different cultures, hence showing the natural elements and different types of dragons, showing the same vigour.

Pastel Dragon on The Arm Tattoo

This is a modern-day tattoo that requires extreme kills for the blend of colours which it has, namely, red, yellow, blue, black, and white. Another distinctive feature of the red dragon tattoo is the bright eyes of the dragon. The dragon has red eyes which is also the colour of the body of the dragon and those eyes stand out in the whole tattoo design.

Also, the yellow stars in the dragon tattoo design symbolize the wisdom of the dragon and sense a message that a dragon is not only a ferocious creature but also one which has wisdom.

Dragon With Knowledge And Wisdom Tattoo

It is a Chinese dragon, so by going through the theory of Chinese culture it is stated that feeling the eyes of the dragon before the completion of the tattoo design is considered to be unlucky. That is why the eyes are not much focused on in the tattoo design and are just represented as a dot.

The book in this tattoo design shows that there is wisdom in a dragon as well. dragon tattoo designs that the pics the knowledge and wisdom of dragons are unique and different in themselves. This particular tattoo design is only a blend of black shade that has been used to represent the freedom and knowledge of the dragon as being knowledgeable makes one free from barriers.

It is known by everyone that dragons are nothing but mythical creatures. still, most of us are fascinated by these creatures which do not even exist in reality. so when we can create a creature in our minds why not add new attributes to the creature! This dragon tattoo makes additions to the nature of a dragon.

Dragons tattoos are considered to be a tattoo that symbolizes strength but this particular tattoo has some different representation. The flower bed around the dragon’s body shows a different picture.

Generally, a dragon is all about being violent, fierce, and strong. But this depiction of the dragon shows the calm nature of the creature, making it a cool dragon. A cool dragon does not mean apathetic but it means that dragons can also be a bit different from what they are supposed to be. This tattoo design is the best drone below the elbow and above the wrist area of the hand and it is a complete blend of black shade which is a representation of a calm yet mighty dragon.

The tattoo will be clearly visible if you wear anything that is a half sleeve. This particular tattoo design a suitable for both men and women as the dragon’s body is beautifully drawn on your forearms and you can show it off as something which is uniquely considerable by the people around you.

According to Chinese mythology, a dragon tattoo is considered to be lucky if it is associated with whiskers. So this tattoo specifically shows the long whiskers of this mythical creature. the whiskers of the dragon also have their beauty as it moves along with the body of the dragon in a Swift and stealthy motion. In this majestic forearm dragon tattoo, the dragon is moving just like a tiger. As the two creatures have raw power, they are closely related to this tattoo.

This is a super cool Japanese dragon tattoo and a tattoo that symbolizes strength. It is a big and multi-coloured tattoo that is best suited for men. As you can see that this particular tattoo design covers the whole arms and the chest of the person who is getting inked with this dragon tattoo. It is a modern-day design and it gives a 3D effect because of the colours that have been used to draw this dragon tattoo.

The blend of colours includes black, yellow, blue, white, and brown. This is one of the best dragon tattoos for men as the depiction of this tattoo design itself signifies strength and masculinity. The small details of the design are the unique feature of this tattoo. This is a big size tattoo and a lot of colours are required to get this tattoo done, that is why this is a time taking design that covers the whole upper body of the person who is getting inked.

Dragon on Your Legs tattoo

This particular tattoo is the centre of your leg. As you can see in this picture that both the legs of the person are covered with the dragon tattoo. Ideally, this tattoo is best suited for men but women who want to get an end can also get this tattoo done on their legs.

It is a multi-coloured tattoo that has colours like black, red, yellow, green, pink, and white. The eyes of the dragon are the centre point of this tattoo. The Celtic dragon has shimmery and big eyes which depict that these mythical beasts are great observers. This tattoo style is a part of Western cultures and that tattoo dragon on your legs gives you the advantage to show your beautiful tattoo creation to the world if you want to.

This is a small and beautiful dragon tattoo which is also similar to a phoenix tattoo. Just like the phoenix rise from the dead with new features or characteristics, this dragon tattoo also changed its characteristic evaluation from being fierce and dreaded to a beautiful and non-scary creature.

This is a sleeve tattoo that is drawn majorly in blue colour with a blend of red in it. The petals in and around the dragon tattoo show the beauty of the dragon and also depict that it brings good luck with it. This is an amazing flower petal dragon tattoo which is a small one and can be drawn near your quads or your neck. The small details of this tattoo are majestic.

Apart from the tattoos listed above, there are some other traditional as well as modern tattoos that are ideal for you and have symbolic meaning as different kinds of dragon tattoos bear different representations. You can also check out:-