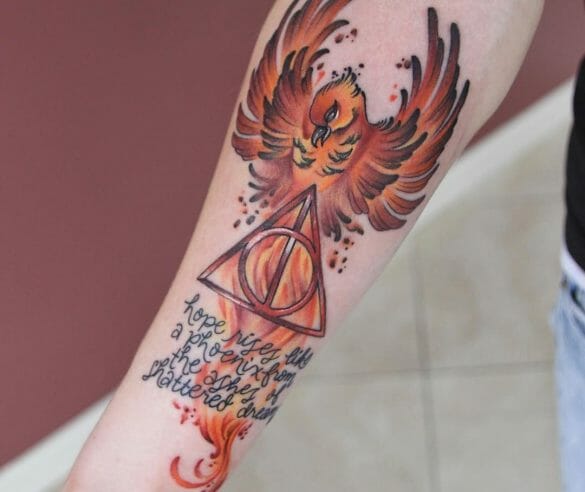 All Potterheads assemble! We have some of the coolest collections of Fawkes the Phoenix from Harry Potter Tattoos for you to fawn over.

Fawkes, the trusted and loyal companion of Professor Dumbledore, is most definitely one of the favourite magical creatures from the Harry Potter Series.

Potterheads around the world have been amazed and awed by this stunning magical creature ever since Fawkes saved Harry Potter′s life after he fought the Basilisk. Fawkes′ tears contained healing properties that saved him.

A phoenix represents a rebirth in mythology; the phoenix perishes in flames only to emerge from the ashes.

There is much legendary folklore associated with a Phoenix and most of them stand true to its ability to burst into flames and rise from the ashes again. So, clearly, it had become a popular tattoo design for tattoo enthusiasts.

Especially, for the Potterheads who are just as enthusiastic about tattoos as they are about the secrets of the Hogwarts′ hallways.

So, we have curated a list of gorgeous Fawkes – the Phoenix′s tattoos and we assure you that you will not be left disappointed because these are some of the most sought-after tattoos around the world.

Most Phoenix Tattoos are colourful and vibrant, however, this Fawkes Tattoo has been created with a lighter shade of blackwork. Here we see a version of Fawkes with his wings held high right before he bursts into flames, inspired by one of the coolest scenes from the movies.

Along with Fawkes, the artist also incorporated some other elements of the Harry Potter series. There′s the Sorting Hat on top of Fawkes′ head; the words Always and 9 3/4 are placed above the Sorting Hat and one of the most significant art, the Deathly Hallows symbol.

Overall, the tattoo recreates all the significant symbols of the series and it is sure to appeal to you seeing as not only does it put the Phoenix as the hero tattoo, but also has other little elements that make for an amazing Harry Potter Tattoo.

Fawkes Tattoos are incomplete without a Neo-Traditional design. They are bold, illustrative, vibrant and loud. The ideal style of tattoo art for a Phoenix tattoo.

In this stunning forearm piece, the artist has drawn only the head of the Phoenix with a grey tone, giving it a realistic look. The overall tattoo has a glossy look, which adds to its almost 3D-like look.

Other than Fawkes, the artist also added the famous Felix Felicis otherwise commonly known as the Liquid Luck potion and the Elder Wand. Together they make for a beautiful tattoo for Potterheads to gush over.

This simple yet dazzling piece of art is sure to catch a lot of attention.

Fawkes stuns in a flight position and the art is drawn in such a way that it looks like the mythical being has been captured while it soars high.

The tattoo is absolutely stunning despite its simple artwork, and its neo-traditional style does not fail to impress with its illustrative look.

This cute little baby phoenix artwork has been created with fusion work. If you love fusion ink works then this one is ideal for you.

Inspired by a Phoenix′s ability to burn into flames then rise from its ashes, the artist created a baby version of Fawkes after he was born again in one of the scenes from the Harry Potter movies.

So, there are no secrets as to why this artwork is popular among the population who loved the book and the movie. If you are just as thrilled and love the baby version of Harry Potter′s little saviour then this tattoo is for you.

Fawkes In His Elements Tattoo

We can easily recognize this scene where we are introduced to this mythical bird in Dumbledore′s chamber when Harry meets Fawkes for the first time, on his Burning Day. We are awed by his powerful display when he burns into flames.

Inspired by this, the artist creates beautiful yet simple artwork of an older looking Fawkes sitting in his spot next to Dumbledore, adding to the look, the artist also incorporated simple things like a Hogwarts letter and books.

Together, it is a beautiful piece of art that will appeal to all the Potterheads.

Here′s a simple black and white piece, ideal for those who find small tattoos appealing.

The artist creates a detailed, close-up side view of Fawkes and a burning, melting candle. Since phoenixes are powerful and meaningful in their own story and rights, it is self-explanatory as to why you should get a Phoenix tattoo.

Fawkes And The Deathly Hallows Tattoo

This piece is quite possibly one of the most elegant and sensuously gorgeous pieces among all the artwork we have collected so far. With its vertical position, the artist gave Fawkes a long, stretched, soaring high look.

Coloured vibrantly with gold and orange, the artwork is ideal for a forearm placement. Together with the Deathly Hallows symbol in the midst, it gives off a powerful vibe.

This huge piece is perfect for those who are looking to get a thigh tattoo. Since thighs provide large spaces, the artist can get creative with his art.

Like in this piece, the artist created a large and intricately designed Phoenix, right before he burns. His wings and tails are elegantly designed, while smoke lingers in between.

This cute little tattoo is every Potterheads favourite because not only is it Fawkes, but it′s the cutest, animated version of Fawkes. Something you′d see if a Harry Potter Animated Series.

It′s cute little design is an eye-catcher and you can get one too.

When the Basilisk had gotten to Harry, it was Fawkes′ tears that he healed his wound. We are all aware of the fact that Phoenix′s tears have healing properties and this tattoo is a reference to just that.

A simple artwork of Fawkes with a side-view, the artist drew him with a tear-drop. Below that, his name is drawn in a beautiful script.

If you are looking to commemorate this beautiful creature with mythical powers then this is ideal for you.

This ends our small collection and we hope that you allow Fawkes′ tears – in the form of a tattoo – to cure your suffering as you revive and on your road to a brighter, healthier existence.