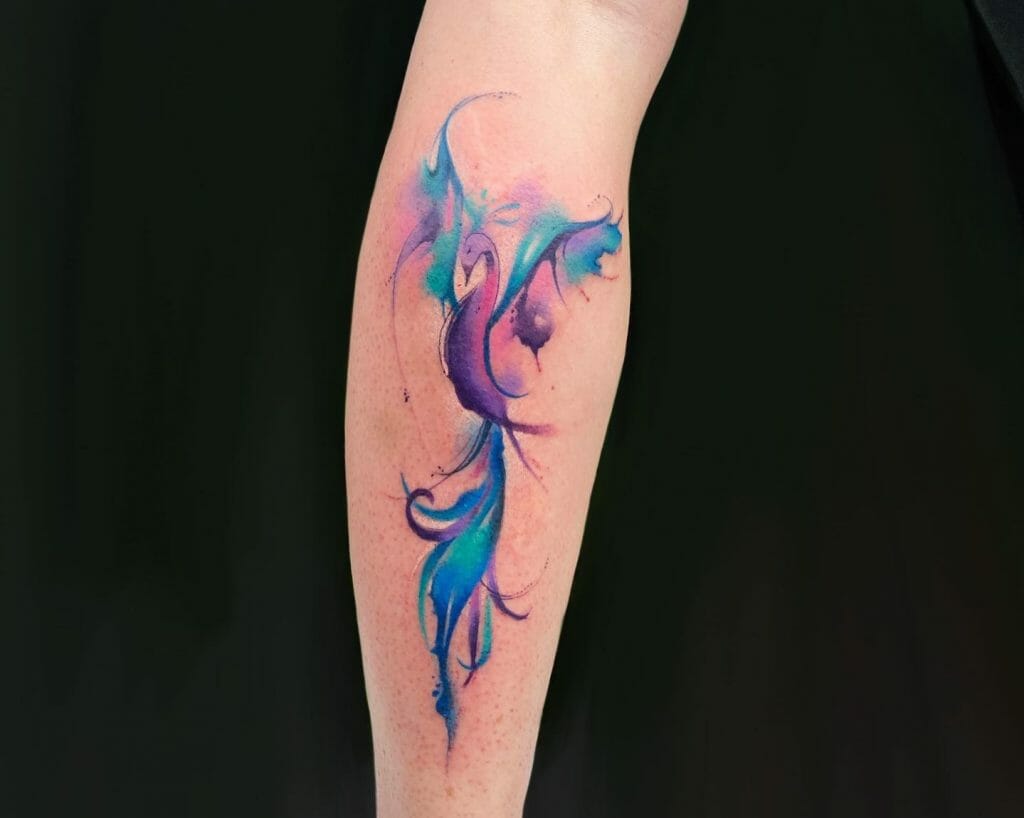 Does the concept of a phoenix bird simply fascinate you? Here are some of the best phoenix tattoos that you will love to go for!

The phoenix can be transformed into a stunning tattoo art with great symbolism. The mystery surrounding this mythical bird along with its stunning appearance makes it a popular choice among tattoo lovers.

The English word ‘Phoenix’ has been coined from Latin along with some French influence. According to Greek mythology, the phoenix is a mythical bird that is born out of ashes and can regenerate itself after death. It is associated with the sun and its origin has been attributed to the folklores of ancient Egypt. The phoenix rising from the ashes signifies a new life and transformation. In Chinese mythology, the phoenix is regarded as an omen foretelling harmony. It is also associated with the yin yang symbol and is symbolic of marital bliss. Several scholars like Herodotus, Pliny, and Pope Clement have contributed to the myths associated with the Phoenix. Over time it has been linked with immortality, resurrection, rebirth,
new path, and Christ. The phoenix is a great theme when it comes to tattoo designs and can be beautifully portrayed on the skin with a multitude of colours. The beauty of the bird, combined with its mythical interpretations, is what makes them so popular. You can portray your phoenix tattoo in the burning flames of fire or in the tranquil shades of blue and white. The colours used in portraying the phoenix also bring great significance to its meaning. There are a variety of ways to design your phoenix tattoo and here are some phoenix tattoo ideas you can check out!

The beautiful phoenix tattoo is paired with delicate pink flowers in this design. It’s plumage inked in a pink hue with purple shading. The wings of the bird have a blue tint. The yellowish orange hue on the bird’s head creates a beautiful contrast. The flowers are intricately detailed in a shade of pink with white highlights. The pink florals certainly bring a feminine charm to the phoenix tattoo.

The phoenix bird is detailed with geometric figures in this unique tattoo art. The bird is flying up the sky by stretching its wings. Its plumage is intricately designed with a multitude of geometric shapes, neatly placed one after another. Some of the shapes are coloured with blue and red ink to bring contrast. You can also opt for a variety of colours to portray your geometric phoenix design.

The stunning portrayal of the phoenix tattoo in black ink surely makes this design stand apart. The design with its crisp detailing speaks of the artistic genius of the tattoo artist. The wings of the phoenix are artistically inked on the arm of the wearer. Moreover, the crescent moon inked with dot work detailing accentuates the charm of the tattoo design. Perhaps, the phoenix is flying in the night sky stretching its beautiful black wings.

The phoenix tattoo is inked in a bright red hue on the lower back of the wearer. Its red wings are emboldened with black streaks to create a play of contrast. Its head and neck are inked in a glowing shade of yellow that makes the design look even more appealing. The smudging of colours in the backdrop beautifully highlights the design. A red phoenix is symbolic of the fire of passion and creativity. Apart from your lower back, you can also place this red phoenix design on your chest or thigh.

This vibrant phoenix design is portrayed in a combination of three different colours. Its upper body is detailed in black ink covering its head and some parts of its wings. The rest of its plumage and tail coverts are inked in a blend of red and orange hue. The crisp detailing and the stunning colour pallete beautifully highlight the phoenix design.

This spectacular shoulder tattoo depicts the bird in a multitude of colours combined with tiny florals. The underparts of the phoenix have a glowing yellow tint that fades into a pale orangish hue near its tail coverts. The bright feathers have a gradient of pink and blue tints that beautifully merges into one another. This design looks more like canvas art for the beautiful blend of colours.

The phoenix tattoo design is sketched in a blend of red and blue tint in this pretty tattoo art. It has a bright red plumage, shaded in the colours of fire and detailed in black. The outer edge of its wings has a contrasting bluish hue. Moreover, the beautiful portrayal of its tail feathers is not one to be missed either. You can pair this tattoo with small designs like a crescent moon or stars to make it more appealing along with bringing depth to its meaning. The phoenix rising from ashes is symbolic of faith and endurance.

You can potray your rising phoenix tattoo in a contrasting backdrop to create a stunning visual. The phoenix is detailed in a reddish-yellow hue and outlined in black. The tranquil blue backdrop stands in contrast to the brightly coloured plumage of the phoenix. This play of contrast highlights the design.

If you’re a fan of abstract art then this phoenix tattoo design with abstract detailing can be your top pick! The silhouette of the bird is inked in black and shaded in the same hue. You can also portray this mythical bird with dot work detailing to give it an awesome look. Pair this design with a vibrant sun tattoo to bring a stunning contrast. You can place this tiny phoenix tattoo on your wrist.

This dainty phoenix design is detailed with fine lines and geometric patterns at the centre. Tiny stars tattoo surrounding the phoenix are used in detailing this beautiful design. The intricate detailing of its feathers enhances the aesthetic of this phoenix tattoo art.

This enchanting tattoo design portrays the majestic bird in a vibrant shade of colours. Moreover, the stunning backdrop of the design depicts a galaxy filled with thousands of shining stars. The phoenix tattoo represents transformation, along with the galaxy that symbolizes commitment combined together to deliver a beautiful message in this design. Perhaps, it means ushering in change in one’s life through devotion.

You can opt for a shoulder phoenix tattoo design in a blue hue like the one shown in the picture. The plumage of the phoenix is detailed in a blue tint. The artist has opted for a watercolour inking style to portray the design. The face of the phoenix is beautifully drawn in black and its plumage is highlighted in the same shade. A blue phoenix stands for peace and tranquillity in one’s life. You can add burning flames to your blue phoenix to create a contrasting visual.

The fire bird is associated with the sun, the symbol of strength, energy, and power. The phoenix, enduring cycles of life, is symbolic of its resilience and appeals to those who have undergone transformations to emerge as more resilient versions of themselves. Pairing these mythical creatures with cute floral motifs not only gives them an awesome look but also enriches their meaning. You can add some variation to your phoenix tattoo by opting for different inking styles and colours. Have a look at these awesome phoenix tattoo designs to get ideas for your next ink!

What is the meaning of a small phoenix bird tattoo?

The small phoenix bird tattoo is a symbol of resilience and rebirth. It signifies the ability to rise from the ashes or to overcome great obstacles. The image of the phoenix bird also has connotations of courage, transformation, and strength. Additionally, it can be used to commemorate significant life changes or milestones that have been achieved. For some, this tattoo is a reminder to stay strong and persevere in the face of adversity. For others, it can be a symbol of hope or renewal. The small phoenix bird tattoo can have a deeply personal meaning for each individual who wears it.

What are some popular designs for small phoenix bird tattoos?

Small phoenix bird tattoos come in a variety of styles and designs. Some popular designs include an outline of the bird with colorful feathers or wings, a full-color illustration, and multiple birds in flight. The size and placement of these tattoos can vary depending on personal preference—they can be small enough to fit discreetly on the wrist or larger for a more prominent display. Some people choose to add other elements like flames, stars, or flowers to the design for an even more unique look. No matter what style you choose, a small phoenix bird tattoo will be a meaningful addition to your body art collection.

How much does a small phoenix bird tattoo cost?

The cost of a small phoenix bird tattoo will depend on several factors, such as size, design complexity, and the artist’s rate. Generally speaking, you can expect to pay anywhere between $50-$200 for a small phoenix bird tattoo. For larger designs or more complex work, the price may be higher. It is important to research the artist before making a commitment to ensure that you receive high-quality work at an affordable price. Additionally, be sure to factor in the cost of aftercare products when budgeting for your tattoo.

Is a small phoenix bird tattoo a good idea for a first tattoo?

A small phoenix bird tattoo can be a great option for your first tattoo, as it is both meaningful and low-risk. However, before committing to this design, you should make sure that the artist is experienced in executing smaller tattoos. Additionally, take the time to research possible placement locations and decide which one will suit you best. While a small phoenix bird tattoo is a great choice for a first-time getting inked, it is important to take all of these factors into consideration before making your decision.