10 Best Don’t Tread On Me Tattoo Ideas You’ll Have To See To Believe! 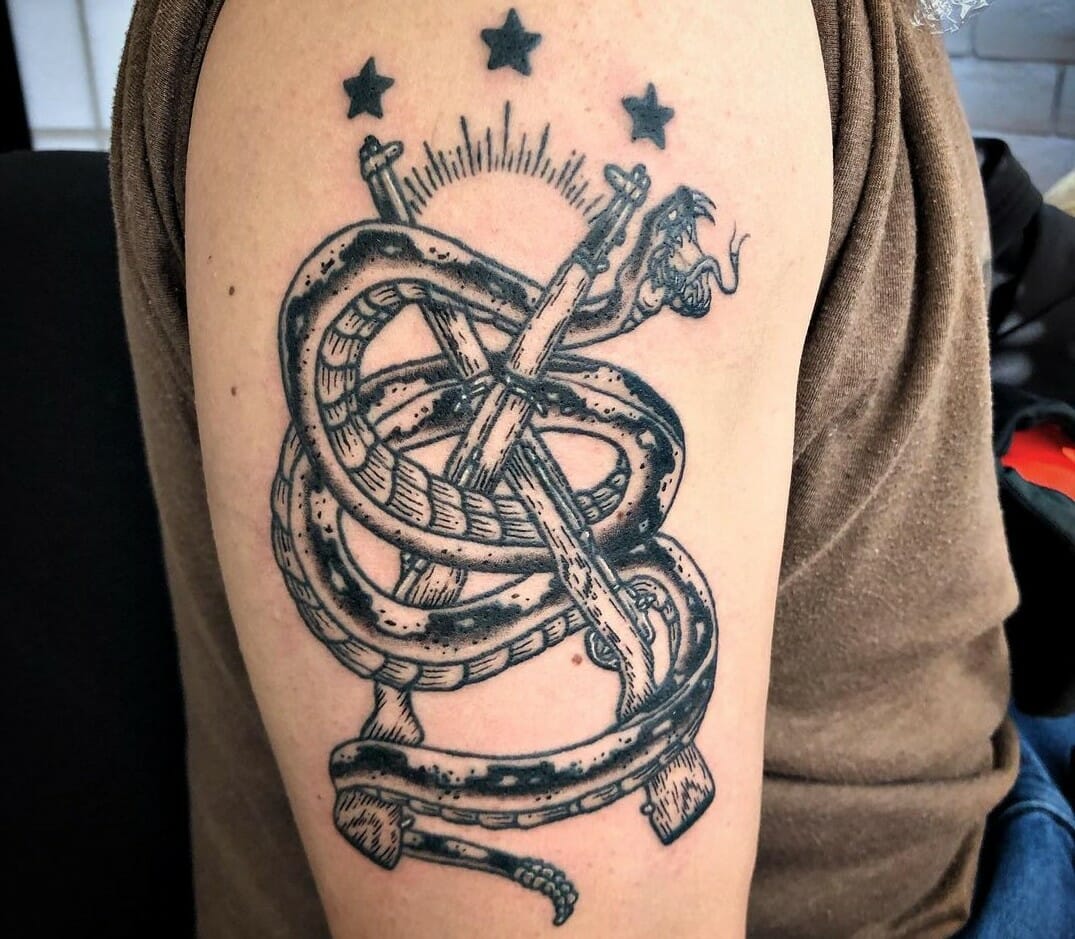 In search of some classic tattoo designs? Well, we have curated a list of the Gadsden flag tattoo for you to show off your rebellious self!

Don’t tread on me flag emerged in the 1970s America as a symbol of rebellion and expression of American patriotism.

The bright yellow flag displaying a rattlesnake ready to attack was named after its creator, Christopher Gadsden. It was first brought to public notice when hoisted on a warship, becoming a symbol of resistance against British colonial power.

The “Don’t tread on me” meaning has metamorphosed with the age and with the necessity that America faces. Gadsden means “tread” in “Don’t tread on me” as a synonym of “crush” “beat” “stamp over.” Thus, the rattlesnake is coiled and ready and will bite you if you step on it. Benjamin Franklin had made mention of this rattlesnake in the first political cartoon as he believed it aptly presented “the temper and conduct of America.” The stars and stripes of the American flag were then adopted by the people and the Gadsden flag remained as an artefact for rebellious spirits. First, it was used as a Libertarian symbol, then by the protestors of the American Tea Party Movement, to the present day emblem for the spirit of liberty, and for the military. Don’t tread on me (modern variations use the apostrophe) has thus become a sign of the time it was conceived in, and alludes to the socio-political context whenever it is used in the present day.

Celebrities like Aaron Lewis boldly show off their Don’t tread on me tattoo on the neck for maximum exposure. Similar to the Gadsden flag tattoo, many celebrities like Post Malone have opted for the Molon Labe tattoo, a classical phrase meaning “come and take.” The design mostly shows a knight’s armour and have often been coupled with the American flag to show patriotic sentiments. The tattoo is used by people associated with the military, gun lovers, and makes a great fit for tattoo enthusiasts in general. If you are someone brutally affected by the injustices around you and tend to celebrate your free spirit, the don’t tread on me flag tattoo is a better choice among the two. Keep reading to find suggestions and designs that you can draw inspiration from for your new tattoo.

Classic Don’t Tread On Me Tattoo

This is a classic representation of the Gadsden flag without its yellow backdrop. The snake is outlined and detailed carefully with black ink. Given the surface area required for this design, the back of your arm, biceps, and calf might all be good places to ink this one. You can also impart colour and the original yellow background if you like to go all the way.

Gigantic Don’t Tread On Me Tattoo

This is another monochromatic don’t tread on me tattoo. Sleeve is the appropriate place to magnify the snake tattoo, covering the entirety of your arm. The patterns are different from the first one, with more intricate details and shading. To add a little something to this design, try fonts that look sharp and rogue, rather than the old English as shown in the picture.

Don’t Tread On Me Tattoo On Wrist

If you want to showcase your “don’t tread on me” snake tattoo to its height, you may like this tattoo idea on your wrist. Simple, outlined in black, this snake sits on the back of your palm and displays its fangs in rage. However, if this design looks a bit old to you, you can always try and experiment with colours or use the red, blue, and white of the American flag.

Don’t Tread On Me Tattoo On Back

Since the back offers the most area for body art, you can save the upper back for this snake tattoo. Coiled around the American flag, this tattoo design clubs the Gadsden flag with the American. Reverberating the sentiments of its conception and its enforcement, this piece brings the age-old, original idea back to life. The fight that was against British colonization back then has now transformed itself into the fight against anything and everything that challenges or threatens liberty. Here, the idea is that the spirit of rebellion that is so ingrained in American soil will always spike up at the faintest hint of threat. It is a promise of protection and justice that you can etch on your body to celebrate your patriotism.

Don’t Tread On Me Tattoo From History

Here, the artist has portrayed the cartoon published by Benjamin Franklin during the freedom revolts in its very original essence. The snake is cut into eight parts, symbolic of the eight states of America that were not united back then. The phrase, “JOIN, or DIE” is a short yet powerful battle cry that urges the people of the nation to come together and work on strengthening the right. Franklin’s use of bold letters and the connotation that the word “die” carries, exhibit the urgency and the desperate situation that the country was facing. Transcending the boundaries of any political party, the slogan jarred people’s conscience and brought them together to see the truth in its crude form. You may get this snake tattoo inked on your forearm as is shown in the picture or you can place it on your thighs.

Don’t Tread On Me Tattoo With The American Flag

This one is another example that you can save for your Don’t tread on me tattoo. Against the backdrop of the American flag, this snake is hungrily looking and stays prepared for anything that may come and hinder its rights. The words that are added alongside the quintessential phrase, “liberty or death” is something that acts as a reminder of the past years and still holds immense significance in 2021.

Bold Don’t Tread On Me Tattoo With Snake Head

This is rather unconventional, yet a bold take on the Don’t tread on me tattoo. Amidst the words and the pitch-black background emerges the snake with its sharp eyes and looks right at you. There are no venomous fangs yet and it is as if the snake warns that one is sure to see them if they dare to tread on it. The tattoo can be seen as a way of portraying your personal attitude towards any intolerable action manifested through the snake. You can get this tattoo on your calf, as is shown in the picture, or even your upper arm.

This one is for the minimalists who would like to ink the Don’t tread on me slogan without actually going all in. This Gadsden snake is devoid of any particular detailing and embellishments. Rather, its beauty is in its simplicity and the good ol’ black outlining. The phrase is bold, yet in smaller fonts. You can place this tattoo on your forearm for the best exposure.

Dont Tread On Me Tattoo In Colour

Snake tattoos often avoid colours thereby increasing the magnitude of their lethality. But if you prefer your tattoos colourful and vibrant, you might want to take a look at something like this. This tattoo imparts a showy orange to the snake’s body on green grass. The contrasting colours draw attention to this piece that moves a little further than the flag yet conveys the message appropriately. This tattoo is suited for your calf or forearm, based on your preferences.

Geometric Dont Tread On Me Tattoo

This piece of art is devoid of the Don’t tread on me slogan that was typically seen in the Gadsden flag. However, the tattoo is particularly delightful to all who take a good interest in geometric aesthetics. The snake is intricately patterned that retains the stature of the flag and displays the quality of craftsmanship. This tattoo might also fascinate all whose personal preferences revolve around monochromatic tattoos. You can get this design inked on your back for greater surface area.

The Don’t tread on me tattoo is popular among those who believe in the libertarian spirit of the nation and also among those who believe it is an apt presentation of their true, rebellious self. Many have detested this slogan and there are many who tend to uphold its essence all through time. All in all, the Don’t tread on me tattoo is fairly popular and a rad idea to get inked with. Here are a few more suggestions for you to draw inspiration from: