10 Best Overwatch Tattoo Ideas You Have To See To Believe! 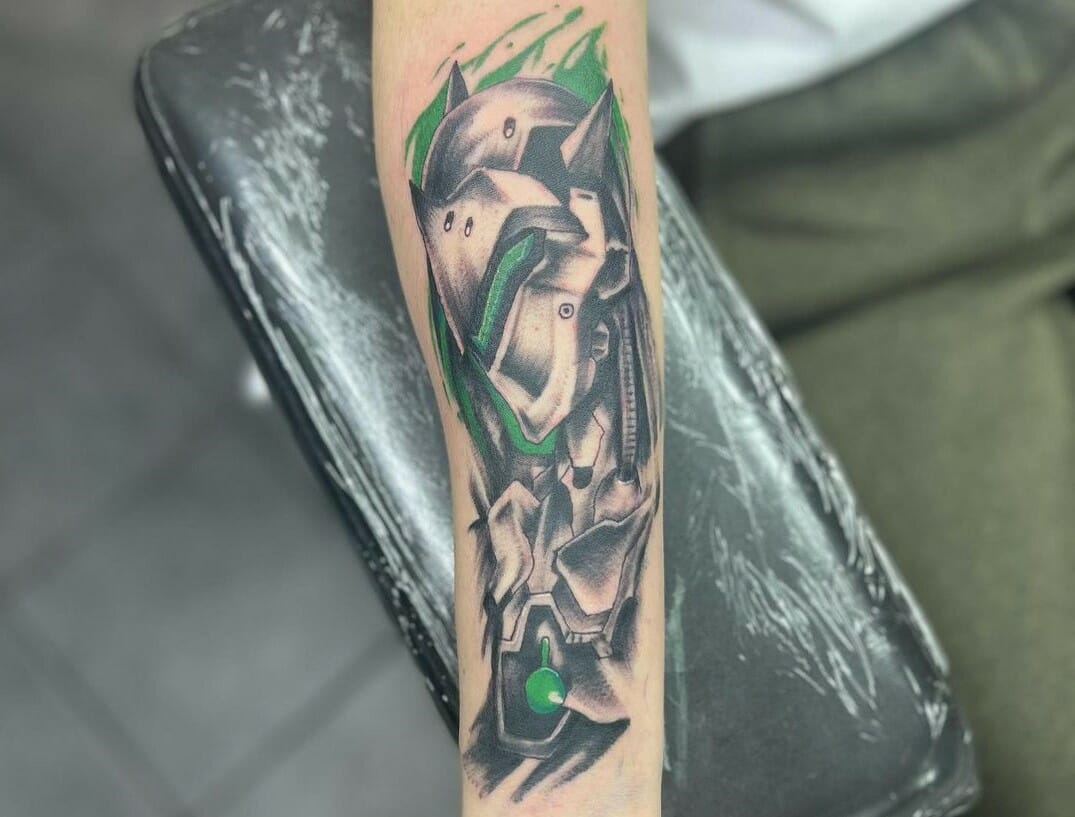 If you love playing video games and spend hours batting it out in Overwatch and are thinking of getting an Overwatch tattoo, you have come to the right place.

In the industry of fun multiplayer first-person shooter video games, Overwatch interests many gamers and needs no introduction.

Released in 2016, Overwatch is a team-based 6v6 shooter, with characters having their own unique abilities to use. The game is known to inspire a huge diversity of people due to the different characters. Combining fast-paced gameplay, interesting characters, and vibrant cartoonish art style, the game quickly became a huge success and is regarded as one of the best video games of all time.

What makes Overwatch an attractive video game lies mainly in the fact that its makers focused primarily to create a fun, competitive game, unlike other studios that mainly focus on just graphics. The accolades the game received speak for themselves. The cross-platform play gives a wide range of players access to the game, which created a wide community of quality gamers playing Overwatch.

The game also rewards players with loot boxes that spawn random cosmetic items to customize characters in the game. The cartoon-inspired graphics, the vibrant heroes, the widespread player base, and its popularity have made Overwatch tattoos an awesome option for the most hardcore fans. Gamers across the globe are getting creative, with a wide range of tattoos surfacing on the web. Although the entire lineup hasn’t been featured, the most loved characters have found a place in this list of Overwatch tattoos. If you identify as a hardcore member of the Overwatch and gaming community, then this list of curated Overwatch tattoos is for you.

Taking inspiration from goth culture and Halloween, this Mercy skin can be unlocked via the special holiday loot boxes in the game. This Overwatch Mercy tattoo perfectly captures the original spooky vibe in the game. Mercy’s iconic voice line “My Servants Never Die” is featured in a banner in the bottom part of the tattoo. The black, purple, and orange colour scheme are reminiscent of a typical Halloween-themed party. Her very recognizable smirk is prominent, but what would truly bewitch you are her piercing blue eyes, indicating the artist’s impeccable craftsmanship. This Overwatch tattoo is for all the Mercy stans who would like to show off their love for this awesome and badass girl.

Sombra is your go-to girl in the game if you need someone to be to stealthy cat and an absolute devastator at the same time. Her ability to hack and technical support skills make her a very easy pick for almost any situation. This graffiti art style embodies the street punk attitude of Sombra, which is portrayed in the game. The artist keeps things clean with intricate lines and very tasteful shading, highlighting every detail.

One thing is for sure that hardcore Overwatch fans all over the world would appreciate the Reaper puppet that she is holding, which is a popular emote in the game. It also is a nod to the Retribution release that uncovers the relationship between Sombra and Reaper. This Sombra tattoo is definitely one of our favourite tattoos present in this article. If you know an artist skilful enough to pull this one off, you should definitely give this awesome tattoo a place on your body.

This tattoo might be smaller, but in no way is it any lesser than any tattoo on this list. Pachimari has become an icon of the game ever since it came out, acting as an easter egg character inside maps. Honestly, this anime-style Pachimari tattoo is very charming and cute and can be a great ice breaker to start any conversation. Both Overwatch and anime fans will appreciate this beautiful example of a sweet and minimal tattoo that screams “UwU”. Despite being a nonplayable character, Pachimari is an integral part of the franchise and is an amazing option for anyone looking for a relatively small Overwatch tattoo.

Any Overwatch article is incomplete without mentioning D.Va and her neon burst world. D.Va’r arsenal includes booster cannons to launch her into flight and mini rockets to deal damage, similar to another famous hero that is Valkyrie from Apex Legends. The tattoo artist is able to catch the neon cyberpunk vibe of D.Va with very precise drawing and shading. The contrast between the skin tone and the highlights is in perfect balance, creating an artwork that pops right out of your body. The inclusion of Pachimari and Kawaii is cute for Overwatch fans around the world who would like to glam up their body with a D.Va tattoo.

Anyone liking humour in their tattoos would love this piece. It might not be the most pristine-looking tattoo, but the grim-faced death machine covered in a mist of pink hearts is absolutely hilarious and would crack anyone up. A character whose most iconic voice line is “DIE DIE DIE” would surely carry a deadly aura but it is very skillfully replaced by a blush pink lovey-dovey cloud of hearts. This tattoo is an example of the gaming community’s love for something with a funny edge, something truly meme-worthy. If you are one of such fun-loving fans looking for ideas for Overwatch tattoos, this oxymoron tattoo of the game’s most iconic damage hero is for you.

The Mei Tattoo For Dog Lovers

The makers of Overwatch left no stone unturned to cater to the wide variety of fans the game gathered over time. This Mei Corgi skin was introduced to unite all dog-loving Overwatch players. Mei’s cute girl next door vibe is a facade that hides a fearless damage-dealing character who can use ice as her weapon. This idea resonates with the female players who are overlooked during competitions but are usually fierce opponents to be reckoned with. Mei is a powerful character who should not be underestimated and is a sign of a strong and independent woman, and this tattoo is an example of meaningful Overwatch tattoos for a woman who is a fan of Overwatch.

The Greek Goddess Tattoo Of Mercy

Our second Mercy Overwatch tattoo in this list of Overwatch tattoos takes inspiration from the Greek portrayal of goddesses. We see Mercy’s blonde locks flowing and a golden yellow halo above her head. Her blue eyes look with determination into the distance to show her larger-than-life characteristic. The colours add up beautifully, the details are on point, and her famous punch line “Heroes Never Die” underlines this attractive Overwatch tattoo. This tattoo oozes out confidence and will be definitely worth the money for all Mercy fans across the globe who want to wear a tattoo of the beloved character from Overwatch.

The Tattoo for Widowmaker Mains

Widowmaker is a name that instils fear into the opponent’s mind at the start of a game itself, creating an advantage for your team. She is also the Overwatch gaming community’s one of the most popular damage-dealing characters and has her own massive fanbase for being an awesome hero to play with. This tattoo features a different headgear of a raven. The red highlights of the raven’s eyes and the background aura combined with her evil gaze give this tattoo a sinister look fit for Widowmaker’s notoriety.

This is a great example of tattoo artists adding their own tweaks to form a completely new design but also letting the original content stand out. This large tattoo can cover up a major chunk of your body, and one thing is for sure, it will turn a lot of heads. If you are looking to get inked, this Overwatch Widowmaker tattoo should be up for major consideration.

This selectively monochrome tattoo of D.Va is small, but it left us in awe of its uniqueness. It is a closeup of her face with her large eyes and face tattoos peeking in the frame. The face tattoo is the only portion having the iconic neon red colour, while the rest of the tattoo is monochrome.

One might think a monochrome tattoo isn’t right for subjects like Overwatch heroes, but this tattoo proves that skilful shading and details can make a tattoo as lively as using bright colours. The artist has beautifully portrayed the fun and lively emotions of D.Va in great depth. D.Va’s charming personality is what makes her an attractive choice among players who spend hours playing Overwatch. This D.Va tattoo will definitely stand out in a crowd of other Overwatch tattoos.

It’s safe to say that Zenyatta has achieved nirvana. There is nothing left for this friendly neighbourhood cyborg to do except being a strong ally in a game of Overwatch. The character has been considered to be one of the most played heroes among Overwatch fans in the past few years. This tattoo is designed in black and white, with extremely detailed lines and shapes. This makes it a difficult tattoo to get, but hard tattoos have a level of satisfaction that cannot be felt otherwise. Zenyatta’s orbs can be seen ready for a fight, so is his stance, which is also indicative of a fight. The tattoo seems to cover a healthy chunk of the body but is worth the time and effort. As a suggestion, adding yellow highlights to the orbs would elevate this tattoo to the next level.

Tattoos are a very personal way to show off your love for a subject by inking them on your body. Hardcore video gamers and Overwatch fans all over the world have gotten their tattoos, and now it’s time that you do too. Here are a few more suggestions from our end: