10 Best Middle Finger Tattoo Ideas You Have To See To Believe! 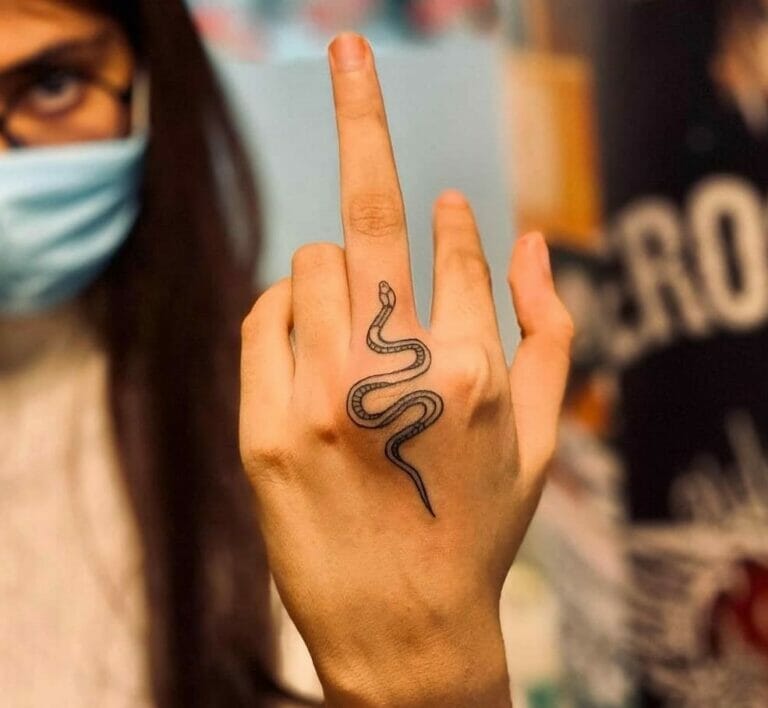 Middle finger tattoos are a bold choice, but they’re a perfect way to show your carefree and rebellious attitude.

A tattoo can reveal a lot about a person and can have a lot of personal significance. Did you know that Ariana Grande has a middle finger tattoo and so does Miley Cyrus?

Tattoos have been around for centuries, used as a form of body art, a means of expression, although in earlier times, they were only worn by heretics and people associated with the supernatural, they have grown in popularity and have become a symbol of protest and expression of identity. There are a lot of different types of middle finger tattoos you can choose from ranging from small dainty tattoos on your middle finger to large graphic tattoos on your body. You must however keep in mind that such graphic tattoos can affect your professional life negatively. As the saying goes, “think before you ink”.

Although a cross tattoo on the unholy finger does not usually mean rebellion towards God, a cross tattoo on middle finger meaning could be dependent upon individual perception, while many people might view it as a rebellious symbol, many just get it for good luck.

If you want a tattoo that tells the world to stay out of your business, then here are some really cool tattoos you should check out.

A Semi Colon Tattoo On The Middle Finger

This beautiful small finger tattoo is a perfect choice among small designs and is not as rebellious and is a symbol of solidarity against mental illness like depression, suicide, and addiction. This dainty tattoo is a great design if you’ve faced similar challenges yourself and have emerged victorious. This tattoo will serve as a great reminder of your courage and how you defeated the evils in your life. Or this could be in honor of a loved one to raise awareness about mental health issues. This semi colon is inked in black ink and has a simple, yet polished effect.

Here is a unique design for an arm tattoo! It is a rebellious tattoo as it is a modification of the original creation of Adam’s tattoo which signified Adam and God reaching towards each other. The original tattoo usually indicates the making of a new man which was inspired by a very famous painting by Michaelangelo. The modification showcases that instead of reaching towards God, the man who is placed on a lower platform than the Almighty is flipping God off. While might offend more than a few people, artistic interpretations are common when it comes to tattoos and paintings. It can still be a fun way to show your rebellion! The floral designs on the diagonal edges of the box round of the tattoo design quite well!

This unique tattoo design is an awesome choice if you’re a strong and carefree girl, who doesn’t care about other people’s opinions and lives life on her own terms. This tattoo has the words “Not your babe” scrawled inside the hand outlines. The little hearts around the design and shining, black nails add to the polished look of the tattoo. Although we must warn you that as cool as these butt tattoos look, they are just as painful this is because even though there are a lot of muscles and fat in that area and bones do not get in the way, there are a lot of nerve endings in each cheek making the process slightly uncomfortable. Butt tattoos, like these, take relatively longer time to heal. But this bold tattoo’s “no nonsense” vibe makes it an exciting tattoo design!

Small tattoos on the middle finger are all the rage right now, thanks to pop stars like Ariana Grande and Miley Cyrus. These tattoos can be a cute way to express yourself without being too bold or graphic. The cute ghost tattoo in the above picture is a stunning design, inked in thick black lines. This is among the cute but, deadly finger tattoos. Finger tattoos tend to hurt the most because of the absence of fat in the area, the needle hits too close to the bone making them extremely painful and uncomfortable and finger tattoos fade sooner than other body tattoos. You can keep in this mind as you pick your next design!

This is another inspirational and unique finger tattoo design that holds deep meaning. The one above is a beautiful, little tattoo that is a symbol of courage and victory. The square root of two means that the whole is greater than the sum of its part, the three tiny dots above the square root symbolize that three is indivisible. This is an example of how small symbol tattoos can convey a larger meaning. Who knew a profound mathematical concept can translate a person’s inner strength and invincibility as a tattoo? Well, now you can personalise this tattoo, too!

This cute butterfly tattoo almost looks like a finger-ring. Tattoos that look like rings have become increasingly popular in recent times especially as an alternative to wedding rings as tattoos are a sign of lifelong commitment and eternal love. Ring tattoos look really chic and modern and can really accentuate any of your bracelets or watched as they look like an inked piece of jewelry on your body. The butterfly is drawn in simple, black ink giving the tattoo a clean look. Wedding rings are beautiful and popular tattoo designs among young couples. A minimalistic middle finger tattoo, such as this is one of the simplest tattoo ideas for women.

This absolutely adorable and sassy tattoo is very eye-catching and is bound to be conversation starter. It features a young girl with both her arms and finger held out. The black work in this tattoo, especially the girl’s shining hair makes it look stunning. If you are looking for unique tattoo designs for women, then such a cool design is perfect for you. It is quirky, cool, and shows a very unique trait of your personality. This tattoo is an example of a black ink-free machine tattoo which means that it is etched into the skin without the use of any electronic machine. Such tattoos are also known as stick and poke tattoos, they are less abrasive on the skin and therefore last somewhere between 5-10 years depending upon the skills of the artist. These tattoos are less expensive and hurt less than machine-made tattoos. It’s best to work with experienced artists as these tattoos are more prone to infections.

This sassy upper arm tattoo looks very chic and badass. The heavy lashes and the shoes along with the the sparkles make this tattoo design to die for. This glamourous non-binary tattoo is a great way of expressing your sexuality and telling the world that you’re proud of your identity. The character has a bald head; beautiful, sparkling eyes and long eyelashes, with strong, muscular arms jutting out. Right below the head are the character’s legs in floral trousers and high-heeled shoes. This tattoo is inked here on the arm and bicep. This tattoo is inked in a black outline without any solid colour. With the growing support for the LGBTQ+ community, such tattoos have gained more popularity and is often worn as a pride tattoo.

This quirky skeleton tattoo made from colored ink is a perfect choice for a fun outgoing person, who believes that life is too short to stress and loves to party. The bright colors along with all the elements of this tattoo are super cool and you’ll instantly become the life of the party. The beer and the cigarette with the Hawaiian shirt and Mexican hat are a perfect party combo. What’s even better is that you can add any text of your choice, too. This tattoo would look great on your shoulder or upper arm. If you want a light-hearted tattoo as opposed to this bold, lively one, you can try a heart on middle finger tattoo.

This strong tattoo is a great choice for people who have a very strong and assertive personality and want to wear this aspect of their personality on their skin! The stag represents spiritual maturity and someone who has been through a lot of challenges in life and is now content with their spiritual self and achievements. The stag stands as a strong symbol of masculine fortitude and virile power. In many cultures, it also holds a religious meaning and significance. This stag tattoo has an amazing placement and is a common choice among men.

Middle finger tattoos are a great way to express yourself, although initially it was used as a phallic symbol over time, the meaning of this symbol has changed. Today, it has become a modern slang to express anger, rage, excitement, displeasure, and protest. Finger tattoos have gained popularity in recent times as they can be a good alternative to a real ring and their popularity is only growing. It is a great idea to get a finger tattoo as they are subtle and aesthetic. But you must keep in mind that finger tattoos cost more than regular tattoos and fade away much quicker and many tattoo artists do not recommend getting them. Here are some religious and regular finger tattoo suggestions, if you want to get your finger inked: