10 Best Beautiful Medusa Tattoo Ideas That Will Blow Your Mind! 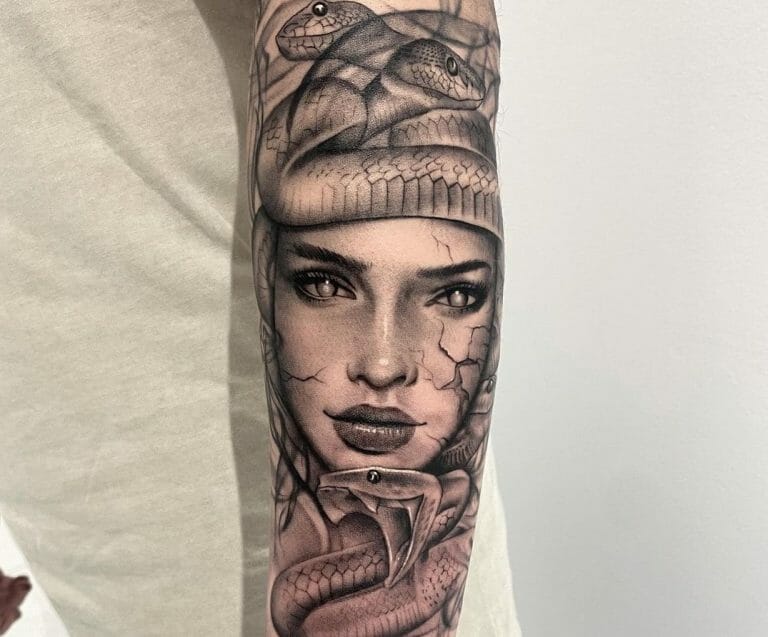 Do you want a tattoo featuring a strong and intriguing Greek character? Let Medusa tattoos lead the way to a symbolic tattooing experience.

Medusa is a highly misunderstood character in ancient Greek mythology and her image commands instant recognition throughout the world.

Though there are different versions of Medusa’s story and they are interpreted in many ways, her most prominent symbolic significance includes feminine power and transformation. The snake-haired maiden is often seen as an evil monster who turns people into stone with her gaze, but there is more to Medusa than this superficial notion.

According to the original Greek myth, Medusa was one among the three Gorgon sisters – they were winged females with venomous living snakes making up their hair, and whoever gazed at Medusa’s eyes, were petrified and turned into stone. But among the three sisters, only Medusa was mortal. So, the ancient version of the myth describes Medusa as an evil, monstrous figure. While a later version written by the Roman poet Ovid places Medusa in a much innocent position. The Medusa we reckon today didn’t always have snakes in place of hair according to Ovid’s Metamorphoses; rather she possessed an incredible beauty that enamoured every onlooker. But the sea god Poseidon brought tragedy upon Medusa by raping her in Athena’s temple, which infuriated goddess Athena. Athena’s jealous reaction didn’t harm Posiedon, instead, poor Medusa got cursed despite her innocence. Thus, Medusa was transformed from a beautiful woman to a monstrous creature with coiling snakes as hair and a fatal gaze that turned its beholder into stone. In most versions of the story, the Greek hero Perseus beheaded Medusa and used her head to defeat his enemies.

The snake-haired Medusa was misunderstood for many years and was negatively seen as a symbol of female rage. She was stigmatized for being raped, and this shows how society, to this day, blames women for men’s inability to control their lust. Therefore, Medusa remains an archetype of patriarchy’s desperate attempt to vanquish rebelling, raging, and powerful women, and label them as impure and nasty in order to maintain the power structure where men can dominate women and treat them as nothing more than sexual objects. So, often women who raise their voices against injustice against women or mistreatment of women – people portray them in the likeness of an evil Medusa in a demeaning manner.

But times are changing, even if at a slow pace. The Medusa story told in the ancient Greek myth isn’t widely accepted anymore. People now recognize Medusa as the beautiful woman who was unjustly cursed and isolated. Perspectives are changing and many women have reclaimed Medusa’s visage as an emblem of female power, strength, wisdom, individuality, and rage. In recent years, Medusa has emerged as a symbol of women’s inextinguishable fury in the face of misogyny. Quite naturally, when it comes to body arts that represent your inner spirit, or your ideologies, or something that you strongly want to convey, going for a Medusa tattoo is a wonderful choice. There are a wide variety of Medusa tattoos – unique in designs and their own delineations.

Vaporwave was in trend back in 2012, and many of you are acquainted with its characteristic visual art style that involved glitch effects, 3D rendered objects (mostly a sculpture), or animes. Incorporating an image of a Medusa sculpture with the vaporware glitch effect in your tattoo is a unique idea. This Medusa tattoo is meticulously done with the dot work method and the result is absolutely stunning. Well, technically Medusa is meant to stun people with her gaze right?

Medusa’s wrathful gaze didn’t just originate out of nothing. She was wronged by a society that never punishes men for their sins and isolates women instead. Her wrath, her anger, her frustration are just and her wrongdoers should be afraid of her. This ravishing Medusa tattoo done with the dot work method highlights her gaze that holds so much power that it turns people into stone. The ice-cold gaze, devoid of any benevolence is beautifully portrayed through the light blue ink. Wearing this Medusa tattoo will automatically fill your inside with a sense of immense power and strength.

Now here’s a Medusa tattoo that will fill your heart with satisfaction. You must know about Cellini’s famous statue situated at the Loggia dei Lanzi, in Florence, Italy, where Perseus is seen holding Medusa’s head in a victorious posture. In 2008, an Argentine-Italian artist named Luciano Garbati built a statue of Medusa with the head of Perseus in one hand and a sword in her other hand. Her posture is not triumphant – she isn’t showing off the fulfillment of her revenge to the world in the manner Perseus is in Cellini’s statue, but she is radiating an energy that subtly gives out a message to patriarchy. This Medusa tattoo might have taken its inspiration from Garbati’s inversion of Medusa’s fate. But it’s mimicking the posture from Cellini’s statue, only it’s Perseus’s head in Medusa’s hand. The Medusa tattoo has intricately portrayed the bronze-like texture of the original statue. It screams out the triumph of women over patriarchal violence.

Fine line tattoos appeal greatly to one’s aesthetic sense. This fineline Medusa tattoo is ideal for minimalism lovers who want to keep it simple yet striking. Medusa is a powerful feminist symbol, and this small Medusa tattoo depicts Medusa’s face, not as a monster but as a beautiful snake-haired maiden. Reclaiming the story of Medusa from the Greek lore and restoring Medusa’s status as a strong, independent woman unafraid to unleash her fury upon her culprits has been a courageous step. Medusa tattoos should be celebrated as a protective symbol and powerful emblem of women standing up against injustice and male tyranny.

Perseus With The Head Of Medusa Sculpture Tattoo

If one sees Medusa as a symbol of evil, then he might get this Medusa tattoo to symbolise Perseus’s bravery and courage. But if you’re not a fan of Perseus and want to memorialize Medusa and her ultimate fate manifested in a tattoo, as a reminder of how men mistreat women for their own whims and brag about it as something heroic – you might consider getting this Medusa tattoo. It is not meant to keep you calm, but to make you rage against all the repression women face every day.

The Versace Medusa logo is also one of the most well-known symbols of the 20th century. It is instantly recognizable by anyone with even the slightest interest in fashion. Gianni Versace certainly knew how to make a statement, and what better way to do it than with a snake-haired woman staring at you? This Versace Medusa tattoo doesn’t exactly follow the linework design of the Versace logo, rather it has been given a more realistic effect by filling in with black and grey ink and using highlights.

Medusa was a victim of Poseidon’s assault and Athena’s rage. After she was turned into a monstrous creature, she had to spend her life in isolation. The physical and mental torment she went through is unimaginable. This Medusa tattoo has illustrated Medusa’s agony through her tears. The flowers here symbolise her innocence and blamelessness. This Medusa tattoo does not show women as weak or a crybaby, but it depicts the incessant pain that makes a woman so desperately furious. The tattoo artist has done an amazing job by flawlessly inking the intertwined serpents. It’s a little different from a typical Medusa piece as it depicts her in not an infuriated manner but in a state of pain and suffering.

Who said Medusa tattoos only have to be fearsome? This cutesy mellow Medusa tattoo will melt your heart. It shows Medusa as a beautiful maiden instead of her usual angry demeanour. Doesn’t matter how others view Medusa, if you look up to her as a symbol of astounding beauty, transformation, and freedom, then this Medusa tattoo with its bold lines and the shades of red to bring out her blushy cheeks would be a great choice.

The tattoo artist behind this Medusa tattoo clearly understood the assignment and did a tremendous job capturing the symbol of female power – a raging Medusa with venomous snakes as hair. This Medusa tattoo is eye-catching and the best placement for this tattoo would be the forearm. The beauty of women doesn’t always have to be in their tenderness or delicate countenance. Their beauty can be captured in their indignation as well. This Medusa tattoo is a perfect example of that. It has captured Medusa’s terrifying aura in such a bewitching manner, that it is bound to make people fall in love with it. Medusa was not a goddess, she was a mortal human turned monster. But she was better than the goddess Athena who cursed her into this life. Most people wouldn’t want to worship this version of Medusa as they would worship a goddess. But women who draw strength and inspiration from Medusa would certainly venerate her raging avatar. The real impact of this Medusa tattoo makes its symbolic importance even stronger.

Medusa has become one of the most well-known mythological characters in history, and she is immortalized in art all over the world. Her face is striking, with piercing eyes and elaborate hair, but her most striking quality is her head full of writhing snakes. When you decide to get a Medusa tattoo, think about why you want the tattoo in the first place. Do you consider her to be an icon of female empowerment? Or is she just an intriguing colossus to you? The intent behind your Medusa tattoo will make it easier for you to choose a look.

There are so many ways to portray Medusa in a tattoo, which makes her the perfect subject matter. Medusa tattoos are popular among ladies who want to stand out, and the design can be modified to look like anything your imagination comes up with. Medusa tattoos are usually geared toward women. These tattoos are often etched in dark, rich colours. Some designs come with jewel tones, including emerald greens, ruby reds, and sapphire blues. The tattoos can be colourful or black ink and feature bright colours or gray-scale shading. There are several ways to interpret Medusa, including giving her a face of an angel or monster. She can be portrayed with realistic features, or she can have a cartoon face. Her hair can be shown as snakes or braids, and her body may appear to be covered in snakes. Medusa tattoos can even incorporate other elements such as flowers and butterflies.

Pick your favourite rendition of Medusa and you will find a unique tattoo that’s otherworldly yet charming. Here are some related tattoo ideas for you to check out: