101 Best Medusa Thigh Tattoo Ideas That Will Blow Your Mind! 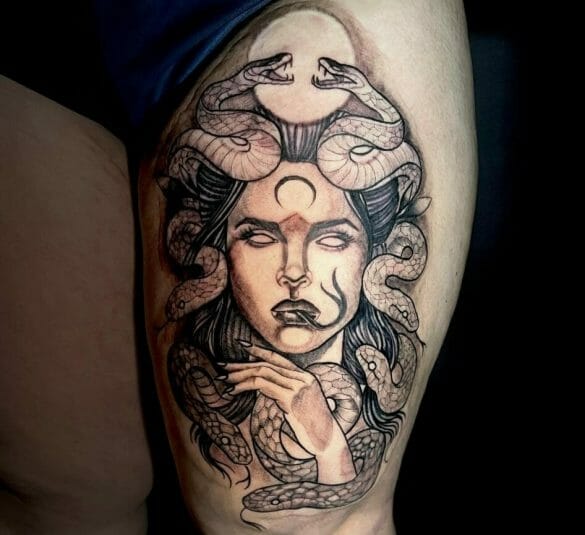 Are you in search of some ravishing Medusa thigh tattoo designs? Here is an end to your search as we’ve handpicked the best tattoo ideas for y’all!

Medusa is a mythical monster-like creature from Greek mythology.

She used to be a beautiful maiden. She was so beautiful that even gods used to fall in love with her.

One day the God of the Sea, Poseidon took Medusa to Athena’s temple. This made Goddess Athena furious. And in anger, Athena cursed Medusa that she will lose her beauty and will become a monster. And so happened, she turned into a monster and her hair changed into venomous snakes. And whoever saw the face of Medusa would be turned into stone. And in the end, she was killed by Perseus.

Medusa’s story is a good inspiration for creating various tattoo designs. As she is a symbol of female power. Medusa tattoos are also used against negative or evil energy as well as dangerous threats. It is used as an evil eye. Here are a few Medusa tattoo ideas for you people.

Medusa is one of the most famous characters in Greek mythology. A Medusa tattoo will portray ancient Greek art and it will make the tattoo on you look more anesthetic. Here is a unique design for y’all!

This is a classic as well as a traditional tattoo of Medusa. The tattoo artist has made use of jet black color to ink this tattoo art. In this tattoo piece, Medusa does not have any eyeballs and her eyes are entirely white. Under her eyes, she has some black stripes which are coming down towards her face. Her lips too are inked with black color. On her head, there are many dangerous venomous snakes. The eyes of the snakes seem to be deadly. Few of them are opening their jaw to attack their predators. The snakes are also done with the help of jet black color and their scales are linked with the help of a lighter shade. Medusa is wearing a stone ornament around her neck and this ornamental piece is adding a cherry to the entire tattoo. So women in search of a simple Medusa thigh piece can opt for this stunning design.

In this thigh piece, Medusa has a very bold and powerful face. Her eyeballs are greenish-yellow which is close to the eye color of reptiles. Along with that, she has big and pretty eyelashes. She has a sharp nose, cheek lines, and jaw lines. And her face has been highlighted with white ink to make her facial features sharper. She is wearing cross earrings and there is a moon on her forehead. The entire face and hair of Medusa have been inked with black color. Whereas the snakes on her head are drawn with red ink which is making them look more frightening.

Medusa’s beauty was very well known in ancient Greece. The Sea God Poseidon got mesmerized by her beauty. After turning into this monster she lost her beauty but in this tattoo, the tattooist has tried to restore her beauty even though she has been portrayed as a monster. Here she has a very lifted and sharp facial. There is an inverted crescent Moon on her forehead. And her canines have turned into snake-like teeth which are protruding out of her mouth. There are four dangerous and venomous snakes on her head. She is a powerful symbol to portray a powerful woman in our society. So getting a Medusa tattoo will show how powerful you are as a woman.

Here is one more colorful Medusa tattoo design for those who love vibrant and bright tattoos. In this tattoo, the tattooist has inked green snakes all over the hair of Medusa. The snakes also have red mouths as well as tongues. Medusa here has very brown eyes with green eye makeup and a red tint on her cheeks and lips. She has two snake-like teeth that are protruding out of her mouth. This tattoo does not have a very scary look on its face and will be loved by those who want a less frightening tattoo.

In this Medusa tattoo, the tattoo has drawn the face of this monster on the entire right thigh with the help of black ink. She does not have any eyeballs and her eyes are white. On her forehead, there is a very thin inverted crescent-shaped moon and she has a tongue that resembles with snake’s tongue. There are snakes all around her hair and hand. The scales of the snakes have been done with the help of a lighter black shade and this is enhancing the look of this entire tattoo.

At times the traditional black and white tattoos become very monotonous therefore people especially the young generation are willing to get something that is more colorful and vibrant in appearance. Here is one of the most vibrant Medusa tattoos one will ever come across.

In this Medusa tattoo, the tattoo artist has drawn a pretty young and modern lady with green hair. And all over her hair, there are green poisonous snakes. In this tattoo, Medusa has a very modern look. She has green eyebrows with a piercing across them. She has yellow eyeballs along with bold purple eye makeup. She is also wearing purple lipstick. And there are more piercings on her nose and lips. Across her neck, she is wearing a choker that has a silver ring and pointy spikes. And her neck is covered with nets. The tattooist has used very bold colors to make the tattoo lively. Here Medusa has been given a very modern makeover and this tattoo design is perfect for the young girls right out there. This is a perfect fusion of mythological character with modernization.

There are many women out there who like and want a full-thigh tattoo. These types of tattoos cover the entire upper thigh, side thigh, and r thigh regions. So here is a very unique and interesting full-thigh tattoo design of Medusa.

In this tattoo, the upper thigh has geometrical circular patterns just below that there is the face of Medusa with many snakes on her hair. The snakes are quite thick and scary in appearance. Medusa has a few bruises on her face. From her neck to the lower thigh region there is mandala art. The entire tattoo has been made by using only black ink.

Medusa was a member of the Gorgon. Medusa along with her two other sisters Stheno and Euryale formed the Gorgon. They had a very frightening appearance and whoever had seen the Gorgon had been transformed into stone. For those who love scary tattoos here is one of the scariest Medusa tattoo designs for you guys.

In this Medusa tattoo, the artist has made the scariest Medusa tattoo one will ever come across. Her eyeballs are white and from her eyes, blood is dripping down her face. Besides the blood droplets, there are many scratches on her face. Her tongue is protruding out and her tongue is divided into two parts. This exact kind of tongue is owned by many reptiles like snakes. This particular tongue of Medusa is making the tattoo scarier. On her head, there are many dangerous and venomous snakes. The entire body art has been completed with the help of black ink. Girls fond of a spine-chilling tattoo can choose this thigh piece.

Thigh tattoos are generally considered to be large by few people but some people love to keep their tattoos small. So for small tattoo lovers here is a small Medusa-designed thigh tattoo.

This small Medusa tattoo has been inked on the upper thigh area by the tattooist. A very subtle shade of black has been used to ink this body piece and which is making it more tranquil and attractive. Here Medusa does not have any scary rather she has a still expression on her face. Her lock is made up of thin snakes. Above and below her head there are fa ew geometrical patterns like circles and dotted lines. So if you were in search of a small and simple tattoo then this is the best suitable tattoo for you.

Moon tattoos are often associated with growth and change one has to face in their lifetime. Whereas a Medusa tattoo is a feminist symbol that represents powerful women. Hence these two elements together give out an interesting meaning to this tattoo design.

In the tattoo the side face of Medusa is visible. Here her facial expression is very different from other Medusa tattoos where Medusa used to have a very frightening expression on r face which could have easily scared a normal human. Here in this tattoo, Medusa herself is scared of some and which is very evident on her face. There are many snakes on the head of this vicious monster and tears are rolling down her cheeks. Behind her, there is a crescent-shaped moon which has been done in black ink. So if you are looking for something different then this is perfect for you!

Medusa is one of the most prominent mythological characters from Greek mythology and Roman mythology therefore there are many stylish Medusa tattoo ideas available in the tattooing industry and those have been enlisted below.

What is a medusa thigh tattoo?

A medusa thigh tattoo is a type of body art featuring the image of the legendary Greek Gorgon Medusa. The tattoos usually feature her distinctive features such as her long, coiled hair, serpentine eyes and a snake-like tongue. They are often depicted with an angry expression or holding a shield in front of her face.

What does a medusa thigh tattoo mean?

A medusa thigh tattoo is often seen as a symbol of strength, protection and resilience. The legend of Medusa was one of a powerful woman who fought against the patriarchy and refused to be silenced or repressed. The tattoo can also represent courage in the face of adversity, wisdom in difficult situations, and standing up for yourself even when facing the odds. The medusa tattoo is often seen as a reminder to never back down when faced with adversity and to always stay true to yourself.

How much does a medusa thigh tattoo cost?

The cost of a medusa thigh tattoo can vary depending on the size, complexity, and placement of the design. Generally speaking, small tattoos can cost between $50 to $200 while larger designs can range from $200 to $500 or even more. Prices may also increase if you opt for additional colors or special effects in your design.

What are some of the best medusa thigh tattoo designs?

Some of the best medusa thigh tattoo designs combine classic symbolism with modern interpretations. Popular designs often incorporate elements such as hearts, roses, skulls, or snakes to create unique and meaningful tattoos. Other popular design elements include intricate patterns or geometric shapes which can be used to give the medusa an air of mystery. Many people also opt for a unique color combination to make their medusa tattoo stand out. Additionally, some people choose to incorporate Greek lettering or other symbols into the design to further personalize the piece and give it an extra special touch.