101 Best Greek Goddesses Tattoo Ideas That Will Blow Your Mind! 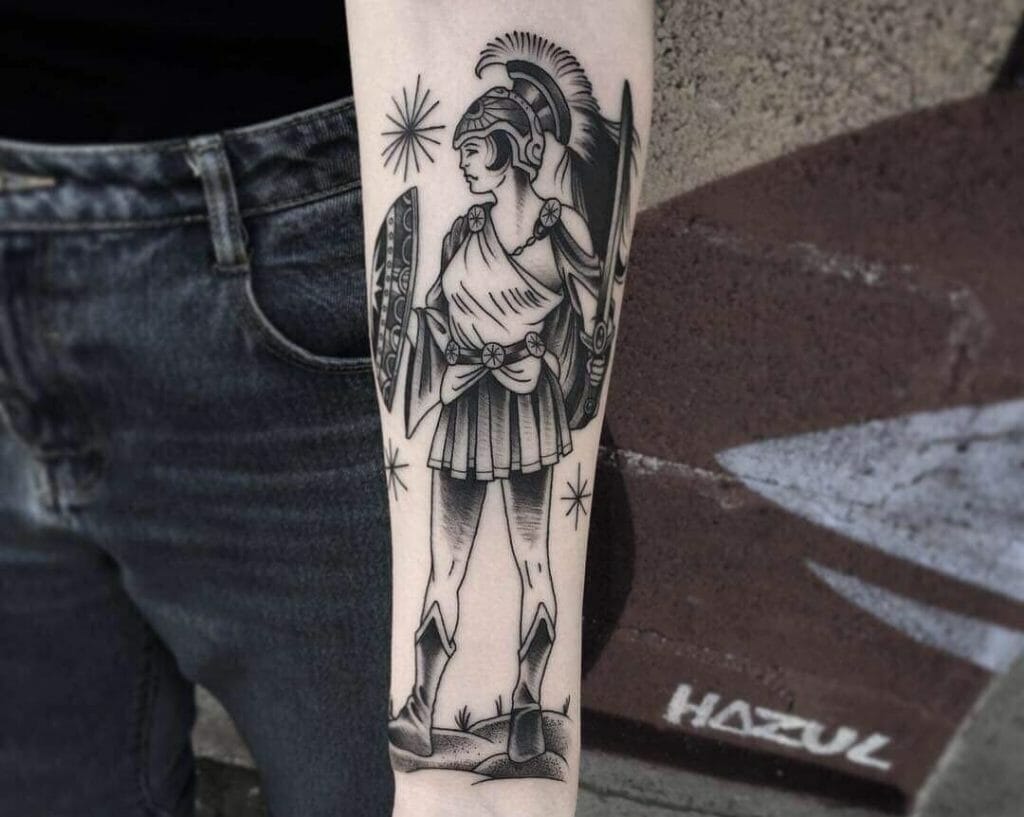 If you are interested in Greek Mythology, especially the amazing Goddesses, then these Greek Goddess tattoo ideas are just what you need.

Greek mythology has a lot of fans across the world.

The Ancient Greek culture has some amazing Gods, Goddesses and other deities that are very interesting. They all have cool stories that make them very fascinating to us.

All Ancient Greek Gods and Goddesses have different powers and human affairs that they look over. Not only that but we also see them having human characteristics and emotions that we can relate to. Sometimes they are kind and just, and sometimes they are cruel and unjust. This whole dichotomy makes Greek mythological characters so fascinating to learn about. There are a lot of people around the world that are engrossed in Greek mythology. Greek Goddesses are in no way lesser than the Gods. They are smart and beautiful ladies that have many complexities that make them compelling to the average person. If you are also a fan of the amazing Ancient Greek goddesses and their stories, then we have the perfect thing for you. Here are ten amazing Ancient Greek Goddess tattoo designs that you are going to love.

The Greek Goddess Aphrodite was believed to be the Goddess of beauty and sexual love by the Ancient Greeks. But in some places, she was also believed to be the Goddess of seafaring and also the Goddess of war. Her Roman counterpart was Goddess Venus. Aphrodite was a beautiful Goddess and this neo-trad tattoo of her captures her beauty perfectly. The details and colours of this tattoo are amazing. It is very vibrant and captures the essence of the Goddess in this amazing style. The tattoo is vibrant and would look amazing on anybody’s arm. The neo-traditional style is very suitable for this type of tattoo. If you want to get other Greek God tattoos in this style then you can do that as well. Be sure to find an artist who specializes in this style and talk to them about exactly what you want before getting the tattoo.

Athena, the God of War Tattoo

In Ancient Greece, Athena was the God of Wisdom and War. She was also the patroness of the Ancient Greek city of Athens, which is now the Capital of Greece. Somewhat ironically, as a Goddess of war, she was also associated with peace and handicraft. This black and grey Athena tattoo show Athena with a spear, which was believed to be her weapon of choice throughout Greek Mythology. Like Aphrodite, she is also one of the most important deities of Greek mythology and lived on Mount Olympus with 12 other important Gods and Goddesses. This tattoo has intricate details and features one of her symbols that is her spear. Other symbols of this Wisdom Goddess are Olive Trees, Owls, Snakes and many more. If you want a more subtle tattoo of the Goddess then you can also choose to get them. But if you want a similar tattoo to this then find a tattoo artist that can make your tattoo dream come true.

In Ancient Greece, Hera was the Queen of the Olympian Gods and the wife of Zeus who was the King of Gods. She was also the Goddess of Marriage and of the life of women. She was mainly worshipped as the queen of heaven and was a very powerful goddess as well. She is still one of the most famous Greek Gods. This tattoo features a broken Hera statue face and it has a lot of details that make it look amazing. It is done in black ink and still has a lot of depth and details. If you love Greek Mythology tattoos, then this tattoo idea is perfect for you. But if you want a Hera tattoo in a different style, then you can also go for that as well. Just consult your artist and get exactly what you want. You can also get a Hera and Zeus tattoo.

Artemis was believed by the Ancient Greeks to be the Goddess of hunting, wild animals, vegetation, and of chastity and childbirth as well. She was the daughter of the King of Heaven Zeus and of the female Titan Leto. She is also the twin of the Greek God Apollo. Amongst the rural population of Ancient Greece, Artemis was the most popular. She was an amazing Goddess that had power over a lot and if you are a fan of Artemis, then this black and white portrait tattoo of her is perfect for you. It features not only Artemis but her symbol Arrows. It also has the moon which is another symbol of Artemis. If you want a more subtle tattoo, then you can go for these symbols as well. Some other symbols of Artemis include bow and arrows, cypress, hunting knives and deer.

In Greek mythology, Persephone was believed to be the daughter of the Goddess Demeter and Zeus. She is also associated with her husband Hades, who is the Greek God of the underworld. It is said that when Persephone comes back from the underworld for a few months, the Spring season comes along with her. She is often seen with her husband Hades. This tattoo captures the beauty of Persephone and all she is associated with very well. It has elements of her Spring Goddess self as well as her Queen of the Underworld self. This tattoo has a lot of amazing details and would look fantastic on anyone’s arm or forearm. But if you want a Persephone and Hades tattoo, then you can choose to get a Hades and Persephone back tattoo as well. They are one of the most popular gods from Greek mythology in the modern era.

In Greek mythology, Gaia was the Goddess of the Earth. She was the mother of all life. Her name is also spelt as ‘Gaea’. She is the personification of Earth and hence all her human forms are often seen with the Earth in her arms. In this amazing tattoo of Gaia, she holds the world between the palms of her hands. This tattoo has some amazing details. You can choose to get this tattoo on your arm or your chest. If you want a bigger piece in the same style on your back, then you can also ask your artist to make you a tattoo design that suits your preference. You can also choose to get other Greek Gods tattoos in the same style if you want.

According to the Ancient Greek culture, Hestia was the virgin Goddess of family, home, domesticity, the state, but most importantly, the Greek God of Hearth. She is also the sibling of Hera, Zeus, Poseidon, Demeter, Hades and the daughter of Cronus and Rhea. This tattoo shows her holding a bowl filled with flames which is equivalent to her being the Goddess of hearth and keeping all fires burning. She is a beloved Goddess and the tattoo design portrays her perfectly. The black and grey bring out amazing details on the skin. You can also choose to get other Greek God tattoos in this style, just talk to your tattoo artist about what you want. If you want a more subtle Greek God tattoo of Hestia, you can get a hearth and fire tattoo which is her symbol.

If you are a Greek mythology tattoos fan, then you would like this detailed piece of the Goddess Hecate. Hecate was a very cool Goddess of magic, witchcraft, ghosts, the Moon, Necromancy and the night. If you are a fan of Hecate and her dark businesses, then you would love this Greek mythology tattoo of her. This Ancient Greek tattoo shows her with a snake under the moon with two other personas on each side of her. You can also add some Greek symbols to the tattoo to make it more interesting. The tattoo style is really amazing and you can get Athena tattoos, Aphrodite tattoo, Apollo tattoos, Zeus tattoos, Medusa tattoo, Poseidon tattoo and many other Greek Gods and Goddesses tattoos in this style. Just make sure to find an artist who can do justice to this style.

Nyx, in the Greek culture, is the Goddess or the personification of Night. This tattoo of her profile is amazing as even though it is small, it has amazing details and captures her personality perfectly. If you like shoulder tattoos, then you can get a crescent moon on your shoulder as it is her symbol. It is a more subtle way to show your love for Nyx. This tattoo is pretty small and you can get it without much pain and it will heal quickly as well.

Nike is the Goddess of Victory in Greek culture. She is the daughter of Pallas the giant and the River Styx. This Nike tattoo features her headless statue which has beautiful wings and looks very powerful. If you like tattoos of Greek statues, then this tattoo idea is perfect for you. You can also get tattoos of her symbols that are wings, golden sandals and wreaths.

If you have read the article and still have not found your best Greek mythology tattoo, then we have a few more ideas in store for you.

What is the meaning of a Greek goddess tattoo?

A Greek goddess tattoo is a type of tattoo that is based on the ancient Greek mythology. These tattoos are often chosen as a representation of strength, power and beauty. They can also symbolize wisdom and protection from harm. The most popular Greek goddesses used for tattoos include Athena, Aphrodite and Hera. Some people choose to get multiple goddesses tattooed together, creating a unique and powerful design. Greek goddess tattoos are often chosen for their ability to represent different aspects of a person’s life or personality. They can be used as meaningful symbols of inner strength, courage and guidance. No matter the reason, this type of tattoo is sure to leave a lasting impression.

What are some popular Greek goddesses to get tattooed?

Where is the best place to get a Greek goddess tattoo?

The best place to get a Greek goddess tattoo is at a reputable and experienced tattoo parlor. It’s important to do some research before committing to a particular artist, as the quality of their work can heavily influence the end result. Make sure they have experience in doing similar tattoos and that the shop is both clean and professional.

How much will a Greek goddess tattoo cost?

The cost of a Greek goddess tattoo will vary depending on the size and complexity of the design. Generally speaking, most small tattoos can cost anywhere from $50 to $200, while larger or more complex designs may cost up to $1,000 or more. Make sure to discuss pricing with your artist beforehand so that you know exactly how much your tattoo will cost.