101 Best Anubis Tattoo Ideas You’ll Have To See To Believe! 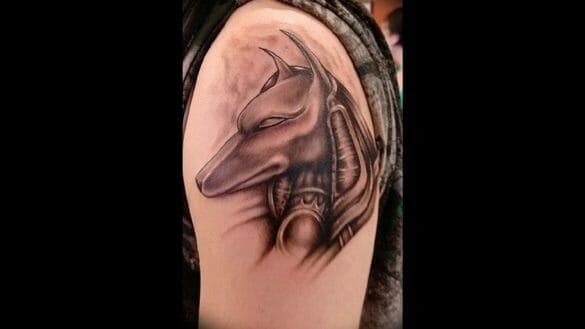 If you are into ancient mythology and are looking for inspiration for a powerful Egyptian tattoo ripe in symbolism, an Anubis tattoo is just what you need.

Anubis – the ancient Egyptian God of the dead and the afterlife – is perhaps one of the fiercest and most well-known figures from one of the world’s oldest mythologies.

We are all aware of how much ancient Egypt continues to baffle philosophers, researchers, and scientists alike. Even in the 21st century!

And myths, legends, and Gods from the ancient land continue to be a major source of inspiration for literature, art, architecture, and even tattoo designs.

You might remember the 2011 television series House of Anubis? Where young teenagers living in an English boarding school discover the house’s mysterious secrets rooted in Egyptian legends.

This is only one example of the popularity Anubis has enjoyed in pop culture. So, it should come as no surprise that the Anubis Egyptian God tattoo has been one of the most demanded tattoos among people looking for a complex drawing with a deep spiritual connection.

Anubis tattoo designs are edgy, cool, intricate, meaningful, symbolic, and pure amazing – all at once. Below are some unbelievable Anubis tattoo ideas that are sure to blow your mind.

In ancient Egyptian mythology, Anubis features as a man with a black head of a canine or jackal.

The black color represents the fertile soil of the River Nile, the bedrock of agriculture amidst the desert, and as such, is a symbol of good fortune and rebirth. In keeping with the thought, the Egyptians believed in, the tattoo of the Egytpian jackal god designed in hues of the blue can makes for visually stunning body art. This Anubis tattoo is a treat that’s hard to beat.

But if you are looking for a more quirky, modern-day take in the same Anubis tattoo category, then this funk-inspired, vibrant Anubis head would up your tattoo game by leaps and bounds!

The ancient western philosopher Plato spoke fervently about how the soul continues with life after the physical death of the body. This popular anubis tattoo inspired by the Egyptians represents the principles of order, peace, and balance. The anubis tattoo stands for the basic principle of how the ancient Egyptians held life and death in equal importance. If you have a philosophical inclination then this tattoo is a constant reminder of the impermanence of life. After all Anubis, as the eternal guardian and guide responsible for the smooth passage to the afterlife, played an important role in the cycle of life and death.

This popular tattoo of the Egyptian god Anubis comes with the added ‘ankh’ symbol. The ‘ankh’ symbol representing life is recurring imagery in Egyptian culture and coupled with the image of the Anubis in the tattoo serves to bring about that balance of life and death.

So if you are a believer of the afterlife or like to wear a symbol of power, protection, and ferocity, then this one is for you!

The Justice-Themed Anubis Tattoo For The Righteous Ones

Some tattoos are so vivid, that they have to be seen to be believed. Such is the case with these justice-themed Anubis tattoo designs. The tattoo represents the God of the Dead in his awesome glory and comes loaded with a wide range of Egyptian hieroglyphs. The backdrop of a judicial scale balancing life and death is a perfect metaphor for the things Anubis stands by. If you are interested in getting a tattoo that represents life, death and all in between, do check out this tattoo.

The Royalty-Themed Anubis Tattoo For The Kings And Queens

If you are interested in body art involving dark imagery, then this awesome anubis tattoo is bound to impress you. This detailed tattoo shows Anubis in his full glory with his staff and the ‘ankh’ symbol. The pyramids at the bottom of the main tattoo reinforce the legacy that the God of the Underworld has with Egyptian civilisation. Truly a royal tattoo for all occasions.

The black and grey Anubis tattoo, seen above, is a mighty representation of these themes. And this Anubis tattoo is for everyone really because we are all Kings and Queens in our own unique ways!

A slightly more artistic variation in this category is this Anubis tattoo which shows Anubis breaking through a wall that is replete with Egyptian hieroglyphs.

What is particularly striking about this Anubis tattoo, apart from the play of colors, is that the body becomes an active part of the sketch.

Many people go for this Anubis tattoo for its intricacy and detail.

In this Anubis tattoo which has an especially baroque composition, Anubis, lord of the afterlife, is seen with several other well-known Egyptian motifs like the pyramids, the Pharaoh, the eye of Anubis, the scarab (an Egyptian amulet in the form of a beetle), and the crook and flail.

Together, they paint a wholesome picture of Egyptian legends which is a representation of everything Anubis stands for!

A tip: Placement can be of great significance for this Anubis tattoo.

The ‘He Who Is In The Place Of Embalming’ Anubis Tattoo

In Egyptian mythology, Anubis went by several epithets, one of which was “He Who is in the Place of Embalming” – to venerate him as the deity of embalming and mummification. In keeping with this thought, this tattoo is a collage of the various aspects of Egyptian culture. The age-old ritual of mummification is represented with the sarcophagus and substantiated with various motifs like the serpent, representing the Goddess Kebechet. The tattoo serves as a cool homage to the fact that Anubis was often credited with the invention of mummification.

Another exceptional variation of this Anubis tattoo design is a mixed representation of Anubis and Kebechet, in a half-serpentine, half-canine form. How cool a design is that!

The Mighty Anubis and Horus Tattoo For The Good Ol’ Good Vs. Evil Message

This Anubis tattoo design idea comes with an interesting story.

In Egyptian mythology, Horus, the God of the Sky, is the half-brother of Anubis and is depicted as having the head of a falcon. He is the defender of order.

Legend has it that Anubis and Horus led a victorious battle against his own father Set, the God of chaos and trickery, when the latter tried to disrupt the graves.

The Anubis and Horus tattoo has come to take on powerful meanings of the eternal victory of good over evil and of strength and courage.

The Insightful “Eye of Anubis” Tattoo

One of the most common symbols in most depictions of Anubis and Anubis tattoo, the eye of Anubis provides for a compelling tattoo design even by itself.

Originally, the eye of Horus and depicted as a falcon’s eye with a tear underneath, this is a symbol of royalty, health, and protection. This symbol was thought to offer a safe passage to the afterlife. Hence, the connection to Anubis.

There are several modern takes on the eye with some sketches using a human eye instead of the traditional one.

The Magnanimous Anubis – Great Sphinx Tattoo For The Typical Tourist

Even if one doesn’t have thesis-much knowledge on Egypt, it doesn’t take a genius to identify the magnanimous Great Sphinx of Giza.

One of the seven wonders of the ancient world, the Great Sphinx is a form of the all-powerful sun god. It is the incarnation of royal might and the protector of the temple doors. It is also one of the biggest tourist attractions in the world!

This combination Anubis tattoo is for those who are not heavy on the symbols and backstories but simply want a jaw-dropping ink of two mighty emblems of the Land of the Pharaohs on their body.

The Anubis and Skull Tattoo For The Badass In You

The fighters. The rogues. The rebels. The renegades. In one word ‘the Badass’. This Anubis tattoo is for you.

The Skull in itself is of huge popularity among tattoo owners but combined with the Anubis tattoo it’s a whole other level of amazing.

Although rooted in Anubis’ identity as the God of the underworld, this design is not big on the matter of symbolism, myths, and legends. But if you want to get a tattoo purely for the looks and style, then look no further than this!

So, there you go! An Anubis Tattoo for all kinds of Egyptian mythology and Egypt-inspired tattoo owners out there.

Body art usually holds sentimental value to the people who wear it. Amongst tattoo enthusiasts, the Anubis tattoo has come to take a number of meanings like regeneration, spiritual protection, and good fortune.

For many people, Anubis tattoos are not merely a fashion statement. It is a symbolic celebration of life and death, and the eventual onset of the afterlife. For others, it could be a design that represents the search for one’s soul. Whether you are someone who just loves Egyptian tattoos or is obsessed with these symbols of the dead, underworld and graves, there is always an Anubis tattoo that is bound to suit your taste. Some other Anubis tattoos that you can go for are: