10 Best Greek Statue Tattoo Ideas That Will Blow Your Mind! 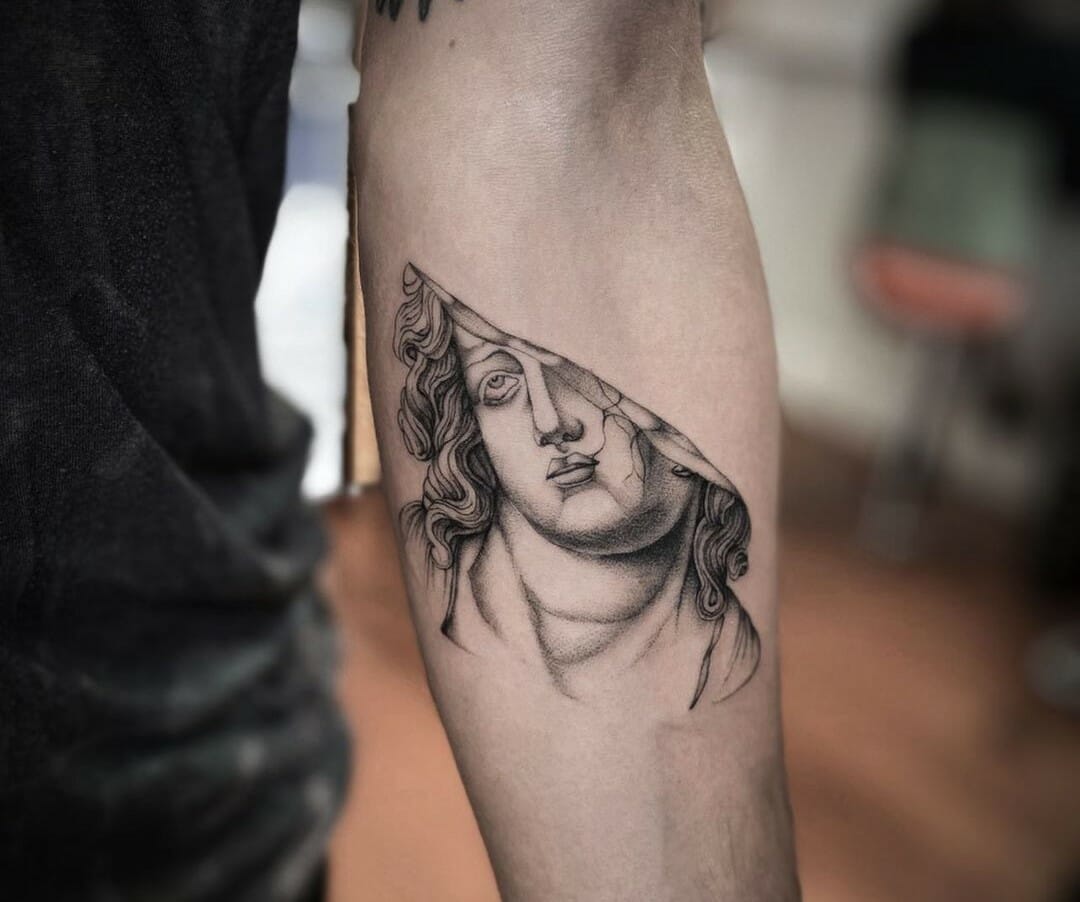 Do you love to explore ancient Greek mythology and culture? Check out these amazing greek statue tattoos that will blow your mind!

Ancient Greece was united only once in history by Alexander The Great in the 9th to 12th century BC.

Ancient Greece inspires western civilization still now. Greeks were considered to be the pioneers of sculptures and Greek art.

Greece always had a very rich history to share with the world and Greek Culture and tradition are still admired till date. Greek art forms are one of the world’s ancient art. and mainly, the sculptures of Greece are among the finest source of living art. Most of the sculptures were carved in marble or bronze by the sculptor and some even took years to reach perfection. They had different types of sculptures, starting from the classical to greek gods and goddesses and getting one of these beauties on your body will add charm to your personality as well. So, if you’re someone with good taste in aesthetics then you should definitely check out these breathtaking ancient Greece sculpture tattoos handpicked for you.

This stone statue tattoo has its spark to it. The artist collaborated planets with the Greek stone statue. The shading of this tattoo is just exquisite and gives it a 3D outlook. The tattoo artist also incorporated the ring of Saturn patiently. The bottom of the tattoo also has cracks to it, to make it a more vintage statue. The upper part of the tattoo is broken through which the planets are coming out. If you notice closely, the broken part has a different kind of shading added to it, to make it look like a 3D statue. This handcrafted tattoo has both a modern and vintage touch to it. You can definitely try this out to be in touch with history as well as the present.

This tattoo design is a classic work of aesthetics and the perfect venture into the details of gold colour. This tattoo looks rich with all the details in the statue. The tattoo artist also incorporated different shapes and lines to the outline of the tattoo to highlight the statue in the middle. The circle grading the background brings out the statue and the armour is further highlighted by gold colour. The two branches of leaves also give out a clean look to the tattoo. If you want a tattoo that looks rich in history, literally, then this is the one for you.

Medusa is one of the famous mythological figures of ancient Greek. This tattoo of the Medusa statue speaks volumes. The tattoo artist created magic in this tattoo with the black ink shading that looks like realistic shadows on the statue. The venomous snakes on her head are also tattooed beautifully with perfect shading and grading. This monochrome tattoo has an aesthetic outlook to it. If you love minimalism then this tattoo would definitely suit your choice.

The mix up of flowers and leaves with this tattoo is the prettiest thing you can lay your eyes on. The tattoo artist also used white ink to highlight some portions. This tattoo is also an ideal depiction of how broken things can be beautiful too. You can notice how flowers are growing from the broken part of the tattoo. The shading and cracks in the tattoo make the statue looks ancient and completely did justice to the theme. The concept of this tattoo is too beautiful and the shading on the petals adds charm to it. If you want something broken yet beautiful then this tattoo is your go-to tattoo.

The alignment of greek tattoo design is mindblowing. The artist beautifully placed the two statues with geometrical lines and shapes that really brings out the best of this tattoo. The artist used fine lines in the detailing of the hairs of the statues. The shading and colour grading are also too perfect on this tattoo. The tattoo artist added shading to create shadows in the second statue. The facial structures of both the statues have the finest detailings added to them. The tattoo begins with a sun on the top and ends with a moon added to it, this concept further brings out the charm of this tattoo and gives a different meaning altogether to this tattoo. If you want a complete tattoo and a tattoo with a purpose then this tattoo should definitely be on your list.

The tattoo artist beautifully drew this tattoo on the skin with perfect fine lines on the wings of the angel. The shading of this tattoo makes it look as realistic as a real-life statue. This tattoo has a vintage touch to it and the colour grading also makes it look rustic. The folding of the dress is also articulated perfectly in this tattoo. This tattoo is artistic and enchanting at the same time and the angel statue is something you can get if you want an ancient Greek tattoo that would look very sophisticated on you.

Hercules is a famous Greek warrior and is considered to be one of the powerful demi gods of Greece. This portrait tattoo shows the perfect emotions of Hercules and what he is known for. In this tattoo the artist collaborated the Lion and Hercules together, both depicting fearlessness. The detailing of this tattoo is exquisite. The shading of this tattoo made the statue and lion looks very realistic. The muscles on the face of Hercules and the high detailing of the lion is worth appreciating. This masterpiece tattoo is done very patiently and the result speaks it all. So, if you want a fierce tattoo that would go with your personality, then this should definitely be on your wishlist.

Athena is among the famous Olympian gods of wisdom and war. This Goddess Athena tattoo has beautiful details to it. The statue of Athena is placed inside a round frame, and the frame has rich detailing added to it. In this tattoo, Athena is wearing headgear and has a weapon in her hand. Even in this miniature tattoo of the sculpture, the expression of her face is still portrayed flawlessly. The folds in the clothes that she is wearing also have intricate designs to it as well. The tattoo artist also used fine shading and colour grading to give this tattoo a realistic outlook. If you want a feminist based historical idol tattoo, then this gorgeous Athena tattoo would definitely be a charm on your skin.

Mythological Greek god tattoos are among the most popular searched tattoos in pop culture. Poseidon was among the famous and powerful Greek Gods. Poseidon illustration tattoos are popular and this tattoo gives justice to the ancient god. Greek gods tattoo designs would look mystical on your skin. This tattoo has a spooky look attached to it. The bottom of the tattoo has a fishtail and the detailings of the fish scales with the help of fine lines and shading makes the tattoo more enchanting. The expression in this tattoo on the face of Poseidon has a powerful element. In this tattoo, Poseidon is also holding the famous trident in his hand. If you want a Greek god tattoo, then you can definitely check this tattoo out.

Greek mythology, culture, tradition and sculptures are bound to mesmerize people looking at the perfect pieces of masterpieces. The arts leaves one in awe about the perfection attached to it, and one hardly finds a flaw. Be it tattoos about Greek mythology, art or statues, all of them have really interesting elements attached to them and getting such a masterpiece tattooed on your skin would add its own charm and aestheticism. Rich in history and art, Greece has a lot more to offer to the world, and if you still want to explore more about tattoos about greek statues, then check out the list below.