101 Best Angel With Gun Tattoo Ideas That Will Blow Your Mind! 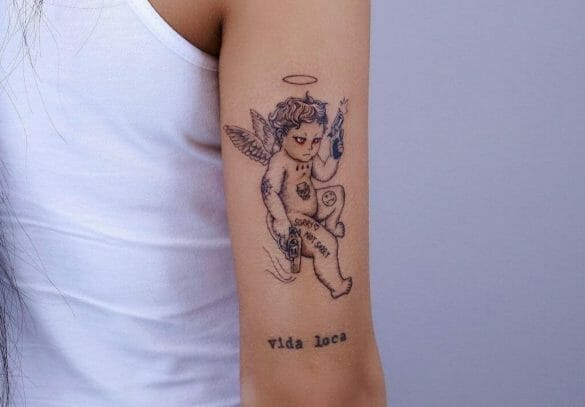 Are you looking for some of the most fantastic angel with gun tattoo ideas? Keep reading the article to find the best angel and gun tattoos.

Angel with gun tattoos are unique and have recently gained popularity.

Angels holding gun tattoos look very edgy and classic. The elements of gun and angel bring two opposite beliefs together in a tattoo design.

Angels are considered the messenger of God. They are known to protect us from the different problems in life. However, guns, on the other hand, symbolize rebels and power. An angel with a gun tattoo symbolizes rebelliousness, passion, power, and personal protection. These tattoos are gorgeous not only for their design but also for the meaning hidden behind them. If you are in search of some of the most incredible angels with gun tattoos, we’ve got you covered. We have created a list of some of the most fantastic angel with gun tattoos for you to select from for your upcoming tattoo session.

Boys and girls, this tattoo looks breathtaking due to its intricacy. The detailing has been done so finely that the tattoo almost looks 3D. Every fold on the cloth, every feather, and every part of the skin has proper shading. The use of light and dark shades has created the illusion of depth in the tattoo. The angel is seen holding a revolver. This tattoo stands as a symbol of freedom and self-protection. The beauty of this tattoo art will catch the attention of every person. You can get this tattoo on any part of your body.

Angels are known to be the messenger of the gods. They symbolize strength, freedom, love, and good luck. Gorgeous angel tattoos are trendy, and you can quickly come across one while scrolling through Instagram or the free Pinterest app. It would never hurt to have an angel by your side when you have to live under fear or constant darkness. So if you are looking for angel gun tattoo ideas, this feisty, adorable angel tattoo might be perfect.

The artist thoughtfully designs the angel in this tattoo as the baby angel’s body is detailed with many micro mini tattoos. The guns and the cap add a super cool and badass look to this cute little angel. Since this tattoo is small, you can get this in any part of your body, but it will look best on your chest, back, arm, and finger.

Baby angel tattoos are usually seen with a smile on their face. However, that does not match with the entire theme of an angel with a gun. But this baby angel tattoo does justice to the theme. The expression on the face of the angel is seen to be anger or annoyance. The tattoo has a baby angel flying, holding two guns in his hand.

The cupid also has some tattoos on his skin that matches the theme of rebelliousness. One tattoo reads, ‘sorry, not sorry, and there is also a smiley with a sad face and a skull tattoo. The tattoo has been made using black color, but some streaks of white ink make the tattoo look edgy. This one is perfect if you want to get an angel with a gun tattoo. It matches the theme and is an out-of-the-box design.

Outlined Angel With A Gun Tattoo

There are a variety of angel tattoo designs with different elements added to serve another purpose. Angel tattoos carry a deep symbolic significance for the person who wears them. They are worn for various reasons and serve different purposes. Some get it inked for religion, good luck, fashion, strength, or to symbolize specific things. We can find many detailed and delicate tattoo designs, but sometimes simple outline tattoos are the key.

This tattoo design of an adorable little angel holding a revolver in his hand, aiming for its target. This tattoo is super cool and adorable at the same time. The detailed outlines of this tattoo are done very precisely by the tattoo artist. You can customize this tattoo to your liking by adding colorful ink to match your skin tone instead of black ink or some pop of color to add definition to the art. This tattoo will be great for your first tattoo, or you can add it to your sleeve.

People often believe that an angel-holding gun tattoo must be scary or gangster-like. However, this tattoo design is different from any other. The tattoo has been created using black ink. The cupid is seen holding two guns in two hands. The tattoo looks hyper-realistic due to the precise, intricate detailing in the tattoo. The tattoo uses detailed dot work and shading to make the tattoo look realistic.

The artist has used dot art in such a way that they create a look of light and dark. The shading looks perfect and even creates folds and bumps on the skin. Each element of the tattoo – the cloth, the guns, and the body has proper shading, making the tattoo look marvelous. You can get this tattoo done on any part of your body.

The angel with gun tattoos is a symbol of power and rebelliousness. This tattoo does justice to this theme. The tattoo has a cute angel holding a gun in her hands. The tattoo is an outline tattoo that still has some minor elements, which makes the outline tattoo look magnificent. The tattoo has great shading work, which creates the illusion of shadow. The wings and the gun both have some great detail working.

The eyes of the cherub have a sparkle to them which is the main attraction of the tattoo. The eyes make the tattoo look even more realistic. The tattoo also has the writing ‘My Dear Melancholy’ inscribed in crooked lettering. The meaning behind this tattoo is that the person getting it done is saying to melancholy or sadness that they don’t care. The comma at the end of the phase is a continuation of the angel tattoo.

If you want an actual gangster tattoo idea, this tattoo is the one for you. This cherub is holding an AK47 and wearing a full-face mask. The tattoo doesn’t have much detailing, but its simplicity makes it look even cuter. The tattoo’s wings have some shading work, which adds depth to the tattoo.

The angel’s mask is seen wearing has detailed line work, creating a beautiful pattern. The gun also has some excellent detail work, making it look almost realistic. This tattoo is a true sign of being a rebel and power. You can also add some elements that you want to the tattoo. This small cherub tattoo will look great with any outfit that you choose to put on.

Angels have various meanings; they represent protection, freedom, and faith. They are found in many different forms. But this adorable tattoo of a cowboy angel is going to be an eye-catcher. This is an out-of-the-box idea, as we don’t get to see a cowboy with wings.

So if you are searching for an adorable tattoo design with deep, meaningful significance, this tattoo of a cowboy angel with a gun is for you. The angel art is detailed and shadowed with black ink to put definition and realistic effects to it. Girls and boys usually get this tattoo on their arms, hands, back, or chest.

The baby gangster angel is seen holding a gun and flying. The artist has done an amazing job in creating a realistic look. The tattoo has been created using black ink, which makes the tattoo look very classy. The edges of the tattoo have some fantastic dot art, creating the illusion of shadows.

The cherub looks cute and holds the gun, and the tattoo represents rebelliousness. This tattoo will look great on your skin and compliment any outfit that you choose to put on. You can get to get this tattoo on any part of your body. Make sure you are getting this tattoo done by a professional tattoo artist to achieve the tattoo’s proper detailing and realistic look.

Are you getting an angel-holding gun tattoo? How about two angels with a gun? This tattoo idea is perfect for that. Two gangster angels are seen holding guns. One angel has a mask on the tattoo, while the other angel has no mask.

The detailing on the tattoo looks breathtaking. The tattoo has some beautiful dot work which creates the illusion of shadows in the tattoo. The shadowing makes the tattoo make hyper-realistic. You must get this tattoo on your back or chest, so the artist has a bigger area to create the tattoo.

An angel with a gun tattoo is the perfect symbol of power, protection, and being a rebel. If you are searching for a tattoo representing these ideas, an angel-holding gun tattoo is ideal for you. These tattoos have some exquisite detailing which makes the tattoo look hyper-realistic. Such tattoos are so cool and edgy that we are adding a few more to the list for you to choose from.

What is the meaning of an angel with a gun tattoo?

An angel with a gun tattoo typically signifies protection, strength, and courage. It could reflect a desire to protect oneself or someone else from harm, or the determination to overcome a difficult situation. The angel is often seen as a protector of those in need, so it could be used as a reminder to stay strong and fight through hard times.

How did the angel with a gun tattoo become popular?

The angel with a gun tattoo first became popular in the early 2000s, when tattoos had become more mainstream. The intricate details and symbolism of this tattoo made it appealing to many people looking for meaningful body art. The design has since grown immensely in popularity, as people continue to be drawn to its combination of spiritual and protective elements. Today, it is still one of the most requested tattoo designs.

Who typically gets an angel with a gun tattoo?

The angel with a gun tattoo is typically popular among those who are looking for protection or strength. It can be a sign of defiance against life’s obstacles and difficult situations, as well as a reminder to stay strong and brave in the face of adversity. It is also often chosen by people who want to honor someone special, or those who have overcome difficult times in their life. No matter the reason, this tattoo can be a powerful symbol for many people.