10 Best Angel Neck Tattoo Ideas That Will Blow Your Mind! 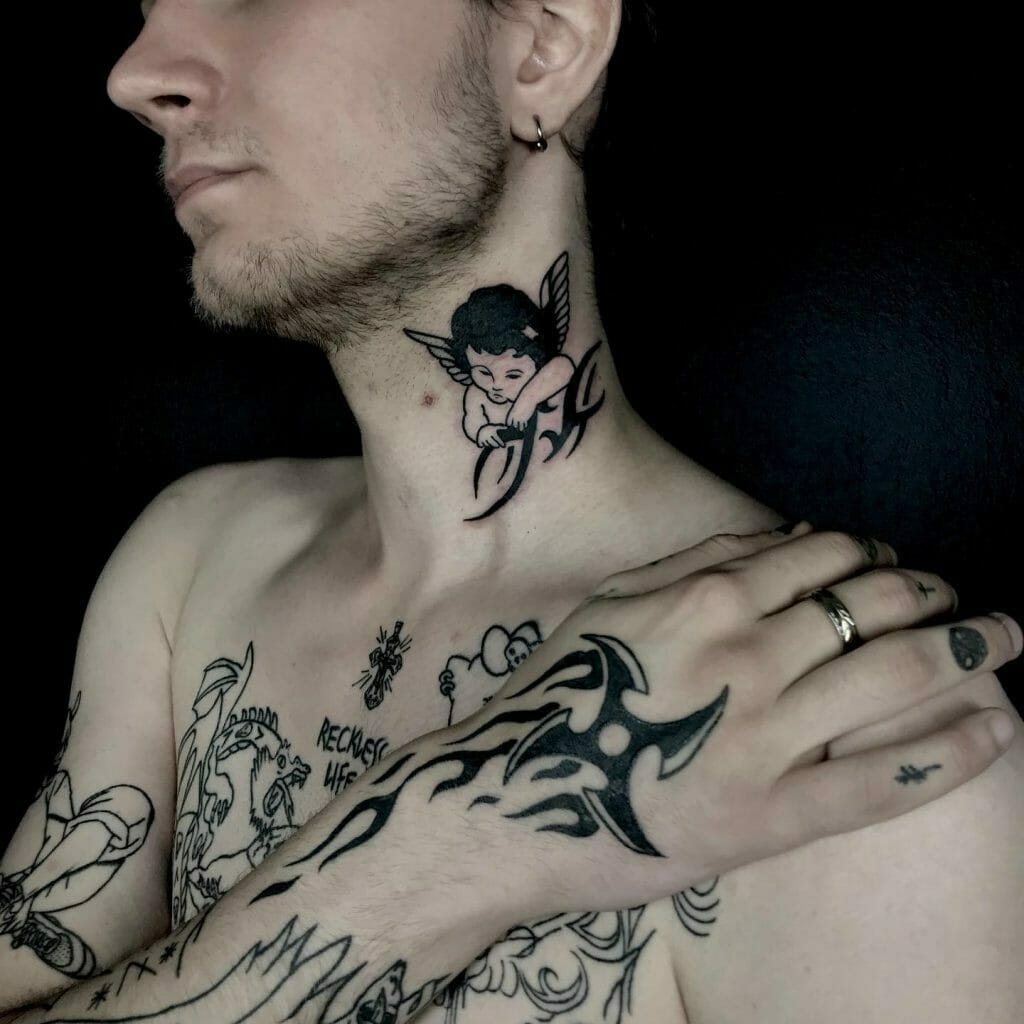 Have you ever wanted to get an angel neck tattoo? Check out these 10 amazing tattoo ideas for your neck that you can get inked.

Everyone fancies aesthetic and meaningful tattoos on their body, especially on the parts where it is most exposed.

Getting a tattoo is not a new idea. It has always been there since the Neolithic Ages. It was a common practice for tribes to ink their peoples’ bodies with designs and patterns to acknowledge their cultures, values, and ethics.

The need to bind each other through common symbols developed a sense of unity between families and societies that eventually established the practice of getting tattoos for religion and tradition also. Religion played a big role in the history of tattoos. Religious symbols were engraved onto a human body to reflect devotion toward a deity. Of all these symbols, the angel was quite celebrated as a tattoo design. The meanings of the symbol of an angel vary from religion to religion, race to race, and culture to culture. But it always bears a connotation of purity, faith, and strength of the good.

The angel tattoo throughout history has symbolized a source of peace, hope, and spiritual guidance. Even though presently it is not a strict rule to have religious symbols plastered on your body, people tend to look for angel tattoos quite often. These angel neck tattoo ideas below will blow your mind as you will get enlightened on their meanings and history as well.

This guardian angel tattoo is positioned perfectly across the side of the neck. The neck tattoo in black ink shows the guardian angel Michael floating and holding his scale of justice and a feather. The detailed shadows on the figure give it a three-dimensional effect. The spreading wings on both sides look gorgeous on the man’s neck.

Michael’s tattoo is one of the most celebrated religious tattoos. According to the Christian faith, Michael is the most worshipped of all the guardian angels. He is the benevolent protector of truth and justice. He is said to have defeated the dragon or the Devil with God’s army. So this tattoo will be suitable for those men and women who look for the right guidance in life.

This is a tattoo of a biblical cherub, a small celestial being with wings and a halo. This tattoo bears a different meaning than the other symbols. The symbol of a cherub is drawn to pay tribute to a deceased child or to protect a child from brutal mortality. This is the saddest angel tattoo on the neck that you can get.

This is a baby angel neck tattoo along with a tribal symbol. The tattoo is posited on the side of the neck. The cute baby angel is looking gloomy, and the wings are gently drawn.

Even though Icarus is just a winged humanoid, his figure is great for angel tattoo designs. The falling figure of Icarus tattooed in black ink on the front neck shows the helplessness and vulnerability of this Greek mythological character. One of the wings melting and falling apart really reflects the legend of Icarus.

This front neck tattoo is inspired by the legend of Fall of Icarus. Icarus was too reckless to take the risk of flying so close to the scorching sun even though he was warned by his father, Daedelus, that his wax wings could melt. And indeed, they melted, and he fell and drowned in the Icarian sea. His symbol represents the patience and control one should have over their ambitions. One shall never be too ambitious to end up like Icarus.

Death or Grim Reaper has always been portrayed as a frightening skeletal angel who approaches dying souls and guides them to the afterworld. He always broods in darkness and wears a hooded cloak. Here in this full-neck tattoo, the artist has skilfully inked the shadowy figure of the Grim Reaper and his wings. He seems to be praying, which is an unusually subtle design.

Grim Reaper has often terrorized humans with his bleak and scary appearance. His origin lies in 14th century Europe when the Black Death stroke its lash all across the continent. So this is one of the most demanded neck tattoos for men and women who worship the Grim Reaper as they know his power. This is one of the best neck tattoos that symbolizes the inevitability of mortality and the need to enjoy life at all costs.

The figure of Cupid is a preferable tattoo design if you are looking for small neck tattoos. Even though neck tattoos hurt, getting them is fun. This Cupid tattoo on the side of the neck has detailed and intricate designs to attract the onlookers easily. The shy and chubby Cupid holding his arrow while floating in the air is etched perfectly on the skin with black ink.

The Roman mythological God of Love, Cupid, has been portrayed as a chubby and mischievous baby boy since the Renaissance times. Amongst the most famous baby angels, Cupid is considered to be in vogue. His tattoos embody the power and fickleness of love between two souls.

A classy neck tattoo of a praying guardian angel is something to be gawked at. This tattoo of a female angel joining her palms in a praying manner is tattoed in a hyper-realistic art style. This effect promotes the neck tattoo to look like a statue.

A guardian angel is a celestial deity who guides and protects you in all spheres of life. Human nature is prone to seeking comfort in a higher being for protection and guidance against sorrows and struggles. So if you are hunting for such a symbolic tattoo, this one will be perfect for you.

The most popular tattoos are the typical angel wing tattoos. But here, it is a little different, this tattoo has not only two gorgeous wings but also a crown on top of them, inked on the back portion of the neck.

Native American cultures advocate strong beliefs in spirits and angels. These beliefs started getting reflected in their tattoos too. So it was very common for native Americans to get angel wings tattooed on their body parts, including the neck. Angel wings tattoo generally symbolizes freedom and elevation. But as the crown is also associated here, it could also mean the freedom to elevate your ambition to a higher level. Angel wings tattoos are mostly men’s tattoos but are still one of the best neck tattoos ever.

Tattoo artists usually get requests from their customers to make them some funny tattoos. But have you ever come across such a blatantly funny angel tattoo? Angel tattoos are supposed to be seriously religious, but here in this neck tattoo, a robber angel is holding a heavy sack full of dollars. It is weird, yet the masked face of the angel and his exposed buttocks will never stop amusing the beholders.

The tattoo artist has put as much detail as he could into this absurd neck tattoo. One can only assume the reason and meaning behind such a grotesque image. One can only imagine this angelic figure to be Cupid but probably in a parallel universe where instead of shooting people with love arrows, he is only looting banks for fun. As mischievous as this angel looks, this neck tattoo amazes everyone.

Here is the most spectacular back neck tattoo design on this list. It is so skilfully planned and inked, covering the back of the head and neck, making this angel tattoo look marvelous. The floating body of the extraterrestrial figure with his huge wings spread out, and the thunder all around makes the angel tattoo looks stronger and bolder.

One could only interpret this celestial being as Râmîêl from the Hebrew culture. He is a fallen guardian angel who is assigned the task of leading the pure souls to heaven and providing divine visions to man. His name translates to “thunder of God”, relating him to this full neck tattoo. This could be one of the most beautiful neck tattoos for men and women alike and apart from the neck, this angel tattoo will look cool on any body part.

It might be a shock to see an angel holding a skull tattoo design on somebody’s neck, but this tattoo is indeed a curiosity-inflicting neck tattoo. This angel tattoo portrays a beautiful angel and a human skull on his hand as he is pressing his lips with his finger. Anyone looking at this marvelous piece of body art will question its symbol and purpose.

Neck tattoos symbolize the wish to communicate more with others and be more open. So getting a neck tattoo is a good start to enhancing your confidence and communicative skills. And when you are making angel tattoos on the neck, it is a wish to communicate more spiritually with others, to let them see who you actually are from inside. It is good to have angel tattoos on your body when you are a religious or spiritual person seeking guidance and hope in life. This awesome collection of the best angel tattoos on the neck will provide you with a clear idea.