Everything You Need to Know about Male Hair Loss 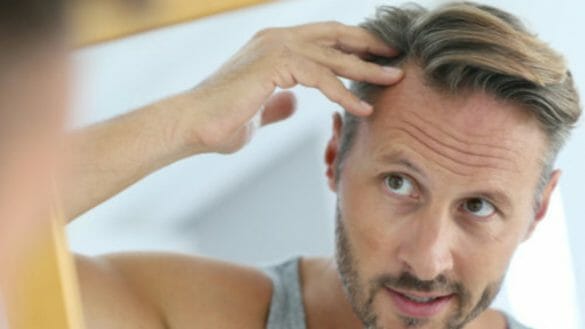 Male Pattern Baldness is something that affects a whole range of men, whether you’re a healthy, active twenty-five year old or a middle-aged man who lives off KFC. In this guide, we’ll go over what to do about hair loss in men, how to slow balding, and other types of hair loss, such as alopecia.

What Causes Baldness in Males?

Hair loss in men is a common enough tale, and it’s more likely you’ll see a middle-aged man with a thinning crown of hair than a full one, but why do men lose their hair? The cause of hair loss is to do with genetics, so is something you can really only blame on your ancestors.

If you’re wondering where does the baldness gene come from specifically, you can get it from either side of your family. So even if your parents are working with a full head of hair, if you had a great, great uncle who suffered from bald patches on his head, it’s entirely likely that you could have the same problem. Just something to keep you up at night. Balding genetics are extremely complex and it’s therefore hard to comprehensively track down how baldness is inherited.

Male Pattern Baldness is caused by a by-product of testosterone called Dihydrotestosterone or DHT. DHT clings to your hair follicles and makes them shrink over time. Hair loss progression can vary from men to men, with some will dealing with rapid hair loss, with their hair thinning in a matter of years, and others dealing with more gradual hair loss, that can take up to 15-20 years. So, if you spot a sudden bald spot, it doesn’t necessarily mean you’ll be bald within the week, and you might just have to deal with a thinning hairline, which can be easy to work with, with the right hairstyle pattern.

How to Know if You’re Going Bald

If you’ve had any passive aggressive friends asking you “is it normal to see your scalp through your hair?” then there’s a good chance your hair might be thinning out. However, if your friends tend to hold back on the hair comments then there are other ways you can track any hair loss. Of course, this also depends on how old you are. If you’re in your 20s and you think you could be suffering from premature hair loss, there are some signals to look out for.

The first thing you need to ask yourself is ‘is my hair getting thin?’ and keep a track of any massive hair loss. Are you noticing more hair fall out on your pillow? When you shower, do you feel like more hair is going down the drain?

Male Pattern Baldness only affects the top of the scalp, so you shouldn’t notice any hair loss on the sides of your head. If you think you might be losing hair, keep track of your normal male hairline and see if you notice any changes. There are generally three different types of patterns, so look out for these variations.

A receding hairline will give you a sort of horseshoe style look, sometimes called a widow’s peak, and is one of the most common patterns of hair loss. It can either just thin out a little, creating a contrast in lengths, recede further back until it reaches the crown, or turn into temple hair loss at the front of your head. Hairstyles for men with receding hairlines tend to be fairly simple, with celebrities like Jude Law keeping their hair trim so as not to draw too much attention to the thinning patches.

Hair thinning at the crown, or vertex baldness, can lead to a kind of monk look, where you have to deal with a bald spot on top of your head. This can spread out until it reaches a receding hairline, growing into a large bald patch on the top of your head, and it can be hard to fix bald spots in hair. There aren’t too many hairstyles for bald spots, and although hair loss on your crown can affect your confidence, it’s better to accept the appearance rather than try out different comb-overs.

This is the least common pattern of men’s hair loss and results in sometimes sudden hair thinning all over the top of the head. Essentially it’s like the previous two patterns combined, spreading out and leading to hair loss at the back of head.

While there are ways to slow down hair loss, there’s currently no set cure for male pattern baldness. So, what to do if your hair is thinning? There are certain hair loss remedies for men that can block the hormones causing hair loss, and although these might not work for everyone, they’re a good place to start. Although it can take time to regrow hair on your crown and the rest of your head, with some drugs it’s worth the wait. Finasteride is a drug that can help to block and prevent the formation of DHT, while Minoxidil helps increase the nutrients provided to the hair follicles, preventing shrinkage, and in some cases causing men’s hair regrowth.

Although vitamins can’t stop you going bald or cause hair growth, it is necessary to be in good health and provide the body with the right minerals. This ensures you get the best chance of male hair re-growth, with the vitamins helping to provide healthy blood to the hair follicles and increasing the chance of male hair restoration. Considering that malnutrition can lead to hair loss, specifically telogen effluvium and diffuse hair loss, it’s crucial your body receives a good dose of nutrients which will also contribute to your hair’s health. Of course, malnourished hair is much easier to deal with than actual hair loss.

One thing that’s not going to make a lot of difference to hair growth are men’s hair loss products for. Hair products aimed at thinning hair and hair loss tend to be overpriced and ineffective, and although they might be good for your scalp, they can’t get in and prevent the hormones that cause hair loss. Natural hair loss remedies for men tend to also be fairly ineffective, with most simply moisturising your remaining hair rather than ‘fix’ your balding. However, some people claim that certain natural products such as nettle root can help with hair loss, so in the end it’s all about personal preference and experience.

Alopecia is a condition that causes medium to severe hair loss, resulting in bald spots, total loss of hair on the head and, in extreme conditions, loss of hair from the whole body. Hair loss in alopecia varies, and there are different types of it such as Alopecia Areata, Alopecia Totalis and Alopecia Universalis.

How Do You Get Alopecia?

Alopecia is caused by the immune system, that usually fights off diseases and viruses, mistakenly attacking hair follicles. Is alopecia genetic? Scientists still don’t know the full reason why some people get alopecia and others don’t, and so it’s fairly difficult to predict whether a person will suffer from it. For that reason, we can’t fully speak of hereditary hair loss or a hair loss gene in this case. Many men who have the condition can go from having long hair that’s thinning to dealing with bald patches.

There’s no set cure for alopecia, although certain drugs like Tofacitinib and Ruxolitinib have shown promise in re-growing hair. These drugs still need more testing to prove that they’re no negative side effects to them but have helped some sufferers fully grow back their hair. Some hair loss doesn’t always lead to re-growth, but in the years to come there may be a fail-safe drug that can solve the problem.

Male Pattern Baldness and even alopecia are conditions that affect millions of men around the world and are a lot more common than you might think. If you’re suffering from either one there are things you can learn about each one to help control or even improve them. Drugs are steadily improving, helping people with no hairline reclaim theirs. In a few years we might have the cure for male and female pattern baldness, but for now, it’s all about working with what you have, even if that’s a balding crown or a strong receding hairline.