101 Best Undertale Tattoo Ideas You Have To See To Believe! 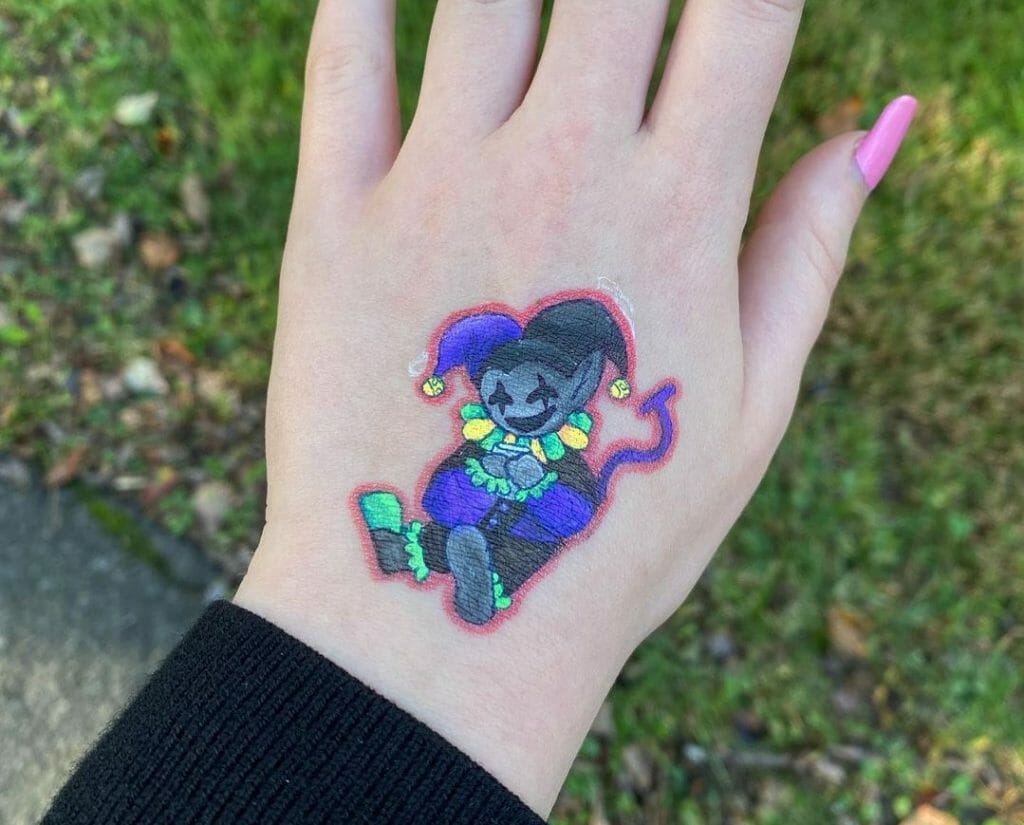 Looking for ways to ink your love for Undertale? Fret not! We have a plethora of designs for you to get tattooed with the cutest game ever!

Undertale represents all things cute and wholesome with their sign and services telling you it’s not necessary to kill to win.

Undertale tattoos have gained popularity after the videogame was released back in 2015 and the designs seem to improve with ample experimentation and references from the game. It is truly amusing how 2D videos have created havoc in the tattoo industry ever since the pixelated Kirby or Pokemon tattoos, but with Undertale, the content has reached sky-high limits.

A 2D role-playing videogame in a 4K age is quite an unusual phenomenon but Toby Fox knew what he was doing. Most games deliver a rather violent approach in the course of activity that they offer. Amidst such a generic pattern, Fox introduced quite a revolutionary measure that states destruction is optional. Undertale thus has had a history of demand among kids and adults. If you are also trapped in the underworld reaching for the end destination of finding a suitable design, keep scrolling for more information and quirky Undertale tattoos!

The very first thing that we notice while playing Undertale is the controls given for our activity. Being a role-playing game, the protagonist has control over their choices, and thus you can choose to either save, fight, mercy, or act. The artist here crafts the tattoo based on such a quirky trope while keeping things simple. The controls are painted in bold black with their respective symbols to aptly highlight them on skin. Place this tattoo on your arm for the best exposure.

While opting for smaller and simpler tattoos, you can always sign yourself up for the Undertale logo that recurs throughout the journey. This idea gives you autonomy over the surface area that you are willing to put into the designs and at the same time makes a great Undertale reference for you to show off. Owing to its petite structure, you can place this design anywhere you wish on your body and it is bound to steal glances.

In Undertale, the concept of determination is a bit different than what we generally understand. Determination helps to improve the capability of souls to exist even after their death. Thus, based on how much determination you have, aka the will to live, your soul will stick around. Humans are believed to possess the highest degree of determination among other things in the game, hence having a bright red heart. Here, the artist displays the souls in their pixelated forms and assorts them in colour. The idea to include a brief portrait of the protagonist/Frisk helps to deliver a greater impact besides the information.

Keep your Stay Determined tattoo utterly simple using plain fonts while lettering. Although the phrase is an integral part of the game, it is often colloquially used. So, if you don’t want to seem ultra nerdy about your videogame craze, opt for this tattoo sans any other tropes. All in all, this phrase will push you with a dose of motivation and the will to improve on yourself, making the tattoo uber positive!

Paint Frisk in joyful and girly shades based on this design. Thanks to 2D, Frisk does not really appear as a lively human, thus providing ample room for creativity. The artist here tries to fill up the gap by portraying the protagonist charged with determination, both in and out of the gameplay. The red-headed Frisk comes alive with blushed cheeks and controls life with determination and love. You can deliver these adorable protagonists on your arm and make the videos come to life.

Despite Everything, It’s Still You Tattoo

The quote that has definitely struck a chord with anyone who has taken the Pacifist route and reached Asgore’s house, despite everything, it’s still you becomes one of the most tattooed references based on Undertale. It is a collective experience that we all share when Frisk looks into the mirror and a surreal light controls the ambiance followed by beautiful music, and that experience is of realization. On a deeper level, the quote makes us measure the journey that we have undergone as the protagonist of the game and of our lives and what we have become by the end of it. It is a heavily introspective remark that Fox tries to deliver among other things going on around. This tattoo is an exact representation of the videos floating around on the internet and attempts to express the true essence of the scene.

You can also exhibit your love for this quote with only the pop-up remark, as is shown by the tattoo here. There is no additional content except the red heart, avoiding any bulk on the design. This design will make an exceptional tribute to Undertale and etch the sign of your love on your forearm forever.

Napstablook, the perpetually depressed ghost of Undertale having low self-esteem is a good reminder of Eeyore from Pooh who we all have encountered as a child. Napstablook is however courteous and treats his visitors with respect enough to ask them to lie down with him and “feel like garbage.” The artist here takes Napstablook through space but he remains sad amidst all the cosmic things. Napstablook floating around in the cosmos would definitely deliver an eye-catching tattoo and at the same time showcase your love for Undertale. Although, you can do away with the space background and ink the ghost adorned with his headphones for a simpler tattoo design.

Flowey is one of the major characters that we meet soon after entering the underworld. He first appears as a friendly flower with yellow petals and attempts to gain the favour of the protagonist by deception. But soon enough we get to sense the danger with Flowey throwing pellets and unveiling his reality. The artist here inks this tattoo based on the many faces of Flowey that we see in the game. The lack of colour controls the ghastlier appearance of this Undertale tattoo and is fit to be shown off on your forearm. Or if you love your tattoos creepy and unsettling, add more information on Flowey’s philosophy alongside a pixelated version of him. A “kill or be killed” or like he says, “kiww or be kiwwed” would be enough to share these Undertale references.

This dreamy version of the sword is a need if you want to amp up your Undertale tattoo game. We measure the capability of a weapon based on the damage it can deliver on different things. But in Undertale, this sword charged with determination takes the cake! Inked in pastel shades and filled with coloured hearts, this design is appropriate if you love a dainty tattoo that expresses you in your true elements.

This tattoo features the Greater Dog- an incredibly affectionate guard dog armored in a metal case who handles a spear. The cute dog face peeking through a grey armor is a great way to escape mundane things for funnier ideas. Keep the design simple in black and grey and get it inked on your arms for a full show of your Undertale fancy.

Sans and Papyrus share a brotherly bond in Undertale and have an amazing song to themselves. No kidding! Sans cares about Papyrus and naturally, a dangerous activity is laid out after the protagonist kills Papyrus. This skully duo expresses love in the most unusual ways, and well, we love this game for these quirky things. The design here portrays a sleek image of the two brothers in black and grey. You can either exhibit this duo or go solo with a funky Sans tattoo.

Undertale tattoos have received their fair share of love and acceptance offering people a comfort zone in gaming. Undertale offers enough room for you to experiment with things and suit them according to your taste. To ease your journey a bit more, the following are some suggestions to help you get inked:

What is an undertale tattoo?

An undertale tattoo is a type of body art that is inspired by the popular role-playing video game, Undertale. The tattoos often feature characters and symbols from the game, such as Frisk, Sans, Papyrus, Toriel and Flowey. These designs can be done in various styles including traditional, neo-traditional and watercolor and they allow fans to express their love for the game in a unique way. Undertale tattoos can be done as either small simple designs, or larger more detailed pieces that span across the wearer’s body. The tattoos also often feature inspirational quotes from the game which make them even more meaningful to the wearer.

What are the different types of undertale tattoos?

Undertale tattoos can be done in various styles including traditional, neo-traditional and watercolor. Traditional style tattoos are typically bolder with more defined lines and use black ink to create the design. Neo-traditional tattoos have a more illustrative look to them, with softer lines and a wider range of colors than traditional designs. Watercolor tattoos have a more abstract look to them, with the design appearing as if it was painted onto the skin. Depending on their size and complexity, these tattoos can be used to create full body pieces or small designs that are meant to act as accents.

How much does an undertale tattoo cost?

The cost of an undertale tattoo will depend on the complexity and size of the design as well as where it is located on your body. Generally, small tattoos can range anywhere from $50 to $200 while larger and more detailed pieces can cost upwards of thousands of dollars. It is also important to note that some artists may charge a different rate depending on their experience and the amount of time they need to complete the design. To ensure you are getting a fair price, it is best to consult with several artists before making your decision.

How do I care for my undertale tattoo?

Caring for an undertale tattoo is similar to caring for any other tattoo. After your artist applies the design, it is important to keep the area clean and dry for at least two weeks. During this time, you should avoid exposing the tattoo to direct sunlight or swimming in chlorine-treated water as these can cause damage to the ink.