10 Best Doom Tattoo Ideas You’ll Have To See To Believe! 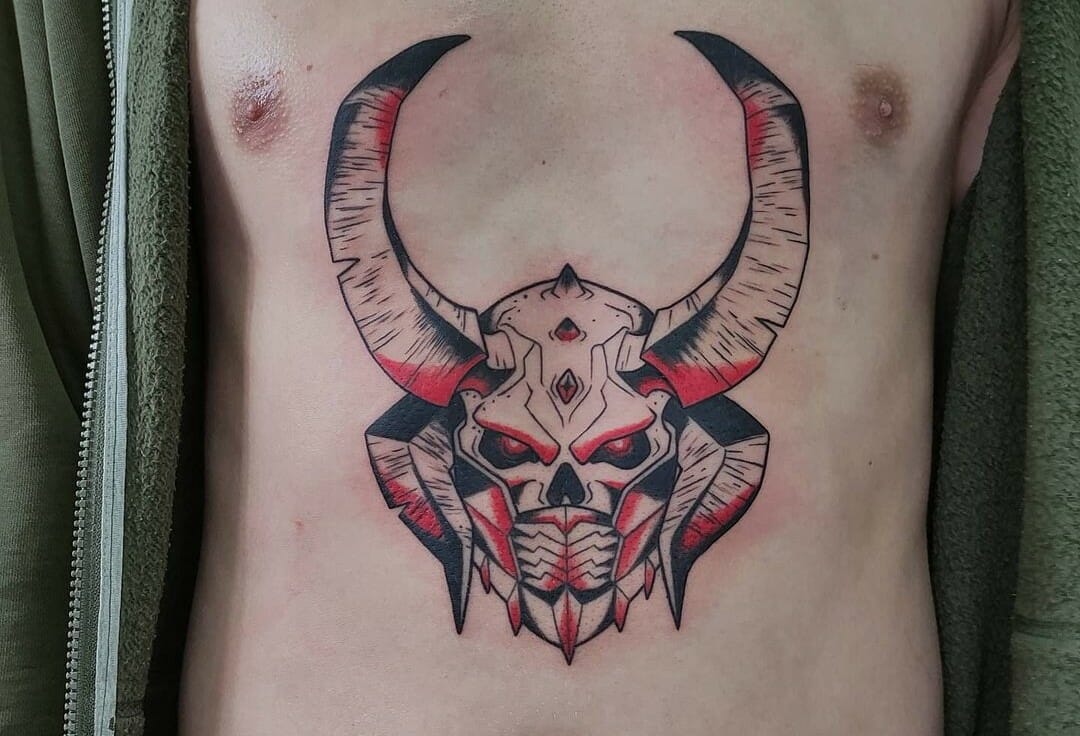 Looking for some cool tattoos of the Doom Slayer or the demons from Doom? We have collected the best tattoos out there from the hit game franchise for you!

Doom is probably one of the most popular game franchises that have ever existed, with characters and demonic enemies that even individuals who have not yet played the game can appreciate.

Doom is one of the few games that an enormous number of people belonging to different generations can easily recognise. As a matter of fact, Doom is quite hard to forget, especially with its extremely graphic projection of hell and the ultra-cool natives that reside there.

We definitely cannot forget or ignore the amazing artwork that went into making every devilish creature and their various antics. The exploits of Doomguy and the amazingly vivid instances of what hell has to offer are a level above almost everything developers can throw at you. These nightmarish creatures of hell also look impressive when imprinted on the canvas which is the human body. Doom fans definitely love these tattoos of favourite game scenes and extremely fascinating monsters. However, a Doom tattoo is also great for people who find that they are fascinated by devilish creatures, nightmare elements and the concept of hell. Relevant Doom tattoo ideas can also help represent one’s ideologies and beliefs. Here are some of the most extraordinary Doom Tattoo ideas that we have collected to show you how great they look. These tattoos are also a great match for fans who love the game as well as metal music (black, death, thrash etc.), thus it might inspire you to create your own design based on one of Doom’s notorious villains or bosses.

These tattoos are definitely going to impress you, especially, if you like large powerful demons with diabolic horns. You might not wish to be a demon, but commanding a diabolically strong personality with the help of a Doom Tattoo similar to the tattoos above, definitely does sound rewarding. These kinds of tattoos would make Doom fans would go crazy and these can be always be appreciated for the insane artwork. Meanwhile, unwanted onlookers would simply stay away and never bother you.

The Cacodemon is and literally represents an evil spirit for ancient Greeks. However, for Doom fans, these notorious monstrosities are much more than that. These demons can be found throughout the various instalments of Doom in their many hellish locations. They float and they have enormous mouths that can cause massive damage ( and definitely eat a normal human) if you get within close proximity of these ugly red beasts. As a matter of fact, they are so ugly, that they are extremely cool to show off. They can be also made to look extremely scary and aggressive if that is your thing.

Mark of the Doom Slayer Tattoo

Every tattoo enthusiast has to accept that the mark of the Doom Slayer is one of the coolest symbols they have ever seen. These are very popular tattoo ideas that are also mistakenly referred to as the hand of doom tattoo (on hand only). However, when talking about the hand of Doom tattoo, it actually does not refer to the red symbol on Doom Slayer’s hand, but rather, it represents the song by Black Sabbath, known as ‘Hand of Doom’. The relevancy of this tattoo originates from the user’s wish to project their liking for this insanely popular symbol in the game or it can be a way of using Doom to also represent their favourite Black Sabbath song.

The first tattoo is a chibi or mini version of Doomguy being carried or lifted by a creature similar to a cacodemon. This is an incredibly cute tattoo that takes a different approach than the standard Doom tattoos we see. The second one showcases Doomguy and his bunny, the relevancy of this tattoo is the symbolism and the backstory revolving around Doomguy’s bunny that most Doom fans are aware of. Though it is quite the sad backstory, the tattoo does the bunny justice by showing the animal fighting side by side with its heroic owner. It’s also a great tattoo for people who love bunnies in general but think these animals are badass.

This particular demon can be highly relevant for you, especially if you like monstrous creatures with wings. Dark, grotesque and demonic elements are all there in this tattoo, and additionally, you get the choice to showcase a creature that has quite rarely found itself imprinted on people’s skins rather than just inside the gameplay of Doom or your browser.

The first tattoo is an ultra-cool Icon of Sin tattoo that has been drawn over highly realistic sigils that almost seem like there are glowing. This particular demon is one of the most powerful bosses in Doom games, being notoriously tough to defeat. The second tattoo also represents another devilish creature from the game which can very well be the fuel for nightmares. These are great tattoos for individuals who accept the dark beauty of these tattoos or love the relevant hellish settings that the game offers. These are great options for individuals who wish to get a demon buffalo tattoo or a demonic goat tattoo as well.

This is a great example of how Doom’s version of hell would look in a tattoo. You can almost hear the cacophony of hell alongside the high-pitched shriek of the revenant monster. This is a super cool tattoo to have for any Doom fan. These revenant demons are fundamentally animated corpses that shoot missiles from shoulder-mounted launchers. This artwork implies massive temperatures and also represents the destructive power of this creature.

Arch-Viles are enormous humanoid demons with an extremely grotesque appearance. They are the worst of the worst, especially with the ability to resurrect dead demons. An Arch-Vile finds it hard to accept that the player is trying to kill him, rather, these villains find it hard to accept why they are being killed in the first place due to feeling like they are just helping their fellow demons. An Arch-Vile ends up hilariously killing other demons in their wake by disintegrating them with fire. However, they again reanimate these demons, this makes these Arch-Viles even scarier, harder to understand and also cements the reason why they are said to possess a dual personality. This is a truly interesting tattoo to have, especially if you wish to represent something more intrinsic about human rage, nobility and confusion.

This is one of the most popular catchphrases from Doom, implying how much destruction Doomguy will leave in his wake. This is also another great way to quickly define the core objective in Doom games, fundamentally, the act of ripping and tearing demons apart. And our undefeatable hero must keep doing this forever, especially due to this seemingly endless war with the entirety of hell, wars that are fought over even on planets such as Mars. This phrase can be easily identified by both English-speaking and non-English speaking players.

This is one of the most insane tattoo ideas that would make any tattoo fan go crazy. Regardless of how much a person is familiar with the highly immersive game, this tattoo can definitely make the person stare in awe. This is also beautiful artwork that can be appreciated by most creative individuals. Here, Doomguy represents ‘Death’ while the revenant fills the role of ‘The Fool’. Finally, the Icon of Sin or the final boss who has been present throughout the various instalments of the game is depicted by ‘The Devil’ here. This is an impressive tattoo that has blended the properties of Tarot Cards with the distinguishable characters of Doom and their aspects.

There are Doom fans out there in every corner of this world, either having played the older instalments, the more modern ones or all of them, thus making these tattoos as popular as possible. You can choose to check other relevant tattoos such as a Doctor Doom tattoo or an MF Doom tattoo if you like the look Doomguy’s helmet has to offer.