101 Best Eeyore Tattoo Ideas You’ll Have To See To Believe! 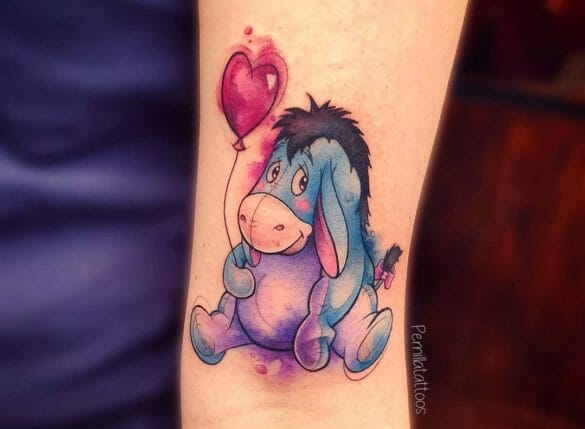 In search of some creative Disney tattoos that spark up nostalgia? Here is a list of some of the best Eeyore tattoos to walk you down the memory lane!

Disney made many great shows but none made us laugh as good as Winnie the Pooh.

Pooh and his friends are all dear to their audience. Be it Tigger’s overenthusiastic spirit or Piglet’s stammering, anxious banter, we have stored them all in Pooh‘s pot of hunny.

So is the lifeless, perpetually sad donkey Eeyore forever in our hearts. Looking back, we must have realized that it was not his choice to be sad and drooping all the time. Eeyore wanted to feel happiness but perhaps didn’t know how to. So he accepted things as they came to him with a gloomy face, but hey, acceptance after all. If you have been a devotee of the show and have a soft corner for the cute donkey, a tattoo might be a good idea to mark permanence with. Eeyore tattoos are a lot popular than you might think. He is one of the many Disney characters that get etched as body art as a sign of nostalgia, or perhaps pastel aesthetics. Pooh bear tattoo ideas are in abundance, but we have a little more of something for our spirit animal. Read on to find some of the popular designs for your Eeyore tattoo!

Here we open the box of memories with this quintessential Eeyore with his sad face but oh so curious eyes. The artist uses a light touch of grey and a soft pink to colour this adorable little puff. Black outlines define this dainty piece, making it an apt tattoo for your forearm.

If your tattoos are not all about the fuss, take the minimal route and draw inspiration from is delicately drawn Eeyore with a balloon. Plain black ink is used to both outline and fill in enough detail. You can site this design on your ankle or the elbow area to gather all the aww-s coming your way!

This Winnie the Pooh tattoo is so small but so cute! The artist brings the full gang to the forefront and experiments with only outlining and colour. It won’t take you a second to make out who is who, rather it is a creative way to go about your Disney tattoo. Shrink your characters to icon-sized without compromising on the essence. You can site this tattoo near the wrist as is shown in the picture, or place it right above your elbow for full exposure.

Doesn’t seem like a tattoo, does it? With the colours bleeding out of the sketch of Eeyore, this tattoo design seems like a snap from a canvas. The tattoo artist strikes a balance between imparting and devoiding colour on the Eeyore. The technique fits perfectly with Eeyore, given colour of his body and his vibe. If you are keen on experimentation, add some butterflies and flowers around to focus on Eeyore better.

Want to portray the extrovert and the introvert from Winnie the Pooh at the same time? You might want to keep your arms clean for these two bubbles of joy. While both the characters are inked with bold black ink, Eeyore is enclosed within a balloon, and Tigger is accompanied by his springy tail. You can also add colours to this piece and make it a miniature, bubble-sized version of the two characters.

This tattoo design best portrays a happy little Eeyore accompanied by a tiny bee. The outcome may seem really simple, almost banal, but when looked closely, you can see how delicately it is shaded and outlined to present a close resemblance. This baby Eeyore is bound to win hearts once you place it near your wrist or the neck.

Bunk the gloominess and paint your Eeyore tattoo with the colours that you associate best with him. Accompanied with flowers, bees, butterflies, and a splash of radiant colours, this tattoo brings back in mind the first sight of A Hundred Acre Wood in Winnie the Pooh with all its pristine stature. Eeyore on a handstand and brimming with colours still seems to be a bit sad but that’s how we love him, don’t we? You can site this tattoo on your upper arms, or the upper back, as shown in the picture.

Eeyore With The Red Balloon Tattoo

Eeyore and his favorite coloured balloon in his favourite shape. Of course we remember, it’s Winnie the Pooh! The clouds are brilliantly placed in this tattoo, attempting to produce a 3D illusion. The bright red of the balloon complements Eeyore’s grey and pins an apt image from Winnie the Pooh memory box. This might work really well if you are willing to go for full-length tattoos on your arm or calf.

Eeyore touched us with his quotes and there is no denying this fact! This one is of the most popular of his quotes that says myriads in so little. The quote was obviously a trifle back then, but as we turn back, we see what Eeyore really wanted to emphasize- gratitude. We hope for the good and become optimists. Being a pessimist brings forth gratitude for what we have, knowing the many ways things go wrong. Pairing this quote with Eeyore’s tail is a unique way to maintain symbolism and minimalism in tattoos.

If you prefer monochromatic, full-figure tattoos, this design will serve as a good inspiration. Sketch tattoos as this one pins primarily on linework and black ink, resulting in a design that resembles freehand sketching on paper. This Eeyore shows similar lines and dots that do full justice to the sketch tattoos.

Winnie the Pooh tattoo is a well-accepted tattoo design that is often associated with nostalgia and a yearning for the past. Eeyore tattoos are a good choice for anyone who would love to celebrate their inner child. To ease your search for more Eeyore tattoo designs, here are some suggestions for your tattoos: