101 Best Swallow Bird Tattoo Ideas You Have to See to Believe! 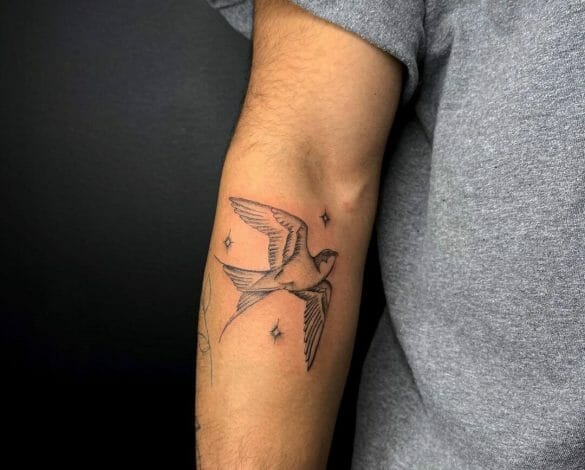 Looking for the best swallow bird tattoos and ideas? Discover some of the most gorgeous tattoos right here on this list compiled by us!

The swallow is a small-sized bird that is found all across the world except for the continent of Antarctica and can migrate over long distances.

Swallows have had a role in various cultural significance and have different meanings to them throughout their use in art and literature. This bird is often linked with sailors as swallows are the first things sailors see when they come across land.

In Greek and Roman mythology, the swallow represents a departed soul that took the form of a swallow. The swallow has often been termed as a spirit animal by people and in a broader sense is used to represent happiness, peace, grace, and strong character. Swallow tattoos are also used as symbols of patriotism or respect as indicated by many attractive designs that sailors tattooed themselves with as a lucky charm. Nautical symbols like ropes and anchors are often used with swallow tattoo designs.

In Egyptian poetry, the swallow is the one that brings the first signs of new love, making the bird great for two lovers who want to express their feelings towards each other through the usage of this bird tattoo design. Symbolically, two swallow tattoos symbolize a long journey.

In the nautical world, the swallow is a bird that is believed to bring good luck charm to sailors and has become a part of the many bird tattoos that sailors can be often found sporting their bodies.

This large swallow bird tattoo design is a great idea for people who have a deep-rooted affection towards the sea and the ocean and want a medium-small swallow tattoo to show their love for the adventure that comes with traversing the seas.

This has become an iconic American swallow tattoo idea that is now common among sailors.

If this design is too much for you, then you can ask your tattoo artist for different body art in the form of the tattoo below which is a minimalistic design with elegant lines and brighter shades.

The double swallow tattoo idea was popularized by sailors around the world as they would get one swallow inked to mark the beginning of their journies and the second when they finished their journies. These swallows meant that the sailors sporting them were badass and traveled far and high into the seas and completed a daunting task.

Dual swallow tattoos were used as a symbol to cherish and respect one’s country. However, they can also have other symbolic meanings as per your preference as swallow tattoos are alterable and you can ask your tattoo artist to integrate your ideas into the tattoo.

This is yet another fine example of the many dual swallow tattoos that are popular among people with the only difference being the swallow birds filled with colour.

Soaring swallow tattoos have become quite a common occurrence in the world of tattoos as swallows flying symbolizes the bird’s free and nonchalant nature that is often on display when swallows fly around.

This tattoo design is a great one-swallow tattoo idea as the bird is neatly drawn as it follows a dotwork based design where the tattoo is drawn with a multitude of dots instead of the basic full line or fills. This style helps in bringing out the best of the tattoo through intricate detailing which varies according to the distance from which such tattoos are seen.

The white belly of the swallow is on show, but you can change it according to your preference if you want a more colorful tattoo on your body.

This tattoo is another example of the soaring swallow tattoo idea that can work for you if you are in the search for soaring bird tattoos. Since the design is flexible, you can also change the blue colour of the face to give it a brighter look by using orange cheeks on the swallow.

Abstract tattoo designs are one of the most common forms of tattoos as they are often inked by people who want to take a step away from the usual in the search of something different, allowing them to portray their thoughts and beliefs unusually.

If you are such a person, then swallow tattoos like this design is your cup of tea because of the amazing detailing that has gone into this work.

The base concept of the swallow is kept as it is with a hint of colour in the design and it is framed perfectly by a sky blue frame that gives the tattoo a certain amount of swagger.

However, if you are not sold on the base design and want to change it up a bit, you can keep using the same image by using it as a base and getting another swallow added to the tattoo, with both swallows inked with different colours to make them look unique to one another.

If you are looking for an even more abstract design then you can also check out this cool origami swallow tattoo idea that will help you in figuring out your swallow tattoo meanings.

As we already know by now, there are various swallow tattoo meanings, each with a different approach based on your own life and decisions.

The swallow being impaled by a dagger is one of the most famous swallow tattoos as here, the presence of the swallows’ symbolizes a fallen comrade as these tattoos are widely using by sailors to pay tribute to their mates.

However, swallow tattoos like this are not just limited to sailors as anybody can get this tattoo to pay tribute to their loved ones who have passed away.

This European swallow tattoo can be easily paired with a swallow bird with stars tattoo as they both aim to be used as a design that will help you in remembering your deceased loved ones.

In this day and age, geometric tattoo ideas have come to the forefront of the tattoo industry and are one of the most popular tattoos that people can be seen sporting on their bodies.

Geometric tattoos make use of the precise and intricate formation of shapes to bring out the best of the tattoo while keeping the basic concept at the show.

Swallow tattoos can be integrated into various form factors and portraits and this amazingly detailed tattoo is a great example of how even the best of shapes and figures can help the bird in taking centerstage as the bird is drawn well enough to attract the attention of itself with everything going in and around the figure.

If you are in the search of thought-provoking swallow tattoos then this tattoo is something you should look into! This tattoo can also be used as a tribute to the various ancient Greek and Roman philosophers that excelled in their fields.

Swallow tattoos are delightful and since these birds get along with many other birds in the wild, other birds can be combined with swallow tattoos for a mixed look with the swallow meaning one thing and the other bird meaning something else.

This design makes use of the raven, which is seen as a dark character and is linked with death in most cases. These birds have been part of ancient and modern literature and are surrounded by a veil of mystery that can be used to portray a message that can fit your preference.

Compared to the raven, the swallow is used to portray positivity as it symbolizes positiveness and uplifting behaviour.

This swallow and raven tattoo idea is a great combination for you if you are someone who likes to shroud themselves in a bit of a mysterious aura!

Oriental tattoo ideas like dragon tattoos are rapidly becoming one of the most popular styles of tattoos and are known for their rather intricately detailed artworks. These tattoos are so detailed that they are often completed in several sessions and will make a hole in your pockets! However, they are worth it due to the numerous variations and styles they come in.

Swallow tattoos like this design make use of the oriental style and implement various symbolisms in them that bring out the best of the tattoo idea.

This tattoo is an amazing example of the style as it incorporates various elements that can on their own, symbolize several things, for example, the butterfly portrait represents faith and freedom, whereas the swallow represents independence and a new beginning.

Tattoos like this depend on your preferences as you can add any number of elements in them to make tattoos that are unique to yourself.

This tattoo is another great example of an oriental tattoo that you can think about getting inked on your body!

Tulips are one of the most recognizable flowers and are often deemed as the perfect flower because of the symbolism that they come with. Tulips are a great way to portray love, passion, and opportunity, and a red tulip, like the one in this tattoo, is a symbol of deep love.

These flowers can be combined with the swallow tattoo design to give them a much more appealing look as you can add your meaning to it by adding elements that are symbolic to you.

The swallow and the tulip are drawn neatly and the swallow carrying the flower can be interpreted as a symbol of your love towards your significant other. So, if you want to show your love towards to spouse, then this swallow tattoo is something that you should consider!

Neo-traditional tattoo ideas are used to bring out the best of a tattoo idea by implementing the usage of bright colours in the design that help in creating a tattoo that will turn out to be a head-turner!

This swallow tattoo is one such design as it uses bright colours and a silhouette of a woman in the wings that adds an element of mystery to the design.

If you are a fan of such hidden-detail tattoo ideas, then this tattoo will make the most sense for you and it will leave an impression on people who get a glance of it!

What is the swallow bird tattoo meaning?

What is the history of the swallow bird tattoo?

How much does a swallow bird tattoo cost?

The cost of a swallow bird tattoo will vary depending on the size, complexity, and location of the tattoo. Tattoos can range in price from a few hundred dollars to several thousand dollars. The cost of the tattoo will also depend on the artist who is performing the tattoo and their experience level.

What are some popular swallow bird tattoo designs?

There are a variety of popular swallow bird tattoo designs that people often choose from. Some popular designs include traditional swallows, nautical swallows, and colorful swallow tattoos. Swallow tattoos can also be designed in a variety of different styles such as realism, watercolor, abstract, and more.

101 Best Lilo and Stitch Tattoo That Will...