101 Best Shooting Star Tattoo Ideas You Have To See To Believe! 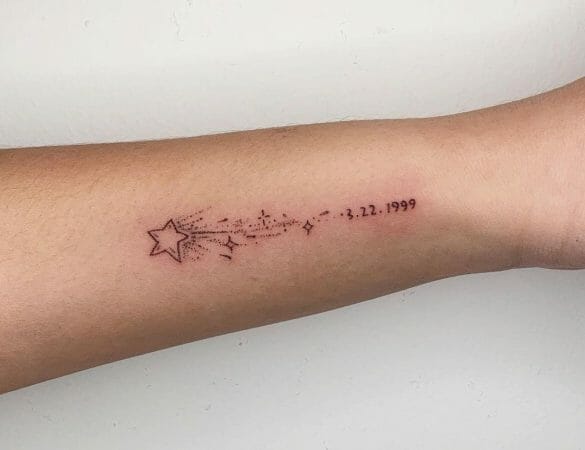 If you’re looking forward to getting a tattoo that resembles your dream, here is a list of some flawless shooting star tattoos that can blow up your brain.

A shooting star, or practically a meteor, is a small speck of dust from space that burns up to 65 to 135 km above the Earth’s surface owing to the fact that it plunges at terrific speeds.

Shooting stars are generally considered wish granters. When you spot a shooting star and make a wish while it passes, it is most likely to come true.

A shooting star tattoo is as symbolic as a tattoo can get. It is commonly known that one should get a tattoo that is more than what meets the eye. Getting meaningful tattoos adds value to the same while it matches your aesthetic. When you are a dreamer, can you think of anything else that depicts a dream better than a shooting star does? Shooting star tattoos are the best symbols for a wisher, and a person likes to dream big and never shy away from wishing more.

Getting a tattoo isn’t always the easiest of the chores as it requires a lot of thought to be put into it, and if you desire to get a shooting star tattoo, these shooting star tattoo designs can help you to get the ink of your dreams, and all the other dreams will probably be taken care of by this star tattoo on the favourite part of your body!

Honestly speaking, there is no better and no more beautiful part of a human body than a collarbone to get a tattoo. Tattoo ideas can be found everywhere but looking for designs that actually suit you can get tricky. This particular shooting star tattoo is one whose aesthetic is beyond comparable. Having been designed on the most alluring part of the body, with three lines and five differently-sized stars, this tattoo has the capacity to win a million hearts.

Not all tattoo designs are supposed to be big. Small, sophisticated tattoos can do wonders for your first ink. This small shooting star tattoo is the best design for you, assuming that you are a dreamer!

It is not uncommon to hear someone calling themselves a mess, and a tattoo that can represent that exact feeling is the dream, isn’t it? It is an achievement for many people to manage to get their first ink exactly as planned. Shooting star tattoo designs aren’t tough to find, but to find the perfect one is an interesting endeavour. A realistic shooting star tattoo is the one that actually shows that not all dreams are sorted. Most of the dreams are messed up, but that doesn’t mean you should stop seeing them. This tattoo is the perfect representation of the fact that even unclear things can be immensely beautiful. This shooting star tattoo on your arm shows how things can perfectly make sense to you even if they fail to make sense to others. Your style should be your own choice, and the feeling that you get every time you see your tattoo should be irreplaceable.

It’s pretty common that big tattoos with complex designs tease the brain and are desirable to be looked at. But at the same time, a shooting star tattoo design that is as simple as this one can steal hearts without making much effort. A straight line with a single star inked on the perfect place, the side of the wrist, and the style giving a sense of hope, this tattoo has all that it takes to get a flawless tattoo. The shooting star tattoo designs that you find here are meant to fill the purpose of your tattoo to help you to come off as a dreamer.

The Most Sophisticated Shooting Star Tattoo Of All Time

Not all shooting star tattoo designs look as polished as this one. The clear design, pure image, and a feeling of hope that this tattoo gives are exactly what one desires for in a tattoo. Although sizes aren’t the most important factor while getting a tattoo, the tiny element of this tattoo gives it a unique aura. While a shooting star tattoo design that has three stars that are aligned in a pattern, with each star being smaller than the first, depicts the journey that was taken and gives a beautiful meaning to the tattoo having the ability to show the trajectory of life, this simpler tattoo with a line and a small star at its top creates the purpose of the life to be delicate but unambiguous.

A glamorous star atop a single, straight-line: doesn’t this design sound like the logo of a fancy company? An ideal shooting star tattoo studio can fulfil your aim of getting a perfect tattoo. With designs ranging from complex things to tiny and clear like this one, be it the logo for your brand or a tattoo for your arm, the meaning that a shooting star can give you isn’t possible by many designs. The fact that this tattoo is made on the wrist adds colour to it along with its charming design.

The Moon And Star Tattoo

The tattoo of the appealing galaxy has something in it that keeps our hearts. Generally speaking, the moon is seen as being feminine, the sun as masculine, and stars are seen as children. When you see a tattoo with a moon and stars, it could possibly mean that it is representing a woman with her children. But that isn’t always necessary; it could always just be aesthetic. If you are given a page filled with designs of shooting star tattoos, choosing one like this will be in your favour due to the appealing nature of this tattoo.

Is it wise to be childish about your tattoo design? This is the wrong question. What matters is how you want your tattoo to be and nothing else. This tattoo with the most adorable star doodle you can find with what seems as if it’s stardust is the perfect choice for someone who wants to get a shooting star tattoo and wants a different touch to it. With the coloured sprinkles and three tiny stars, the art in this tattoo isn’t comparable to many. The reason for you to choose this design is quite visible by seeing the tattoo’s childish touch owing to the doodle design.

Glitter makes everything better, and that is a fact. This tattoo with glitter surrounding it, the flawless shooting star, and the little stars that add a flavor to this tattoo that makes it magical.

A tattoo can be a lot of things, including the prettiest thing on your body, and this one indeed has that capability. This design compels you to believe that tattoos can be unfathomable as well.

While it is known that a butterfly tattoo has the ability to represent faith and freedom with being the epitome of natural beauty, the shooting star tattoo meaning becomes pretty obvious too when looked at what a shooting tattoo shows. These were some tattoo ideas that must have given you a good idea about how creative you can get with your shooting star tattoos.

Apart from the star tattoo mentioned above, you can find the ideas illustrated by the artists. Some of our personal recommendations of designs you may like:

What does a shooting star tattoo mean?

What are the different designs of shooting star tattoos?

Shooting star tattoos come in a variety of designs, from simple and minimalistic ones, to complex and vibrant compositions. Most often, the star is depicted as trailing behind a bright, long tail that ends in a point. Other popular variations include stars with several trails or tails that change colors or curl up into spirals. Some shooting star tattoos may feature an entire sky full of stars, while others include inspiring words or messages within the design. Ultimately, a shooting star tattoo is a perfect way to express yourself and your individual style.

How much will a shooting star tattoo cost?

The cost of a shooting star tattoo will vary depending on the size and complexity of the design, as well as the skill level of the artist. Generally, small to medium sized tattoos may cost anywhere between $50 to $200, while larger ones can range from $300 to $1000 or more. It is important to research and compare prices from different tattoo parlors to get the best deal. Additionally, some artists may offer discounted rates for larger pieces or cover-up work. Ultimately, the cost of a shooting star tattoo will depend on your specific needs and budget.

What are some of the most popular shooting star tattoo designs?

Some of the most popular shooting star tattoo designs include a single large star with long trails, multiple stars with intertwining tails, and stars falling from a night sky. Other favorites include abstract geometric shapes or patterns within the star design, as well as colorful watercolor variations. Additionally, some people choose to incorporate inspirational words or quotes into their shooting star tattoo, such as “reach for the stars” or “always believe.” Ultimately, a shooting star tattoo is a great way to express your ambition and creativity.