10 Best Three Star Tattoo Ideas That Will Blow Your Mind! 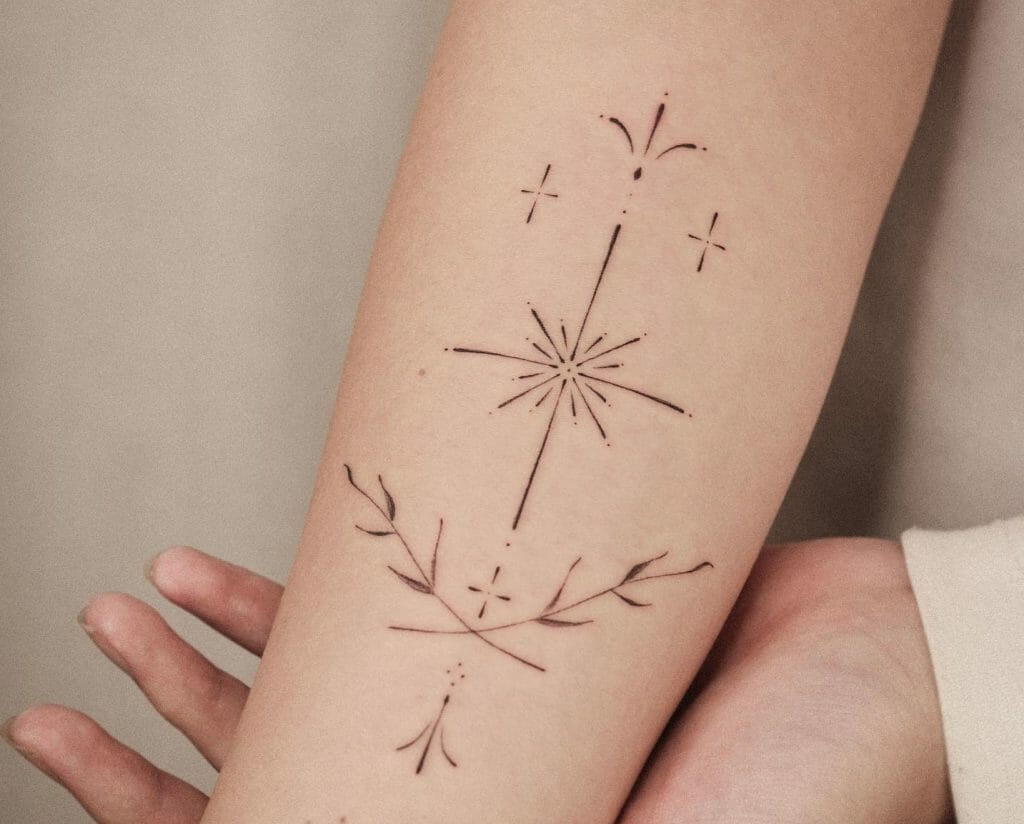 Are you planning to get a three-star tattoo? Here are a few interesting, and impressive designs that will make your tattoo design selection process much easier!

Starting from our childhood stars have been associated with supremacy, success, and excellence, and it has been a part of our very lives.

But when talking about stars as a tattoo, a star tattoo represents a multitude of meanings like they symbolize hope, ambition, protection, guidance, destiny, and more. Whereas three stars could be for just a designer purpose, and could also mean or symbolize a journey of life, especially when in an aligned sequence.

This tattoo is definitely one of its kind. This tattoo shows the image of a beautiful lady with horns and represents the constellation named”Taurus”. The lady is shown to be covered with flowers and has three sparkling stars above her head. If you wish for three-star tattoos but also want them to look completely different than most star tattoos, then this is one of the best choices.

This tattoo if done properly is an impressive piece of body art, and this has been done using simple black ink lines, and minimalistic shading. If you want the tattoo to pop, you can also go for a few colour shade touches. This tattoo will look the best when done on your upper arms, but you can also try it out on spots like your calves, and thighs.

The Moon And Stars Tattoo

This tattoo is made to represent the night sky, and it involves a very simple and small-sized moon, and three twinkling stars. This design is most suited for a girl with strict parents because it does not pop in the crowd but instead looks gorgeous when you look closely.

This simple tattoo is made with small and delicate lines and shades of maximum precision. This tattoo is just perfect for people who are getting their first tattoo because this small star tattoo cost is very minimal, and it almost does not hurt. If people choose this tattoo, they will be out of the tattoo parlours in almost no time. These kinds of tattoos are to be made in spots that are visible so go for your shoulder, inner wrist, ankle, or your neck.

The tattoo world of tattooing has come a long way. Nowadays people and various tattoo artists find different creative tattoo ideas that are much better than previous traditional, and neo-traditional styles of tattooing. This tattoo design is also one of such kind, popularly known as ornamental tattoos. Made especially for young girls, they are meant to decorate your body.

This tattoo is an ornamental and fine line-based three-star tattoo with one star right in the middle, and two smaller sparkling stars by its sides. Other than the stars, numerous delicate, and symmetrical fine lines, and dots are made from a single needle that helps the tattoo look incredibly beautiful. Tattoos like this are meant to be shown to people so choose body spots like the forearm, upper arm, neck, shoulder, or ankle to get this done.

The shooting star tattoos are tattoos with meanings. They represent common meanings of what people think when they see a shooting star. This tattoo represents luck and excitement, and a few other people link this tattoo with achievement, prosperity, destiny, and the strive for betterment. So, anyone who has hope for a better life, and is working hard to achieve that as well as anyone looking for colourful tattoos that symbolize something about life can get this done on your skin.

This tattoo is a highly-detailed, colourful, and beautiful piece of body tattoo. This design has three consecutive, and similar-looking shooting stars, and this has been made to look as if a child’s crayon drawing. Tattoos like these are smaller in size so get this done on your wrist, shoulder, forearm, collar bone, or shoulder blades.

Very minimalistic star tattoos are popular tattoo choices because a few people especially girls are more fond of simplicity rather than huge explosive tattoos. If you are one of them or if you are on the way to getting your first tattoo then this is one of the best options. You may have a question “What does three-star tattoo mean”, three-star tattoo meaning differs, and this design is meant to represent a fate guide and to believe in yourself.

The stars are made using small black ink line strokes that are perfectly accurate. These tiny tattoos are not meant to hurt, and also required almost no time to get done. They are very small so the perfect spots for them would be your wrist, more preferably the inner wrist, upper arm, above your elbow, neck, collar bones, or ankles.

A nautical star has two meanings that are guidance, and protection. Nautical stars were popular among sailors, and they believed them to be a good luck charm. Even today, a nautical star is a symbol of guidance to achieve your dreams, and a few people get them tattooed as a remembrance star. This ink design is very popular among both boys and girls. If you wish, you can also include quotes and names above or below the star.

This particular nautical star design is quite on the smaller, and simpler side. It also has very well-created lines, shades, and the dot work on the stars are just perfect. Tattoos like this look the best in horizontally longer places like on the ribs or on the hips, and they do not belong elsewhere.

A shooting star ink design has different meanings, all starting from excitement, and luck, and ending with meanings like prosperity, achievement, destiny, and an attempt to betterment. Now if you can relate your life to such meanings then your body is waiting for this ink design. There are several designs you can go for, and this is something on the smaller, minimalistic, and cuter side.

This particular ink design has a red star, blue star, and a shooting green star which are tiny, and are made using very simple strokes of line. This is also a design that, if necessary or if you wish for, there is lots of place for your own creativity. If you are thinking about this design, your wrist, ankle, and neck would be just perfect.

This ink design is a combination of two very different tattoos with a strong meaning. Star tattoos symbolize success, ambition, hope, honour, protection, goals, and sometimes remembrance. Whereas the meaning of the ace of cups tattoo is love, joy, inner peace, feelings, imagination, and sometimes fantasy. Go for this design only if it has a meaning for you.

Behind The Ear Three-Star Tattoo

Most people think there is no meaning for a three-star tattoo when it is done behind the ears. But, in reality, a three-star tattoo behind ear meaning is to follow your self-made path and listen to yourself. There are various creative designs you will find for behind ear tattoos but the three stars is undoubtedly one of the best you can choose.

Well, this ink design shows three bigger stars made with black ink and ultimate precision, and there are also a few small black dots made around the which represent the far away stars. There is no compulsion in using only black ink, you can also try out various colours. This design is best done as behind ear tattoos but since it requires a very small skin area you can get it anywhere else.

A tattoo on wrist meaning is literally uncountable because it depends on the tattoos you are getting but when we particularly talk about three stars on your wrist, the meaning is the journey to success. People intend to get the three-star on their wrists or anywhere else to show that they started from the lowest point, and now they have achieved the best.