10 Best Star Of David Tattoo Ideas You Have To See To Believe! 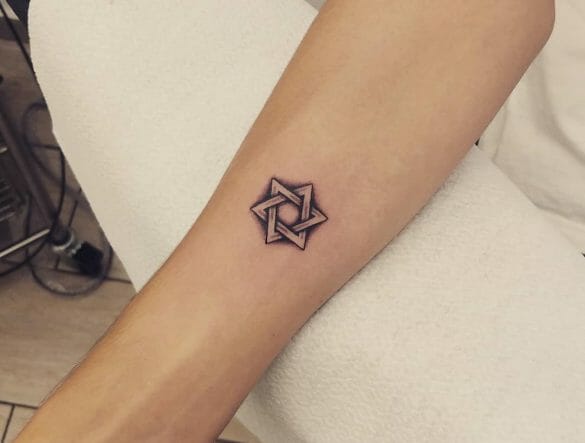 Want to ink the significance of the reverent symbol Star of David? We have just the right ideas to inspire your next Star of David tattoo!

The Star of David is a famous symbol with a religious meaning that has changed over the years.

The Star of David has had myriad connotations attached to it. This old and mysterious symbol is perceived differently in different religions.

Most prominently observed as an emblem found on the Israel state flag, the six-sided star, also known as the Magen David in Hebrew, is a revered symbol used in religious scriptures and cultures. It also symbolizes Judaism and Jewish culture all over the world through its believed meaning. History says the 6 point star is meant to narrate the rule of God over all the people who keep this sign close to them. The hexagram shape of the star lets God guide and protect people from all six directions- north, south, west, east, up, and down. Besides Jewish people holding the David star sign close to their beliefs, even the Asian culture is related to the holy symbol. Chinese people relate the hexagonal star to the origins of Yin and Yang.

The symbol never carried a negative meaning to it. Through the years, with its use and significance in historical events like Holocaust, the symbol held purposeful meanings to give people hope and strength. For some, it is a symbol of martyrdom; for others, it symbolizes the benevolence of God; however one perceives it, its appreciation is getting popular in the form of tattoos. Star of David tattoos is finding great preference amid Jewish people and individuals who wish to carry memorable symbols on their bodies.

With soft colours and shades, watercolour-inspired tattoos are making a rapid round around social media spaces as the biggest trend. Discreet tattoo ideas or a widely showing one; a little colour can sprinkle magic. The same magic is used to amplify this simple Star of David tattoo into an astonishing one. Rainbow splashes add to its distinctive character to elevate it a step ahead, which would’ve been bland with just a simple star.

Star Of David And Cross Tattoo

A fusion of two beliefs in one artwork, this Star of David tattoo recognizes two closely related religions that find their roots back in the holy grounds of Jerusalem. Jewish Christians looking for tattoos that successfully illustrate their beliefs may find inspiration from this Star of David with a cross tattoo. The tattoo above smartly combines two symbols of Jewish and Christian cultures to form a simple yet striking artwork. Even the star tattoo meaning is strong enough not to need any inclusions; hence the basic black and grey colours are appropriate to represent the religious belief.

This Star of David tattoo carries the depth of a pencil-shaded artwork with the brilliant ink wash technique. Adding a unique flair to a plain tribal Star of David tattoo, this one induces a wow factor through the fading colour patches. Even the basic interlocking design looks aptly melded with a splash of greys around it. One may look forward to such tattoos for their hands, arms, back, or shin.

It is hard to maintain the authenticity of a design while adding a creative twist to it. Surprisingly, this piece still aims and does the same, successfully with an amazing Star of David tattoo. A completely new take on this Jewish symbol of reverence, this spooky star is made out of human skeletal hands and bones to create a dark-themed tattoo. It may represent the never-ending cycle of life, as rebirth and reincarnation are esoteric beliefs among Jewish masses. The concept used a fine line tattoo style depicting it neatly.

Religious Art With Star Of David

A beautiful amalgamation of different religions across the globe, the above tattoo captures the essence of humanity with how beautifully they merge and coexist in this illustration. Instead of diverse illustrations depicting popular religious values, the artist has successfully united all the meanings in a single work. This one-of-a-kind illustration carries religious symbols such as Om from Hinduism, cross from Christianity, the lotus from Buddhism, and the six-point Star of David from Judaism. Tattoo ideas as such can be great for individuals practising different religions and their values.

Tattoo Star Of David As Armband

The fierceness of Hebrew speakers is aptly depicted in this strong star armband design. The black and grey tattoo encloses a majestic roaring lion, delivering the narrative of strength and courage. The lion is not simply considered a majestic animal; it holds an important place in Jewish culture. The animal symbol came through the tribe of Judah, which depicts the lion being a sign of blessing, courage, and divine protection for the Jewish masses. A perfect tattoo inspiration in every way!

According to Hebrew scriptures, angels are considered to be supernatural beings, acting as the messenger for God of Israel. Dedication to these mythological beings, tattoos with Star of David and angel, can be introduced in your tattoo inspiration list. The tattoo above projects a statue of an angel with the star placed above its head, right on the wearer’s knees. An illustration as big as this one may need more space; hence, the shin area is perfect for getting inked with such kinds of tattoos.

A treat for Jewish seafarers, a Star of David tattoo with anchor, is a great addition to their nautical tattoo collection. The tattoo captures a neat placement of anchor enclosed within the equilateral triangles creating the Star of David symbol while a rope goes through it. It is a beautiful design that may attract any Hebrew-speaking sailor to own one. In fact, non-sailors can wear it proudly too. Still, the ones on tides will feel a bit more attached to it! Instead of a small tattoo of a star somewhere on your body, merge your passion and cultural glory with this tattoo inspiration.

Visual illusions are beautiful and seem mysterious, but getting one as a tattoo can be magnificent. The above Star of David might not appear as a star at its first glance, but the more one looks at it, the clearly they find more than just one star. The tattoo uses a set of bars, placed continuously in the shape of a triangle through intricate line work, ultimately creating an illusion of many stars. Jewish individuals looking for a Star of David tattoo, meaning it to be emphasized, may include it in their list and choose the right place on their body to get it done.

Join your love for the Jewish Star of David and reptile artworks together to own amazing tattoo ideas like the one mentioned above. This Star of David illustration is simple yet remarkable, with the smart use of the snake and its curved body. Among other things, the most striking feature of this artwork is the colour palette. Dark green, black, and the hint of yellow in eyes grant a brilliant liveliness to this piece and add to its historical meaning. Snakes hold valuable meanings in Hebrew scriptures. From being associated with divination to the messenger of Jewish God to punish the wicked, snakes are a part of Jewish culture and can be preserved as tattoos for their importance in the culture.

These are some of the best Star of David tattoo images you may seek inspiration from. Before getting inked, you must choose the right artist to read the artwork and ink; someone who knows small things such as using the right colour or significant aspects such as the significance of the star body art and the correct body part to ink it. Remember the Star of David tattoo meme images that misperceived a pentagon as the holy star symbol. A professional artist would read through the intricacies of different meanings to deliver consistency and apt illustrations, so choose the right day and the right artist to get your ink done.