Shooting Star Tattoo Meaning – Everything You Need To Know! 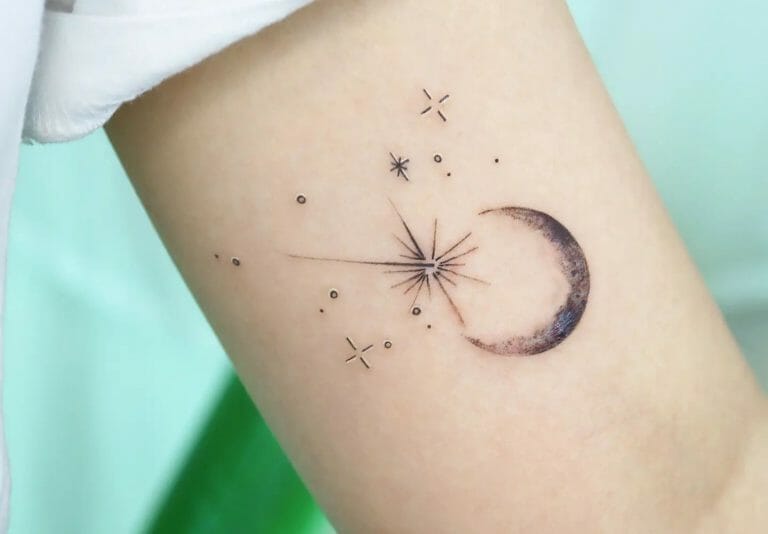 Do you want to know more about the various shooting star tattoo meaning? Here we have made a list which might help you for the next tattoo.

A shooting star is a meteor or a rock that burns very brightly in the night sky.

These meteors start to burn when they enter the earth’s atmosphere from outer space. And it usually travels at a great speed in the sky during the night.

The shooting star tattoo behind the ear has a very positive symbol. It generally indicates hopes and ambition. It represents one’s desire to succeed and achieve high goals. The meaning may also be portrayed as a symbol of finding a way or path or direction. Ear tattoo designs tend to be small and simple. Here we have a very pretty falling star tattoo design for y’all.

This star tattoo has been exactly placed behind the lower region of an ear. The falling star has been linked with black ink. The tattoo artist has made use of simple geometrical lines to draw other two stars that are on either side of the Shooting star. To make the tail of this falling star the artist has again made use of simple black fine lines. The minimalism in this tattoo is making it more attractive to others. If you want a small tattoo behind the ears then you can opt for this pretty tattoo.

At times black tattoos become boring and very monotonous. Here we have a colourful falling star tattoo just for a change.

This body art has been inked beautifully on the upper forearm area. The artist had made use of dark purple and light green inks to complete this entire tattoo. The star is in a heart shape and around it, there are colourful dots. It is giving a flower-like structure to the star. Behind it, there is the tail of the shooting star which is made with the help of fine lines. These lines are made in green and purple colours. If you want something different from the traditional black and grey tattoos then this is the exact tattoo design which might attract you.

Star tattoos generally have five sides. These five-sided star tattoos have a very deep significance lying within them. The five-sided star is a symbol of mercy, wisdom as well as justice. So if this star is represented as a shooting star then the tattoo becomes more meaningful.

This tattoo has been inked on the lower forearm area. There is a big five-sided star along with small four-sided stars. These stars are aligned just by the side of the tail of the shooting star. The tail of the falling star has been made with the help of fine small black dots. The small stars are made in the shape of diamonds with the help of curved lines and straight lines. Just at the end of the trail, there is a birthday embedded. If you want to embed your name instead of your birthday then you can surely go for it. This tattoo design is unique in itself and must be on your bucket list as well!

Sea wave tattoos are generally associated with motion, time, faith and hope. And when it is clubbed together with a falling star tattoo the meaning of the tattoo as whole increases.

In this tattoo, the tattooist has tried to portray a night sky with very minimum elements. The tattoo had few Sea waves. The sea waves are done in light blue colour and the outline of the waves has been done with black curved lines. We can also see a bright full moon which is light yellow. The craters of the moon are drawn with black lines. We can see that the sky is filled with stars. These stars are made up of geometrical symbols and are linked with black colour. The artist has made a very simple shooting star for this tattoo. The star has four sides made up of small black lines. And the tail of the shooting star is drawn with a single black fine line. The entire tattoo has been inked on the collar bone area which is just below the neck.

Shooting Star Tattoo Along With Planets

Space and planets tattoo signifies the mystery and vastness they hold. In this tattoo design, n we can see two Planets. One is Saturn and the other one is Jupiter. Saturn tattoo signifies stability and endurance while Jupiter is a symbol of abundance and knowledge. Thus a shooting star tattoo along with this planet’s tattoo design adds more meaning to the tattoo as a whole. Here the star has been drawn with the help of a geometrical circle shape. Behind the star, there is its tail. On the right side of the star, we can see the beautiful planet Saturn while on the left side we can see Jupiter. There are more twinkling stars apart from the Shooting star which are surrounding these two planets. If you are in love with space and planets then you can surely go for this tattoo design.

North Star star is also known as the Polar Star. It is one of the test stars in the sky during night time. The Polar Star can be identified in the northern sky. North Star tattoo is a popular choice among many people. This star is a symbol of guidance and direction as it was used to guide travellers in ancient times. It is also a sign of good fortune.

In this tattoo design, the tattooist has made a North falling star. As we already know shooting star is a symbol of destiny and achievement. So linking the Polar Star with a shooting star will attract good luck and prosperity. The Polar Star has been inked in light yellow colour on the skin of the lower forearm. The tail of the shooting star has been inked using various colours like blue, white and purple. This multi colour concept is enhancing the look of this pretty tattoo. This Polar shooting star concept is very unique and if you are a fan of rare things then you can get yourself this pretty tattoo.

Moon along with a star or a falling star is a very ancient sign or symbol. It has been used in many religions as a holy symbolism. The moon and star together represent masculine and feminine powers. Althouse crescent-shaped moon is a sign of creativity, motherhood, growth and manifestation. And a falling star tattoo signifies prosperity, achievements as well as destiny. So this tattoo design conveys a very deep massage. And if you are someone who was looking for a small star tattoo with deep many meanings then this is the perfect choice for you.

In this tattoo, the artist has inked this body art on the ankle skin. The star is drawn using the very basic method which is used by small kids. The tail of the star has been drawn using fine lines. The moon is placed just below the Shooting star. This is a very tiny tattoo with minimal designs on it. The entire tattoo has been made with the help of black ink. If this art is your first tattoo then you can surely get yourself inked with this awesome tattoo design.

People get tattoos for themselves on any portion of the body but there are a few trendy bodies where everyone wants to get a tattoo. The wrist is such a part of the body that everyone wants a cool tattoo. So here we have a simple yet eye-catching shooting star tattoo for you guys!

In this tattoo, the artist has drawn a shooting star using black fine lines of different sizes. Small lines have been used to show the brightness of the star. Whereas the long line has been used to portray the tail of the shooting star.

One of the most famous tattoos which have rapidly gained popularity is the finger tattoo. People are going crazy over these finger tattoos. Youngsters and teens prefer minimal design finger tattoo ideas. So here we have a very tiny shooting star finger tattoo design for you guys!

Flowers are a symbol of beauty luck as well as love. When flower tattoos are associated with shooting star tattoos it will have an everlasting impression on your life. As this tattoo design is lucky for any person who will get it inked.

So in this tattoo, the artist has made a heart using two elements, one is a flower and another one is a shooting star. The flower has a long thin black stem along with a leaf. It lies on the right fringe of the heart. And the shooting star which has been drawn with the help of geometrical shapes and lines lies on the left side of the heart. This tattoo is inked on the wrist. This is such a cute tattoo that anyone can have a matching tattoo of this design with their close ones.

10 Best Women’s Back Tattoo Ideas That Will...