10 Best River Tattoo Ideas You Have To See To Believe! 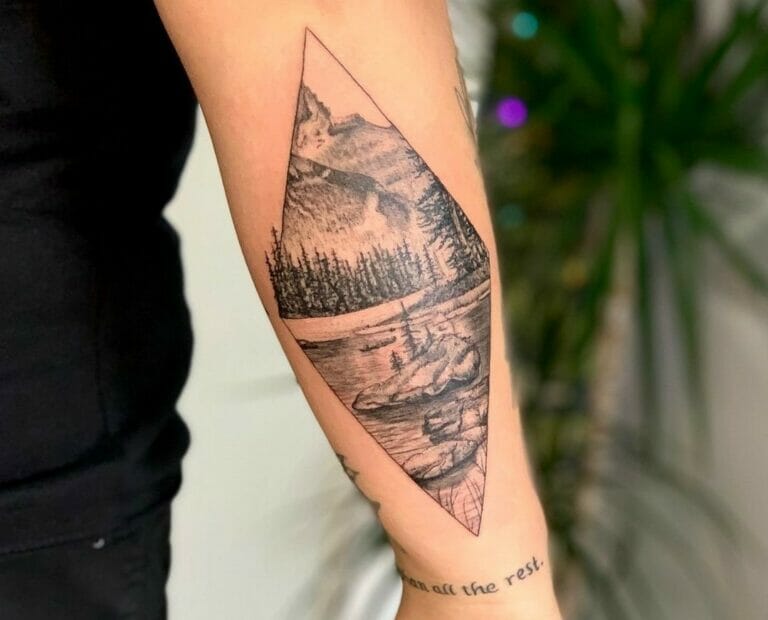 Are you a river tattoo fan? If yes, then here’s a list of some cool river tattoo ideas that will surely help you before you get one on your body.

Like any other nature tattoo, river tattoo outlines have high demands too in most of the tattoo shops.

Water bodies including oceans, seas, rivers and lakes comprise 71% of the earth surface and it is needless to mention the utility that has been served by the rivers from the beginning of civilisations in this world. No wonder the human kingdom shares a close bond with rivers.

Though water symbolises life, different water bodies have different significances. River in general symbolises strength, spirit and determination. But rivers are like human personalities. Some are strong and violent like restless and aggressive people, whereas some are gentle and serene or lively. However it is, a river should always continue flowing. A dead river is like a human without a healthy mind.

Tattoos are body art that speaks to one’s personality. River tattoo ideas come with deep significance according to their depiction of human skin. When some go for the turbulence as a sign of stern and dominating attitude, some reveal their placidness through a river tattoo. Hence people are obsessed with the mysteries of river tattoo outlines. Let us dive in then!

The Asian ‘Flow From The Heaven’ River Tattoo On Forearms

Rivers do carry symbols. Every civilisation in the world has emerged and flourished on the banks of rivers. Rivers carry the culture. The river tattoo in this image is a clear indication of the Asian culture of painting. The design reflects the traditional styles of art in South-East Asia, namely China and Japan. The flow of water in the tattoo is long, starting from the top of the forearm to the wrist of the tattoo owner. The stream is flowing down from heaven to the end without maintaining a definite direction. It clearly gives away the meaning of the journey of human life.

It is true that tattoos speak the inner voice of people. Take a look at this river tattoo carefully. This river tattoo is the outcome of the sheer artistry of the tattoo artist. The tattoo shows a river coming down from the top, falls on the head of the person measuring the depth of his mind to the bottom covering the major portion of the arm. The face in the tattoo indicates the features of a man of typical Asian descendants. The smaller figurines in this river tattoo seem to be drowning in the river of thoughts of that man. The dark blue and the black combination is equally flawless.

If you prefer scenic beauty to any other special indication, then a river tattoo is the best choice for you. A perfect sketch of nature is all you can ask for. The mountains, the trees, the lake and the narrow stream flowing down from the ultimate picture of serenity. Notice how the reflections are made on the water differentiating the lighter shades from the darker ones. The minute details in this river tattoo have been dealt with patience by an efficient artist. Before you choose anyone from your ‘Tattoo Artists Near Me’ list, make sure the artist to be a perfectionist in shading art since it will take hours and skill to get the exact sketch on your body.

Imagine drawing a real river with all its tributaries across one’s body from finger to the other side of the shoulder; that too everything in their definite positions! Crazy right? This river tattoo is perfect in many layers; a perfectly crazy river tattoo for a perfect river tattoo lover. For people who are not aware of this river here tattooed is the river Indus with its five tributaries, namely, Jhelum, Chenab, Ravi, Beas and Sutlej. An important river that links both India and Pakistan with the common history of Indus Valley Civilisation. Kudos to the artist who spent hours bringing out the perfect course of strokes in this river tattoo. If you are interested to pay tribute to your history, you can opt for any river like the Ganges or even the great Nile river.

Let us just admit that we all believe in some sort of fantasy world. So what’s wrong with getting a river tattoo that evokes our childhood love for fantasy! Dragons are a hot favourite in the world of fantasies. This mythical creature is an important character in the folklore of China, Japan, Korea, Taiwan, the Philippines and other south-east Asian countries. The dragon in this river tattoo gives away the vibe of being a Korean legendary creature, Imugi. Imugis are the hornless ocean dragons that resemble gigantic serpents, though not the full-fledged ones. Recent Korean dramas have portrayed Imugi as an anti-hero opposite Gumiho, a nine-tailed mythical fox. The tattoo is more or less simple. Different colours have been used to make it more appealing. The interesting part is that the artist did not give the ocean its conventional blue shade. If you are a fan of Korean culture and ship villains like Imugi (as shown in The Nine-Tailed Fox), wear your confidence and go for it!

The Most Minimalist River Tattoo One Can Ask For!

A minimalist river tattoo? What’s that? Just a curved line! That’s it.

In most cases when people want a simple design for their long river tattoo, this super simple one is something they can barely ignore. But do note that, this is not just a curved line with another line drawn with it, but the Buna a.k.a Bojana River Europe! It is a short river in Albania that flows to the Adriatic Sea. It is a perfectly drawn real river with its tributary, the Great Drin attached to it. The river itself lends the impression of downright minimalism and so the tattoo. Though this river tattoo is like ice on the cake for the Albanian people who want that crazy real river on their skin, you can totally accept it as your own! Because, seriously, who cares!

The Sword And River Tattoo

A sword tattoo represents bravery and strength. This sword and river tattoo can be a fine choice for gamers. The work of shading is splendid on the sword. The stream of the river is carefully inked with patience. Determination of river is combined with the symbol of bravery of the sword in this river tattoo.

The Soothing Crane And River Tattoo On Arms

Not everyone praises the grandeur and strength of the river. The tranquillity of the river is a therapy for one’s restless mind. This river tattoo is the messenger of peace. The bright blue colour of the river beneath the flying cranes reveals the calm and composed character of the owner. The light and dark shadings on the river with fine lines add more perfection to this simple river tattoo. The cranes add further elegance to the piece.

Sometimes the most conventional things do the magic. This one is a very basic design for a river tattoo. The flowers and leaves though look mismatched change the whole outlook of this too common river tattoo. The dot work on the leaves adds more weight to it.

The Woodcut River Tattoo For The Old School Soul

Though not many people are aware of this, this unique style has managed to draw attention in some specific tattoo shops like East River Tattoo in New York. This woodcut tattoo reminds us of the older days; specifically the days of woodcut printing. Nature scenes go well with the wood carvings and will surely go well with tattoos. This river tattoo is an outstanding example of a woodcut tattoo. The clouds and riverbeds are drawn carefully with bold lines. It’s a guarantee given to tattoo enthusiasts that this river tattoo is enough to catch the eyes.

So, type ‘Tattoo shops open near me’, find the one you like, walk into the shop and get it done! Happy inking!

Here are some suggestions for you: