10 Best Dragon Tattoo Ideas You’ll Have To See To Believe! 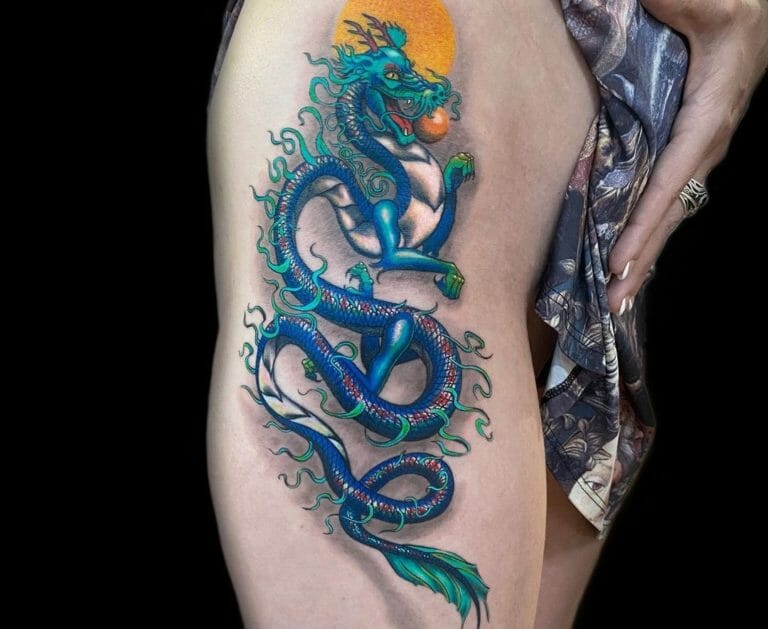 Willing to ink some cool Dragon Tattoos on your skin? Check out the top 10 best Dragon Tattoos from this exclusive list to intensify your ignited souls.

A Dragon is a mythical creature with an intimidating serpent-like appearance.

It is a significant symbol in the Chinese Zodiac. Moreover, the Dragon implies fire, nobility, energy, good luck, and power.

You may remember the Dragon Tattoos featured in the movie ‘The Girl with the Dragon Tattoo’. In 2011, Columbia Pictures produced this neo-noir psychological thriller in theatres. This film derived its inspiration from a novel written by Swedish author and journalist Steig Larssen. The director and screenplay writer is David Fincher and Steven Zaillian, respectively.

The protagonist in the film “The Girl With The Dragon Tattoo” is Mikael Blomkvist, a journalist played by Daniel Craig. Similarly, Lisbeth Salander is also a lead character which Rooney Mara portrays. It story of Mikael Blomkvist investigation. The intention of Blomkvist was to uncover the mystery as to how the girl from a wealthy family disappeared 40 years ago. He hires with the guidance of Lisbeth Salander, who was a computer hacker. There are ample instances where you can get inspired by her character and implement it as a Tattoo Idea.

In Larsson’s novel, “The Girl With The Dragon Tattoo”, the depictions of these characters inherit a brutal version of the cruelty upon women in modern society. This novel is often associated with some dark mysteries. If you read this novel, you will get a clear idea about the personality of women who teaches a certain amount of boldness and enigma within themselves. And since, Lisbeth Salander happens to be an icon among many women, the dragon tattoo can be a great one to wear.

Other popular films are “The Girl Who Played With Fire” and “The Girl In The Spider’s Web”, respectively. The box office bombs are the sequels of “The Girl With The Dragon Tattoo”.

Thus, implementing these ideas as a Dragon Tattoo Design from “The Girl With The Dragon Tattoo” combines many added elements to your overall persona.

The Girl With The Dragon Forearm Tattoo

This black and grey Dragon Tattoo has intricate details throughout its design, making it one of the most fashionable tattoo designs to go for

If you watch the film “The Girl With The Dragon Tattoo”, you can derive loads of ideas from the character Lisbeth Salander. She has an enormous dragon tattoo on the back.

After being abused, Salander promptly goes and makes a tattoo. The act functions as a calculated assertion of her control over her own body. Her Tattoo style will encourage other women to embed this Dragon Tattoo on their bodies. The Girl With The Dragon Tattoo can be applied on your legs as well.

Shenron is an enchanting Dragon from the Dragon Ball franchise. This tattoo style has an everlasting impact upon young people who wish to ink their favourite DBZ Dragon Tattoo in their life. During your childhood days, you might have watched Dragon Ball Z. As an add-on, you can add the dragon balls in front of Shenron too. This kind of Dragon Tattoos has so many elements that will make you nostalgic. The style of this Dragon Tattoo has magical colours will captivate your soul. If you search for a Dragon Tattoo, this Dragon Ball Tattoo is a great option for you.

Pokemon is loved by almost everyone. If you have seen the Pokemon series, you know about Ash and the Charizard arc. Charizard is one of the complicated characters in Pokemon who was once let free.

Here is a great tattoo of Charizard, forging its path with his fire breath.In the Tattoo World, Pokemon ideas are really taking the spotlight and this tattoo might be a golden one for Pokemon lovers.

The number of Pokemon fans has one of the largest fanbases in terms of gaming. Charizard is often depicted as a pokemon with bravery and aggression. If you search for a colourful Dragon Tattoo that can remind you of your childhood shows, a Charizard watercolour tattoo can be a great find.

Are you a Game Of Thrones lover in search of a Dragon Tattoo with an equally kickass dragon tattoo meaning? If yes, this Dragon Tattoo is here to revitalise your interest in the taste of your tattoos. This grand tattoo of Drogon, one of the dragons of Daenerys Stormborn is both grand and horrifying. Both the director and the writers had meticulously created the dragon and the tattoo bears resemblance to the show and books. The tattoo integrates a host of diverse elements including the native language, symbols and elements to put forth a dragon tattoo design worthy of its reputation.

If you are looking for a wise choice for tattoos related to Game of Thrones dragons, you could check out these designs without any second thoughts. The number of Dragon Tattoo lovers is increasing drastically because of the stunning performance done by many characters worldwide. And right now these dragon tattoos are in vogue.

Although countless warrior clans used to exist worldwide, Celts were one of a kind. These warrior cults had a brutal way to execute enemies. They also had a rich lore and dragons were idolised a significant creatures in Celtic culture. A Dragon is a sign of power and wisdom . The main highlight of this tattoo idea is the intermingling pattern of the overall tattoo structure. Nowadays, Celtic music has also been in the limelight, just like the Celtic Dragon Tattoo designs.

If Celtic culture interests you, this Dragon Tattoo is worth giving an attempt. This Tattoo is best suited for people who have a warrior attitude.

In Chinese culture, is it believed that if you’re born in the year of the Dragon, you are active, strong and possess the reward of good fortune and good luck. You have a captivating personality. Moreover, you love competition and have a solid determination to win. This tattoo design has a very reddish look which represents energy, determination and strength. Chinese are known for their immense willpower and wisdom all over the world. This Chinese Dragon Tattoo can be a great find especially if you want to depict a strong-willed woman.

If you are a Potterhead, this tattoo is a one of a kind tattoo idea that you’ll love. You may remember how ‘The Goblet of Fire’ book cover introduced a violent dragon in the Harry Potter series. No wonder, it is a delight for any person who wants to get an intimidating tattoo which they can flaunt. While this tattoo may not be an imitation of the Harry Potter cover, it remains an intricate piece of work with a very detailed look into the face of the dragon. The dragon looks haunting and it seems like the dragon is charging someone.

There may be a variety of Dragon Tattoos, but this one can take the cake. You can even pep this tattoo up by adding the famous Basilisk into the mix. Basilisk was the snake that appeared in the Chambers of Secrets and is a haunting reminder of the dark chamber and the encounter between Harry Potter and Tom Riddle.

Dragons, though mythical, are considered to be reptiles. In many cultures, dragons are also represented in the form of a serpent. Serpents have been considered as a symbol of fertility in Ancient Egypt. Since dragons too seem to have scales as most of the paintings. of dragons display, a serpent can be a great way to represent a dragon. This tattoo has a lot of details and require a lot of space to work with. The twist of the serpent dragon makes the design even more alluring. While adding colours make the art pop out, you can also use blackwork too. These Tattoos are applicable for both males and females. The places where this Tattoo can be inked best is on your upper arm area, lower leg area and thigh area.

This Tribal Dragon Tattoo has a very symmetrical design that adds to the whole outline of the Tattoo. In Celtic culture, people often used to embed tattoos on their bodies. These traditions still exist utilising modern tattoo ideas. To amp it up, this Tattoo has a very detailed design if you observe. The review of this Tattoo is splendid because of its symmetrical factor.

If you wish to try out this Tattoo design anywhere on your body, you can. There are no such criteria of a preferable location in this case.

Love rainbows? If yes, this Dragon Tattoo will touch your heart. A rainbow-coloured dragon is relatively uncommon. The Rainbow Dragon swallows people and regurgitates them, symbolising death and reincarnation. Dragons are apparently associated with the rainbow in different ways. For instance, the Aztecs said that the dragon god Quetzalcoatl could see flying across the sky in the form of a rainbow.

This Tattoo has a fantastic blend of colours which makes this Tattoo much aesthetic and soothing. Applying this to your body will indeed ampul your glamour quotient. This tattoo can be inked on your chest area, back area as well as on your arms. Since this tattoo is vibrant and looks beautiful, it might be a good idea to flaunt this tattoo and place it somewhere so that it can be visible to others.

Dragons are popular beasts and the element of dragons have been used in many games as well like Skyrim and even Witcher. In its literal sense,a Dragon traditionally symbolises strong and promising powers, especially authority over water, precipitation, hurricanes, and waves. Moreover, Dragons also represent energy, durability, and success for people in Chinese and Japanese culture. The scope and diversity of Dragon Tattoos is wide as they are now quite popular, not only in the East but in the West too.

Here are some more dragon tattoo ideas mentioned below!