10 Best Osiris Tattoo Ideas You Have To See To Believe! 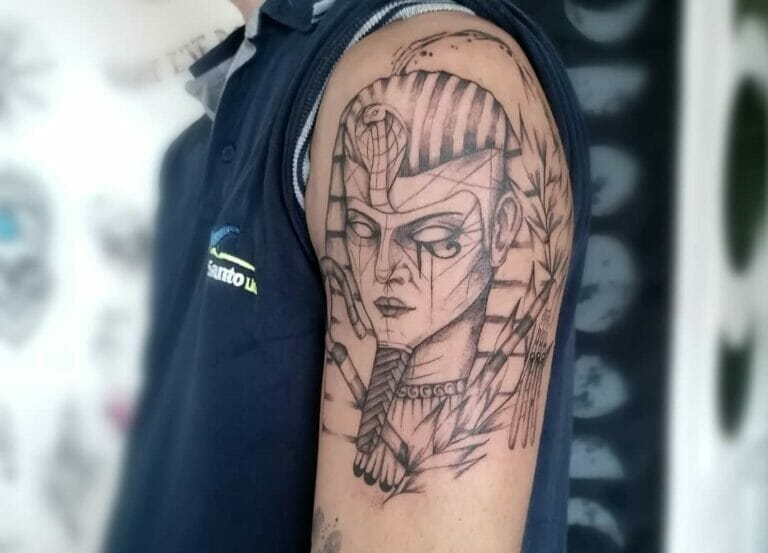 Looking for inspiration for a cool and powerful Egyptian god tattoo? Check out these unbelievable Osiris tattoo ideas!

Osiris, the ancient God of resurrection, is one of the most important Egyptian gods.

According to Egyptian mythology, Osiris was the God of resurrection and the judge of the dead. The firstborn son of the earth God Geb and the sky goddess Nut, the name Osiris literally means mighty. Although the origins of Osiris are not clearly known, he was a figure of power and royal might. So, it should come as no surprise that the Osiris tattoo has been in demand among tattoo enthusiasts looking for a complex sketch with a deep spiritual connection.

An Osiris tattoo comes with a range of associations and is not only edgy and cool but also intricate, meaningful, and symbolic – all at once. Read on to find our take on some of the most unbelievable Osiris tattoo designs!

The most famous myth around Osiris is that of his resurrection. Before becoming the god of the underworld, Osiris ruled over Egypt. However, his brother, Seth murdered Osiris out of jealousy. Seth was hungry for power and with Osiris dead, he could become the next pharaoh. However, Osiris was resurrected by the magical powers of his wife Goddess Isis, who brought him back to life long enough to have a son with him. Then, Osiris descended into the underworld where he became the Lord of the dead.

This tattoo of Osiris is a strong representation of the spiritual belief of the continuation of life after death. Technically, Osiris was not resurrected, but he lived on in the next world and through his descendants. In a cool and edgy touch, half of Osiris’ face is drawn as a skull to depict this myth. If the values embodied in this art match your beliefs, then this one is an essential addition to your ink art collection.

The Judge Of The Dead Osiris Tattoo

As the god of the Netherworld and the ruler of the deceased, Osiris was responsible for passing judgment upon the dead. Ancient Egyptians believed that when someone died, the deceased soul was brought in front of Osiris for judgment. Osiris would take stock of their past sins and decide their fate.

This Osiris tattoo, thus, is a strong representation of the values of good and evil and of atoning for past sins. It is also a mark of respect for Osiris’ role as the Lord of the afterlife. The ankh (the key of life) and the intrinsic pyramid-inspired design make this a meaningful and stylish artwork to show off on your body!

The Egyptian goddess Isis was the wife and sister of Osiris and mother of Horus. It is said that Osiris and Isis were in love from the womb. They ruled Egypt together as king and queen. When Osiris died, it was Isis’ magical power that resurrected his body and subsequently ensured his rise as the lord of the netherworld. An Isis tattoo in itself is a bold choice to represent the power of magic, rebirth, healing, and being a mother.

An Isis and Osiris tattoo is considered a tribute to the power of love and the belief in eternal life. This could be an ode to the Isis to your Osiris or vice versa. Here is another example designed in an archaic hieroglyphics-inspired style that is sure to be an eye-catching attraction!

When Isis brought Osiris back to life, they had a son – Horus – who was destined to avenge his father’s death and become the next pharaoh of Egypt. With Anubis his half-brother by his side, Horus led a victorious battle against Seth, avenged their father’s slaying, and honored the sacrifice of his mother.

This colorful and majestic tattoo is a powerful symbolism of the values of family and justice. It incorporates several Egyptian symbols such as the scarab beetle (a symbol of Ra) and the eye of Horus. If the values of this myth resonate strongly with you, then this tattoo is just what you need!

In ancient Egyptian mythology, Osiris is depicted as having green skin, a representation of his role as the pallbearer of fertility, plants, and agriculture, both during his life and after his death. As the emperor of Egypt, he taught agriculture alongside his wife Isis. After his death, Osiris was the power that sustained life from the underworld including all vegetation and the annual flood of the river Nile.

This Osiris tattoo is a mighty representation of the vital strength of Osiris. The crook and flail that Osiris is holding is the Egyptian symbol of kingship and fertility. The tattoo’s use of the full-body as a canvas as well as other Egyptian symbols and gods makes this a wholesome Egyptian tattoo that is sure to ante up anyone’s body art game. But if you have quirkier tastes, then this colorful, psychedelic Egyptian tattoo might be more suited for you.

The Sun god Ra was the great, great grandfather of Osiris. The myths of Ra, Osiris, and Horus are closely linked together. It is believed that Ra merged his eyes with Horus at some point in his life. However, when Osiris died, Horus lent him the right eye to sustain him in the realm of the dead. The myth also tells of a union between Ra and Osiris to illuminate the great beyond.

The eye of Ra is a symbol of power and light. It is one of the most powerful and common Egyptian symbols in Egyptian-themed tattoos and the perfect ink art idea for people looking for something quaint and powerful.

No article about Egyptian tattoos can end without a mention of hieroglyphs. A hieroglyph is perhaps the most commonly seen ancient Egyptian symbol. A common design in Egyptian tattoos is the sketch of an Egyptian deity as their hieroglyph or in the form of a seal. In this tattoo, we Osiris holding the ankh, and walking with his serpent on his head. He is drawn in a classic hieroglyphic style to pay homage to the Egyptian culture. Even with its simplistic style, this tattoo is a powerful portrayal of the values of life and resurrection.

If you are primarily seeking tattoos with Egyptian deities in black that are smart in their stylized design, then this Osiris Egyptian god tattoo is perfect for you. However, if you are one for color, then here is another Osiris tattoo of the same style.

King Tutankhamen was one of the most influential pharaohs of Egypt who was thought to be the personification of Osiris. Evidence of this was found when Tutankhamen’s tomb was discovered in 1922. His mummy was deliberately made to look like Osiris. For example, his skin was turned black which is a symbol of the land’s fertility.

This is perhaps the reason why King Tut and Osiris tattoos are so popular. A Tutankhamun tattoo on its own enjoys a demanded position as an Egyptian tattoo of great power. In this tattoo, we see Akhenaten and Tutankhamen drawn together with Osiris, turning into a powerful representation of ancient Egypt, its royal power, and its myths.

The Pharaohs And Osiris Tattoo

In ancient Egypt, the living Pharaoh was considered to be a personification of God Horus and upon his death, he was thought to become Osiris. This Egyptian concept of divine kingship stemmed from the myth of Osiris, Isis, and Horus.

This is the reason why several Egyptian tattoos show the royalty of Egypt along with Osiris. In this full-sleeve tattoo, we see Queen Nefertiti, Tutankhamun, and other Pharaohs along with symbols of authority, power, and legacy are combined together with Osiris to create a visually stunning tattoo with deep meanings. For anyone looking to go all out, this is it!

The Symbols Of Osiris Tattoo

In ancient Egypt, many animals were associated with the cult of Osiris. Canines are associated with the legend of the afterlife and the great beyond. More prominently, depictions of Osiris almost always show a serpent on his head. In ancient Egypt, the serpent worn on the head of the pharaoh was considered a sign of sovereignty and protection and reinforced their dominance over the land. This eclectic Osiris tattoo has a vibrant blast of colors incorporating the eye of Ra, the Eye of Horus, the ankh, the scarab beetle, and the serpent, providing a perfect mix of dazzle with symbolism.

Here is another serpent tattoo design that is a symbolic take on the serpent connection.

Ancient Egypt and its deities continue to inspire a host of tattoos which is evident from the popularity of Isis tattoo, ankh tattoo, Anubis tattoo, and Nefertiti tattoo across the world. People make their own interpretations of Osiris tattoo meaning and sometimes it’s just a consideration of beauty. We hope that these recommendations are helpful to you!

If you are into God tattoos or a goddess tattoo, then here are some more Egyptian-inspired ideas for you: