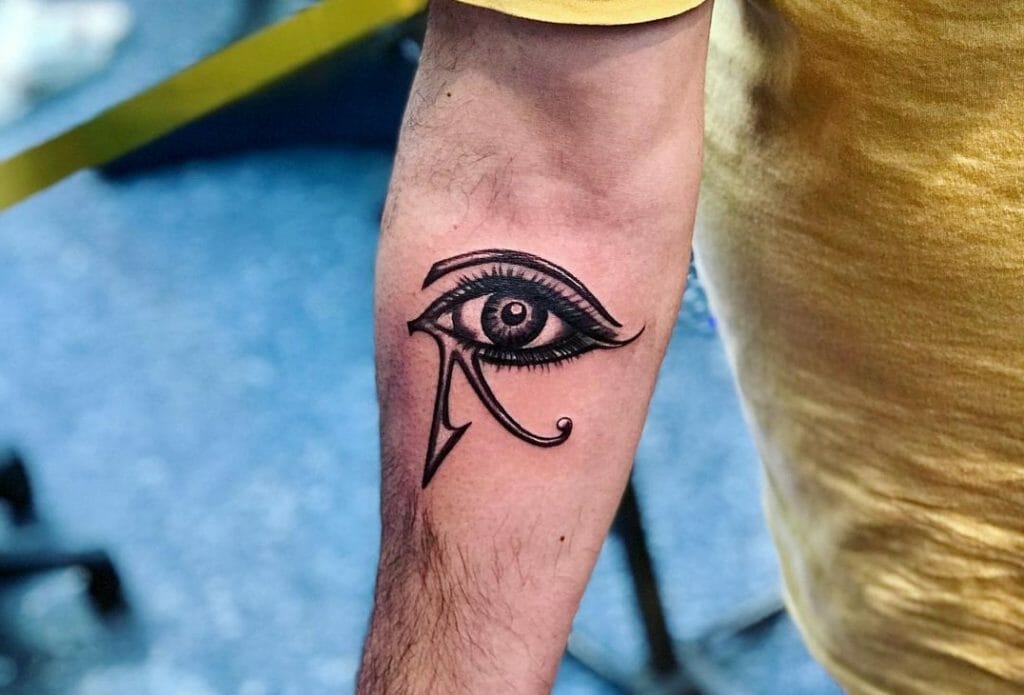 If you are into ancient mythology and want to get a powerful Egyptian tattoo full of mystic symbolism, an Eye of Horus tattoo is just what you are looking for.

If ancient Egyptian myth is to be believed, the Eye of Horus is a dominant symbol that harbours auspicious powers.

The Eye of Horus signifies healing, royal power, light, sacrifice, security, and regeneration. Presently, many believers make use of this mystic symbol to protect the mortals of this world as well as the dead from ominous powers.

Ancient Egyptian legends narrate how Set killed his brother, King Osiris, out of spite when the latter inherited all the fertile lands, leaving the former with the barren deserts. Early Egyptians believed that the body of the deceased had to remain intact, embalmed, and entombed for the spirit to enter the underworld. But Set cut his brother’s body into 14 parts and scattered them all over the deserts. But the deceased king’s wife, Isis gathered all the parts and used her magic to resurrect her husband who finally entered the netherworlds to become the judge of the deceased and the Egyptian God of Death and resurrection into eternal life. Osiris’ son, Horus, grew up and decided to take vengeance on his uncle for his father’s death. A series of violent battles ensued only for Horus to come out jubilant but lose his left eye. Different versions of how he lost his eye have been retold but the most famous one is the one in which Horus himself gouged out his eye as a sacrifice in anticipations of bringing his father back to life. Horus’ eye was restored by the Egyptian God of magic and wisdom, Thoth, or Hathor, who is the Egyptian Goddess of love and fertility.

Feathers And Eye Of Horus Tattoo

Egyptian God Horus is one of the most popular gods of ancient Egypt and is depicted as a falcon-headed man wearing the traditional double crown, called pschent, that is usually worn by early rulers of Egypt. Ancient myths describe him as the God of the sky, a falcon, whose right eye was the sun and the left eye was the moon. It is thus only apt that the Eye of Horus tattoo is coupled with bird feathers with Horus regarded as the God of the sky. The geometrical hexagonal and elliptical outlines make the tattoo design look more cool and compact only. Place this Eye of Horus tattoo on your chest to bring positive vibes to your life.

For most first-timers, getting complex and large tattoos can be quite a daunting task. Also, these elaborate tattoo designs can put a heavy dent in your savings if you are one of those who are on a tight budget. This minimalist design of the Eye of Horus tattoo can be apt for you if you fall in either of the above categories. Place this Eye of Horus tattoo on your neck or wrist where it can be spotted easily and show it off to your friends.

Eye Of Horus Tattoo Along Spine

The Eye of Horus tattoo can be a powerful symbol ripe in inspiration and mystery. It is believed that the eye represents regeneration and royal strength and has healing powers. Thus placing this Eye of Horus tattoo just below your neck, with a customised message of your choice running along the spine will be a perfect representation of your strength and one to show off to your gym buddies.

Falcon And Eye Of Horus Tattoo

As the God Horus is represented as a falcon-headed man, this spiritual Eye of Horus tattoo design coupled with a falcon is apt and a perfect tattoo for you if you are an ancient mythology buff.

The Eye of Horus tattoo can be coupled with an Egyptian Ankh tattoo, another classical tattoo ripe with heavy mythical symbolism. It is related to the idea of rebirth and eternal life as believed by early Egyptians. This spiritual hieroglyphic symbol can is also associated with the union of male and female and has been repeated in Egyptian art throughout centuries along with the Eye of Horus.

Most of the Eye of Horus tattoo designs mentioned in this list are monotonous in colour but some of you may prefer colourful tattoos instead. We have you covered with this Eye of Horus tattoo depicted in the style of contemporary street graffiti that is drawn with various vibrant ink colours.

Snake And Eye Of Ra Tattoo

Initially, both pairs of eyes were associated with Horus. But later legends tell how the right eye was eventually linked with the Egyptian Sun God, Ra. Ra was insecure that his people disrespected him and the throne and this insecurity lead him to kill a large section of humanity. Thus this Eye of Ra tattoo, coupled with a venomous serpent, perfectly demonstrates the classical legends and myths surrounding Ra.

The Egyptian Sun God, Ra, is represented in a unique way in this realistic tattoo which involves presumably a caravan of nomads riding on camels with the Great Pyramids in the backdrop. This Eye of Ra tattoo has the essence of both ancient as well as modern Egypt, portraying the desert country in an inspired manner with the combination of the present and past. This tattoo will require the best of the ability of a tattoo artist to be executed flawlessly and will require a bit of skin space with the chest being the obvious choice for it to pop up nicely.

These minimalist tattoo designs of the Eye of Ra is for those getting inked for the first time or are on a tight budget. Elaborate tattoo designs can be a difficult and expensive process and hence not feasible for those who fall in the above two categories. However, these simple and minimalist Eye of Ra tattoos are cool as well as easy to draw and hence a lot less pricey. Place these tattoos on your neck or wrist for better visibility than on your chest or shoulder.

Thorns And Eye Of Horus Tattoo

The story of betrayal that Osiris faced from his own brother and the path of vengeance chosen by his son, Horus, to avenge his father was full of thorns. Yet, Horus beat all odds to defeat his tyrannical uncle in a fierce, bloody battle and thus took revenge for his father. The stories revolving around this is what inspired artists for generations and this fantastic piece of tattoo bears testimony to that. If you wish to pay homage to these classical myths and legends, then this Eye of Horus tattoo is perfect for you. Place this tattoo on the shoulder or chest to be executed easily as the detailing demands quite a bit of space.

The Egyptian eye tattoo design ideas have been around for quite a time now as people’s interest in the great civilisation of Egypt that existed centuries ago refuses to wane. This means that the Egyptian all-seeing eye tattoo is here to stay. The Eye of Horus represents protection, good health, light, power, and all the positive vibes of the world and this ancient symbol laden with heavy metaphor and inspiration is a perfect choice for all those history buffs out there as well as common people interested in the ancient civilisation of Egypt. It is important to note that you get an experienced and professional artist for getting inked to save yourself from complications later on. Happy inking!