10 Best Military Memorial Tattoo Ideas That Will Blow Your Mind! 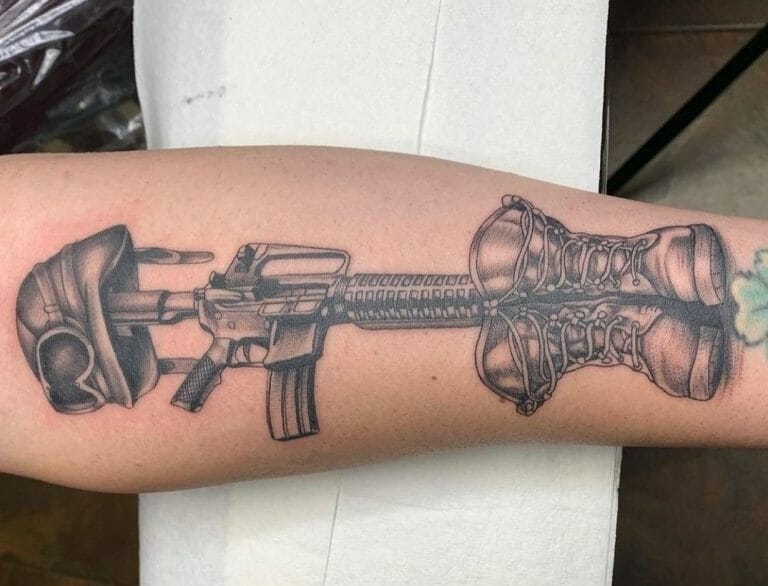 Pick your choice of memorial tattoos for military members to acknowledge your fallen comrades and their valiant struggle for the country.

The military is a nation’s first line of defence.

Commemorating the valiant protectors of our country with tattoos is quite a personal but intensely thoughtful act of showing our love and respect for these selfless patriots. If you are looking for creative inspiration for getting the memory of a deceased military etched permanently on your skin, this article might be ideal for you.

All the tattoo ideas featured here are created by artists with the utmost sensitivity and personalised to make them truly memorable for the wearer. You do not have to be a present or ex-serviceman to get any of these tattoos. All you need is a heart full of gratitude and love for your country and a creative mind.

Trench and dyke warfare, a major part of World War I, had brought the Allied Powers victory. If you would like to celebrate any of your ancestors who fought in the First World War against the Central Powers or pay a general tribute to the soldiers of this war and their valiant display of courage, this army tattoo might be a good choice for you. The use of black ink to depict the military members makes it seem like a page taken out of history books. The outline of the tattoo has been etched in blue ink, and then filled up with bluish-black tattoo ink. The detailing on the dykes, and on the soldiers is extremely realistic and will look really good on the upper arm.

Political Leaders and renowned generals from famous wars are also a burning reminder of the contribution of the national army in defending their country. Like in this instance, it was Winston Churchill who played a pivotal role in the Allies’ victory against the Axis Powers led by Hitler in World War II. Churchill, with his masterful command of the army, knowledge of warcraft and rousing speeches like “We shall fight them on the beaches”, aroused the spirit of the British soldiers who gave their all to save England from Fascism. Hence, getting your favourite war leader etched can be a worthy tribute to their contribution to a memorable war. The leader represents the people, so tattooing the war leader implies paying tribute to both the fallen comrades as well as the survivors. You can use a multicolour palette to make the tattoo seem more life-like, as in the photo, or you can stick to the traditional monochrome for a nostalgic feeling.

This uniquely beautiful and moving military tattoo features the “Cap Badge of the Corps of Royal Engineers” of the United Kingdom. The first usage of this badge can be traced to the engravings on the helmets of the battalion of the South African War at the nineteenth century’s end. Without the technical support provided by these engineers, the British army would not have become as formidable as it is today. The Royal Corps Memorial Day is celebrated on 15th September every year, to commemorate the fallen soldiers as well as engineers who had sacrificed their lives for the country. This exquisite corps badge tattoo features a garter, the motto in Latin surrounding the monarch’s initials, all etched in awe-inspiring golden. However, the tattoo artist has given a twist to this familiar symbol to make it fit for a memorial, by surrounding the badge with red poppies(for commemorating war martyrs) instead of leaves, as the original symbol usually had.

This beautiful black and brown linework tattoo features three of the military and defence forces of any country- the army, the air force and the navy, flanked by a bed of poppies. The poppy flower has had a long history of symbolic connection with the army memorial, and hence with memorial tattoos as well. In some regions, especially in the US and the UK, people wear red poppies or offer them as a keepsake for commemorating their fallen friend. A memorial army tattoo like the one featured here will hence be a thoughtful act of love and solidarity with the selfless protectors of our countries.

Dog tags are the social security numbers that are assigned to the current service members of the US army like the one you see here. You might have seen dog tags attached to the toes of the fallen soldiers when their dead bodies are brought in for identification. In this military tattoo done in black and grey contrasting shades, the dog tag has been attached to the “Star-Spangled Banner”, that is, the American flag in order to commemorate the fallen comrade’s patriotic contribution to the honour of the flag, which represents the country they have served so selflessly.

Soldier in the Battlefield Army Tattoo

There is simply no better way to commemorate your fallen comrade than by showing them in their prime- that is, on the battlefield. This military memorial tattoo, depicting a soldier standing erect in the war, his back facing the beholder, and gradually fading into a line of red poppies is intensely poignant and touching in its symbolism. If you have a fallen friend who fought as bravely as this soldier and deserves red poppies on his grave, do get this tattoo inked on your body.

An extremely poignant imagery, the folded flag is presented to the family members of a fallen fighter in war during their funeral. In this military tattoo, the folded flag is presumably wrapped around the dead soldier’s coffin, and a dog tag, probably that of the soldier’s attached to it. The tag is drawn in clear black ink lines, while the flag gradually fades into the skin, giving a beautiful shading contrast. The images of the folded flag and the tattoo are flanked by a quote that says- “Do not fear, for I am free”. A meaningful statement implying the martyr has found his true freedom by sacrificing his life for his country.

Featuring a miniature bust tattoo of a soldier on the chest, this tattoo pays a tribute to the traditional symbols that were popular with the servicemen in the armies. In the old days, army tattoos usually meant etching a soldier’s face on the body, or a military weapon. This simplistic tattoo stays faithful to that trend. With bold outlines in black and skilful shading within, the tattoo looks gorgeous on the chest. It perfectly commemorates what makes the army so valuable and cherished: its soldiers. Instead of a generic face, you can customise the tattoo by etching a dear soldier friend’s face, or their names, making it a thoughtful military memorial tattoo with names.

A multitude of army men in position with the flag of the United States of America in the backdrop, representing the unacknowledged struggle of numerous soldiers who stay hidden in anonymity. The linework, particularly on the human figures, is exquisitely detailed, to say the least, and the contrast of various shades of black is an outstanding sight to behold. Overall, this tattoo shows the army in its utmost glory, upholding their heroism and unrelenting fight to keep the US flag flying high.

Etched in visibly clean lines of black ink, this tattoo features a soldier holding ammunitions, ready to charge, while a long quote hovering over the fighter’s head saying- “in the darkest hour/ when the demons come/call on me brother/ and we will fight them together”.

This highly moving quote serves as the perfect inspiration for both the wearer and witness to understand the value of solidarity with the soldiers who have shed their blood to protect the general population from external attacks and turmoil. It urges every proud citizen of the country to stand beside their comrade-in-arms, especially when the night is the darkest and there is no hope to be found.

Loved this assortment of memorial tattoos for the army? Here are some more suggestions of army tattoos for you to honour your fallen friend: