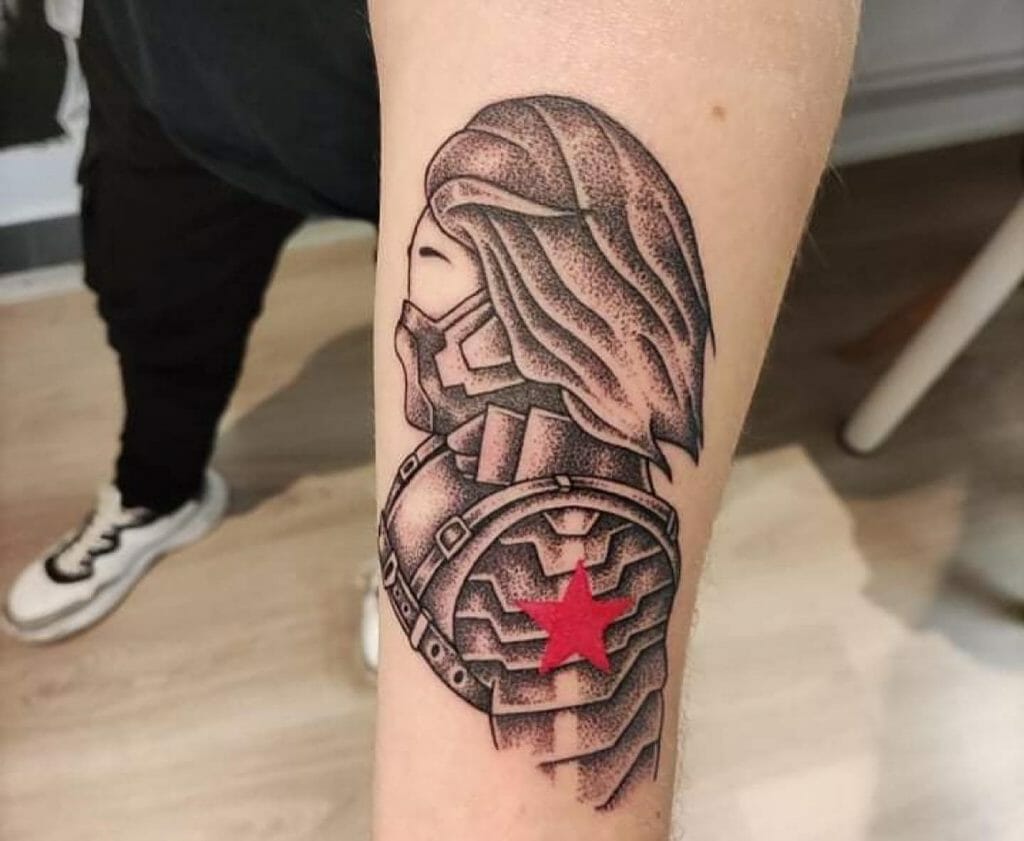 Is James ‘Bucky’ Barnes one of your favorite Marvel characters? Then you should definitely check out these awesome Winter Soldier arm tattoo ideas!

Even though he started out as a secondary, ancillary character, James ‘Bucky’ Barnes or the Winter Soldier has become a fan favorite in Marvel comics over the years.

Apart from the comics, actor Sebastian Stan’s portrayal of the tortured, tragic anti-hero has also garnered appreciation from fans and critics alike. His on-screen chemistry with Chris Evans and then Anthony Mackie’s Captain America has also been recognized as some of the best pairings in the Marvel Cinematic Universe.

James ‘Bucky’ Barnes was initially Steve Rogers’ best friend, protector and guide in the Captain America comics. However, as we see in the movie ‘Captain America: The First Avenger’ movie, he falls into the hands of H.Y.D.R.A where they turn him into a ruthless killing machine. The ‘Falcon and the Winter Soldier’ series shows how the Winter Soldier redeemed himself and become a true superhero in his own rights. Therefore, if you love the character arc of the Winter Soldier and want to get a cool Marvel tattoo, then you should definitely go and get an awesome Winter Soldier tattoo for your arm!

If you are getting a tattoo for the first time, then you should look for some small and simple tattoos with a minimalistic style. In the picture above, the wearer has chosen to get a small tattoo of Winter Soldier’s metal arm on the upper half of their arm. They have also added some flowers to the tattoo to make it a perfect tribute tattoo.

If you do not like monochromatic tattoos with just black ink and consider them to be quite dull and boring, you should go to a tattoo shop where they are experts in doing colorful tattoos. After all, a colorful tattoo will instantly make your tattoo much more bright.

Even though the Winter Soldier wears black clothes, his silver metallic arm with the red HYDRA star definitely stands out. Consequently, you can ask your tattoo artist to use multiple shades for his arm tattoo design.

Shoulder tattoos that cover your entire shoulder and may run down to your back or arm are quite big and require a lot of time, unlike small tattoos. Thus, if you are looking for a shirt sleeve tattoo or right or left upper arm tattoos, you have to be able to commit adequate time and money to it. You should also research the best tattoo shop near you where the artists can make awesome realistic tattoos.

One of the best shoulder tattoo ideas is that of the arm of the Winter Soldier. The tattoo of the robotic arm of HYDRA’s ruthless killing machine would look really cool on you. You can also choose to extend the tattoo from your left shoulder to left wrist and get the whole arm tattooed.

If you would like to cosplay Winter Soldier, the first thing you need to focus on is the metal arm. Bucky Barnes or the former Winter Soldier was missing his left arm when HYDRA captured him so they made him a new robotic arm. If you are in awe of the arm, you can also choose to get a metal arm tattoo that covers your entire arm just like Bucky.

A tattoo that covers the entire length of one’s arm is called a sleeve tattoo. The Winter Soldier metal arm tattoo would look amazing since it is also the same tattoo sleeve on the same arm. You can also add the broken Winter Soldier star for added dramatic effect in your tattoo.

Deep And Meaningful Winter Soldier Tattoos For Your Arm

If Winter Soldier or Bucky Barnes is your favorite character, then you will know how much trauma and torture he had to undergo in HYDRA’s hands. The scientists at HYDRA ensured that they had removed his feelings and emotions of love and loyalty in order to make him a trusted assassin who executed orders without asking questions.

Thus, Winter Soldier knew that unless he could get over the Winter Soldier activation phrase, he would never be able to live life normally without the fear of losing control. So if you are looking for a deep and meaningful tattoo, you can add one of Bucky’s quotes to the metal arm tattoo. In the picture above, the wearer has gotten the phrase “You are free” with their tattoo to signify when Bucky Barnes was finally out of HYDRA’s control with the help of the Dora Milaje. You can also add these quotes to Winter Soldier star’s tattoos.

The character arc of Bucky Barnes or the Winter Soldier has come a long way since the first Captain America movie. He has teamed up with other superheroes in ‘Avengers: Infinity War’ and ‘Avengers: Endgame’ to defeat Thanos as well. One particular scene that caught social media’s attention was when Rocket Raccoon really liked Winter Soldier’s metal arm and asked him if he could buy it! Even though Bucky replies that it is not for sale, Rocket decides to get it one way or another. If that scene cracked you up as well, then you can also think about getting a metal arm Winter Soldier tattoo with Rocket Raccoon!

Here are some awesome Avengers tattoo idea in case you are in the search for more Marvel tattoos.

Unlike Captain America’s costume that covered his whole body and face, the most distinct feature of the Winter Soldier’s appearance is his robotic arm. Therefore, if you are looking for an awesome tattoo for Bucky Barnes, you have to get a tattoo of the Winter Soldier’s arm as well. You can also present the latter’s mask falling in the tattoo in order to show how Bucky also existed under the garb of the ruthless HYDRA agent.

If you are looking for more fun Marvel tattoos, you can also get a Ronin tattoo or Punisher’s skull symbol drawn on your arm.

One of the coolest Marvel tattoo ideas is the Winter Soldier’s prosthetic arm covered tattoo. If you have decided that you want a Winter Soldier metal arm tattoo, you can replicate his metallic arm on your own! A Winter Soldier sleeve tattoo would make your arm look just like Bucky Barnes’ arm. If you are looking for right or left upper arm tattoos, you can also go for a half sleeve design.

If you are someone who loves detailed and complicated tattoos, then you should definitely go for a Winter Soldier arm sleeve tattoo. Winter Soldier’s arm was carefully constructed by HYDRA using metal and robotic wires so he could use the arm for maximum impact during fights. As can be seen in the picture, a Winter Soldier arm design will look amazing as long as you are willing to commit enough time and patience to the process. You can also add Captain America’s shield logo to the tattoo if you want.

A huge number of people throughout the world love Marvel tattoos because the tattoos remind them of their favorite characters. If the Winter Soldier is a favorite of yours, then go ahead and get a tattoo based on his awesome metal arm!