10 Best Army Tattoo Sleeve Ideas That Will Blow Your Mind! 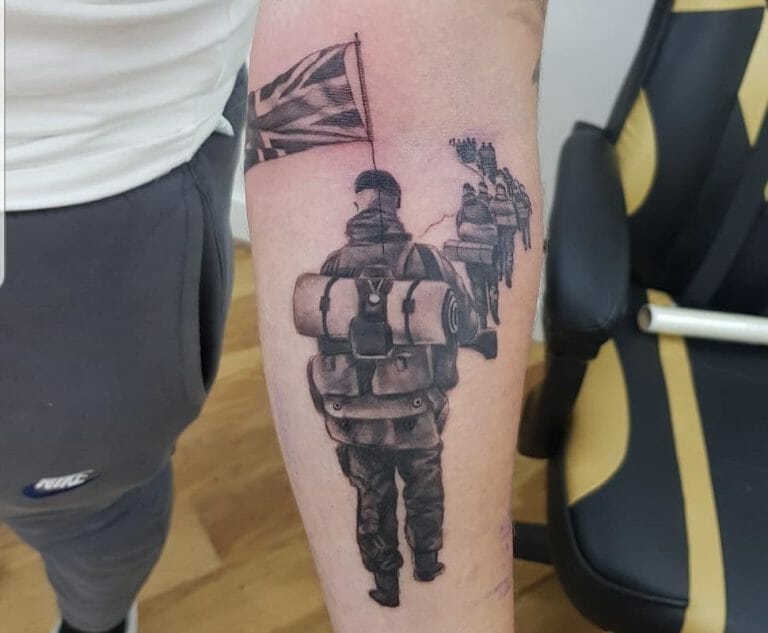 Love the army? Take a look at some of the most popular designs of Army Tattoo sleeve designs that are sure to appeal to the patriot in you.

Military Tattoos are bringing popular ideals to an art style that was formerly associated with the armed services.

In the military, numerous courageous men have sacrificed their lives to safeguard liberty and the pursuit of happiness. Their remarkable stories frequently conclude with selfless sacrifice. Not to mention the nightmares and emotions of bereavement.

Here, we have curated a list of popular and glorious-looking common emblems of the armed forces you are undoubtedly acquainted with, ranging from sailors to marines, soldiers, and airmen.

Whether you want to commemorate fallen soldiers, a family member who was a soldier, or an ex-defence soldier yourself, you are sure to appreciate these 10 beautiful and popular designs.

While military tattoos are largely popular, a little disclaimer is also necessary for those who are planning to get one. There is a difference in an army tattoo policy when it comes to different countries so it is safer to be aware of those policies and abide by those rules before one chooses to get tattooed.

With that said, you can read on and take your pick for your next body art and get your skin inked, whether it is to pay homage to your marine friend and his service to the country or just to acknowledge the brave soldiers who continue to prioritise their service selflessly, make sacrifices and protect freedom of life and liberty.

This army tattoo provides a beautiful realistic look. The artist created a realistic drawing that features a man in uniform and his front turned. It covers almost the whole back arm, including the elbow.

The artist uses a darker tone to highlight the edginess of the tattoo, including dark shades of greys and lighter shades of black that creates a sort of framed background.

However, among all these dark tones of greys and blacks, the red poppy flower stands out the most, adding to the beauty of the tattoo.

The flower holds a special meaning. Aside from its traditional links with healing, the poppy flower also pays particular homage to Remembrance Day. While some refer to it as Poppy Day, the underlying meaning of the flower is something that all men can enjoy.

Most gentlemen choose this design to commemorate and remember members of the military forces who died in service. Poppy seeds have been blossoming among ink connoisseurs since the period after World War I.

Soldiers On A Battlefield Army Tattoo

This vintage war tattoo is sure to grab your attention. Depicting a war scene, this tattoo is also created with dark shades and tones. However, rather than a realistic look, this one is a blend of sketch and realism.

Military Tattoos are popular not only because they are ideal to pay homage to fallen soldiers or army soldiers in general. They are also very picturesque when the right choices are made. Like this particular design.

It showcases a war with a soldier running towards the battlefield, complete with his combat uniform and weapons. Every detail is drawn meticulously, if you give a closer look, there are other soldiers, giving the tattoo an illusion of a zoomed picture and blurred background. Other than the military soldiers, there are also fighter planes that are part of the war mission.

The scene has a vintage touch, the uniforms from the World War Era confirms that much. If you are into elaborate tattoos as such, then this design is surely your cup of tea.

The military started wearing berets as part of military ensemble headdresses in certain European nations throughout the nineteenth century; but since the mid-twentieth century, they have been a staple of the attire of numerous military forces across the world.

Military berets are typically pulled to the right to accommodate the shoulder that carries the rifle on most troops, however military from other nations, namely in Europe, South America, and Asia, have encouraged the push to the left.

This tattoo design is unique and edgy, preferably for those who like body art that is a little on the chilling side. While this design is completely different from the usual army tattoo designs, it is still ideal to have as a sleeve tattoo.

The tattoo artist gives it a unique look by incorporating a maroon military beret into a skull. It has a realistic look and while it does not cover the entire sleeve, it is still big enough to cover a large portion of the outer bicep.

Military Tattoos are ideal for commemorating one’s own services in a military branch. This gorgeous design is ideal for just that. The poppy flowers are once again drawn here in bright red, contrasting beautifully with the otherwise dark-toned tattoo and serving as a symbol of remembrance.

There includes a warship, a warplane and a soldier, depicting all the symbols of the military world. The tattoo has been professionally etched and the sleek drawing makes the tattoo all the more stunning. This sort of sleeve tattoo is often difficult to create and consumes a long amount of time and therefore, it is important that you find a professional artist who can recreate the design just as beautifully.

This black and white piece is probably one of the most gorgeous drawings that represent both war and peace. While the hand-grenade is a symbol of the fight and the roses a symbol of peace. It is perfect to tattoo as a half-sleeve and its symbolic meaning makes it more precious.

The artist created a realistic-looking tattoo, that makes the tattoo further stand out.

If you are looking for something that has a profound meaning then this awesome creation of the war and peace tattoo will definitely serve you well.

This full-sleeve tattoo will surely appeal to those tattoo enthusiasts who prefer tattoos on the larger side. Other than that, full-sleeve tattoos are uniquely beautiful seeing as they blend with the arms as if you were wearing clothes.

When they are created with some beautiful and creative designs, it adds to the appeal of the tattoo.

The arms are always a preferable choice of tattoo especially when one is looking to tell a story with their tattoos. In this piece, starting from the top, every element of military or army and war have been incorporated.

An eagle universally represents authority and power and therefore is a significant part of the many military insignias around the world. The tattoo also incorporates fighter planes, red poppies, and soldiers holding rifles.

If you want to honour the people who have fought to the death in the past and continue protecting the nation you were born in, then this tattoo design is perfect seeing as it tells the story of the wars fought, the lives lost and the victories had in protecting liberty and freedom of life.

Other than eagle tattoos and tattoos of hand-grenades, rifles and other such symbolic objects and beings, silhouettes of soldiers are also popular tattoo designs.

They are created mostly with black ink and shaded in such a way that it looks like silhouettes and shadows. Some edges are darker-toned while others are filled in w/ a lighter shade of black.

In this tattoo, the tattoo artist creates a very unique design by framing a scene where a soldier walks with a rifle in his shoulder, flying warplanes and landing parachutes, inside the face of a soldier. This unique twist in the design will appeal to many.

The drawing was done in a very realistic, almost 3D look, giving the tattoo more vibrancy.

This beautiful piece is a custom made tattoo for those who prefer to have designs of their own choice blended with the creativity of an existing product.

The official motto of the United States Marine Corps is “Semper Fi.”It means “always faithful” in Latin. It was formally adopted as the Marine Corps motto in 1883, however, most Marines abbreviate it to “Semper Fi.”

The tattoo artist also incorporated the American Flag and the Dominican Flag, making it a custom piece. You can replace the flags with your nation′s flag and customize them to your taste.

The insignia of an eagle represents the military or the army, which can be of significance to ex-army men and can get this tattoo honouring their services to the military.

This beautifully sketched, black and white tattoo of Coast Guards is absolutely stunning and perfectly acceptable for those seeking to get a sleeve army tattoo. While body art presents a beautiful and creative opportunity to express one′s love for anything and everything including their patriotism, in colourful ink and vibrant creativity.

Most army tattoo designs are tattooed in black and white and always hold a dark undertone to their vibrancy.

The tattoo artist created a scene in the black and white sketch of coast guards holding the American Flag as the waves crash towards them. The flag of course is a representation of the nation and the soldiers, its protector.

If you want something scenic and sweet like this tattoo, then the sketched look of the tattoo will definitely appeal to you.

We are ending this collection of Army Tattoos with another realistic drawing of an Eagle and the American Flag. The drawing is done in a detailed way and has a black and white tone. The Eagle′s eyes are done in yellow which adds to the realistic look of the tattoo.

As we all know, eagles are symbolic of power and authority and therefore, this particular body art becomes more special with its significance to the military world and tattoos.

The tattoo artist also incorporated forest scenery along with the eagle and the flag. It is an ideal half-sleeve tattoo and if you want something simple yet realistically elegant for a tattoo, then this is perfect for you.

With these collections of tattoos, you are sure to find something that is sure to tickle your fancy. However, we have another short-list of army tattoo ideas that will further help you reduce your search for your perfect tattoo:

Still looking for inspiration, then checkout this tattoo sleeve ideas.