10 Best Little Bear Tattoo Ideas That Will Blow Your Mind! 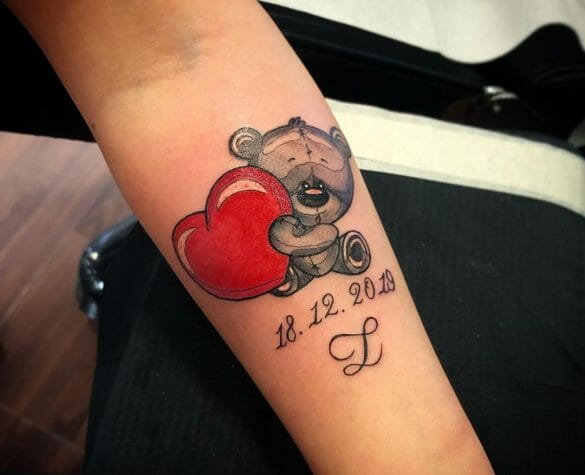 Are you searching for a cute yet wild tattoo that matches your personality? Here are some handpicked little bear tattoo ideas for y’all!

When it comes to animal tattoos bear tattoos leap into our minds instantly.

There are plenty of different species of bears in the wildlife that come in various shapes, sizes and colours. Bears can be found in almost every corner of the world.

Around the world, bears have been associated with different kinds of things. Among the younger generation, bears are popular in the form of teddy bears. A teddy bear is one of the forms of stuffed toy which is loved by every kid. In astrology, bears have a special place because there is a constellation that takes its name from bears. Ursa Major is a constellation that can be located in the northern sky. This Latin term means the greater she-bear. Besides this constellation, there is one more constellation known as Ursa minor which means the lesser bear. In many tribes or cultures bear is considered to be a spirit animal that has a lot of significance and meaning. Spiritually speaking, bear enables one to be open-minded and helps one to evolve from their old self. Bears are also associated with strength, faithfulness and wisdom. Bear tattoos add more depth to their meaning. Bear tattoos are also a symbol of friendship as in few cultures teddy bear is regarded as a mark of friendship and closeness to loved ones. Bear tattoos are also associated with courage and loyalty, these tattoos will help to bring out your personality to the people and the outer world. Down here is a list of unique and awesome little bear tattoos which has been handpicked for you guys!

Teddy bear is the friendliest and the most popular bear form which is known to everyone. Generally, popular among children in form of stuffed teddy bear toys. And if you want to relive and cherish your childhood forever, then you can get yourself inked with teddy bear tattoos.

There are many teddy bear tattoo ideas but here we have handpicked the best tattoo design for you! In this tattoo, the tattoo artist has made a yellow friendly teddy bear on the sleeve region. The teddy bear is waving one of his hands and is wearing a bow. The colour of its ear also matches the pattern of the bow that it is wearing.

A child is the closest to its mother hence mother bears are pretty much protective about their cubs. If you want to get a bear tattoo that would remind you about your mother or will have some connection with your mother, then we have this perfect big bear little bear tattoo. In this body art, we can spot two bears walking in the same direction. The mama bear is quite bigger than the little bear. There are few flower plants around them. And behind the bears, there are two incomplete circles. The cub is following the same direction as the mama bear. This cute bear tattoo is ideal for showing how much love and affection one has towards their mother.

This next bear tattoo is for cartoon lovers. ‘We Bare Bears’ is a popular cartoon show which is still airing on television on kids channels. The main characters of this cartoon show are three bears from three different species. One is Grizzly, the second one is a panda bear and the third one is a polar bear. These characters even have cute teddy bear stuffed toys available in the market. The tattoo is inked in the leg region of the body. The three bears are laying down on each other like a pile. On the top, we can spot the grizzly that has been shaded in grey ink instead of brown ink. In the middle, there is the panda and at the bottom, there is the white bear. These three cute bears are surrounded by many flowers and leaves. This is one of the cutest bear tattoos on the entire list!

Panda is the most popular and the cutest form of a bear. This endangered animal is found in the forest of China. This animal is known for its love for food and being the laziest animal. A panda tattoo is a great symbol of peace and good luck. In this tattoo, the artist has inked this animal on the wrist. This little panda is holding a bamboo, bamboo is believed to be the staple and most loved food of pandas. This tattoo is drawn in black and white ink, as these bears are black and white. In this tattoo both the ears, upper portion and two legs of this bear is covered with black ink and the remaining portions are covered with white ink.

Black bears are found in abundance in the northern continent of America. It is generally found in Canada and Alaska which is a part of the United States of America. Black bears or black bear tattoo generally symbolizes patience and confidence. So people who want to wear native American culture symbols can get themselves inked with a bear tattoo. In this tattoo, there is a baby black bear with protruding small teeth and with naughty eyes. The bear is standing on two legs and has small bear claw. The bear claw also possesses tiny nails as well. The bear is made in a dark black shade whereas the feet and the claws are made in a lighter shade.

Are you searching for cute bear tattoos? Then we have this cute Pooh tattoo for you. Winnie the Pooh is an animated teddy bear character from kids’ show. This teddy bear is a kind, friendly and soft spoken bear. Here in this tattoo, the artist has drawn behind the ears. The bear is holding onto a floating balloon much like us trying to hold onto our inner peace, isn’t it?

This realistic bear tattoo consists of a big grizzly bear with her four small baby bears. This is a forearm tattoo. The mother bear is followed by the four little bears one after another. This scene can be found in wildlife life frequently. In fact, this scene where the little ones follow their mother is very common and natural with other animals as well, since a mother is the one who provides for, cares and shelters her babies. The artist who has made the tattoo has lightly shaded the tattoo to bring the brown effect to it.

These days minimalist tattoos are becoming one of the trendiest tattoos. Minimalist tattoos are small, simple and clean tattoos that are made with black or coloured lines. So here we have added a minimalist bear tattoo design for you guys. In this design, there is a tiny and simple bear face tattoo. This tattoo doesn’t consist of any extra features but has two dots which denote the eyes of the bear, along with a nose and just below the nose there is a curvey smile. Among all bear symbols this body art stands out for its simplicity.

Polar bears are the most famous and cute bears. These bears are found in the colder region of this plant. These bears are endemic to the North Pole. They are white in colour. This bear symbolizes power, love and protection. In this tattoo, the artist has inked a scene from the book ‘Can’t You Sleep Little Bear’. In this bear tattoo, there are two bears, one is the mother bear with her tiny white cub. This cub tattoo portraits the affection between the mother and her child. Behind them, there are snow-clad mountains. We can also spot a red sun along with tiny stars in the sky. The tiny bear’s face is filled with excitement and happiness. This one tattoo can be counted in as one of the popular themes for a bear tattoo.

If bear is your spirit animal then why not get little bear tattoos to go with your nature. There can be tonnes of bear tattoo designs and ideas that we could not include in this list. Here are some more bear tattoo ideas which might allure you!