10 Best Minimalist Bear Tattoo Ideas That Will Blow Your Mind! 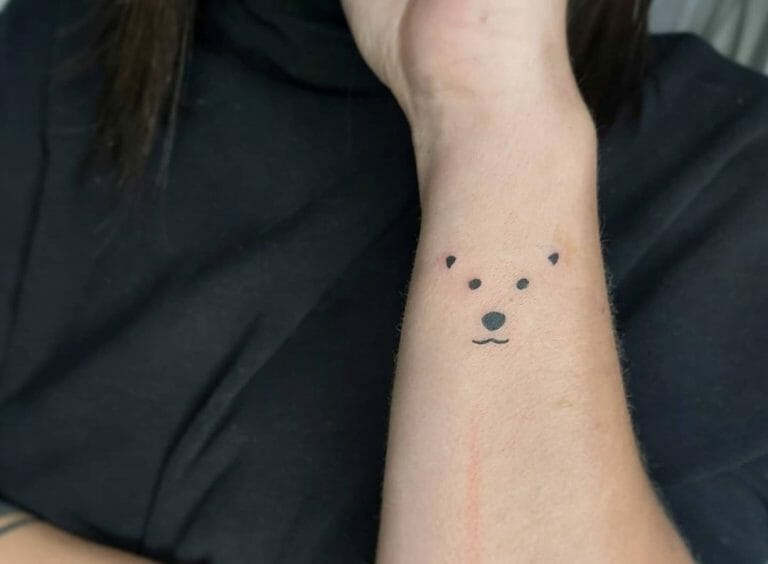 Looking for bear tattoos that are simple but creative for your skin? Here is a specially curated list of stunning minimalist bear tattoo ideas perfect for you!

Bears are carnivorous mammals mostly found in the continents of Asia, North and South America, and Europe.

Bears are, most of the time, very gentle creatures only if kept undisturbed. But under circumstances of danger, protection of cubs, or hunting for food, they can get rid of the gentle nature very quickly and turn out to be very fierce creatures.

Bears also have a lot of mythological and cultural significance all around the world. Native Americans accept bears as a symbol of rebirth, whereas many North Asian and North American cultures use bears as figures in totems. Bears have been found to be worshipped in the prehistoric era by the Chinese, Siberian and Ainu cultures, and the worship of Celtic bear Goddess named Artio has been found in Bern. Due to such cultural and mythological significance, bear tattoos are considered to be very popular, and they represent various meanings depending on the variation of bear tattoo. Variations like the polar bear tattoo, grizzly bear tattoo, bear claw tattoo or bear paw tattoo, and others symbolise courage, power, protection, anger. On the one hand, they are considered as spiritual symbols connecting god and on the other hand, variations like the teddy bear tattoo symbolise strong and loyal friendship.

So here is a list of different variations of minimalist bear tattoo designs that will be an inspiration for you to get one.

Tattoos are always meant to be creative and, if possible cute. This bear tattoo is a perfect example of both creativity and cuteness. This small minimalist bear tattoo shows a very tiny outline of a cartoonish bear wearing a strawberry leaves crown and also holding a strawberry. Although this tattoo does not represent any cultural or mythological meaning, cute bear tattoos like this are meant to look very simple, funny, and childish. So if you are a person looking for bear tattoo ideas that could portray your love for cartoonish and childish characters with a difference, then this bear tattoo design would be a great tattoo choice for you.

This bear tattoo design is small and made with very simple lines and colour shades and requires very little skin space, so places like your wrist, forearm, ankle, or collar bone could be ideal tattooing spots.

Tattoo artists are becoming crazier by the day when it comes to simple but unique tattoo art pieces. This bear tattoo has been made so unique that it is difficult to find such an idea elsewhere. The bear tattoo shows the creature wearing a full-on dress set and is also shown carrying a music box and wearing a headphone around its neck. We all have to accept the fact that the bear in the tattoo is more stylish than most of us.

The tattoo artist has maintained the minimalism in the tattoo and created the stylish creature only using black ink and simple precision-based lines. Anyone who wants a minimalist bear tattoo that shows a good sense of style can try this tattoo design out. Getting this bear tattoo on your upper arm, forearm, thighs, or your shoulders would be a perfect choice.

There are numerous new or modern styles of tattooing that have been introduced in the last few years. Geometric tattoos are one of many in the modern tattoo list. So if you are in search of a modern tattoo design of any kind of bear, may it be a polar bear or any other kind that represents power and courage, then minimalist geometric bear tattoos are a perfect choice for you.

The entire tattoo is made using fine and broad lines, which are made perfectly straight and in a geometric or angular pattern. It is not necessary to add any colours to the tattoo and, for the same reason, does not require much time to complete. The most important requirement would be for the tattooist to make very precise straight lines. The tattoo looks the best on spots like your forearm, chest, shoulder, or your waistline.

Polar bears are well known for their love for the family. These animals show their power when it comes to protecting their family, especially the cubs. So if anyone is looking for tattoo ideas for a minimalist polar bear tattoo, then this tattoo design is the best you can get on your body. This image shows the love between a papa bear and a mama bear who are hugging each other. A very minimalist but gorgeous fine line tattoo of small size, this papa bear and mama bear tattoo have been made using no colours or shades to maintain minimalism, but if you like, you can add in a very limited and soothing colour palette. Based on the size and the simplicity of this bear tattoo, you should go for areas like your forearm, upper arm, thighs, shins, hips, or shoulders.

The peeking bear’s face is one of the most iconic minimalist bear tattoos ever. This bear tattoo shows the image of a very innocent, calm looking face of a bear peeking above a line. The line in this tattoo can be made in a lot of variations, but the most common is a straight line or a stone wall. If you are looking for a bear tattoo that is tiny but looks adorable and at the same time represents the innocent nature of the animal as well as the sign of courage, then this minimalist bear tattoo is something waiting for you.

Most people create this bear tattoo on the waistline, which is actually the perfect spot, but you can also get this tattoo inked on your elbow, wrist, or collar bone. Due to the simplicity of this bear tattoo, it is mostly made only using black colour, delicate lines and minimal shades.

This sitting teddy tattoo wearing a bow tie has been made using the hand poking tattoo technique, and the tattoo involves delicate and accurately made lines and dots to make it simple-looking and is best suited on your calves, forearms, shoulders, chest or hips.

When you are looking at various options for a bear tattoo Winnie The Pooh tattoo is something that is a must on the list. Winnie the Pooh is a cartoon character well known amongst kids all around the earth. This particular tattoo shows both Winnie the Pooh and Piglet, who are the closest friends in the show, walking together while speaking to each other and leaving a foot trail behind. So anyone in search of cartoonish bear tattoo designs, or if you want a tattoo that shows true friendship, or you need a tattoo that shows your favourite show as a child, then this would be a great choice. Although this tattoo is made using very simple lines, this has been given sketchy linework, which makes it look extraordinary, especially when placed on your chest and legs. However, if not done precisely, this oh-so-simple tattoo can turn out messy.

Since Winnie the Pooh tattoos are very popular among people, there are multiple versions available for everyone to select from. This Winnie the Pooh design shows the character flying while holding onto a single balloon. The concept of minimalism has been used in its entirety to make this particular tattoo. So anyone in search of fine line tattoos of Winnie the Pooh, this bear tattoo will definitely top the list. Since only simple lines have been used to draw this tattoo, the tattooist needs to be very stable-handed and precise, or the entire design could go wrong in a matter of seconds.

Winnie the Pooh is a character symbolising loyalty, and so the friendly nature of this tattoo makes it best suitable for your chest, and the other best spot options for this Winnie the Pooh tattoo would be your calves, arms, shoulders, or hips.

This outline tattoo of a mama bear and a cub has been done using minimal black lines, dots, and shades with the constellations in the centre. Bear tattoo designs like this will also look good in negative space and also as a geometric bear. This can also be a good choice for matching bear tattoo ideas, and this tattoo will look good in most places on your body.

Because of the calm nature of the animal, pandas have become tattoo ideas that symbolise peace and serenity. So if you are looking for bear tattoo designs or animal tattoo designs that represent peace and serenity, then a panda bear tattoo would be a great choice. There are numerous bear tattoo designs available that show pandas in many ways, but this is one of the best. This tattoo depicts a panda sitting and holding a flower in its hands. The animal has been made using very precise black ink lines for the outline and complete black shading for the ears, hands, legs, and tail. A very simple and subtle colour palette has been used for the flowers the panda is holding. Such an adorable panda tattoo piece will look beautiful on your ankle, wrist, hips or even behind your ear.

There are tons of tattoo fans around the world who are creatively crazy when it comes to different variations of bear tattoos, and the above-mentioned are only a few of the many minimalist bear tattoo designs. So here is an additional list of very classy and traditional bear tattoo designs that you may also love for your skin.