101 Best Feminine Bear Tattoo Ideas That Will Blow Your Mind! 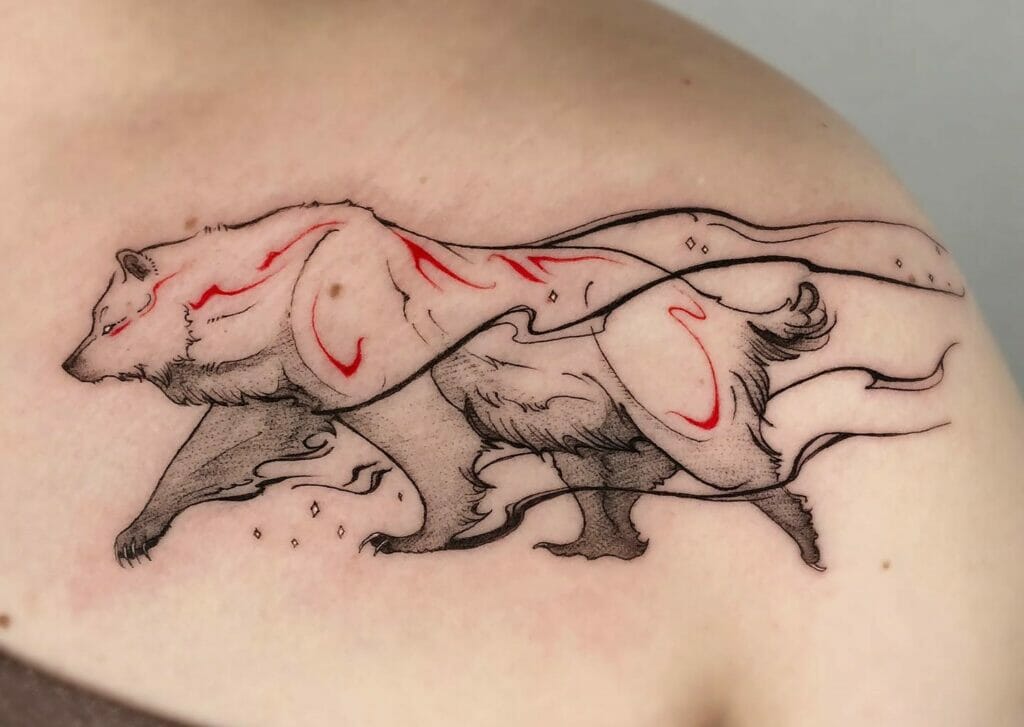 If you are fascinated with wild animal tattoo ideas, then the feminine bear tattoo is a perfect choice to quench your desire.

Found around the world in continents like North America, South America, Europe, and Asia, bears are labeled as caniforms.

Bears mostly have stocky bodies with short tails and long snouts. Though they have a stocky body, they are still extremely good climbers, runners, and swimmers.

Bears are mostly solitary animals and live in dens, especially in the winter, as they are hibernating beasts. They are mostly omnivores in nature, leaving the panda and the polar bear, who are herbivores and carnivores, respectively. The name ‘bear’ has been derived from the old English word ‘bera’, and from ancient times it has been used as symbolism to represent different things. Keeping this concept in mind, the demand for feminine bear tattoos has increased recently.

The polar bear tattoo is one of the most symbolic animal tattoos in the world. The first thing that the polar bears represent is the Arctic region and its people. It is a spirit animal tattoo that focuses on the concept of the skills and strength needed for survival in a land where life could become extremely harsh due to the unavailability of food.

People who are having or had a tough time surviving in this fast world often get polar bear tattoos. The best place to put the polar bears is on the forearm, bicep, thigh, shin back, and calves. Colorful ink is mostly used for creating this design, and objects like ice cubes, igloos, or sled carts are fused with the tattoo design.

The grizzly bear, aka the North American brown bear, is known for its speed, hunting skills, and strength. The behavior of the brown bear is quite unpredictable, and several cases of attacks on humans have been reported across the American states. People with grizzly bear tattoos often represent the concept of strength, unpredictability, and the skills needed for survival in life.

The best place to put this tattoo design is on the bicep, back, shoulder, thigh, shin, and calves. Brown or traditional black ink can be used for creating these tattoo ideas. The Native Americans believed the bear to be the spirit animal that guided their warriors in the afterlife and thus can also be inked as a Native American symbol tattoo.

Mama bears are intensely protective of their young ones and can go to any extent to save them. This animalistic behavior of protecting their young ones is even seen in humans, which is why some mothers even proudly call themselves ‘Momma bear.’ These female tattoos reflect the strong bond a mother shares with their children and the strength of motherhood.

The best place to put this feminine mama bear tattoo is on the bicep, chest, back, thigh, shin, and calves. These bear tattoo designs can be either done using traditional black ink or colorful ink, depending on the tattooer. Flowers and leaves are often infused in this design to make it more meaningful and beautiful.

The teddy bear tattoos are extremely nostalgia-laden tattoos and bring back memories of sweet childhood. People who were blessed with a great childhood full of love, companionship, and security, often get teddy bears inked on their skin. The best place to put this design is on the chest, shoulder, back, side belly, thigh, wrist, ankle, and forearm.

The size and color of the tattoo totally depend on the tattooer, and objects like a heart sign, nicknames, or toys are often found etched with this tattoo design. People with a rough childhood can also get the teddy bear tattoo, but in that case, the teddy bear is mostly roughed up and torn.

From inking a gummy bear to a teddy, tiny tattoo designs are both cute and adorable. The best place to incorporate this tattoo is on the finger, ankle, wrist, shoulder, neck, and behind the ear. Following the concept of less is more, these tiny tattoos are done using minimal usage of shading or stippling.

Bear claws are probably one of the coolest tattoo designs one can own on their body. Bears are known for their strength and often leave paw marks in the area they have passed through. As they move from one place to another in search of food, the bear paw tattoo symbolizes the concept of moving forward in life, and for this reason, many people get inked with this design.

In the Native American culture, bear claw symbols were drawn on the totemic poles, and bear claws represented maternity, strength, and healing. People who have an interest in Native American culture or want to pay respect to their roots often get this tattoo done on their bodies. The best place to put this bear claw tattoo is on the side belly, shoulder, forearm, wrist, bicep, back, and ankle. Traditional black ink or colorful ink can be used for creating this design.

Panda tattoos are considered to be one of the cutest bear tattoo designs around the world. The pandas are the most adorable animals with a fun-loving attitude, and these bears symbolize calmness, strength, peace, and good luck. The best place to put these bear tattoo designs is on the forearm, wrist, shoulder, foot, finger, back, and thigh.

The white and black colors of the panda are often associated with the concept of the yin yang symbol, which represents the duality of life. Tattoo lovers can pick any meaning out of so many to get inked with this beautiful tattoo idea. Bamboo trees are often added to this tattoo design to make the art more meaningful.

The Himalayan black bears are found in different parts of Asia and have great importance in Asian mythology. In Chinese culture, bear worship was present, while the Japanese believed in Onikuma, a bear-like creature with supernatural powers who fed on livestock by stealing them from villages. Koreans believed bears to be the carriers of the spirit of their forefathers.

Himalayan black bear tattoo resonates with a variety of meanings, and it totally depends on the tattooer which meaning they want to reflect with this tattoo design. The ideal place to ink this tattoo is on the shin, back, thigh, shoulder, bicep, and calves. Black and brown ink is mostly used for creating this design.

The tribal bear tattoos, along with bear claws, hold deep symbolic meaning. Many tribes worshipped bears for their strength, tenacity, and courage. The Native Americans painted bear paws on their totems and also believed the bear to be the spirit animal that would guide warriors in their afterlife. Gentleness, maternity, and healing are also some of the characteristics associated with a tribal bear.

For people who have leaned toward tribal tattoo ideas, the bear tattoo is a popular choice among them and for the right reasons. The best place to put the bear tattoo design is on the shoulder, bicep, back, calves, shin, and neck. Traditional black ink is mostly used for creating this tattoo, and tribal patterns are used to ornate the design.

People often get cartoon or comic characters inked on their bodies. Winnie the Pooh is an animated character who is quite popular and often tattooed as a cartoon bear by tattoo lovers. With this tattoo, the tattooer represents the concept of childhood, love, and friendship. Where other bear tattoos show strength and courage, Winnie tattoos often represent bears’ goofs and childish nature.

The ideal place to put this tattoo is on the forearm, shin, thigh, calves, foot, ankle, and wrist. Colorful ink is used for creating this tattoo design, and a honey jar is added to make the tattoo look adorable. People who love this comic or cartoon character can also get the Winnie tattoo done to revisit their childhood by looking at this design.

Bear symbols and bear tattoo meanings can vary from culture to culture, but the characteristics and ideals shown by these majestic animals are noteworthy.

The other tattoos that can be done using the feminine bear tattoo designs are:

What is a feminine bear tattoo?

A feminine bear tattoo is a design that features a bear, usually either a grizzly or black bear, with elements of femininity. These tattoos often feature stylized versions of the animal with delicate details like flowers, bows, and ribbons. They may also include other symbols associated with femininity such as hearts, stars or butterflies. Feminine bear tattoos can be used to represent strength, courage, and resilience as well as a sense of beauty and grace. Feminine bear tattoos are a popular choice for women looking to get an animal-inspired design with an added touch of femininity.

How do I choose a design for my feminine bear tattoo?

When choosing a design for your feminine bear tattoo, it is important to consider the symbolism and meaning behind the animal. Consider what traits or qualities you want to represent with your tattoo, such as strength, courage, or beauty. You can also choose a design that reflects your personal style, such as a more abstract or minimalist approach. Think about the size and placement of the tattoo, as well as any colors or patterns you would like to include. Lastly, make sure that the design is meaningful to you and reflects who you are. With a bit of creativity and research, you can find a design that captures your personal style while still being meaningful.

What are some of the best feminine bear tattoo designs?

There are many great feminine bear tattoo designs to choose from. Some popular designs include a bear with wings or antlers, a sleeping bear surrounded by flowers, and a bear with mandala elements. Other popular design choices include a mother and cubs, two bears facing each other, or even a stylized abstract version of the animal. There are also many artistic interpretations of the bear, such as a watercolor or geometric design. Choose a design that reflects your individual style and resonates with you emotionally. With so many possibilities, there is sure to be a perfect feminine bear tattoo for everyone!

How much does a feminine bear tattoo cost?

The cost of a feminine bear tattoo will depend on several factors, including the size and complexity of the design, the skill level of the artist, and where you are getting the tattoo. On average, a small to medium-sized bear tattoo can range from $50 to $200. For larger or more complex designs, however, prices may start at $150 and go up to $500 or more. Prices may also vary depending on the location of the tattoo parlor and their individual pricing structure. It is best to do some research on local studios and speak with professional artists to get an accurate estimate of the cost of your tattoo.