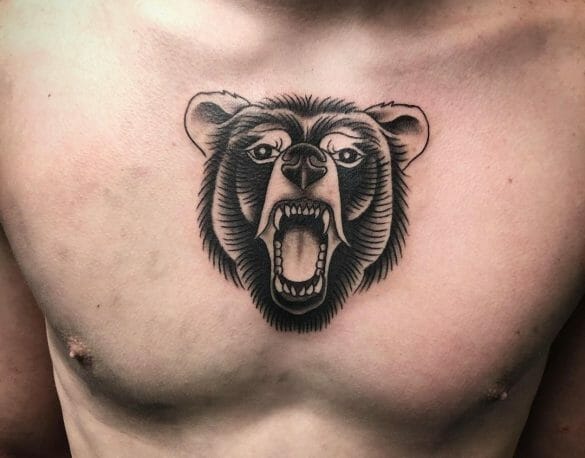 If you are in search of the best American traditional bear tattoos, here is a list of some amazing masterpieces to help you re-define your personality!

Apart from being the carnivorous mammals of the Ursidae family, bears have secured vital significance in different cultures also.

Endowed with tremendous physical strength, bears are often worshipped as a religious practice across cultures. So it’s inevitable that there will be a growing craze for the tattoos of this beastly and royal animal.

Not only are bears distinguished for their strength, but it is also the wisdom of the animal that makes them stand out. In Norse mythology, it is believed that Odin and Thor, the Norse Gods, took the shape of bears as their preferred disguise to visit the living world. In Norse mythology, bears are associated with robustness, sagacity, and wisdom. In the bear folklore, Artaois is the bear god while Artio is the bear goddess. Artois is often connected with the legendary warrior, King Arthur for his strength. In the Indian epic tradition, Jambavana is regarded as the king of bears. Across the American native culture, bears have varied symbolism. They believe that bears symbolize leadership, courage, authority, strength, and are often linked with the powers of alleviating and protecting.

So, when such myriad symbolisms, myths, and legends have to be incorporated in a tattoo, you can well imagine the grandeur that you will carry once you treat yourself with a bear tattoo. It won’t matter a bit if it’s your first American bear tattoo or an add-on to your already existing collection as these tattoo designs will undoubtedly outshine all. So what are you waiting for? Just scroll down a bit and you will get the best American traditional bear tattoos to add an extra edge to your personality!

Observing the rules of the American traditional tattoos, this tattoo design uses minimalistic colour, black shades, and thick black outlines. The red colour detailing adds extra vigour to this tattoo. Best suited for men, this roaring bear’s face tattoo with precisely edged canines and well-defined paws, will polish up your everyday look. Pulsating with life and grandeur, this tattoo is a must-have if you want to flaunt your boldness and indomitable spirit.

Also known as brown bear, Grizzly bears are stuffed with symbolism in the American culture. The otherwise silent and calm looking animal in the tattoo is capable of great ferocity when faced with any threat or attack. Thus, grizzly bear or brown bear tattoos stand for bravery, ferocity, affection, power, protectiveness. The simple black outlines with geometrical patterns have perfectly portrayed the calmness as well as the underlying strength of grizzly bears in this tattoo. When animal designs are becoming a trend, this unembellished tattoo will effortlessly gear up your confidence and if you want to equip yourself with the prowess of this majestic animal, get one inked for yourself without any delay!

This realistic bear tattoo can top the list of your favourite American bear tattoos if you are planning to make your arm look stunning. This lively bear tattoo embellished with energy and life can keep you glued to the screen for hours if you are a tattoo lover. The roaring bear in the tattoo with its well defined sharp claws and teeth is glowing with intense energy and courage. The black fur with touches of red adds more depth to the tattoo design. As this bear tattoo is vertically lengthy, it will look incredible on the upper arm and forearm as well as on the crus and the calf muscle area. If you want the vitality and power of this animal, don’t delay! Hurry and make this unbelievable masterpiece your next tattoo design.

Looking for a breathtaking and artistic American traditional bear paw tattoo? This is a perfect bear paw mandala tattoo with all the intricate detailing done with utmost care. This unique design of the bear tattoo is a perfect combination of artistic beauty and beastly wildness. The vibrant flower design at the center heightens the aesthetic effect of the tattoo. This skillfully crafted paw tattoo employs various geometric shapes with minimal shades, giving a black tattoo design. Unlike most bear tattoo designs, this bear tattoo is suitable both for men and women. So just decide the space of your body where you would love to have this subtly wild but beautiful design and you are ready for this astounding bear paw tattoo!

The white polar bear is a symbol of purity for the native Americans. They are believed to be proficient hunters and some native American tribes believed that they taught man this savage game of hunting. Like all other bears, the polar bears, dominating the frozen landscape, are courageous beast. This bear tattoo featuring a polar bear and a penguin is cute and catchy. You will almost get a teddy bear-like vibe from this tattoo. This tattoo is no doubt a symbol of love and bonding which is an inherent quality of the strong-willed animal, surviving the barren ice-covered plains of the earth. This mini-sized black and white tattoo with slight shading is a great choice to add an extra twinkle to your everyday look. Best suited for women, it is a convenient choice for anyone who is a nature lover and wants an adorable American bear tattoo. The small size of the tattoo makes it ideal for any part of t

Be it some occasion or a religious ritual, flowers have always been the focal point and be it a forest or a tattoo design, bears occupy the throne. When the deadly spirit of the bear combines with delicate floral art design, it certainly takes the shape of a tattoo that would make you feel closer to nature and wildlife. The thick black outlines of the whole tattoo make even the smallest detail in the tattoo design captivating. While the floral design of the tattoo tones down the wild ferocity of the animal, the roaring bear with long black fur lends a classic look to the tattoo. The perfect place to ink this tattoo would be the arm. Get one inked from your nearest tattoo parlour and you would fall in love with the royal look every time you step in front of the mirror.

Black bears are medium-sized North American bears and are known as symbols of patience and confidence. This black bear tattoo in a sitting posture with its clever eyes pointed at you is engaging. This bear tattoo with vibrant yellow flowers can freshen up your day with its cuteness and life-like vitality. This design would require a skilled tattoo artist as the black fur coat of the bear as well as the bear’s expression needs perfection for the tattoo to achieve its true aesthetic effect. The orange hue and the painted flowers, offer supplementary refinement to the black hue of the tattoo design. Keeping in mind the size of the tattoo, the perfect place to get this cuteness inked would be the upper back area of the body and the shoulder blade.

Looking for an outward manifestation of your dauntless courage? Here’s a deadly American killer bear tattoo to give you an invincible look! This black and grey bear tattoo has the ability to boost your pride, courage and self-esteem. Since American tattoos depend largely on black outlines with nominal colour usage, these carefully drawn lines are the essential tool for highlighting and presenting the myriad hues of the tattoo. The bold black strokes in the whole art give an untamable aspect to the bear tattoo. If you are strong-willed, fearless like this bear, then this particular bear tattoo is what your biceps currently need to look absolutely magnificent.

Bears are a dominant symbol in American native culture. This tribal bear tattoo using only black colour and bold strokes has a regal beauty. The feathered crown on the bear’s head has a dignified resemblance to the headgears worn by various tribal populations. The feather design would demand a veteran tattoo artist to depict the mighty stature of the bear tattoo. This tribal bear tattoo can be your choice if you are interested to try out some tribal look or if you seek to honour the beliefs associated with the native American culture.

The world has always attached violence, toughness with bears. But Winnie the Pooh, a Disney character has deconstructed the ferocity of the American traditional bear tattoos with its overloaded cuteness. Right from our childhood, we are acquainted with this loveable, cute, innocent-faced pooh bear who offered happy escapes to our wonderlands. Suitable for all bear tattoo lovers, this super adorable tiny tattoo has the power to carry you back in time. This simple tattoo with pooh hanging from a balloon and has its own unique charm. The size and colour of this bear tattoo can be altered according to one’s preference. If you are not a fan of the American violent grizzly bear tattoos, then this cute bear tattoo is particularly designed for you!

A bear stands for great strength, power and all these incredible bear tattoos will uphold all your inner qualities that are bold, unbeatable and worthy of pride. American bear tattoo is a must-have if you are a devoted lover of white garments, as the black eye-catching design of the bear tattoo will then shine out in its brightest possible shade. Getting yourself inked with a bear tattoo definitely means adorning yourself with all the strength, positivity and energy that a bear represents.

Wait, the unbelievable tattoo list doesn’t end here! We have a list of other designs of the native American bear tattoo which you can also check out: