10 Best Killua Tattoo Ideas You Have To See To Believe! 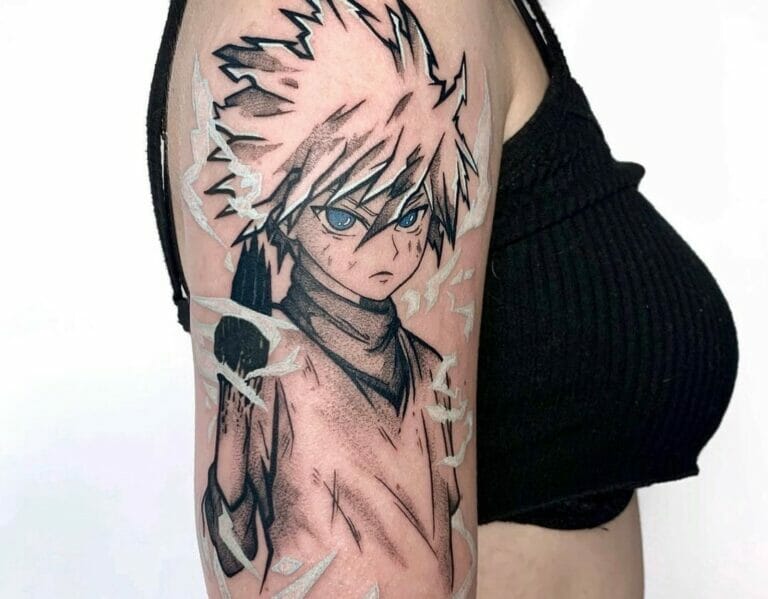 If you love the anime series Hunter x Hunter and looking for a tattoo that screams “I’M IN LOVE WITH KILLUA ZOLDYCK”, you are exactly where you’re meant to be.

Killua Zoldyck is one of the central characters in the popular anime series Hunter x Hunter. Spiky silver hair, almost translucent skin, and blue eyes, this cute little ex-assassin with his Godspeed powers, is ruling the hearts of millions of Otakus in the world.

Killua first appears in the series during the Hunter exams’ first phase when he meets his new best friend, Gon Freecss. These two little cuties vibe the moment they meet and thus start a journey of one of the best friendship bonds in anime, so far. Although initially, Killua comes across as cheerful and cheeky like Freecss, he, however, lacks Freecss’s politeness. At first glance, you might have thought Killua to be a normal, cute, 12-year-old child who loves chocolates, but we warn you not to fall for that trap. As the series progress, we find out how Killua is one of the smartest and most powerful characters who would tear your heart out in just a second and you wouldn’t even notice. Belonging to an assassin family, he possesses the power of ‘Nen’, Godspeed, that allows his aura to create electricity which also makes him as fast as light. While attacking enemies, Killua uses Godspeed to generate electricity on his hand and electrocutes them by contact that leaves his enemies paralyzed or even burns them up. Despite his incredible speed and power, we also gradually find out that this babe also has insecurities when it comes to fighting enemies that are more powerful than himself. Killua would often find himself fleeing away rather than facing situations like this. This was majorly an impact of his training during childhood, which he later finds out that he had a needle implanted into his brain that forced him to retreat each time he find someone more powerful. Killua, after getting rid of this needle, gained full confidence and power over his consciousness that made him even stronger. However, it’s not just his power and looks that mesmerized fans but also his incredible character development that we witness throughout the series. Hunter x Hunter has been a popular theme for tattoo art among Otakus ever since the series came out and they are so cool, we can’t seem to get over it. If you’re a fan of this lightning sweetheart and decided to get your love inked, we are here to provide you with the coolest Hunter x Hunter Killua tattoo inspirations ever, just for you.

Is there a better tattoo to show your love for this show other than getting a Gon and Killua tattoo like this one? We bet not. What we love the most about this tattoo is the clean and crisp lines along with the concept. This tattoo is the visual representation of what Killua once told his Hunter best friend, “Gon, you are light. But sometimes you shine so brightly, I must look away… Even so, is it still okay if I stay at your side?” Gon has been portrayed alongside the sun, symbolising his positive and warm personality, while Killua on the other hand, has been portrayed alongside the moon and stars in the night sky that symbolises his shining yet cold personality. Killua is a sweet boy, who has had a rough childhood. In an age when a child is meant to be playing and living their life, Killua went through harsh assassin training for the honor of his family. You can ink this tattoo on your forearm and let them show the world your appreciation for this cutest duo in the history of anime.

Killua’s Godspeed is the most powerful Nen that has ever existed. Nen is a technique that allows a user to create and manipulate their aura. The type of Nen that Killua possesses is transmutation which allows him to copy the properties of anything he wants and but developing his power, Killua now has also learned to manipulate electricity. His Nen is so powerful that Killua has also used it successfully with another powerful group named Phantom Troupe. Style an electric tattoo like this so that no enemy can even stand a chance in from of you or maybe get this just for fun because we bet no one can ever deny his Nen’s coolness.

If you’ve watched Demon Slayer and absolutely adore the cute brother-sister bond that Tanjiro and Nezuko share, we present you with a similar sibling bond that is featured in Hunter x Hunter, Alluka, and Killua. Killua runs away from his home to become a hunter along with Alluka. Tanjiro-Nezuko and Killua-Alluka kinda have striking similarities. For instance, Nezuko never has any powers neither was she strong enough to ever even think of facing a demon until she was turned into one. Similarly, even Alluka, although born into an assassin family, was powerless and did not possess Nen, unlike her family. However, she is arguably the most powerful among Zoldyck’s family members. Alluka, just like Nezuko loves and obeys her brother and is ready to sacrifice herself just for Killua. If you’re in awe of these adorable siblings, please do add this amazing tattoo to your wishlist.

Can this tattoo be any cuter? We think not. This tattoo features our skater boy with crisp outlines keeping the tattoo clean and minimalistic. If you want to opt for a minimal tattoo like this make sure you find a tattoo artist who has experience in handling intrinsic details like this one right here because the beauty in minimal tattoos shines only through their clean and perfect edges.

Get a tattoo of these two partners in crime when they max out their own powers. These two best friends have been shown with remarkable character development as the show progresses and that happens to be one of the best parts of the show. We love how Killua and Gon have been designed alongside each other backed up by their maxed-out self.

If you are rather more interested in minimal tattoos, this one is for you. Minimal tattoos are a great option for people who are not that into complicated designs and want small and clean lines for their ink art. If you choose to go for a minimalist Killua tattoo, you can definitely ink this pretty boy onto your arm in any way and size you want and we bet you’ll never be able to keep your eyes off of your arms anymore. In any case, you’re not the commitment type, you can also check out online stores as well, and order yourself temporary sticker tattoos on various sites.

Two of the most loved characters from the series, Hisoka and Killua, are in one frame. Now isn’t that an incredible sight? Both Hisoka and Illumi share the same Nen type – Transmutation, which allows Hisoka to manipulate his aura and uses the properties of rubber and gum. Hisoka during an encounter with Illumi, Killua’s brother, asks if he can kill Killua to which Illumi replies that he’ll be killed right here if he even thinks of it. On that note, if these two contrastive yet similar characters are your favorite from Hunter x Hunter, you can place a tattoo anywhere of your choice and it will still not fail to catch everyone’s eyes.

We have all witnessed the foodie in Killua and know how much of a big sweet tooth he has got. He purchases his snacks with all the money he has and would never regret it. Back when he was in Heavens Arena, Killua had spent around 200 million in just buying snacks within 4 years. If you relate to Killua’s foodie side, ink this tattoo and befriend a new foodie pal to go with for all your next food ventures.

Okay, we’re just gonna to be honest here and say that books are better than movies. Always. And if you’ve read the manga and want the touch of the manga feels in your tattoo, we would highly recommend this tattoo. Get this manga cutout on your arms or forearm and we promise no one will be able to get their eyes off your tattoo. This tattoo has the classic manga touch for the bookworm in you. You can additionally also mix it up with any sign and quote of your choice. Check out these Killua quote suggestions that we highly recommend:

“If I ignore a friend I have the ability to help, wouldn’t I be betraying him?”

“You don’t need to thank friends.”

“I’m so tired of killing. I just want to be a kid. Hanging out, doing stuff with Gon. That’s it.” (Poor Killua)

Last, but not least, is Killua with his weapon of choice, yo-yos, which weighs 50 kilograms (110 pounds). get your tattoo with the famous yo-yos. You can also optionally choose to colour the device navy blue with either a hexagram or a pentagram on it.

We hope, you must have found your next tattoo design to ink on yourself from all the inspirational tattoo pieces that we gathered here just for you. Killua is one of the coolest and most powerful kids ever created in the history of anime and we absolutely adore him and only if we could, would have surely adopted him. If you want to find more inspirations, you can also find them on Insta by using hashtags #killuatattoo, which has a lot more options for you to choose from. We can’t wait for you to determine the perfect fit for yourself and get it inked onto you to have the world turn all their attention to our cute little silver-haired thunder. Check out our suggestions if you want to learn more about Hunter x Hunter tattoos: