101 Best Antler Tattoo Ideas You’ll Have To See To Believe! 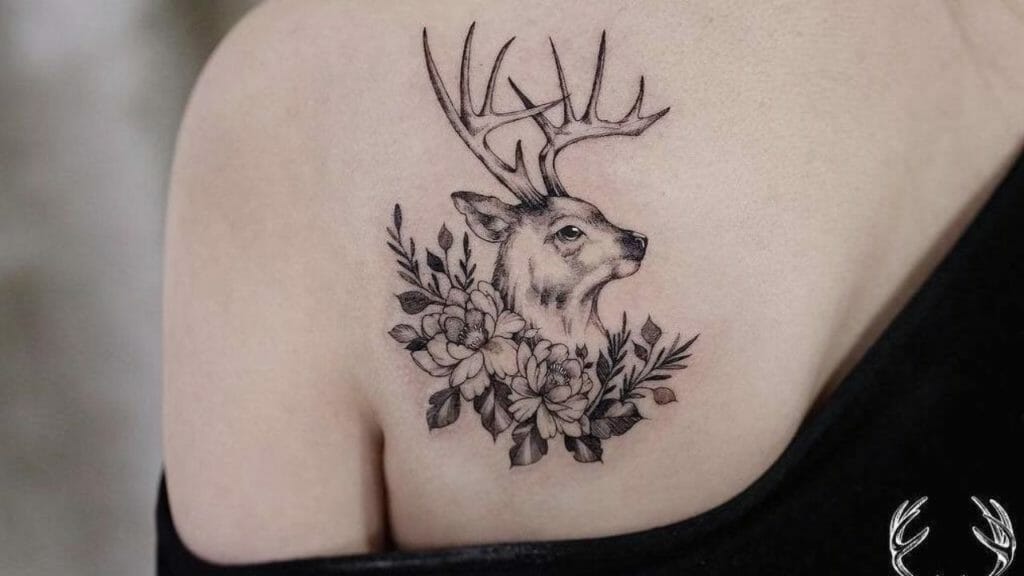 Craving to get inked but confused about the tattoo designs? Here is a list of antler tattoo ideas and that will leave a mark (pun intended)!

The deer, like many animals, carries archetypical or deep symbolic meanings within the realm of cosmogonies, myths, and legends.

The followers of Christ look upon the animal as some sort of sacred creature, symbolizing virtues such as piety and devotion, and the legend of Saint Eustace bears testimony to this faith. The Buddhists consider the deer to be a symbolism of gentleness, kindness, and spirituality.

The North American native tribes, the Cherokees, associate the deer with fertility and consider the animal as a messenger of some Goddess and a totem signifying intuition and sensitivity. The Celtic tradition considers that the deer has two aspects: male and female. The male part bears the symbolism of pride, purification, and independence, while the female counterpart represents gentles, femininity, and grace. The Wixaritarie tribe of Central Mexico considers the deer as a divine creature that translates the language of the Gods for men.

All in all, the deer antlers carry a deep spiritual symbolism across different cultures and are a great idea for a tattoo design if you are looking to showcase your faith as well as your love for mythology and legends. The deer antler tattoos are a unique design becoming immensely popular for people all across all genders who want to showcase their sense of fashion and persona. Here is a specially curated list of a wide type of antler tattoo designs – deer antler tattoos and others – you can choose from according to your personality.

For many, simple antler tattoos are not enough. They look for more exquisite ideas with intrinsic designs that match their taste. They can go for this lavender entangled antler tattoo that looks unique and as well as carries deep meanings. Lavender flowers are associated with silence, grace, devotion, calmness, purity, and serenity, while deer antlers carry a spiritual symbolism of pride. Thus, an antler tattoo with lavender branches will show your love for nature and highlight your spiritual side, setting you apart from the general crowd.

The moose is an animal that personifies grace and represents strength, adaptation, and wisdom. It also embodies self-esteem and independence. Coupled with a Pignut Hickory nut, this certain antler tattoo design lends a certain classic touch to your sense of fashion and also portrays your inner strength and grace.

The Elk Antler Tattoo For First-Timers

If you are going to get inked for the first time, we advise you to go for simple designs. A simple tattoo like this is perfect for first-timers. Elks are usually related to stamina, pride, agility, and strength. This elk tattoo will look great if you have it on your arm – flexing the muscles and showing it off to your gym buddies.

The Hook And Antler Tattoo

Minimalistic tattoos are a great way to get inked for the first time and are a popular trend in the world of tattoos. If you love the high seas and sailor life, a hook tattoo coupled with a deer antler is your best bet. The hook is a sign of prosperity and abundance and this tattoo will set you apart from your lot of friends who also got inked.

The deer antler has attained a figure of spiritual superiority following many cultures. The antlers are like a crown, growing beyond the body and guiding it closer to heaven, making it pious. This highly detailed antler tattoo is not for people looking for simple antler tattoos as it is highly detailed and needs a lot of skin surface area to be executed perfectly.

Looking to get something goth to match your style? This black antler tattoo with moth and candle will be perfect to match your gothic Halloween vibes! While the candle is usually attached with holy illumination of the spirit of truth and life, the moth is a sign of death. Coupled with the spiritual black antlers, this tattoo is all you need to spook your gang.

Half Owl Half Stag Antler Tattoo For Harry Potter Followers

The stag was a recurring Patronus used by Harry Potter as well as his parents, James and Lily, which led Harry to the Sword of Gryffindor. James Potter could also take the form of a stag as an Animagus. The owl is also a creature that features throughout the HP universe as a form of communication and as pets, with Harry’s snow owl Hedwig attaining cult status. So this antler tattoo might be an important addition to the Harry Potter fan inventory for the followers of the teen wizard.

Are you an ardent fan of films that run a chill down the spine and want to get a tattoo to reflect that part of your personality? These kinds of skeleton deer antler tattoos are the right idea for every horror fan out there. Go for these ink designs to complement your love for horror flicks and give your whole look a new twist.

Wanting to get a dark-themed tattoo? No worries, we got you covered with this deer skull with antlers and flowers tattoo. The skull will appease your darker side while the flowers will appeal to the nature-loving side of you. These kinds of conflicting designs will be a new way for you to showcasing your complicated personality, setting you apart from other people.

Wanting to add a rustic aspect to your persona? You can opt for this antler tattoo coupled with a timepiece. The timepiece is a classic choice with the antlers making it chic and groovy. The vivid colours and intrinsic design of the tattoo will be something every person you meet wants to get the same.

Deer antler tattoos have been a new trend in the tattoo industry and going by its popularity and it is here to stay for some time in the near future. You should be careful to choose the proper type of deer tattoos with antlers as well as other things to go with that will complement your personality. You should be careful about the tattoo you choose and comfortable with what it signifies and see that it is in accordance with what you love.