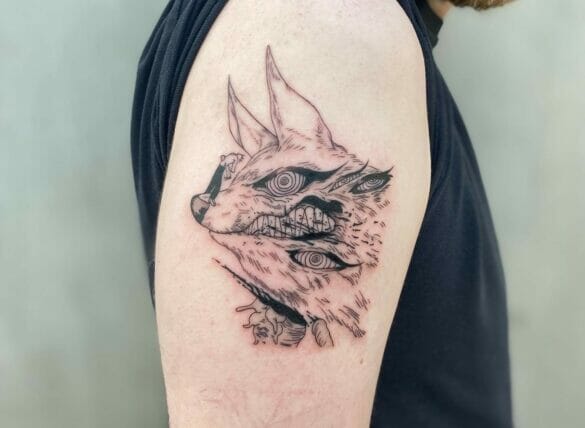 Anime isn’t just a cartoon, it has become a part of pop culture. Today there are anime-inspired looks, series, and tattoos. In case you grew up watching anime or you just love anime and if you also like tattoos, you are right where you need to be. Because we are bringing you Cool Anime Tattoos You Will Love!

Probably one of the most popular anime series is Death Note. In case you liked this show, then why not do one of the characters as your anime tattoos? Ryuk makes a great sleeve anime tattoo design because of its cool lines and facial structure. Ryuk is a Shinigami that is considered to be the God of death in Japanese culture.

If you aren’t afraid of going all out with your Japanese anime tattoos then maybe you should try this Sailor Moon tattoo design. It can be done as a thigh tattoo or an arm tattoo. You can do the characters and turn your tattoos into body art by adding color to it.

Anime tattoo ideas can be free-spirited because of so many tattoo designs out there. Naruto anime tattoos like this one can be done in all black ink or you can add some color for the details. Be aware that these tattoos take a long time to do and the pain level is there.

Anime tattoos can look beautiful, original and awesome all in one. The great thing about them is that true fans will recognize your super amazing anime tattoo, while other people may just like the tattoo designs. Like most anime tattoos, this one can also be done on your thigh, back, leg, arms. The tattoo ideas are that it is done in a lot of colors so it can be turned into body art.

This anime tattoo may not be specifically related to an anime series or an anime character, but it sure does have a lot to do with anime. Gameboy was released initially in Japan and some of the most popular games on it were from anime shows. So in case you want to get an anime tattoo, but also don’t want it to relate to a specific anime, this Gameboy anime tattoo is for you!

In case you don’t want your anime tattoos to be super out there, then this Yu-Gi-Oh tattoo is for you. Only a true Yu-Gi-Of fan could recognize that this is the Millennium puzzle which is the strongest millennium item in this anime. For other people, this will be just an amazing tattoo design that can even be looked at as body art.

Anime tattoos are probably not for everyone. With their big designs and lots of colors, you will probably only be seeing these tattoos on real fans. In case you do decide to get one, we hope you found some inspiration in today’s article or maybe you even found the exact anime tattoo you want to do.