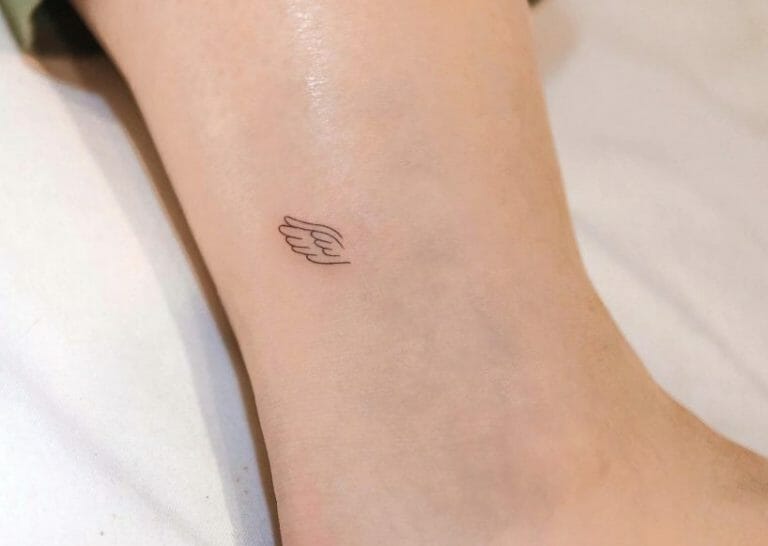 Are you willing to get yourself inked with a small angel wings tattoo? But you’re confused with the designs? Here we have trendy and small designs for y’all!

Angel wings tattoos are one of the trendy tattoo designs in the tattooing industry.

This design falls under the category of minimal tattoo design. People who love tiny designs usually get themselves inked with angel wing tattoos.

This tattoo has a very deep and impactful meaning. There are plenty of meanings like these tattoos represent freedom, hope, faith, and protection that can be associated with an angel wings tattoo. People also get themselves inked with an angel wing tattoo in memory of their lost loved ones who are in heaven and have found peace.

Angle wings are one of the most popular choice wrist tattoos that young girls and women want to get on their wrists. Tiny tattoos look good on the wrist skin. So if you were in search of a tiny angel wings tattoo on the wrist hen we have a perfect wrist tattoo design for you people!

In this body art, the tattooist has made a very tiny angel wing tattoo just on the wrist. Two wings are made up of fine black lines. There are curves in both the wings which shows that these wings are made up of feathers-like things. Just above these two wings, there is a small halo. The halo tattoo is made up of a black thin lime with a tiny heart and a few dotted lines.

The leg is another popular body part where people want to get themselves inked. And an angel wings tattoo on the leg has its unique meaning. Wings on a leg are often a symbol of speed in one’s feet. This tattoo is better suited for athletes who require swiftness in their legs. This tattoo is also reminiscent of the Greek God of quickness, Hermes.

In this leg tattoo, the tattoo artist has drawn a realistic small tattoo. Only a single angel wing is visible completely. The other wing is not completely visible because it is just behind the first wing. The first wing has many curves in it. The whole tattoo has been made with fine black lines. If you are willing to get yourself inked and do not want everyone to see it, then this is the perfect spot where you can have your angel wing tattoo.

Angel Wing Tattoo On Back

Back tattoos are quite popular in the tattooing industry. Most people like to get themselves tattooed right at the back. Here is an ideal angel wing tattoo for both men and women. Thus tattoo has two beautifully inked wings. There are four different sizes of feathers that are layered up one after the other and that gives the structure of the wings. The smallest feathers are on the top while the longest wings are right at the bottom. The wings have been shaded properly with the help of light and dark black shade. Just above the wings, there is a halo.

In this tattoo, the tattoo artist has drawn two angel wings separately on two different fingers. He has made use of the middle and index finger to draw the wings. There is an outer bigger wing and an inner smaller wing. Both the wings have many feathers in them which are depicted by the curves. The entire tattoo has been inked using black ink. There are a very minimal amount of designs in this tattoo and that is making it more attractive to the eyes. If you were planning to get yourself inked with a finger tattoo then this is the best design you can get.

Angel wing tattoos are mainly drawn with double wings but here we have a single wing tattoo design for you all. These tattoos are not only rare but also eye-catching. So this tattoo will make you the center of attraction!

In this tattoo design, the artist has tried to draw a semi-colon tattoo with the help of a single wing and a lotus. A semicolon tattoo is a sign of mental health. It also carries a strong message against suicide and addictions. Here the tattoo artist has drawn a lotus in place of the dot. And he has drawn a wing instead of drawing a comma. These two elements have a deep meaning of their own. And in this tattoo, they are adding more meaning to it. The entire tattoo has been done with a single shade of black. So if you are in search of a very rare tattoo piece then this is the ideal design for you!

In this angel wing tattoo, the tattoo artist has drawn the wings just in the center of the back. This beautiful tattoo has many small and big feathers attached to it. The feathers of different sizes are giving the tattoo a realistic look. Apart from this, the tattoo has been drawn with multiple colors. We can see the artist has made use of purple, light pink, and different shades of blue. If you are searching for a colorful Angel wing tattoo, then this design might impress you guys!

Some people love to wear tattoos like their ornaments. They love to flaunt it in front of the entire world. Hence a hand angel wing tattoo is best for these people. In this tattoo, the tattooist has tattooed simple angel wings along with a halo just above it. But in between the wings, the tattooist has inked the terms “maa” and “pa” in the Devanagari script, which literally meanings are mother and father. So this is a tattoo design that you can dedicate to your parents as they are the guardian angels in everyone’s lives.

Angel Wing Tattoo On The Back Arm

A tattoo behind the upper arm is a perfect place to flaunt your tattoo designs! Here is a ravishing angel tattoo design that you might love. In this tattoo design, the tattoo artist has made the left wing with a feather. Many small and large feathers are used to make this wing. Whereas the right-wing has been used with the help of many flowers and leaves. And this is making this tattoo design unique among all. This is a memorial tattoo as under the wing there is an inscription which goes like “always loved”. People get angel wing tattoos in the memories of their loved ones who are no more alive. It is a tribute to them.

An Angel wing tattoo along with a devil’s wing tattoo sends a powerful meaning to the world. It shows that the world is made up of both good as well as bad things. It is also a symbol of one’s inner struggle between the dark and bright side of life. Angels are considered to be the good creatures made by God and the devil is considered to be the evil creature made by God. Therefore getting yourself with this tattoo will remind you that on this earth there are both good and bad phrases that everyone has to overcome.

The neck is one of the ideal places to get a small tattoo. d a small angel wings tattoos will compliment you with every outfit you will wear. Hence we have selected the best tattoo idea for you guys.

There is an infinite number of angel wing tattoos in the tattooing industry. We could not include each design in this list. So here is a brownie point for y’all as we have added one more angel wing tattoo design list.