10 Best Inuyasha Tattoo Ideas You Have To See To Believe! 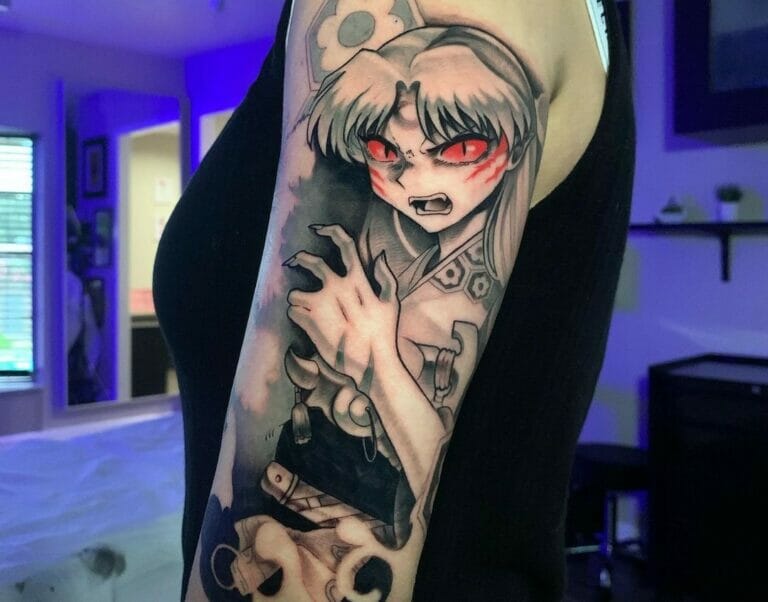 In search of the most eye-catching Inuyasha tattoo designs? Check out these amazing ideas and get inked with your favourite!

For quite a while now, Japanese manga and anime has been rising in popularity and so are anime tattoos, hand-in-hand.

One such genre of tattoo is Inuyasha tattoos, which are based on the famous Japanese manga by the same name. The series revolves around Inuyasha and Kagome, and a variety of other exciting characters who eventually join these two.

Inuyasha tattoos are created using a vast number of tattoo techniques, but the illustrative style remains to be one of the commonest. Additionally, Inuyasha tattoos are often associated with a variety of symbols that have some form of significance in the series. Sometimes, other kinds of patterns are also added to further enhance the look of the tattoo. So, Inuyasha tattoos hold a kind of versatility that has made them all the more popular among lovers of the series.

With all this handy information, you can now check out these eye-catching Inuyasha tattoo pieces that will simply blow your mind!

We are starting off big with this vibrant and colourful sleeve tattoo, featuring Inuyasha and Kagome. This tattoo is the perfect representation of the two characters, as the colouration is perfectly resembling how they are depicted in both anime and manga. Both Kagome and Inuyasha play pivotal roles in the series and this tattoo is the perfect homage to that. The design of this tattoo, with both the characters inked in opposite directions, is perfectly underlining the diversity in their characters.

Floral patterns can fit and look good in any kind of tattoo and this piece is proof of that. Here, another character from the series, Sesshōmaru, has been inked. This character also plays an essential role in the series and is highly feared throughout the Feudal Era, making him quite an exciting personality. This tattoo is a lot like a beautiful picture being framed, with flowers adorning one side of the frame. The colours used in this design are quite subtle and light, further adding a sort of tranquillity to the tattoo.

If you are a true fan of Inuyasha, you would surely be able to differentiate the characters just by looking at their outlines. So, picking an outline tattoo will not only let others know about your knowledge of the series but also let you know about the true fans around you. This outline tattoo is featuring Sesshōmaru. It is quite easy to understand his identity because of the coat and symbols on his coat here, which are a perfect recreation of what he wears in the series. Even though this is an outline tattoo, it is covering a considerable space on the body, so it will catch all the attention for sure.

If you want to get a small Inuyasha tattoo, then this tattoo idea should be your first and last choice. Inked on the wrist, this tattoo is featuring Kagome, which can be understood by the sword that has been inked here, which is always seen with Kagome. He is sitting on a floral crescent moon, which is forming the perfect ornamental addition to such a lovely design. Even though this tattoo is relatively small and not coloured, its beauty is amplified by the aesthetic nature of the design.

Kirara is a cute little Nemokata, which is a mythological Japanese animal. In the series, Kirara is Sango’s companion and a symbol of faithfulness. So, if you want an adorable tattoo to pay homage to the series, then look no further than this tattoo. The size of this tattoo makes it perfect for the arm or even the leg. The subtle outline and grey shading, with bold black detailing, is giving this tattoo the look of a sketch done by an experienced artist.

This geometric tattoo of Inuyasha and Kagome is a unique take on the two characters. Inked within two rectangles, both the characters are placed in the opposite directions, with a moon and clouds on top, and tiny floral patterns at the bottom. The line shading used is staying true to the fact that these characters have been taken from a manga series. While most people who opt for Inuyasha tattoos get inked with Inuyasha and Kagome, this design is a very unique representation of the two characters.

An illustration tattoo would be the most appropriate representation of Inuyasha tattoos, as it would be a literal depiction of the manga. This neat and clean design inked in a rectangular manner is a close-up of Sesshōmaru’s face. The tattoo has a ton of subtle detailing, which are all combining to create the perfect picture at the end. If you see carefully, there is a gleam in the eyes of Sesshōmaru, which is highlighting how brilliantly this design has been portrayed.

Inuyasha was a half-human and half-dog and some scenes in the series truly capture his intense and fierce nature. With this tattoo, you will be able to recreate that intensity on your skin. Even though the design is monochromatic, the skilled way in which the expression on Inuyasha’s face has been inked is truly doing justice to his personality. The demon eyes and sharp teeth, with the hand covered in blood, are all somehow looking all the more prominent due to the lack of any coloured ink.

This colourful and vibrant tattoo of Sesshōmaru is combining some of the most beautiful shades to produce a masterpiece. Firstly, the elliptical frame with patterns is the ideal outline for such a motif. To add to that, the depiction of the character here has been done to perfection, with every element being a true representation of his character. The colours in this tattoo are quite vibrant, even though they are pastel shades, so that is providing an additional aesthetic appeal to the piece.

The sword carried by Inuyasha has become one of the markers for the series. So, a subtle way of having an Inuyasha tattoo would be getting inked with that sword. As you can see in this tattoo, the sword is covering the entire forearm and looking quite realistic. The dark parts are in perfect harmony with the lighter areas in the motif, translating to a very realistic-looking sword that can be instantly recognised by any true fans of the series.

In conclusion, Inuyasha tattoo drawings have evolved over time and are trendier now than ever. So, if you are an ardent fan of the series, getting a fancy Inuyasha tattoo would not only be a great way of showing your admiration for this manga, but it would also help you connect with other fans. Leg, chest, shoulder, or arm tattoos can all incorporate Inuyasha designs and do justice to the piece. Here is a quick compilation of the different Inuyasha tattoo pieces-