101 Best Beetle Tattoo Ideas You Have To See To Believe! 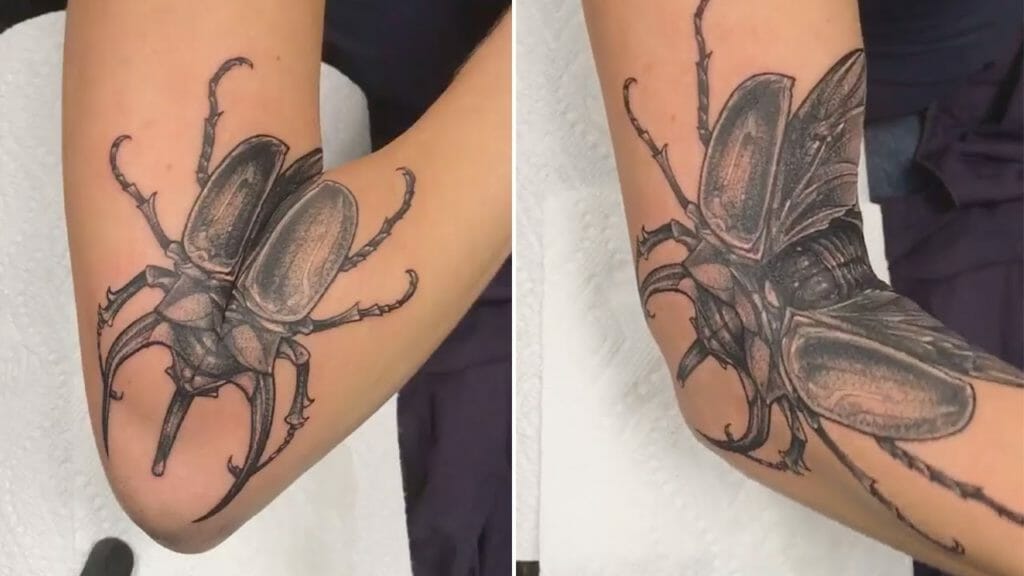 Tattoos of beetles have been popularized by both men and women, due to the symbolic meaning of the insect.

In some places of the world, the beetle stands for renewal, persistence, strength, and luck. On the contrary, it also has negative meanings like death and bad luck attached to it in other parts of the world.

However, those who get a beetle tattoo, do so to represent abundance, love, creation, immortality, strength, prosperity, and so on. The meaning of a beetle tattoo can be put under any or all of these categories, and ultimately, the symbolism of this insect relies on the person who gets the tattoo.

Read on to find the best beetle tattoo designs to get inked with!

In ancient Egyptian culture, the scarab beetle meaning was associated with immortality, transformation, resurrection, and protection. Hence, a scarab beetle tattoo with Egyptian designs and symbols is not only aesthetic but very meaningful, as well. In this detailed tattoo, the scarab beetle is inked at the centre of the arm, with the Eye of Horus at the top and a crescent moon at the bottom. The beautiful linework and intricate shading and detailing of the wings have elevated the whole design to the next level. You can also include an Anubis tattoo in this design as that stands for protection and the after-life.

If you want to cover an entire section of your body with an amazing beetle tattoo, then check out the image above. The floral motifs and the beetle has covered the entire shoulder and looks quite beautiful and unique. Tattoos like this one will become a statement piece on you. While this tattoo is done using only one ink, you can also opt for a coloured version of this same design.

Geometric tattoos make for very abstract pieces that look quite artistic. So, this design pictured above with geometric shapes will be a work of art on your skin. Additionally, don’t miss out on the parted skull that has been inked on the wings of the beetle. Out of the box ideas like this one is what makes tattoos stand out.

A lady beetle or ladybird symbolises different meanings, some of which are happiness, love, and luck. Though there are plenty of lady beetle tattoo designs, a realistic and small tattoo like this one will hardly take any time to create, but will stay as a reminder of all the positive elements in your life. You can get this tattooed on your arm as pictured, or even on your wrist or behind your ear.

Rhino beetles are symbols of strength and power. So, if you are in search of a beetle tattoo that reminds you to be strong through tough situations, why not choose this tattoo of a rhino beetle? Even though the tattoo is monochromatic, it still looks attractive due to the light and dark use of the same shade. The diamond shape surrounding the insect seems like the perfect finishing touch for the tattoo.

If you want a scarab tattoo depicting only the scarab beetle, use the image above as your reference. It is an outline tattoo, but still has a touch of detailing to make it more eye-catching. Such tattoos look amazing even when no coloured ink is used, as the design in itself is a masterpiece on its own. Tattoos like this one look great on the arm, leg, or back.

Stag beetles look like fascinating insects and a stag beetle tattoo like this one will do justice to that. The skilled depiction of the beetle and subtle dot work in this tattoo is simple and appealing in its own way. Tattoos like this are proof that less is more!

The colour blue is truly a royal shade and is often incorporated in different tattoos to make the design stand out. So, if you are in search of a tattoo that can combine a beetle and this majestic colour, the perfect option is right here for you. This tattoo looks quite creative due to the use of shades of blue which pair perfectly together. To add to that, the use of orange ink surrounding the beetle and the two green leaves makes the beetle pop out even more.

Just because beetles are insects, does not mean they cannot be included in sensuous tattoos and the image above is the perfect example of that. Here, a pair of lips is inked with bright red lipstick on it, and a beetle right next to it. The colours of the lips and the beetle create the perfect contrast. If you want a tattoo that not only carries a meaning but adds an oomph factor to your skin, this could be the perfect choice for you.

It might seem like most beetle tattoos are elaborate and include many elements, but for those who are more into minimalist designs, this can be an interesting choice. The tattoo is quite small and inked using only black. A tattoo like this one will not only take a small time to be done but will be your personal token of all the positive meanings associated with beetles.

To conclude, there are plenty of ways to represent a beetle tattoo on your skin. You may choose to associate it with the Egyptian culture, to further enunciate its symbolism among the Egyptians, or use different patterns and motifs with the insect. Beetle tattoos can be inked in any size or colour, and the different species of beetles are often associated with various meanings. With the help of this article, you will surely be able to find the right kind of beetle tattoo for yourself!