10 Best Colosseum Tattoo Ideas That Will Blow Your Mind! 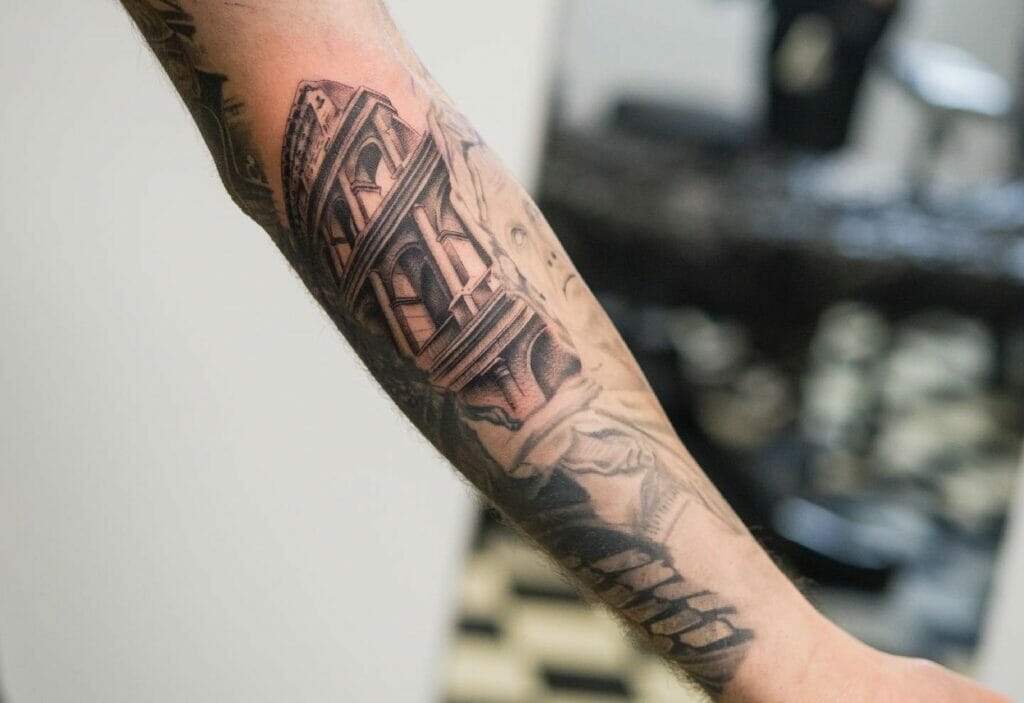 Want to flaunt your love for the ancient Roman civilization? This article has 10 mind blowing Colosseum tattoo ideas that you’ll love!

A coliseum is a stadium or amphitheater that hosts events of entertainment and sports.

The most famous coliseum of all time is the Colosseum of Rome which is one of the seven wonders of the ancient world. This magnificent architecture was also known as the Flavian Amphitheater and was completed under the rule of emperor Titas.

The colossal structure of imperial Rome is made of stone and concrete and was built by almost 60,000 slaves. This amphitheater hosted fights between people and wild animals and sometimes people with wild animals. Gladiators, though glorified, were slaves who had to fight till death for the entertainment of the audience in the arena.

Back then, the primary form of entertainment was mostly a fight between man and man and sometimes man and animal; the results were brutal. However, in the present day, the Colosseum is a piece of architecture we see with significant history attached to it.

The most popular aspect of the Colosseum in pop culture is the gladiator. Gladiators are warriors who represent courage, glory, and the willingness to face danger. If you feel like life is a battlefield and would like to imbibe yourself with the power of a gladiator, this article will do you justice.

If you have got the muscles and want to flaunt them, what better way than to get inked with one of the most famous symbols of power and glory?

The Roman Colosseum is an ancient architecture used for fights and entertainment. The gladiators were seasoned warriors who displayed astounding fighting skills and courage in the arena. This tattoo encourages you to face your fears, just like the warriors of Rome. It infuses you with the powers of the Roman gods and leaves you with colossal confidence!

If flexing your muscles during a workout gives you a rush of adrenaline, this Colosseum tattoo is a great option. The tattoo artist has cleverly inked it on the biceps for a more three-dimensional look when one moves their arm.

This Colosseum arm tattoo has a pop of color to add to the grim history of imperial Rome. While the Colosseum was a place of violence and bloodshed, it was a very important form of entertainment back in the day. Looking back at the Roman Colosseum’s violent history, it is undeniable that the colors and the life of a gladiator stood for courage and perseverance. These warriors would face death over dishonor any day.

The colors used in this tattoo stand for life and courage. The different shades of yellow and red with green accents are reminiscent of vitality and fervor. The grand Colosseum against he backdrop of the beautiful sun can be interpreted in two ways. It is what life echoes, the rising sun as a symbol of birth and glory while a setting sun represents the loss of life force.

This Colosseum tattoo has a profound meaning despite its simple aesthetics. If one tries to decode it sincerely, it is a great conversation starter that can lead to a philosophical discussion about life.

Gladiator Tattoo On The Arm

This gladiator tattoo screams courage and glory. Gladiators stepped into the arena, oozing confidence in this galea or headgear, ready to slay their enemy. This gladiator arm tattoo design uses mostly black ink with a dash of red in the crest.

This is a perfect warrior tattoo for those who consider winning every aspect of life as their driving force and are always prepared for a fight. The artist achieves realistic dimensions by shading.

Getting this tattoo design would be justified only if done on a fairly large area on the body so that the detailed artistic elements are evident. Arms and legs are great options to get tattooed on if you want this epic design inked.

The magnitude and architectural finesse of the Colosseum give it a special place in the world. It is truthfully one of the seven wonders, an epitome of grandiose.

This tattoo design embraces the essence of the structure’s amazing existence. The Colosseum is not just a structure; it is a culturally significant aspect of Rome and, by extension, of the world.

The gladiator Colosseum tattoo is monochromatic and captures the classical wonder’s architecture and what happened inside it. Streaks of lightning in the dark sky further enhance the aesthetic value of this tattoo.

The lion and the gladiator, a fight that would cause an uproar in the arena when it was functioning. This lion tattoo on the calf represents more than what appears in plain sight.

The lion and the gladiator are inked against the backdrop of the great Colosseum. This Colosseum tattoo envisages the conflict between the two warriors and the ultimate battle of survival. Gladiators who were sent to fight against wild beasts were specially trained to combat.

This is a great tattoo if you are always ready for combat, no matter who the opponent is. It is a great conversation starter and will depict you as an illustrious warrior.

Time is the one aspect of life we cannot cheat. The Colosseum of Rome has faced the wrath of the elements, robbed by pillagers, and broken down in several places, but it has made a place in history for eternity.

The transience of the physical form of the Colosseum is brought forth by this Colosseum tattoo design. The rise and fall of imperial Rome are expressed through this poignant tattoo.

This tattoo is a reminder that no matter how much glory we might achieve, it all fades over time. The temporal whip is something we all have to experience; it is greater than the fights in the arena or the cheering of the crowd.

This grave message is inked using black ink, making it more serious in appearance. If you are someone deeply philosophical and look beyond the obvious, this tattoo is made for you.

If you are a fan of Roman heroes, this cool Roman sleeve tattoo design will delight you.

This tattoo design has everything you need – thrill, action, and adventure. This design even dares to offer a live combat visual to satiate your hunger for action. Movies like ‘Gladiator’ and the ‘300’ made gladiators an icon in pop culture.

The cool full sleeve arm tattoo is like a story as things are graphically represented to an almost life-like quality.

This beautifully detailed Colosseum tattoo gives you a break from the stereotypical Colosseum tattoos. It almost resembles a bookmark in terms of structure and contains intricately colorful detailing.

Getting this tattoo inked along the spine makes a pretty picture. The style of art is oriental, with a blood red moon in the backdrop.

This tattoo incorporates elements of the Colosseum without seeming explicitly violent. It is a good choice for those who want to get inked with a Colosseum tattoo which stands apart while matching their aesthetics.

This tattoo truly lives up to its name among all the tattoo designs in this article. This colossal tattoo is much more than ink on the skin; it is the artistic retelling of the Colosseum’s glorious past.

The magnitude of this tattoo, both in terms of the space it occupies and the details of the narrative, outshines most conventional Colosseum tattoos. It shows the combat of man and animal and a gladiator holding up a severed head, all while the background has streaks of lightning.

This tattoo is by no means simple. The theatrical finesse achieved needs way more imagination than a steady hand to draw. The tattoo artist has achieved the epitome of narrative panache through this tattoo.

Getting this tattoo is not for the faint-hearted or twitchy. If you think you have a gladiator’s courage, just give it a shot!

This Colosseum tattoo is picturesque and compact. The frame and the ancient Colosseum against the sky with fluffy clouds lend it a postcard vibe.

The design of this tattoo is not common as it gives off a sense of serenity. The massive Colosseum looks like a dilapidated building, isolated from its long history of violence.

This tattoo is a great choice for you if you admire the Colosseum because of its scenic beauty and marvelous architecture!

Colosseum tattoos are awesome if you are a history buff. They allow you to frame history the way you want.

All of the Colosseum tattoo designs in the article depict a different side of its history, and this multifaceted description is what we need. Not everyone sees the Colosseum the same way; for some, the tattoo of the gladiator is a face of courage, the amphitheater is life, and the fight of a warrior represents struggles in life. It can be said that the Colosseum tattoo meaning is what life echoes.

Which of the Roman Colosseum tattoo designs was your favorite? You can always add your unique perspective or design elements to make it align with your thoughts.

Here are some more ideas for you to choose from.