101 Best Chucky And Tiffany Tattoo That Will Blow Your Mind! 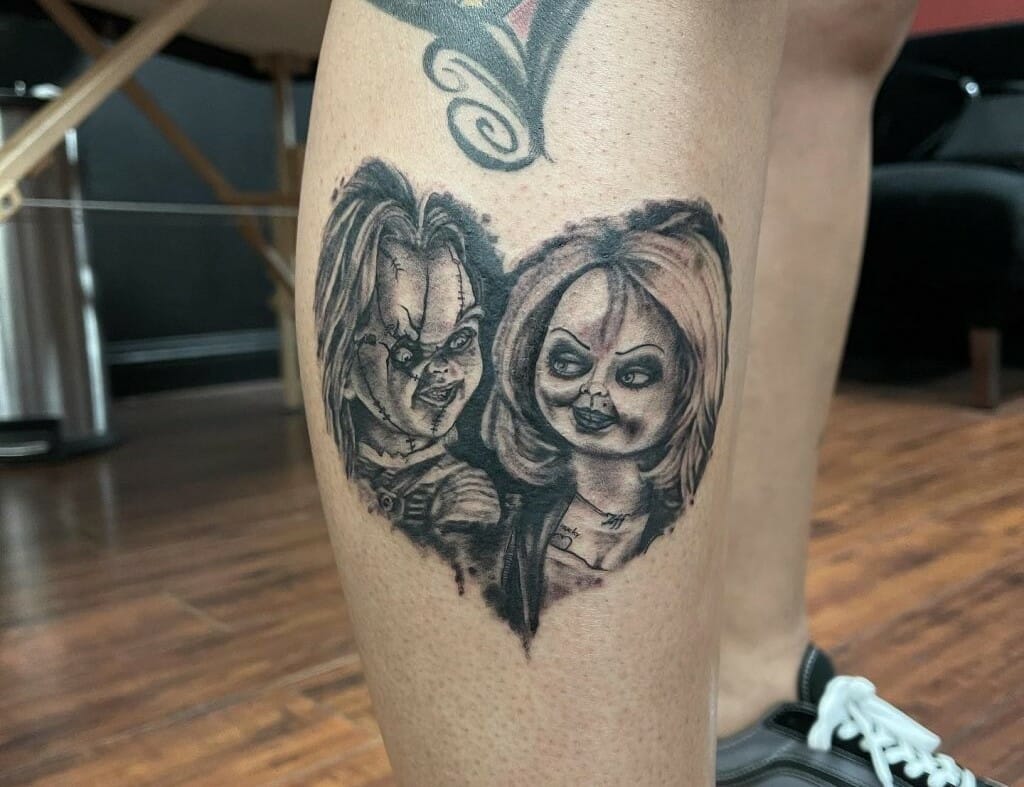 Are you an avid horror film lover hoping to find the perfect tattoo? End your search with our list of Chucky and Tiffany tattoo ideas to find the best tattoos!

The vicious duo is known for their creepy-looking appearance, committing heinous murders series after series. Nevertheless, the scary charm is what attracts many horror-movie buffs to get permanent and temporary tattoos based on the Chucky series.

From childhood to adulthood, dolls have been an imperative part of our lives. The Child’s play horror series took benefit of the wide popularity of dolls and played with one of our most feared dreams- demonic dolls- into something classic among movie buffs. Chucky is a demonic doll possessed by the spirit of Charles Lee Ray, who is a vicious killer. Chucky starred alongside Tiffany Valentine, who happened to be his love interest in the movie ‘Bride of Chucky’. The pair together starred in various sequels, narrating their vicious adventures within the body of dolls.

Chucky’s popularity in pop culture is awarded various accolades from critics and fans alike, making it a classic horror movie. It is common to see the pair from ‘Bride of Chucky’ as a Halloween costume, in fanmade artwork designs, and in other accessories related to creepy-looking toys. Chucky and Tiffany’s popularity as tattoo designs is pretty high among tattoo lovers who love to experiment with scary tattoo ideas. Tiffany-Chucky tattoos are available in permanent and temporary tattoos to flaunt your love for movies. Let’s take a look at some of these iconic Tiffany and Chucky Tattoos!

Chucky, usually known for its vicious side, takes over a gentle role with this temporary tattoo design, holding a bunch of colorful flowers and a dialogue box saying ‘I Love You’. People might see it as a regular, adorable doll extending love with flowers, though Chucky lovers would know how ironic the tattoo design actually is, adding to its fun part!

The tattoo takes over comic-style illustration, using vibrant colors, bold outlines, and shiny blue eyes that make it look straight out of an American comic strip. For movie buffs who would like to have their favorite Chucky movie on their arm but would also like to keep it a little less scary, this tattoo can be ideal!

Taking inspiration from the realistic Chucky doll, this tattoo pays homage to the Chucky movie in an authentic manner. To complete this sleeve tattoo, Chucky accompanies another horror icon Pennywise. Both the tattoos are created using intricate shading work in black and white, delivering a vivid real-life-like effect. The tattoo artist has done a commendable job of replicating the doll’s skin texture adding highlights in the right places, right from the doll’s cheek to the lifeless, plastic eyes. This creepy piece can be yours only if you visit an expert tattoo artist. Make sure to find the best tattoo artist in town to get yourself a realistic Chucky tattoo.

The tattoo describes Chucky in its full glory, flaunting a slate of his name with a bloody knife held tightly in his hands. Taking inspiration from the movie, the tattoo follows a cartoon-like style to keep the artwork a bit less scary. The tattoo artist has also used different shades of black and white, adding depth to its structure. Nevertheless, the cartoon style does not tame its frightening aura much as the doll still looks vicious enough to give the creeps to anyone.

The tattoo design unleashes Chucky’s frightening aura in its full form using a realistic tattoo style created with black and white ink. The tattoo intricately features Chucky’s facial characteristics, including scars, highlighted hair, a threatening smile, and an even more frightening stare. The enormous tattoo design easily covers the wearer’s sleeve and delivers scary vibes expected of such types of tattoos. The tattoo design is intricate and requires actual ink to fill in the details, so this cannot be replicated with temporary tattoos. Pair this tattoo with your Halloween costume and receive tonnes of assured compliments!

Chucky series is incomplete without mentioning his partner in crime and life Tiffany Valentine, his love interest and fellow murderous doll. The lovable tattoo is dedicated to Chucky and Tiffany’s love angle in the Child’s play series. The couple is known to have starred in the movie ‘Bride of Chucky’ and many sequels ahead, adding an unexpected romance to the series. The tattoo takes a similar theme and explores a beautiful illustration featuring the couple with a floral frame and knife.

As the floral addition elaborates on their relationship, the knife reflects the characteristics that make them similar. The colors used on the dolls make them look adorable, compared to what is usually served in Chucky movies. This is an excellent tattoo for couples hoping to get matching tattoo designs!

Adding another romantic Chucky tattoo to the list, we feature a Tiffany and Chucky heart tattoo design, staring at each other with a part-creepy and part-fond smile. The tattoo features a couple of dolls using black color and shades of Sepia, offering it a nostalgic, old-school feel. The ‘Bride of Chucky’ leads are a couple, and the tattoo makes it pretty obvious with the Chucky heart tattoo drawing. The simple tattoo design can easily be replicated with temporary tattoos using skin-safe tracing paper sheets, baby oil, a warm towel, and perfume in an excellent DIY tattoo.

Adding another temporary tattoo idea to your bag, we bring a beautiful Tiffany Valentine tattoo featuring a polaroid picture of Tiffany, with her hair and make-up done smoothly over her skin. The tattoo artist has used different shades of black to create depth while using the skin color smartly as Tiffany’s highlighted blonde hair. Women willing to get a gothic tattoo that compliments their Halloween costume or their edgy personality can go for this tattoo design.

Tiffany Valentine has many charming characteristics which make her an exceptional personality to get tattooed on your skin, whether temporary tattoos or permanent; getting a sassy Tiffany tattoo on your arm, legs, or back would bring you many compliments!

Tiffany And Chucky Tattoo For Back

Chucky and Tiffany are a serial-killer doll couple, notoriously famed for many cold-blooded murders, so what else can be better than illustrating them straight out of the movie, in their element! This tattoo features the doll couple wearing their movie costume, holding a gun, and pointing at whoever stands behind the tattoo wearer’s back. The tattoo does not have a traditional bold outline but uses vibrant colors to depict the character’s clothing, hair color, and facial expressions. Carrying a sim-realistic build, the illustration is close to how the pair of dolls are portrayed in the movie, exhibiting a similar scary vibe.

The creative Tiffany and Chucky tattoo seems to be encaged in a Tarot card-like structure, which creates a beautiful frame for the line work Chucky tattoo design. The featured art is created with a black outline without any solid colors or black and white shades to fill up the space. But, that does nothing to exhibit the glorious pair in their vicious form. The featured Tarot card structure is covered with leaves and stars to accessorize the frame to elevate its simple appearance.

Chucky’s portrait is best illustrated when showing off its scary facial features. The lifeless eyes are its highlight, which most of the Chucky tattoos explore. Similarly, this tattoo puts additional emphasis on the doll’s eyes, coloring them blue, in contrast to the entire portrait containing shades of black and white. The tattoo artist managed to highlight a realistic side of the horrifying doll with human-like facial texture, features, and highlights.

Horror lovers can explore our broad Chucky and Tiffany tattoo styles from the images given in the list. You can either pick the tattoo as it is or select individual components to compile and create a whole new personalized tattoo for yourself. You can also explore a few more Chucky tattoo ideas mentioned below to include on your tattoo bucket list!

What is the meaning behind the chucky and tiffany tattoo?

The meaning behind the chucky and tiffany tattoo is that they are a perfect match made in hell. They both have a love for killing and mayhem, and they are often seen together in the horror films. This tattoo is a way to show your love for these two iconic characters.

How did you decide on the placement of the tattoo?

I decided on the placement of the tattoo because I wanted it to be seen. I placed it on my upper arm so that it would be visible when I wear short sleeves.

How long did it take to get the tattoo?

It took me about an hour to get the tattoo. I had it done at a shop in my hometown and the artist was very quick.

How much did it cost to get the tattoo?

I paid $60 for the tattoo. I think this is a fair price considering the size and placement of the tattoo.

What are some chucky and tiffany tattoo design ideas?

Some chucky and tiffany tattoo design ideas include: