10 Best Chucky Tattoo Ideas You’ll Have To See To Believe! 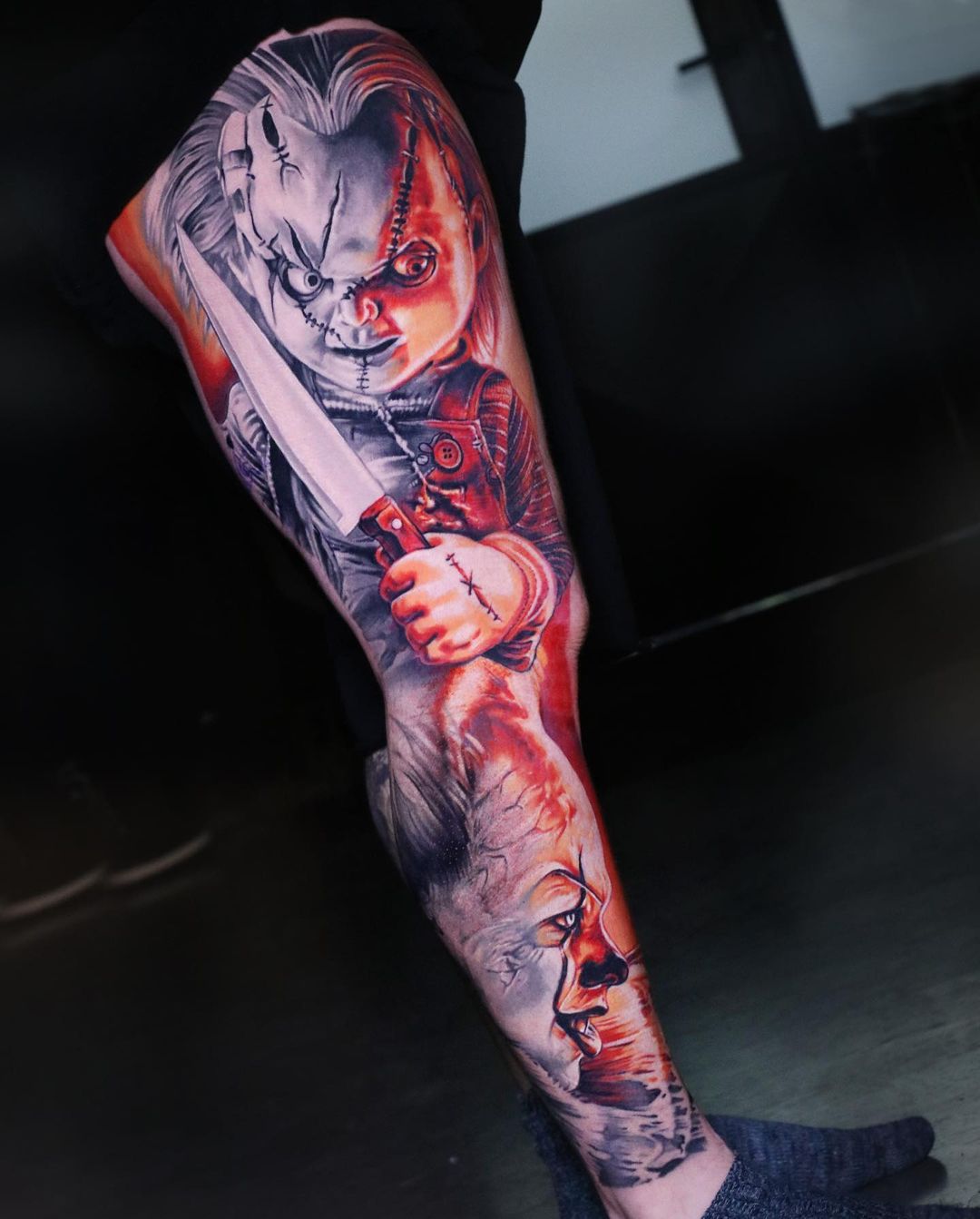 Want to get inked with a fitting Chucky tattoo that perfectly captures this horror movie franchise? Keep reading to find the best Chucky tattoo designs!

Chucky is a doll and one of the most famous horror icons, belonging to the Child’s Play horror movie franchise.

Even though Chucky’s character has brought all the creeps and chills, lots of people have been getting spectacular Chucky tattoos, that often look like art. The best part about Chucky tattoos is that they can be created in a variety of designs that have never been done before.

So, if you are a true fan of the horror genre and can never forget the brilliance of the Child’s Play franchise, a Chucky tattoo can surely be the perfect way to pay homage to that. That being said, if you just want your skin to get a touch of something creepy and scary, a Chucky tattoo is ideal for that too. Either way, with a tattoo of this character, those around you will come to learn about your fun side.

Continue reading to check out the amazing tattoos related to Chucky’s character. By the end of this article, you will surely find your perfect match!

In the film franchise, Chucky the doll was seen several times trying to kill people with a knife. So, a vibrant and vivid tattoo such as this one will be able to perfectly capture the murderous nature of Chucky. In this tattoo, as you can see, a butcher knife is reflecting a part of Chucky’s face. However, only a little part is enough to convey the monstrous personality of this doll. The bright red surrounding the grey, yet vibrant knife, is creating an eye-catching distinction. The way the word, ‘Chucky’ has been inked on one side of the knife, is making it look like someone has scribbled the world on the skin with blood. This tattoo design will be great on the arm as pictured. You may also choose to get this done on your back.

To truly capture the horror of Chucky, you might want to get a realistic tattoo that holds the potential to scare people away at a glance. As you can see in this sleeve tattoo, a complete portrait of Chucky has been done, covering the entire arm. Even though the tattoo has been created using black ink only, yet the little detailing and nuances of the character have been perfectly recreated. The way Chucky has extended his hand here is quite creepy and is certainly looking like the hand will come out of the skin any second.

If you would rather have a coloured realistic Chucky tattoo, then this one is a perfect alternative. Here, the doll is holding a knife and sporting his infamous creepy grin. The clothes worn by Chucky in this tattoo is the perfect rendition of how he was portrayed in the film. The perfect shading and tiny detailing are further enhancing the realistic nature of this tattoo.

The fourth instalment in the Child’s Play movie series was called, “Bride of Chucky“. In this movie, Tiffany, Chucky’s girlfriend was introduced. For a lot of people, this instalment was their favourite one, and hence, they’ve gotten a Tiffany Chucky tattoo to mark that. If you feel the same way, then you can get a tattoo that includes Chucky’s “bride” as well. In the tattoo portrayed above, both Tiffany and Chucky are depicted in a tarot card known as the “The Lovers”. The tattoo has been done in black ink only, but the varying intensity of the black colour is what is making this design pop out against the skin and look like art.

This tattoo is a more abstract and different take on both Chucky and Tiffany. Here, the characters have completely black eyes and are wearing spike collars, which are giving quite a grunge effect. The patches of red are further underlying the whole vibe of these two characters and the movie. Don’t miss out on the knife which has been inked to the side of Chucky and Tiffany, and forms an integral part of the Child’s Play universe.

Chucky In A Heart Tattoo

Given the horror perpetrated by Chucky, it would be difficult for anyone to love him. So, getting a tattoo with Chucky’s face inside a heart will certainly be paradoxical. Here, the design is done fully in black ink, with a little bit of white for some detailing. A tattoo of this kind will look best on the leg or arm. You can also get this inked on your chest.

One of the main features of horror movies that makes them scary is the interplay of light and shadow. In this tattoo, that concept has been captured perfectly. Here, half of Chucky’s face is hidden underneath the shadow, increasing the creepiness of the whole design. The subtle way in which this tattoo has been done is definitely nothing short of art. You may ask your tattoo artist to make this design smaller or bigger, depending on your preference.

If you have never been inked before and want to start off with a small tattoo based on Chucky, then here is an ideal option for you. A small heart with a knife piercing through it, and the word, “Chucky” has been inked. This tattoo is quite simple but is capturing the essence of the film quite well. You may include other elements from the franchise to give this tattoo a more meaningful look. A tattoo of this size will look appropriate on any part of your skin.

Outline tattoos are a fine way of depicting any symbol or character, without going overboard with the design. Check out this tattoo, for example. A simply black outline of Chucky, the doll, has been created. Even though the tattoo has no colour, it is still easy to recognise that Chucky is being portrayed due to the scars and the clothing. Chucky tattoos of this sort are for those who are true fans of this horror series and will instantly understand the identity of such a tattoo.

In the Child’s Play universe, the “Good Guy” toy company comes out with the line of dolls, one of which eventually turns into Chucky. So, a simple tattoo with their name can be a new way of showing everyone you are a true fan of this film series. In this tattoo given above, only the outline of the words has been done. However, you can make your Good Guy tattoo more colourful, or even include a small outline of Chucky to go with it, as well.

If you want an amazing Chucky tattoo, that basically looks like art on your skin, then you should look no further than this tattoo. Here, it looks like Chucky is peeking out from behind the skin of the wearer. The creepy expression on his face, a murderous look in his eyes, and bright red scars on his face are only highlighting the amount of fright this doll brought along with him. Such a tattoo is not only a perfect homage to the film but also a display of truly fine craftsmanship and artistry.

Chucky can be related to a lot of things, the last of which is “cuteness”. So, getting a cute Chucky tattoo can be an inside joke that you have inked your skin. In this tattoo, a young and baby-like version of Chucky has been designed, inside a colourful television. A design of this sort is certainly toning down the creepiness that usually comes with Chucky tattoos. The various colours used in this tattoo are adding a dose of vibrance and giving the whole motif a fun look.

Now that you know about the new and different kinds of Chucky tattoos, certainly, you are very close to getting inked with any one of these and forever get a mark of horror done on your skin. To make your process of selecting a Chuck tattoo easier, here is a quick compilation-