101 Best Wolf And Flowers Tattoo Ideas That Will Blow Your Mind! 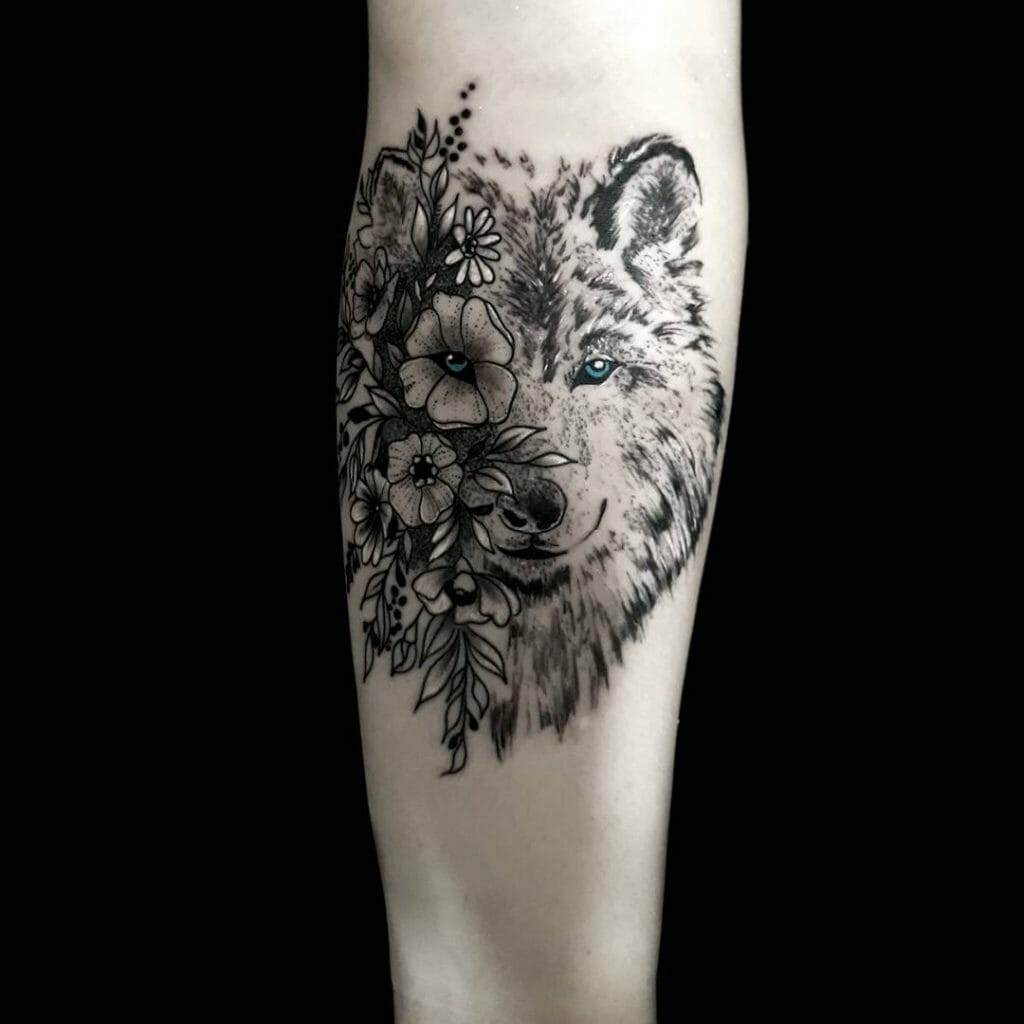 Are you looking for some amazing Wolf and Flower tattoo designs? These are some of the exquisite handpicked wolf tattoo designs for you to explore.

Wolf Tattoos are some of the oldest tribal tattoo ideas that have been very prevalent amongst various clans and tribes for a long time.

Wolf tattoos play a very significant role amongst the Native American people as it is a part of their culture and traditions. Wolves were seen as a sign of strength, courage, and good hunters which made wolf tattoos a favourite and common choice for tattoos, especially among men.

Wolf tattoos in general carry a rustic vibe and look amazing no matter done by which gender or age group. Wolf tattoo was widely a prevalent tattoo idea not only amongst the Native American men but among the women Native American women too. The female folk will prefer a she-wolf tattoo that showcases her feminine elements like devotion, spiritual strength, and loyalty.

Wolves are, from a primitive time, considered lucky animals by humans. Thus humans who believe in elements of life such as luck and fate consider a wolf tattoo an excellent choice for tattoos. In children’s stories such as little red riding hood, the wolf is shown as someone who is charming and a good hunter. Wolf’s tattoo ideas offer a huge amount of variety as these animals have deep bonds with nature and when paired with different elements, they hold different meanings. Wolf hiding behind flowers show their sneaky hunting skills, wolves howling in a pack shows mutual bonding and companionship, a wolf with the moon shows it is a nocturnal being, lone wolf howling or hooting can mean a spiritual signal, etc.

Different expressions of wolves can be crafted in a tattoo of a wolf recreating different moods and meanings. Most people opt for a monochromatic black or brown wolf tattoo, but one can also go for a colourful variety. Wolf tattoos are a wise choice if you have a long-lasting love for rustic tattoo designs. Here is a list of wolf tattoo designs with flowers that you can check out and choose from.

Flower In The Eye Wolf Tattoo

This tattoo consists of a wolf head whose left side of the face is partially covered with detailed ornamentals flowers and leaves. The left eye of the wolf has adorned a sizeable floret with a detailed leaf-like design in its petals. A thick ruff of mane has been inked with pattern-like shading. The hint of white stroke in the dark eyes of the wolf and a soft smile on the face of the animal makes this a unique design with a deep meaning. If wolves are your spirit animal and you want to ink a cool one, this is the design to go for.

This is a She-wolf tattoo inked in black. The She-wolf tattoo is a great symbol of beauty and strength. There are small floral and leaf patterns above the spirit animal that appears like a crown on the head of the she-wolf. Below the wolf is a full-fledged flower that has blossomed fully. The minute elements like the short fur of the wolf, the bold curves of the floral patterns with a neat outline, and the slow glow in the eyes of the wolf have been inked perfectly which makes this a great design for many women. If you are looking for a wolf tattoo that highlights your feminine characteristics, this is the perfect wolf tattoo for you.

This is a baby wolf tattoo festooned with minimalistic floral designs on the right. The wolf tattoo design has baby ears, small eyes, and minimal shading. A few leaves in dark shade are drawn here and there in the floral branch while the flowers are drawn with neat double outline strokes – thicker and bolder outer stroke and narrow and lighter inner stroke. The wolf has a broad baby nose and baby fur on its face. This tattoo is a symbol of innocence and simplicity. This tattoo of a wolf could represent stories of the early life of wolves as well as humans and thus it is an astounding family-oriented tattoo idea. If it is your first tattoo and you are willing to ink a wolf tattoo, you can definitely start with this design.

This is a tribal wolf tattoo with detailed features. This lone wolf tattoo is a symbol of a strong and independent personality. This forearm wolf tattoo is a flexible design that can be done with other parts such as the upper arm or the side of the back. A 3D effect is created with precise shading and fine lines. The deep eyes and dark nose showcase the mysterious nature of a lone wolf and its nature to avoid a wolf pack. If you are a loner and looking for tattoo ideas that point up that side of your nature, this is the best wolf tattoo idea for you.

If you are looking for a colourful design of a creative wolf tattoo with flowers, this tattoo is an absolute treat for you. This blue-eyed wolf is surrounded by a gush of purple petals is an absolute piece of art. The entire tattoo is in a shade of pastel colours, and the darker pink and purple combination of the bottom flower is complementing the complexion of the entire tattoo design. The pattern of shading of the tattoo is giving it the look of a watercolour wolf tattoo. The hints of black were used to mark the shadows along with the double outline and tiny facial hairs is done with white strokes. The symbol at the top is done in pink and green with white small dots spread throughout. If you are looking for a wolf tattoo with colours, this is one rare design you should definitely consider.

This is an immense wild wolf tattoo with an elaborative rose at the bottom. It is inked in deep dark ink with minute detailing throughout. The greenish-blue eyes are the highlight of this otherwise monochromatic black ink tattoo. The wolf has an evil smile that has been very expertly brought to light. The rose petals and the four leaves have been done with exquisite light and dark combination of shading, giving a lifelike finish to the tattoo. This tattoo will always stand out no matter inked in which part of the body.

This is a traditional wolf tattoo design with the right side of the wolf face hidden behind flowers and leaves. This holds the meaning that the wolf is peeking from behind a bush of flowers, ready for a hunt. The wolf has rich dark eyes with a hint of light that holds deep meanings. The fur is drawn in a texture similar to fire giving the spirit animal a unique look. The wolf looks like he has a deep connection and is calling out to someone silently. This is the perfect wolf tattoo for you if want a mysterious tattoo of a wolf on a mission with a little touch of the wilderness of the jungle.

This is an innocent-looking wolf tattoo with adorning wildflowers on the left. The tattoo has a soft golden brown hue. The ears of the wolf are on alert while the eyes reflect peace and tranquillity. This tattoo is an amazing choice for anyone looking for a simple wolf tattoo with neutral colours. This tattoo can be done on other parts of the body like the upper arm, the back, or the hip and still look good. The light texture of ink used adds to the features of the tattoo but if one wants to add on a few other shades, that can also be done. If you are looking for a wolf hand tattoo that matches with your demure nature, you should definitely go for this one.

This is a she-wolf hiding behind a flower bush tattoo design with add-on designs of two feathers and a decorative eyepiece. The bright green eye and similar color pattern on the eye-piece is making this tattoo a catchy one. Several floral patterns are added alongside the main flowers, extending the tattoo from the hip to the mid-thigh. This tattoo symbolizes royalty and is perfect for someone with exquisite taste in she-wolf tattoo ideas.

This geometric wolf tattoo design is adorned with flowers on all sides. The tattoo is done with an extra dark black ink which showcases that the wolf is a wild one, one that lives in a wolf pack and is a loved one amongst the blood relatives. The wolf is particularly inked with detailed shading while the flowers and leaves have a simpler pattern. There is a hint of red used in the nose and the cheeks of the wolf. The wolf seems to be in a state of thinking, which makes it a great tattoo for someone who claims to stay lost in their thoughts.

Animal tattoos are still a very common choice of tattoos and wolf tattoos are a favourite among them. Wolf tattoos always carry an aesthetic and tribal vibe with them and the addition of flowers alongside the wolf face shows a deep connection between these creatures have with nature.