A Man’s Guide on How to Wear a Scarf 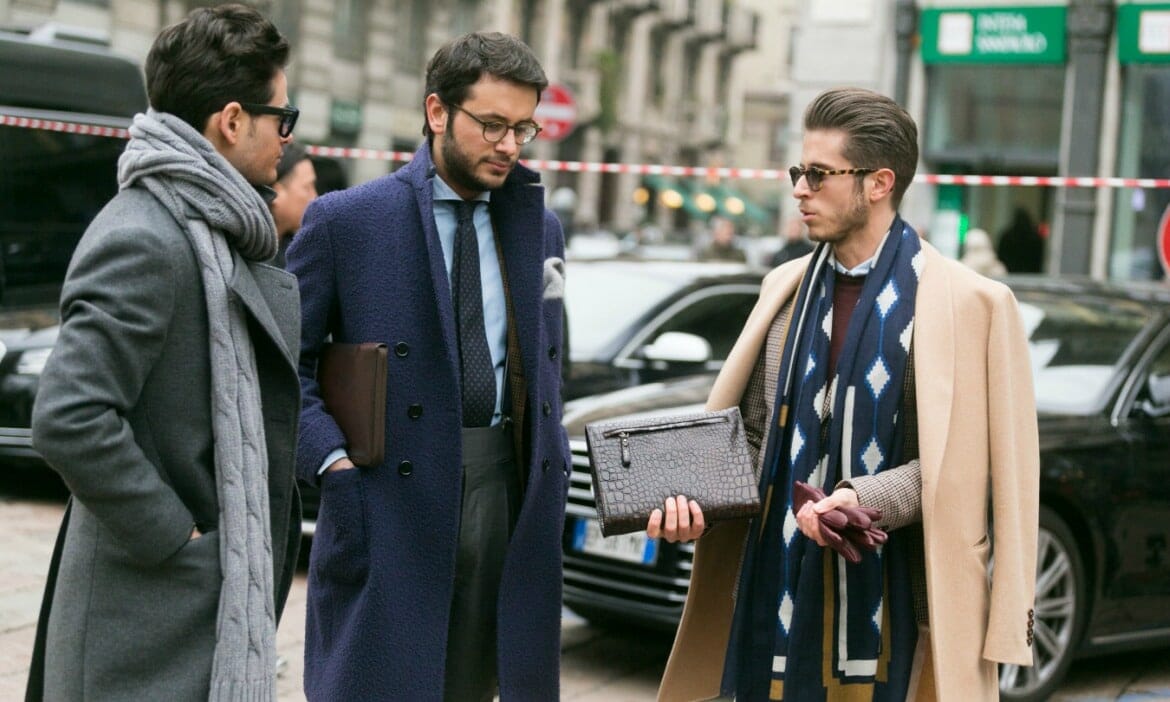 It’s an item that’s more versatile than you’d think, and and necessary for the winter months. Read on to find out six ways to tie a scarf.

If you want to learn how to wrap a scarf around your neck in the most stylish and simple ways then read on. We’ll show all types of scarves and every possible way to wear them. Whatever your look they’ll be a way to pull off this winter necessity.

How to Tie a Scarf

This ones easy, and probably the most common way to wear a scarf. If you’re unsure of how to tie a neck scarf, start out with the european knot. Just fold the scarf then drape it over your neck before putting the end through the loop. It gives a pretty chunky look, especially if you’re wearing it with a thick scarf, so try wearing it with a long coat, keep it open to avoid looking like you’ve got something hidden in your jacket.

How to Wear a Scarf – European Knot

So as we stated before it’s best to avoid close fitting outerwear if you’re opting for a european knot tie. A trench coat is a great option for smart and casual outerwear, and can be paired with a range of pieces. For a clean look that would go great with a plain black scarf, match a simple check shirt with a pair of slim fit jeans. Finish off with a pair of boots and you’ll have a relaxed yet put together look that’s perfect with a european knot scarf.

If you’re unsure of how to tie a long scarf, one of the options is to just not do it. There are different ways to wear a scarf and they don’t always require fancy knots and wraps. For the drape all you need to do is place the scarf around your neck and let it hang loosely down. This works well with a a range of scarves, and you can achieve a few different looks with it.

How to Wear a Scarf – The Drape

If you’re planning on smartening up a suit and coat combination, while keeping warm at the same time, then the drape style is a good option. You can easily achieve this formal look by picking a scarf in a thin material ensuring the overall look stays clean and streamlined. However, thick scarves are a good choice if you want to go for a more casual look and can be thrown over an outfit to achieve a relaxed, laid back vibe.

The once around is like the drape, but you have to do one extra task on top of that and throw one end of the scarf over your shoulder to fall on the opposite side. This is a good option if you’re dealing with changeable weather as you can easily tighten the scarf around your neck in colder temperatures, or loosen it in warmer ones. If you don’t want the hassle of a muffler scarf (or snood) then the once around wrap is a good alternative.

How to Wear a Scarf – The Once Around

The once around is such a casual scarf drape that it makes sense to pair it with a casual outfit. As it’s ideal for changeable spring weather pair it with a relaxed look that’s suited to that kind of temperature. An understated double denim look will work perfectly, so try matching a simple denim jacket, crew neck T-shirt, slim fit jeans and loafers together to create a laid back outfit.

Al Pacino rocks the look in Scarface, and it’s probably one of the fancier ways to tie a scarf. Not intended for a winter hike, the ascot knot is better when you use a thinner material scarf, so avoid wooly and thick scarves. This one requires a little more concentration when tying. Drape the scarf over your shoulders, then loop one side over and under the other, making sure to smooth it out so it has a neat finish. It’s one of the best ways to wear a scarf if you want to gain a classic, classy look. Generally it’s better to tie an ascot with a thin, silk scarf, but you can achieve a formal look with a thicker scarf as well.

How to Wear a Scarf – The Ascot

The ascot knot isn’t for someone who wants to blend in, and because of its soft, ruched appearance it’s really best suited to formal looks. However just because you’re going for a formal look doesn’t mean it has to be plain. Choose a suit in a clean cut, but allow yourself to experiment with different patterns and colours.

It’s the scarf move you make when you want to make a dramatic exit (although only in movies). Have your scarf in the drape position, then grab one end and throw it over your shoulder. It helps if there’s someone behind you who can get hit in the face with it. It gives a casual, laid back look and it’s good at keeping you warm, but allowing you to easily loosen it free if you get too hot.

How to Wear a Scarf – The Classic Flip

You can wear this ‘tie’ with any outfit as it’s really such a versatile look. However, as it gives a clean, sweeping look you might as well draw attention to it by choosing a scarf in a unique pattern or colour, in which case you’ll want to keep the rest of the outfit neutral so as not to create a clash.

How to Wear a Neckerchief

Now, on the whole neckerchiefs have a bad rep, but there’s no real reason for the hate. You’re essentially dealing with a thin short scarf that can be tied in a variety of ways to create a number of looks. Done correctly a neckerchief can add a boost of personality to your outfit and leave you looking stylish and unique, but not like a cowboy. Just how there are many different ways to wear a scarf, there are just as many ways to wear a neckerchief. If you’re looking for a mens summer scarf that will give your outfit a boost then the neckerchief is the ideal choice.

If you’re planning on pulling off the neckerchief, there are a few things you should learn such as how to tie a square scarf. Generally neckerchiefs come in a simple square design and need a little bit of folding to wrap evenly around your neck. You can go for a number of knots, from the classic front knotted look, to the sleek wrap around, where the knot is hidden under a sweep of fabric.

It’s best to pair a neckerchief with a simple, tailored outfit, as the overall tie is eye catching enough and you don’t want your outfit to compete too much with it. Stick to shirts and well fitted chinos, paired with some simple loafers to achieve a smart, preppy vibe.

Your Quick Guide on How To Wear a Scarf

Mens scarves can be hard to get right, but once you get a style that suit you and you perfect the way to tie it then you’ll wonder what you did without them. Learn how to fold a scarf correctly and not only will you have something to keep you warm but something that gives you an effortless boost of style and personality. Who needs jewellery when you have a good scarf?