10 Best Wonder Woman Tattoo Ideas You Have To See To Believe! 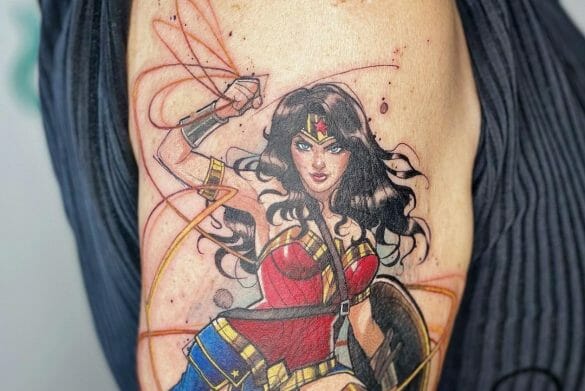 Wonder Woman is a symbol of truth, justice, and equality.

Wonder Woman is an immortal warrior and goddess. The iconic DC comic character stands as one of the most popular superheroes in the world.

The character of Wonder Woman made its first appearance in DC comics at the beginning of 1942, drawn by the artist Harry G. Peter. In comics, Princess Diana aka Wonder Woman is a fearsome warrior from the land of Amazon; she is the daughter of Zeus and Hippolyta. Over the years, she has been paired up with other iconic DC Comics characters, such as Superman, Batman, Flash, and Green Larsen. Princess Diana has made multiple appearances on television in DC animated series. The television appearance expanded further when DC Comics decided to launch the DC universe for films and make Diana one of the essential characters of the universe. In the DC films, Wonder Woman is seen with other classic Justice League characters.

Wonder Woman Tattoo With The Lasso

This is a traditional wonder woman tattoo design inked only in black and white. This wonder woman tattoo does not show Diana’s face; however, it shows her wearing her outfit from the comics: a golden tiara, red bustier, and blue underpants. The tattoo design also features her iconic lasso, the weapon of truth. Wonder Woman’s lasso is magical; it cannot be broken or cut. Her lasso can stretch to unimaginable lengths and can incapacitate her enemies. Generally, Wonder Woman tattoos are colorful, but the tattoo artist has taken the approach of inking the tattoo in black. It indeed looks incredible! Consider getting this Wonder Woman lasso tattoo inked on your arm or leg.

Here, the tattoo artist has inked a scene from the film Wonder Woman (2017). This Wonder, woman tattoo design shows Wonder Woman using her magical bracelets. Wonder Woman’s magic bracelets are known as Bracelets Of Submission, and they represent the shackles the people of Amazon had to wear when they were enslaved to humankind. The bracelets are made from Zeus’s shield and work as a defensive item for Wonder Woman, allowing her to deflect bullets and other things. This tattoo is directly taken from the film, and the quality is top-notch! As seen in the image, this Wonder woman tattoo makes for a lovely full-arm tattoo sleeve, due to its sheer size and detail.

This tattoo is inspired from the Wonder Woman Film and features the actress playing the role of this Amazonian warrior. In this wonder woman tattoo design, we can see Wonder woman holding her shield, one of her primary weapons. Wonder Woman’s shield acts as a defensive weapon and can also be used by Wonder Woman to attack her enemies. One of her signature moves is bashing her bracelets on her shield to create energy that takes down her enemies. For Wonder Woman fans, this realistic black ink tattoo is a great choice. It looks cool here placed on the arm.

The Mother And Daughter Tattoo

This Wonder woman tattoo design links to an alternative universe in DC comics where wonder woman has two children fathered by Superman. Wonder Woman here is seen with her oldest daughter, who, according to the comics, is a little bit rebellious. In this tattoo design, Wonder Woman is inked with her traditional battle armor, holding her daughter in her arms. If you resonate with this motherly Wonder Woman or want to devote something to your own mother, get yourself inked with this tattoo and post it on Instagram to show your love for your mother. This colourful tattoo is placed on the forearm.

This cute-looking Wonder Woman emblem stands for a lot of things. The symbol symbolizes the power, strength, and courage of this Amazonian Princess and warrior. The open wings of the eagle have been combined with the abbreviation of ‘WW.’

You might be thinking, how much does the Wonder Woman tattoo cost? A simple, small, and cute wonder woman emblem like this would not cost you much, and it’s relatively easy and less-time consuming for talented tattoo artists. You can place this adorable emblem on the ankle, wrist or even the neck.

This wonder woman tattoo design features the actress from the older Wonder Woman films. Wonder Woman is the goddess of war as she spent a year of her childhood under Ares, who guided her. When Wonder Woman refused to slay the Minotaur, she lost the respect and favor of Ares. Her history with Ares turns out to be a turning point in future comics. After she kills her former mentor, she becomes a new goddess herself. You can search up on Instagram for more ideas to integrate with this tattoo design. This black and white wonder woman tattoo is quite detailed and would need a larger canvas, like the back.

WW And Other Superhero Emblems Tattoo

Wonder woman has incredible strength, agility, and speed. She is trained in expert hand-to-hand combat, can fly and can also talk to animals. The wonder woman in this tattoo design can be seen holding her lasso of truth with a ruthless look on her face. This tattoo is inspired from the animated series. You can integrate this design with a Wonder Woman shield tattoo or a Wonder Woman’s sword tattoo.